Have you ever wondered what it would be like to get the crème de la crème of historical greats all under one roof? To be transported, as a fly on the wall, to a time when celebrity was still a sacred and mysterious ideology? Well, to walk the red upholstered lobbies of The Gore Hotel, situated at 190 Queens Gate in the heart of Kensington and Chelsea, one would be met with the spirits of Scandal’s Past. There is a juicy lineage at work within these walls.

The guests to have ascended the entrance’s marble footsteps include the likes of The Rolling Stones, Judy Garland and- so the story goes- Her Majesty Queen Victoria. Of our present day sports, music and movie legends alike still recreate at The Gore Hotel. However, the hotel’s chic décor and palette of bottle greens, deep reds and coco browns date back to an era of timeless glamour and sophistication.

7:00AM. I awake encumbered by luxurious Frette Linen. Wheezing into reality I recall that I have just spent the night in The Judy Garland Room. Rumor has it that it was Miss Ruby Red Slippers herself who donated the very bed that I lay, well rested and dozy-eyed, upon. It was offered as barter for her unpaid bills. If only sheets could talk, I would be serenaded by Judy’s Golden Age show-tunes. Scrambling myself out of bed I walk, as if onto a stage, through red velvet curtains. I draw a bath using Penhaligon products homemade in England; above my lathered head resides a nude woman embellished in mosaic form.

10:00AM. Time for breakfast! My stomach impatiently churns. A slow jazz accompanies me into the critically acclaimed Bistro190. On the menu a choice of English, Continental Buffet, A la Carte, and Champagne breakfasts. A chandelier takes centre stage illuminating the Royal dynasties that reside in every corner of vacant wall space. 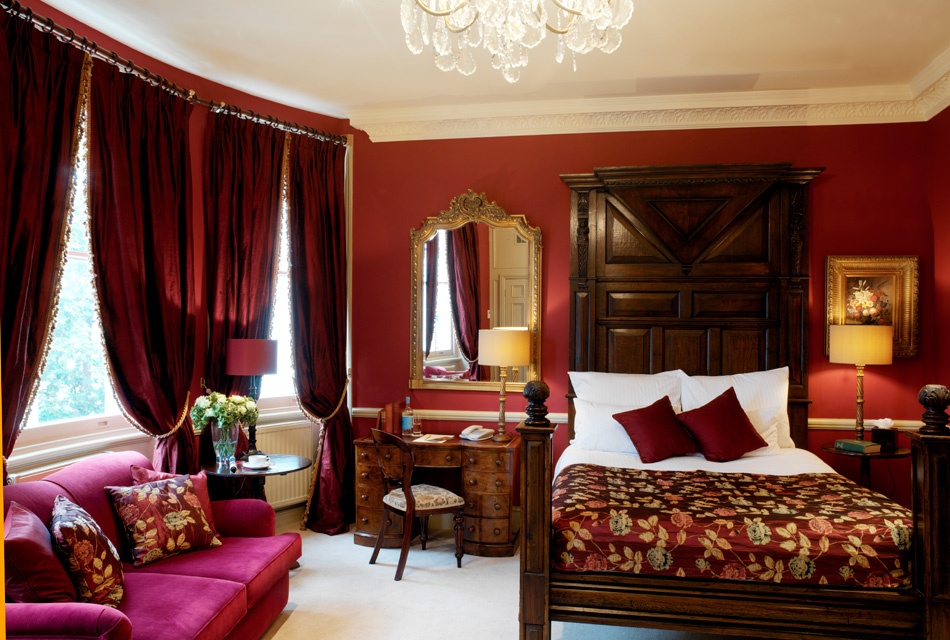 12:30PM. The Reception Hall is dressed with images of a young Queen Victoria. One image shows an Edward Oxford, the attempted assassin of Victoria and her consort. I ask the concierge for recommendations. The area, once donned Albertopolis, is largely affiliated with the Victoria and Albert era. Close by ‘The Victoria and Albert Museum’ known as one of the world’s greatest museums in art and design. ‘The Royal Albert Hall’, in relations with and a small walk from The Gore Hotel, venues some of the most talked about events of the year.

15:00PM. I take a sneak peak into the other rooms, I can’t help myself. The Tudor Room, the largest of the 50 rooms, has its own personal staircase. Over the fireplace Queen Elizabeth I resides surveying the room with stone-hard eyes. A secret door way leads you up to a real life Minstrel’s Gallery. Stained glass windows reflect onto the maroon velvet furnishings. I walk the hall to the bathroom. There is a toilet inbuilt into a wooden throne and bathe there is an antique golden rainfall shower.

18:45PM. I quickly change into something a little less comfortable then back to Bistro190 to grab a bite to eat. The waiter informs me that the Bistro was a strong springboard to a young Anthony Worrall Thompson in the 80s. I imagine him a little slimmer with a lot more hair. What to choose? I go with the Prix Fixe Menu. To start, Ricotta and spinach gnocchi with bacon hock dressing; for main, Pan-fried market fish, fricassee mushroom, bacon and chives. Delicious.

20:00PM. Taking a moment to reflect, I decide to read in The Green Room, the waiting room of the elite, which is painted an appropriate olive tinge. Pulling out the book from the shelving I half expect a secret passageway to unveil itself and uncover a faraway land. On the wall, to the right of the marble fireplace, hangs a painting of Dame Nellie Melba: Dame Nellie, a recurrent occupant at The Gore, was an Australian Operatic Saprano. Renowned French chef August Escoffier created several dishes in her honour, some of which can be sampled at Bistro190, such as a Floating island Melba sauce, poached fruits and crème anglaise.

21:10PM. Bar190- I have a cool Scotch on the rocks and bide my night absorbing the Gothic interior. The room was the birthplace to a fashionable trend of Medieval Banquets that took swing in the 60s and 70s. Scanning the room I’m transported to 1968-The Rolling Stones launch their ‘Beggars Banquet’ album. It all turns to shambles as Mick Jagger catapults a custard pie into a swarm of press. A war of custard pies is waged. The rest is history, encapsulated on the walls of Bar190.

23:00PM. I drag myself back to my room and think back to the colourful past of my present abode: The hotel was founded in 1892 by a Miss Fanny and Aida Cook- apparent second cousins to the British explorer and cartographer, Captain James Cook.

Originally the site was recognized as The Gore Estate, but got knocked down to make room for ‘The Great Exhibition’. It was here that Prince Albert showcased England to the world for its technology, steam and engineering. It was then rebuilt and since known to the world as The Gore Hotel.

The Gore Hotel experience is one of discreet and tasteful glamour. The style is quintessentially British evoking a Hitchcockian romance. Whilst, preserving each room’s unique antiquity, it still embraces modern components; such as, flatscreen TVs, stocked mini bars- you know, the necessities. Set within The Royal Borough, The Gore Hotel is a regal treat, which one must encounter if one wishes to truly liaise, or simply lounge in, luxury.

Book your own experience now here 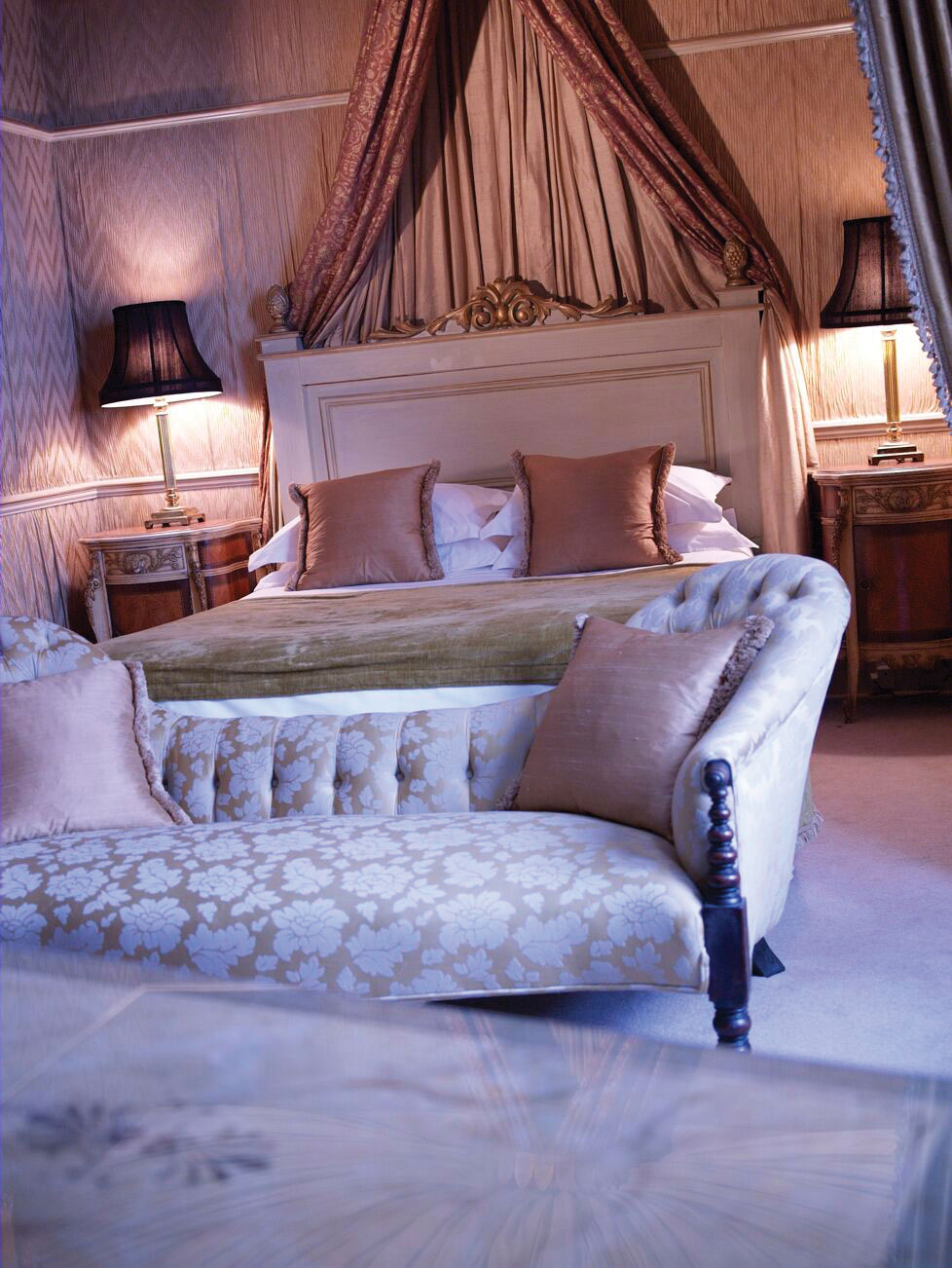