Creative duo JMP and Francesco Cuizza take us on a breathtaking journey of self-discovery with their debut fashion film “Warrior with a Crown.” Shot at dawn in the sandy shores of Malibu, California, “Warrior with a Crown” hauntingly portrays an inner fight, taking fear and failure as the conductive thread and choreography as a language.

Part of an on-going series, director JMP explains in a statement that “‘Warrior with a Crown’ is something different. We decided to work with voice-over in relation to body movements in order to engage the viewers and take them on an artistic inner journey. ”

After receiving accolades in the international film festival circuit, we catch up with one half of the creative twosome, model Francesco Cuizza, to talk about the film’s inspiration and what the future of the series holds. 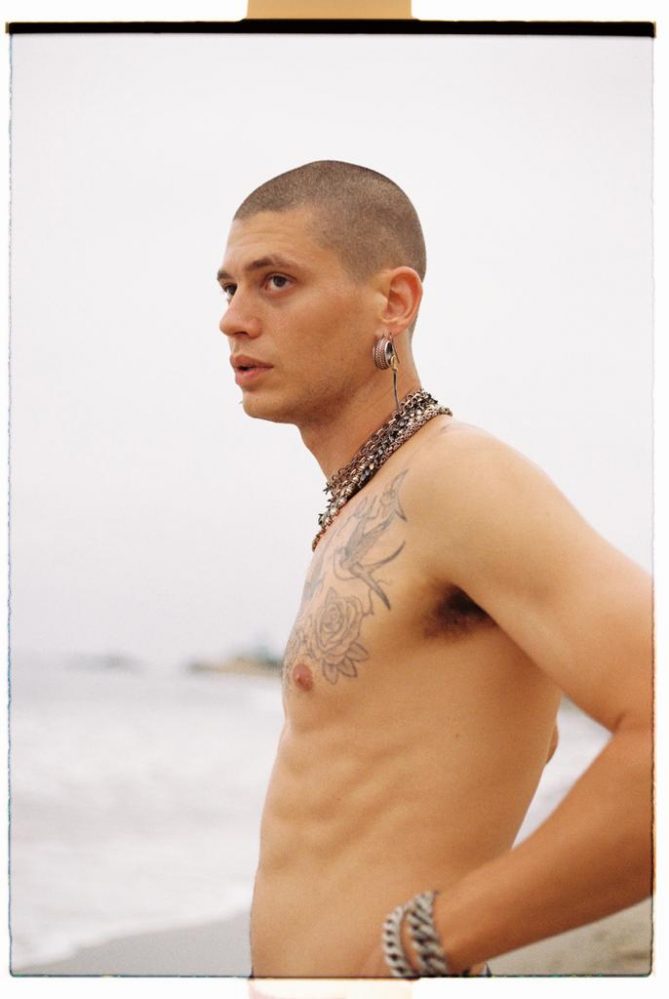 Why “Warrior with a Crown”? Where did you find inspiration for the film’s title?

“Warrior with a Crown” is a metaphor made up together with my mentor and friend Ugo Cacciatori. Fears, failures, negative thoughts, wrong states of mind — you must fight all of them back. There is a warrior inside all of us, and as warriors do, you just keep on fighting until you become a king yourself and earn your crown. The crown in the short is represented by all the rings on my hands.

Apart from starring in it, you also co-directed this film. When did you decide to step behind the scene? Is it difficult to wear the director and also the cast cap in the same project?

It’s all about your team. I shared my idea with the director and DoP James Pereira. He understood my vision, loved the story and message behind it, and decided to make it happen. There was perfect chemistry between us, so bringing the concept to life went smoothly.

Why did you decide to focus on fear and failure for this first instalment?

The message behind “Warrior with a Crown” is about rising from your failures, learning from your mistakes, fighting your fears and becoming a better version of yourself. Fears, failure, mistakes — these are experiences that we all have to through and that in some ways bring us all together.

How do you feel choreography helps to transmit this message?

I wanted to tell this story differently, trying to unravel it in a more artistic way rather than through a traditional narrative storyline. That’s why we focused on connecting the voice over with the choreography — a stream of consciousness and movements that reflect one another and convey the true meaning of “Warrior with a Crown.”

When did you decide to link up creatively?

I’ve always had a creative mindset since I can remember really. But you do have to decide which fields you’d like to focus on in order to develop this creativity. Then it’s just a question of being ready for it, and deciding when and how to start.

Can you give us an insight into the future of the series? What other themes are you looking to further explore?

The next topic will be all about the idea of invasion of privacy. We will touch upon different aspects of privacy, and how news and facts are being manipulated by the media system led by people’s interests and of course greed.