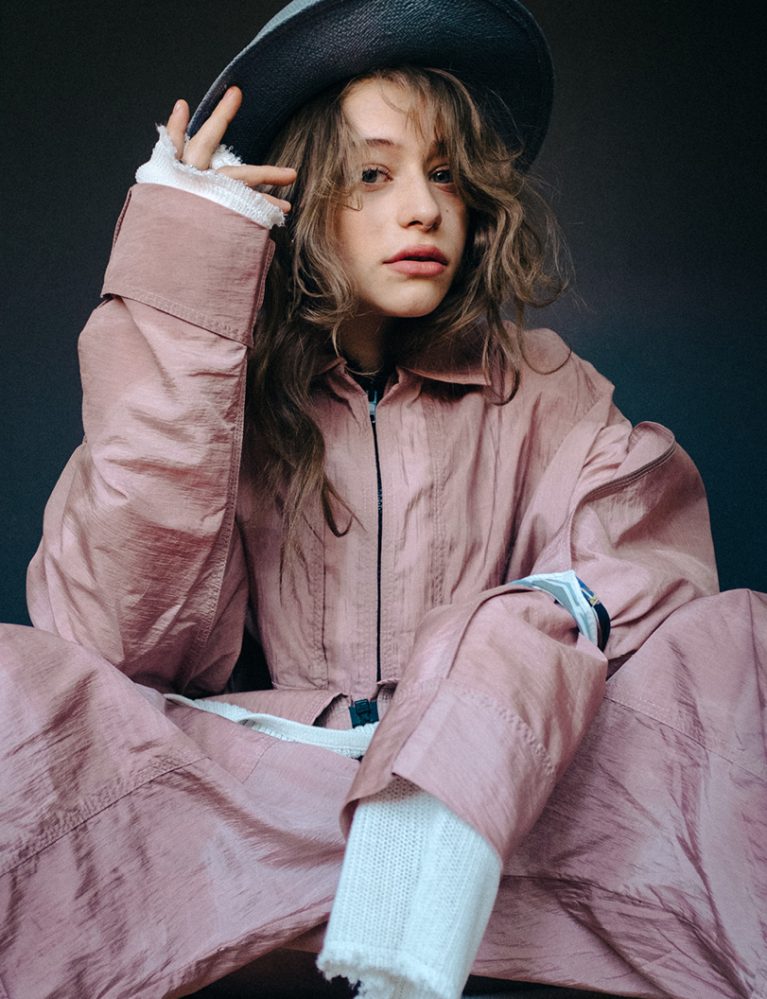 Odessa Adlon is a jack of all trades and a master of all — or at least that’s what she sets out to be. The middle child of prolific actress and writer Pamela Adlon, some may say Adlon was destined to follow in her mother’s steps, even if unknowingly, but her decision to step into the spotlight was very much intentional.

With passions spanning music, acting, and photography, it’s undeniable that the 18-year-old trailblazer is only getting started in her Hollywood quest. Despite her pretty reserved stance, Adlon oozes positivity when speaking about her career. After landing her first major television role in the Nina Dobrev-led sitcom FAM (after a direct callback no less) last year, Adlon is one step closer to her goal. News of a second season is still in the air, but Adlon hopes to remain in Shannon’s shoes for the foreseeable future — though she admits “she’s kind of a dick.” For the time being though, Adlon will continue showing off her comedy chops in the upcoming film SuperCool, but she hopes to get a chance “dive deeper into drama” soon enough.

To accompany our Schön! 36 photo session, we caught up with the actor in this exclusive online interview to talk about growing up in the Hollywood scene, the moment she realized she wanted to be an actor, getting to film in the same stage as That ’70s Show, and why her ultimate main ambition is “to get better at everything.”

You were practically born in the business and are surrounded by fellow actors in your family — your mom and sister Gideon… plus, you guys are very close-knit. How was it growing up so immersed in the industry and now having the support of your family as you embark into Hollywood on your own?

I definitely grew up being surrounded by the industry but not as intensely as I’m assuming you’re thinking [laughs]. I wouldn’t say we were “immersed” in it at all. It wasn’t a part of my life until my mom started to let me act when I was almost 16. And I had to do that all one my own — getting an agent, manager, getting to auditions, callbacks, test deals… whatever it may be, I did that shit bah mah self.

My mom is an actress — as you know — and has been since before I was born, but it was never thrown in me and my siblings’ faces growing up. It was just something she would talk about on career day. Being involved in any way was a rarity. Visiting her on set or going to any premieres, it wasn’t something I feel like she really wanted us to be involved in. And yes, my sister is an actress as well. We started acting around the same time actually so you’re right we are very close-knit… in that way… Yes! [laughs]

When did you notice you were interested in becoming an actor yourself then? Was it conscious or more serendipitous?

I wouldn’t say it was serendipitous, other than my mom being an actress. Well, I guess it was because I knew she was doing it. But also I’ve just always loved playing pretend, and making little stories up or acting like I was someone else — putting myself in another person’s shoes. That’s always been fun for me. I used to make up characters in the mirror when I was younger. I thought, if I had so much fun doing it alone it would be way more fun doing it with other people who enjoyed the same strange thing. I really noticed that it’s what I wanted to do when I was eight, I distinctly remember that. But my mom understandably didn’t want me to start acting until I was a teenager. So that’s what I did!

Are you looking to venture behind the scenes — be it through writing, producing, or else — in the near future?

I one thousand per cent am looking to do that in my future. I would absolutely love to. Writing and directing are two things I really would love to do. I used to make my own little movies. Back then I was the editor too! [laughs]

Staying on-screen for now, since earlier this year, you’ve been starring on CBS’ FAM opposite Nina Dobrev and Tone Bell. Can you walk us through the process of landing the role?

Yeah, I can do that! [laughs] At first it was just another audition I was gonna go to — something you do and then try to forget about so you don’t get upset if you don’t ever hear anything about it again. I was actually told I was coming back for a callback right after I finished the audition scene, which is something I think will never happen to me again. It was insane that never happens! So I completely focused all of my energy on it. Any callback at all is exciting and well, rare. There are a lot more auditions than there are callbacks. Then I got a test deal! Oh, something weird is I actually didn’t know it was for a sitcom until I did the test deal. I had had one test deal before and didn’t book it, so I wouldn’t have been shocked if I didn’t get FAM either but much to my surprise I got a network test and then a studio test and finally booked it. First series regular pick up! 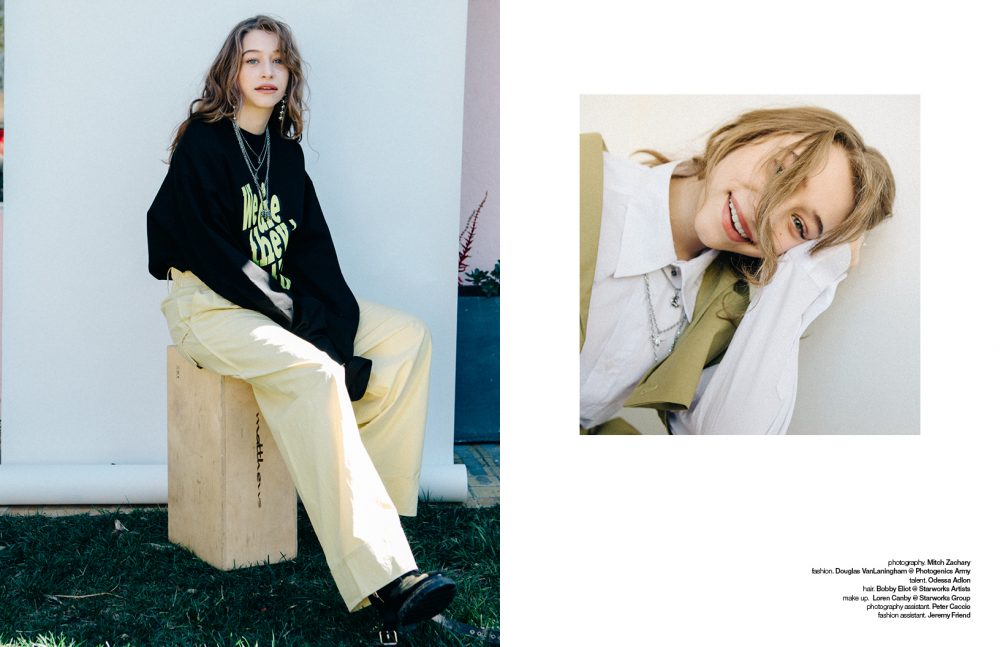 You did not know then but you know now that FAM follows the traditional multi-camera sitcom format and each episode is filmed in front of a live audience. How’s that experience been? Do you find the format challenging?

At first, it really got my heart racing. I was horrified. 400 people and dialogue? That’s really scary. But I started getting more used to it as we did more and more shows and it was a lot of fun once I settled into it. It’s like putting on 13 five-hour plays! [laughs]

You play Shannon in the series. How was it preparing for the character? Do you see any similarities with yourself?

At first, I did see similarities but now I can’t really say I do thaaaat much. She’s kind of a dick. I’m a dick too but she’s just mean and doesn’t care. I care about people more than Shannon does, I would say. And I really try not to be as harsh with people. Unless they get my harsh humour. Uh oh, I guess I’m kind of contradicting myself.

Do you have any favourite sitcoms?

The Office isn’t a sitcom but it’s just one of my favourite dry comedies. I’d say for sitcoms is That ’70s Show aaaaaaand That ’70s Show. I don’t really watch that many sitcoms, to be honest. But I do enjoy myself That ’70s show, which I recently learned was filmed on the same stage as FAM!!!!

Back to FAM then, would you want to do a second season?

FAM falls under the comedy umbrella. Do you have any preference when it comes to genre?

I don’t think I do. Every genre is so different I love all of them and have been lucky enough to have played roles in a lot of the genres. Hopefully, in the future, I can dive deeper into drama since I’ve just been able to experience a whole season of comedy.

What about medium, in terms of TV and film? Do you see yourself focusing on any of the two as an actor?

Do you have any other acting gigs lined up for the future?

Yes! Right now I’m working on this movie called SuperCool. It’ll be out before the end of 2019. It’s a comedy! A lot of fun and a great cast to work with.

Do you have a dream project? In terms of genre, director, actors, etc… Or is there any current project you’d like to be part of?

Oh god, I don’t know. There are so many people I would love to have the pleasure of working with. A current project I’d love to do would be Stranger Things, or Black Mirror, or Game of Thrones? But let’s be real… none of that’s gonna happen!

You never know! Apart from acting, you also have a band. How is it going on the music side?

As much as I love music, with acting it’s been hard to balance it into my life. That’s just at the moment, though. Talk to me next week and I might be jobless and jamming with my band! You really never know with acting.

Are you looking to venture into music professionally? Or do you see it as a hobby/passion?

I would love to have music be another profession. It will always be a hobby no matter what ’cause you can take music wherever you go. Whether it’s listening or playing. It’s one million per cent another passion of mine. There are a lot of things I’m passionate about but I have to say music, acting, and photography are the top three.

So what about photography then? You have a whole second IG for your film pictures…

It’s up there for me too. I love photography. That’s also a passion and a hobby of mine since you can take a camera wherever you go. But I would love to be able to do more professional scheduled and thought out photoshoots as well.

What are you most looking forward to in 2019 — acting, music, or otherwise?

In 2019, I hope to get better at everything. That’s what I’m looking forward to. And to work. I love working. I wanna work a lot. And have a good year. I hope we all do.

‘Fam‘ season one has just wrapped on CBS in the US and it’s now available to stream. Watch the trailer here.

Discover the full editorial in the latest issue of Schön!

This Schön! 36 editorial has been produced by