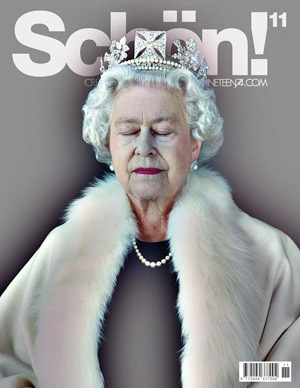 We’ve made our way to the ends of the earth and back again, pillaging and plundering and conquering all to bring you a treasure chest bursting with sparkling talent: from the boldly androgynous to the colorfully whimsical … with just a sprinkling of royalty.Our eleventh issue has been devoted to all that sparkles—and we aren’t just talking about jewels.

Her Majesty Queen Elizabeth II will be celebrating her Diamond Jubilee next year, and we are delighted to present an exclusive preview of the National Portrait Gallery’s touring exhibition of her portraits planned to commemorate it.  We are honoured to publish Chris Levine’s image of the most photographed woman in the world on the cover of Schön! 11.

Our fashion alternative to The Queen is the rising stars of the modelling world: we are proud to present an elite league of up and coming, not to mention extremely successful, male models in Issue 11: the gorgeous Willy Cartier and Stephen Thompson, who have campaigned for Givenchy, and Sebastian Sauvé, who was featured in the latest Zara campaign and shot by Dimitris Theocharis for Schön! 11, have enough talent to impress even The Queen.

Continuing in our royal theme, Saskia Reis interviews a queen of the stage: prima ballerina of the Staatsballett in Berlin, Polina Semionova.  And Thanassis Krikis presents “Home Alone,” an enchanting editorial spread with an air of melancholy nobility about it.

Back to art, we’ve discovered some hidden gems for you in Elena Bombardelli and Stephan Balleux: two painters from two different countries, both with an extraordinary gift.

I won’t spoil the fun by telling you all the secrets of what talent we have enfolded within our pages … but I will say you don’t want to miss Stefan Milev’s Little Red Riding Hood-inspired shoot, just in time for the upcoming film, the interview with Oscar and Golden Globe nominated Visual Effects frontrunner Alex Frisch, nor actress Lisa Edelstein’s candid conversation with Andre Da Silva about winning her first award and the price of fame.

Like the rarest diamond, Issue 11 of Schön! Magazine has been perfectly formed to bring you the best and brightest talent the world has to offer. We’ve filled our pages with the crown jewels of the creative world just for you, our loyal readers—only the best for the best.