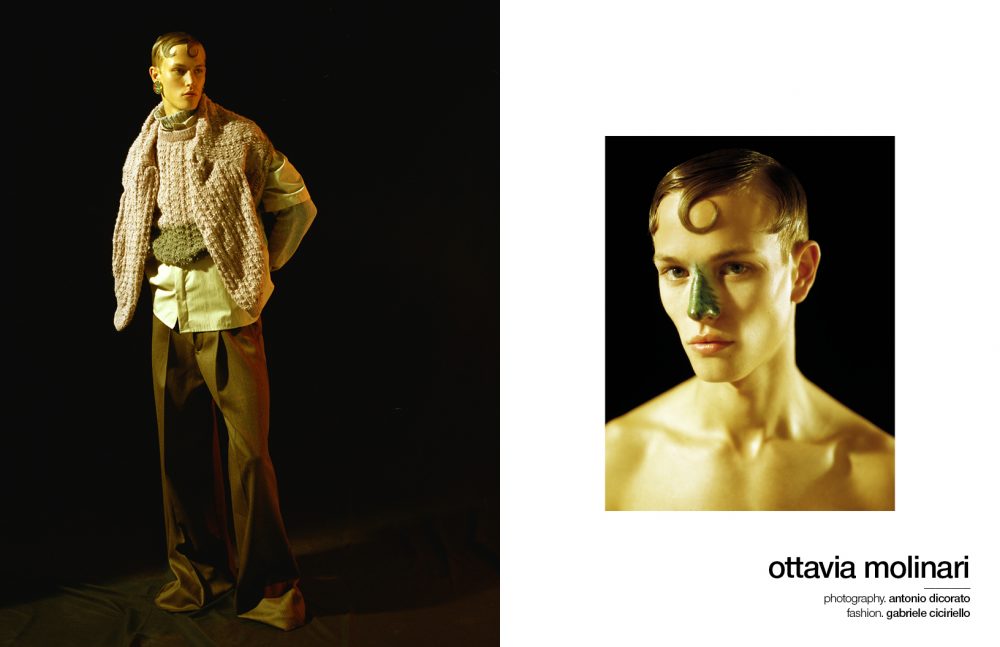 Inspired by the dishevelled, chaotic style of the labouring artist, Ottavia Molinari’s knitwear collection highlights a designer as committed to craft as her subject matter. The collection, entitled “Collezione di un Artista” — literally translated to ‘collection of an artist’ —  and its ethos are further enhanced by the work of stylist Gabriele Ciciriello in this photo series, shot by Antonio Dicorato.

For Molinari’s part, her efforts are beginning to pay off; she was recently featured in Vogue Italia following her Vogue Talents award win at Milano Moda Graduate 2019, and her collection has turned heads across a range of publications. To get a better understanding of her approach to knitwear as well as the motivations behind her collection, Schön! speaks to Molinari about her influences, the accompanying editorial, and more.

How did you begin with knitwear?

To be honest, the choice to dedicate to menswear and knitwear was totally random. Toward the end of my first year at Marangoni, I had to develop my second collection… I designed my first men’s collection; the inspiration was the aesthetic of Wes Anderson and his films. The collection that came out was very embryonic, but I immediately understood that it was my path forward. I had never been stimulated so much – I found myself drawing clothes that I could not experience in person. The range of pieces that a man can wear is limited, so I had a limited range of fabrics, colours and details. Consequently, precisely because I wanted to vary it as much as possible, I began with knitwear. I believe there is nothing more beautiful than a cashmere sweater and a white shirt; in my opinion, menswear cannot be deprived of these two elements. Thus vests, sweaters and turtlenecks have become the strongest and most experimental pieces of my collections. Ever since I was a child, my grandmother taught me to knit, so I simply tried to make a part of me and my childhood more fashionable.

You say you’re influenced by cinema. Are there any films or directors that have influenced this collection, and how?

The directors that inspired me in my collection belong to different eras and currents, but I think they have many common elements: we’re talking about Visconti and Guadagnino. The capacity of these Italian directors lies in contextualising the stories they tell through a photograph with an atavistic flavour. The viewer — Italian and European — recognises themselves in every single colour and “smell.” As a result, I redefined the palette of my collection by following the colours of films like Il Gattopardo or Call Me by Your Name. The choice of material also wants to define the contrast that their shots convey: velvets flanked by poplin, gabardine and tweed felted in the thread. 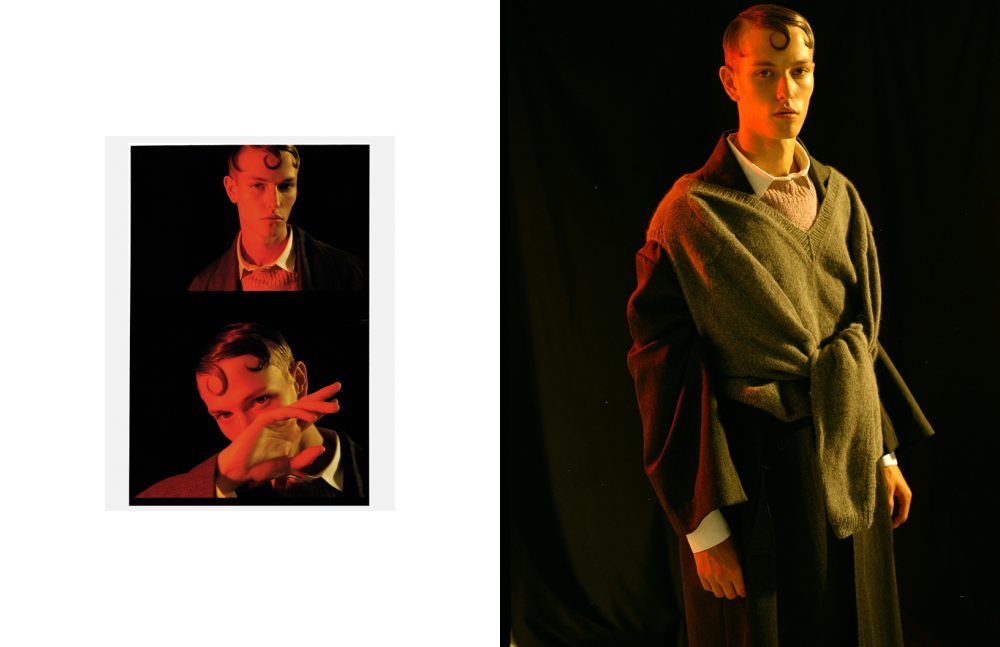 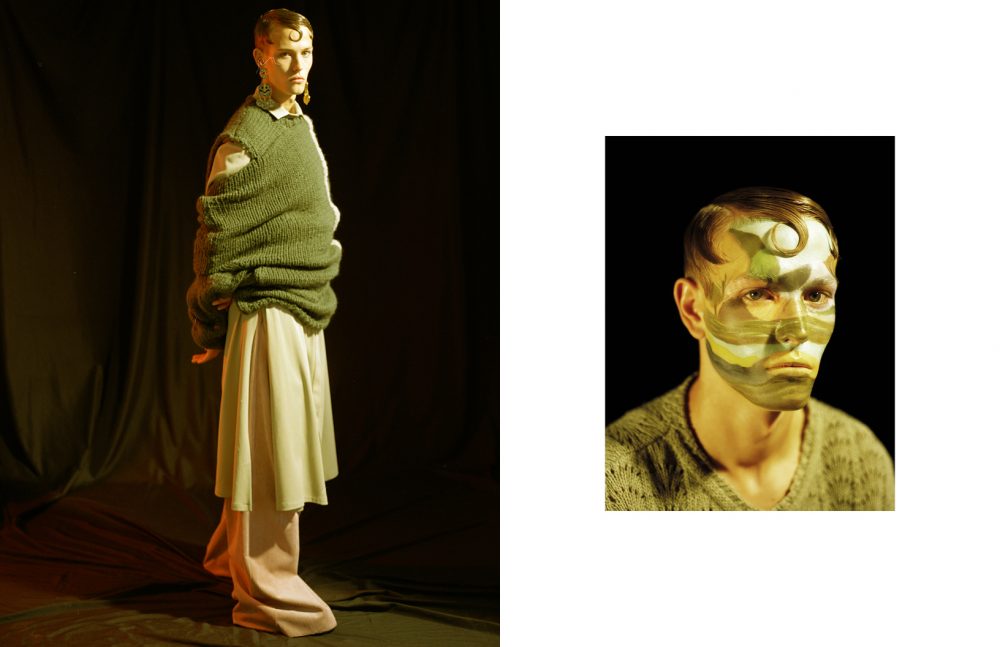 How does the name “Collezione di un Artista” relate to the pieces in this collection?

The collection, as mentioned above, was initially inspired by the atmospheres, flavours and colours of the films of Visconti and Guadagnino: very clear outdoor environments in contrast to interiors that resemble classicism, erudition and exude art. I wanted to investigate the figures that inhabit these worlds: the intellectuals, the bohemians, the artists. I studied, analysed and gutted the clothing of twentieth-century artists — Giacometti, de Chirico, Freud, Bonnard, Sudek — photographed by the greats, such as Avedon, Cartier-Bresson and Penn, at the very moment they create in their atelier. The sloppiness of their “uniform”, the untended sophistication of their clothing have become central to the development of my project. Badly buttoned shirts, exaggerated trouser lengths, uncontrolled volume. In the title, I wanted to explain not only the twentieth-century artist but also the dandy modern who ideally wears and recognises himself in my creations.

This series was shot by photographer Antonio Dicorato. What about their style did you think was perfect to shoot this collection?

“Collection of an Artist” was born from strong conceptual elements starting from a base that could be minimalist. In any case, in the end, the product was deliberately “ironic,” therefore, I needed to contextualise it in a clean and defined environment. The photographer with whom I decided to shoot was perfectly able to create a new and unexpected atmosphere around my clothes compared to the world from which the collection came. His style is recognisable in every photo, which leaves a retro and living taste.

Was there any specific idea or message you were trying to convey with this photo series?

The editorial has the task of reflecting not so much the idea of the collection, but rather of redefining, reinterpreting, making the photographed pieces their own. Many editorials distort the designer’s inspiration. In this specific case, the basic shooting did not have elements that recalled the worlds of Visconti, Guadagnino and the artists that inspired me. And here the message we want to convey returns: the man who wears my clothes remains crystallised in an aesthetic that he himself defines and tells, in environments that deviate from his everyday life. 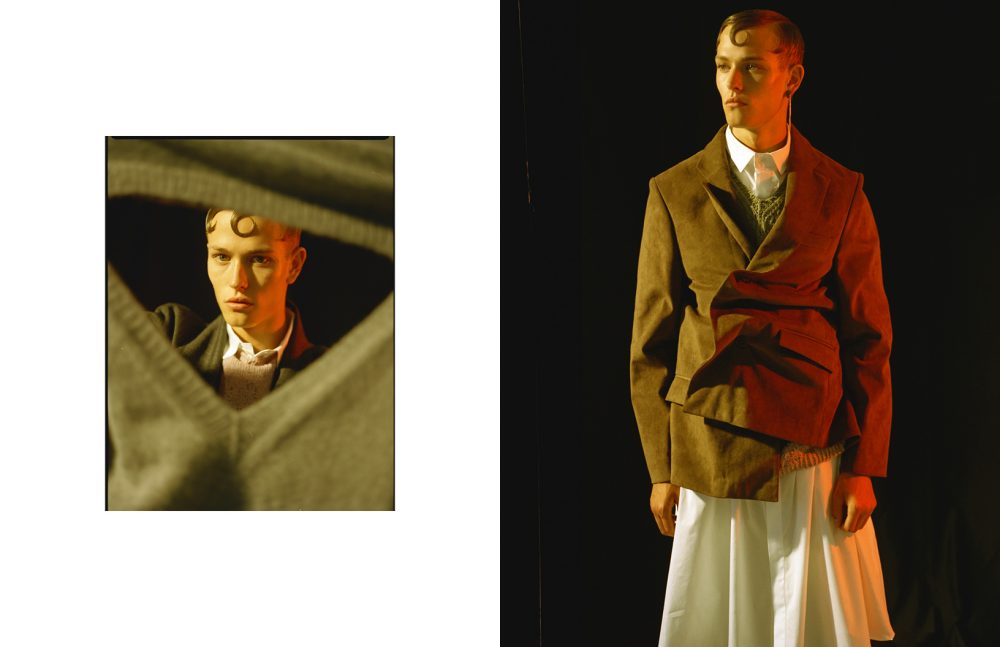 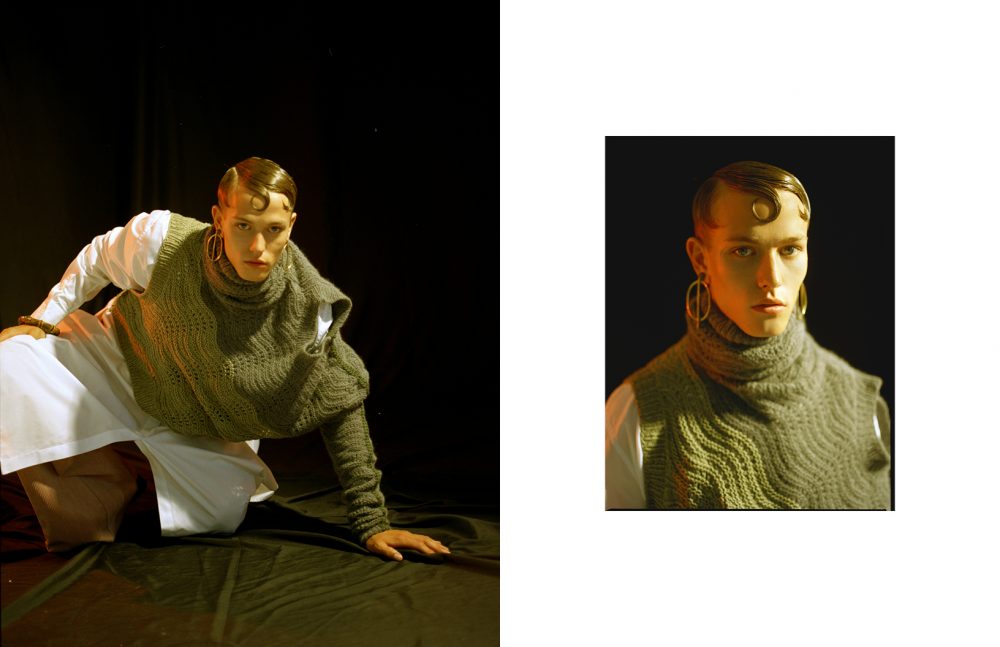 You won the Vogue Talents award at Milano Moda Graduate 2019. What was that experience like, and what do you hope to gain from it?

The victory of the Vogue Talents award was totally unexpected. I am very critical of my work and therefore I demand a lot from myself. This award has given me the confirmation that wanting is power, and above all the awareness that we must continually question ourselves and work hard to achieve our set goals. For the first time in a long time, I was satisfied, with the understanding that I am only at the beginning… I left more charged than before. The award consists of an editorial aimed at my collection, and I think this is the best way to make your work known.

Who are some people who have been helpful for you in your work and how did they help?

During the whole year in Marangoni in preparation for my collection, I was joined by wonderful teachers. The work they did started three years ago and led me to be the person I am. They helped me define my style, to know, to be curious. They corrected me when I was wrong and, above all, they let me be wrong so that I could become the designer I am. Furthermore, if the designs and the inspiration of the collection start with me, then this could not exist without the seamstress and knitter who followed me – wonderful women who realised something that only existed in my head. Working together, we have modified, built and broken up unique pieces. Finally, in general, I believe that teamwork is fundamental in order to be successful in what you do, even above all the advice of esteemed people – so from those who followed me during the shooting of my collection to my classmates, every single person indirectly enriched my work.

What can you tell us about the future?

I would like to be part of those women who are changing men’s fashion – I have in mind the Wales Bonner and Bode brands. To specialise and learn as much as possible in this sector is the first step toward achieving the goals I have set for myself. Although I do not like to plan my future – I believe in the fact that the great plan of life has already been written – I am obliged to give myself deadlines, small goals to be achieved from year to year so as to get closer and closer to the main goal. At the moment my priority is not to create my own brand; I am still too young and have very little experience. I would like to enter a style office first and grow both from a creative and a work perspective, and then one day maybe become Creative Director of my own brand – or not, this remains to be seen. One thing is certain: knitwear and menswear will always accompany me. At the moment I have no intention of returning to women’s clothing, but I may return one day. 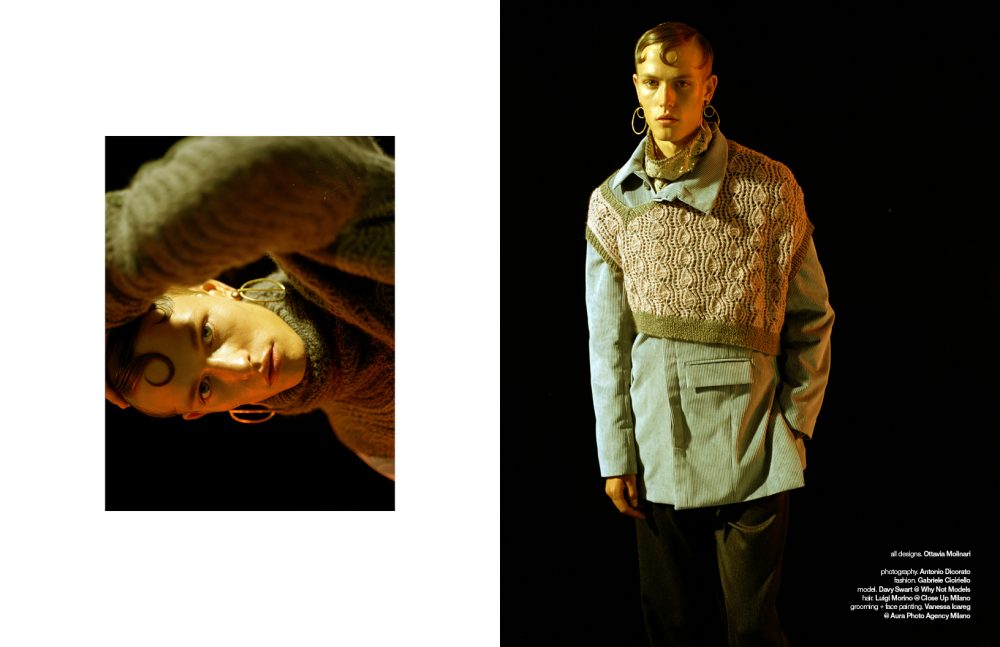