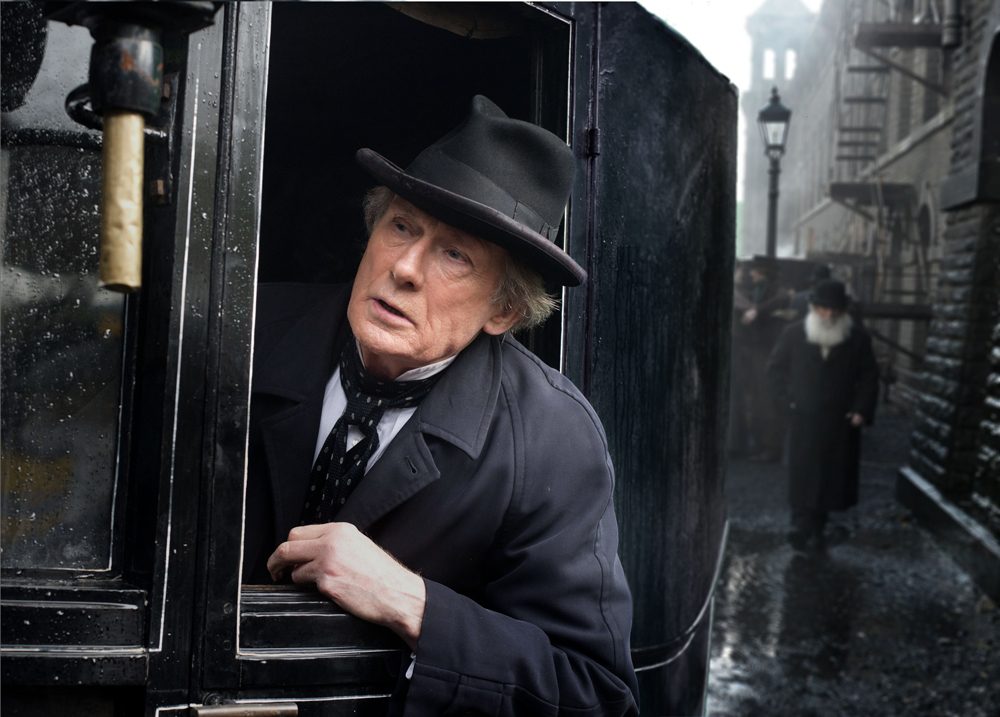 It’s 1880 and on the dark, dingy and dangerous streets of East London, a serial killer dubbed ‘The Limehouse Golem’ has been conducting a macabre string of murders. With no apparent pattern in the choice of victims and public panic mounting, Scotland Yard calls in Detective Inspector John Kildare (Bill Nighy) to act as its scapegoat in this seemingly unsolvable crime.

Kildare, whose career has been held back, it’s rumoured, because he’s ‘not the marrying kind’, is a good egg – a conscientious and caring cop determined to crack the case even though he’s aware he’s being set up as the fall guy. However, the detective soon becomes obsessed with young widow Lizzie (Olivia Cooke), a former music hall singer facing the gallows for poisoning her failed playwright husband John Cree (Sam Reid). Convinced that Cree is a prime suspect in the Golem murders (alongside, bizarrely, real-life luminaries George Gissing and Karl Marx), solving the mystery and saving Lizzie become one and the same for the inspector. 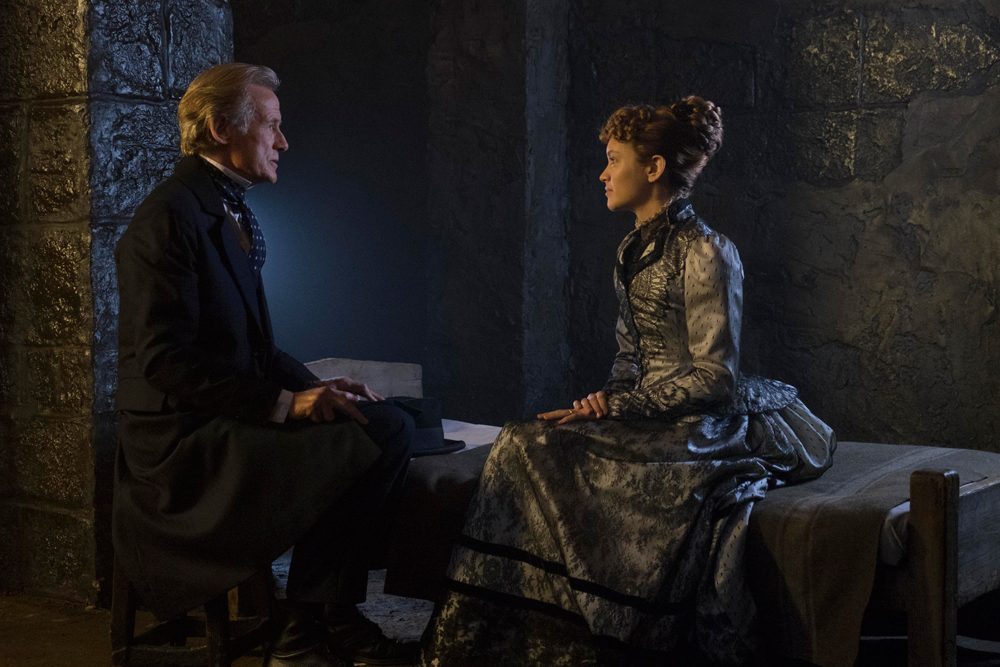 The story, adapted by Jane Goldman (Kingsman, The Woman in Black) from Peter Ackroyd’s 1994 novel, is told primarily through flashbacks, as Lizzie describes her journey from abused child, to music hall darling, to repressed Victorian housewife. Added to this, is the discovery of the Golem’s diary, the contents of which are dramatised with the various suspects acting out the grisly crimes.

Director Juan Carlos Medina (Painless) throws a lot at us in 108 minutes. One wonders why this wasn’t adapted into a mini-series, as there’s more than enough material to keep Sunday night viewers tuning in and rather too much for a feature film. The gruesome murders, where innocent victims are left barely recognisable, are shown in full gore and seem to belong more to horror flick fare. Then there’s the melodrama of the music hall, where on stage bawdiness meets back stage soap opera, with plenty of kink thrown in. No one is quite what they seem, especially when it comes to their sexual preferences. Scenes of courtroom drama highlight the inadequacies of the Victorian justice system, but elsewhere, there’s plenty of comic moments to boot. 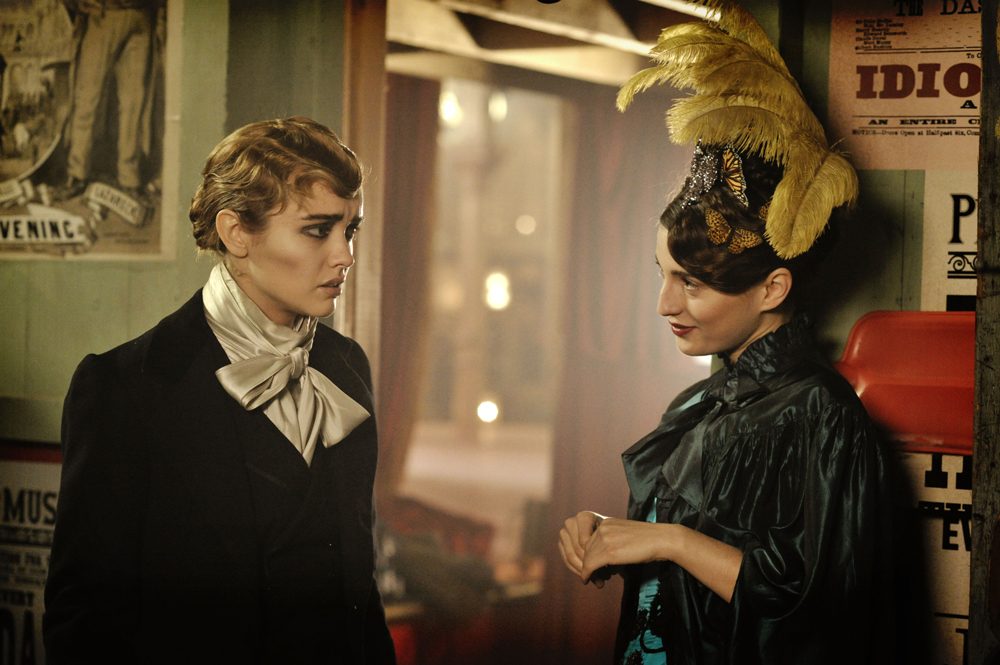 With so much going on, the movie could have been a mess if it wasn’t carried by such a talented cast. Bill Nighy, who tells us that he always wanted to play a detective, doesn’t waste the opportunity. Resisting the temptation to camp it up as in-the-closet Kildare, he gives a restrained and measured performance. However, it’s rising star Olivia Cooke who’s the real revelation, tackling the nuances of playing the ambiguous Lizzie with apparent ease. It’s refreshing also to find a female character at the epicentre in such a typically male dominated genre.

An impressive roll call of supporting actors, reading like the British contingent at a BAFTA ceremony, includes Bob Hoskins as Karl Marx, Eddie Marsden as seedy music hall manager ‘Uncle’ and Daniel Mays as Kildare’s loyal sidekick George Flood. Not all of them get to flex their muscles that much, as the story hurtles ahead at a racy pace, but Douglas Booth is permitted to show a depth and complexity as Lizzie’s mentor Dan Leno (another real-life Victorian), the drag superstar who never fulfils his dreams of becoming a serious actor. Aveline Ortega is also notable as Maria, Lizzie’s fiery and fiercely jealous rival, as is Sam Reid as the handsome but hateful husband. 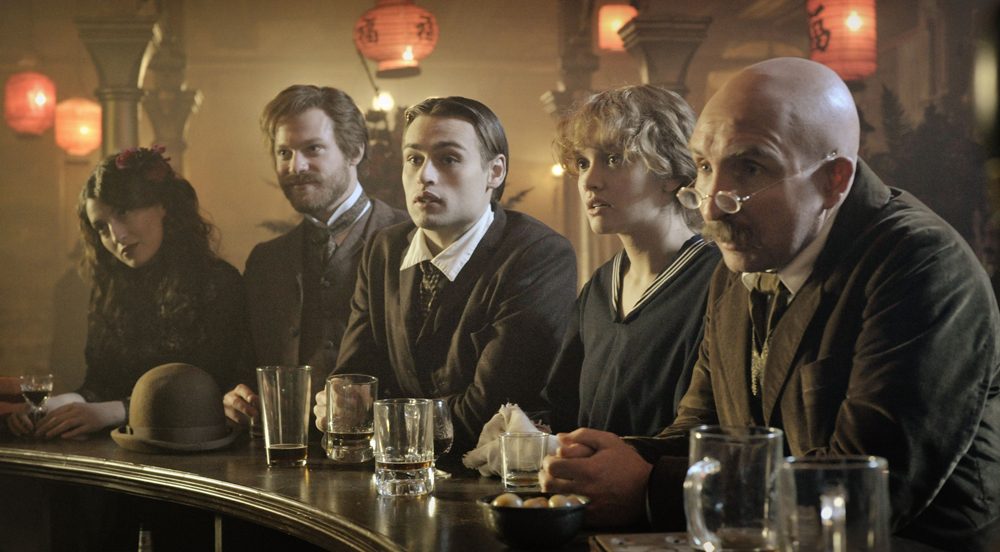 The sum of all of this surprisingly entertaining. There’s lots of laughs, no shortage of shocks and no lull in the storytelling. Although the big ‘reveal’ at the end hardly comes as a surprise, it’s the little twists and turns before and after that keep the audience on board. In short, The Limehouse Golem is gory, gothic and riotously good fun.

The Limehouse Golem is in UK cinemas from 1st September.