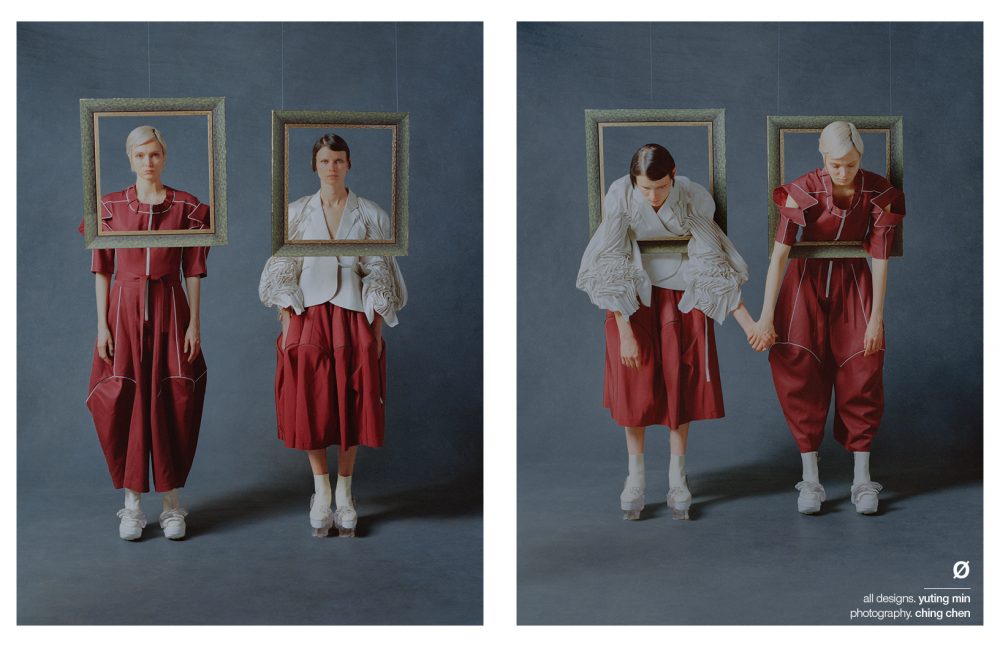 Things are not always what they seem, and Yuting Min’s thesis collection perfectly proves that. Entitled “Illusory Deception,” the collection’s pieces play with optical illusions and visual trickery to showcase a surreal yet totally diverse range.

Hailing from southern China, a significant portion of Min‘s work in this collection finds its roots somewhere in her upbringing. These influences can be seen in elements ranging from the Suzhou embroidery work performed by artist Lin Chen to the concept itself — inspired by an experience the designer had in her early school years.

Along with the collection comes a photo shoot and video, captured and directed respectively by Ching Chen. To celebrate their unveiling, Schön! spoke to Min about “Illusory Deception” and the various methods she used to accomplish these designs. 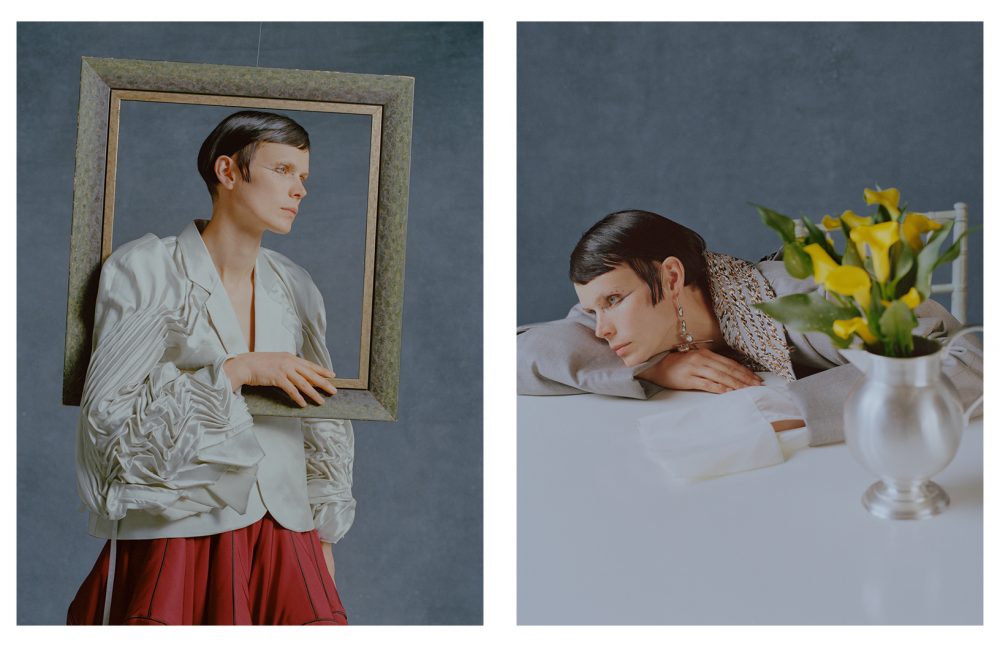 Much of the collection incorporates elements of famous optical illusions. What do you find so charming about illusion?

My thesis collection is called “Illusory Deception.” It is an attempt to provoke the deliberate misinterpretation of subsumed objective perceptions. In the process of rejecting indisputable realities, banality coalesces with irrationality and transcends into a new existence. Confucius once said, “所信者目也，而目犹不可信；所恃者心也，而心犹不足” — ‘one trusts what he sees, but his eyes are especially deceiving; one follows his own heart, but the heart is not trustworthy.’ Inquiring beyond the well-accepted daily familiarities is both challenging and daunting. There is a tendency to surrender to the most natural perceptions of apparent nature. This implies that the denial of surface-level reality requires one to betray what one’s senses repeatedly affirm. Artistic illusions challenge rationality by misleading our senses through a series of visual distortions. These distortions are unruly and difficult to accept, but nevertheless irresistibly charming.

How long have you been designing? What began your interest in fashion?

I have been studying fashion and designing for about five years. I was born in Wuxi, a town in Southern China, and later studied fashion design at the Parsons School of Design and Pratt Institute in New York. During my studies, I interned at The Row, Ralph Lauren, Vaquera and Just In Case. Growing up, I used to go window shopping in local malls with my mom. When we shopped, the salespeople would always advertise the clothes as being “expressive” or “unique,” but the clothes from their store would look awfully similar to those from other stores right next to them. To me, all the clothes looked cliché and boring. They didn’t bring out anything special. I knew that I could create something more expressive, more interesting and make designs that help communicate one’s personality and stories. That is why I got interested in fashion.

Talk a bit about the three approaches you used when designing this collection.

The three approaches for designing this collection are the Perception Approach, the Hiding Approach and the Prints Approach. In the Perception Approach, I combined the features of a suit jacket and a pair of basic pants by draping suits over pants, thereby creating an apparel possessing the traits of both pants and suits. Then, I deconstructed two pants as sleeves and combined dress and jacket on the shoulder to explore how attire integration challenges human perception. In the hiding approach, I tried to hide shapes and messages into pleats, questioning how many shapes you could recognize in an outfit. In one jacket, I tried to hide a face profile in the sleeve’s front panel. Also, in the suspender skirt, I tried to conceal a person upside down. For the prints approach, I drenched the paper printed with my drawing on a large scale and stick the paper together to form the shape and the pattern placement.

When did you learn about 3D printing resin, and how did you decide to work that into your designs?

I first learned 3D printing in Parsons 3D workshop. While there, I tried to build up models for printing 3D plastic. When I started to design my accessories, especially the boots, I wanted to cast resin for the “ghost effect” hands, which would appear as heels on the boots when viewed from a close distance. In short, watching from far away, the heels of the boots look normal, but if you look at the boots closely, the heels transform into two transparent resin hands, which appear to hold the boot up. Throughout the entire process, I asked for help from my friends in China to improve the 3D modelling for my design. Overall, I am glad that I successfully incorporated 3D printing into the heels of the boots. 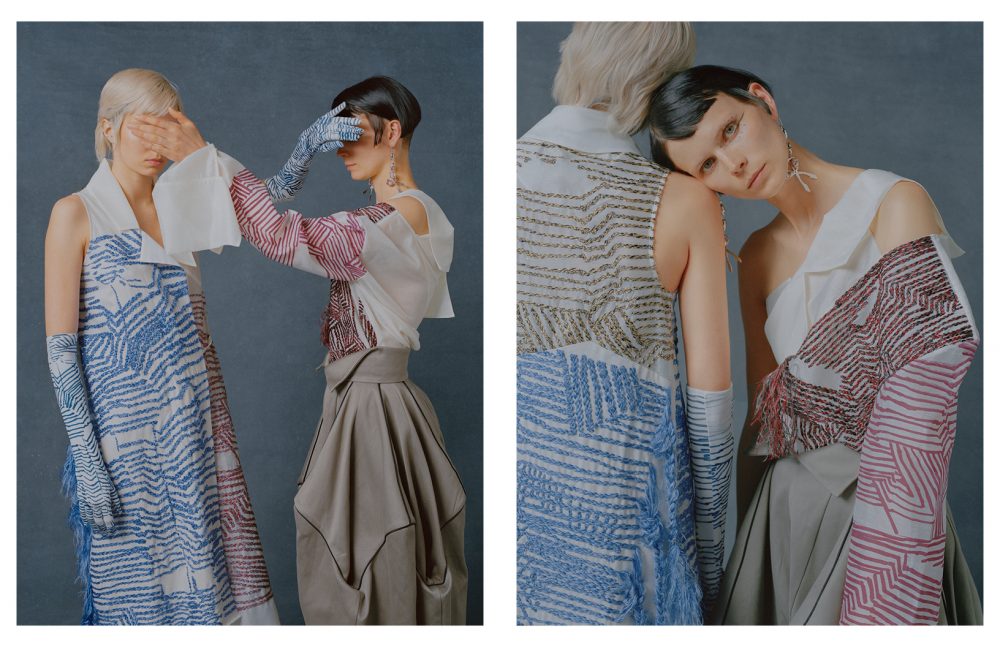 In regard to the hidden images in your work, what inspired this design choice?

This might come as a surprise, but I drew my inspiration from a primary school entrance exam that I took. There were questions about imagery illusions and mathematical possibilities. I missed many questions on the exam because I was trapped by visual illusions and did not inquire beyond the surface appearances. One famous example consists of a picture with an animal that possesses the face of a rabbit and a duck. The question asked was “what animal do you see in this picture?” The question helped me understand deliberate ambiguity and the different representations of the same visual perception. The exam also had some problems about how many surfaces exist on a Mobius ring, a ring made by twisting a piece of paper 180 degrees inwards and glueing two ends together. These concepts planted the idea of misconception in me. Later on, when I began studying fashion design, I started reviewing the works of artists such as Liubolin and Salvador Dalí, whose artworks became my inspiration.

How did you meet the embroidery artist Lin Chen, and how did you collaborate for this collection?

I met Lin Chen, a traditional Suzhou embroidery artist, because my mother is a collector of traditional Chinese embroidery. She often brought me to Suzhou, a city close to my hometown, to purchase artworks. I met Lin two years ago and was intrigued by her artworks. For fabric manipulation, I collaborated with Lin Chen to create illusion traps in fabric. Initially, I drew linear drawings to create “hidden clothes” and “hidden humans” in twisted lines. Then I designed the size and colour of the pattern and worked with Lin to embroider the pattern onto organza and suiting fabric by twisting silk threads of vibrant colours. 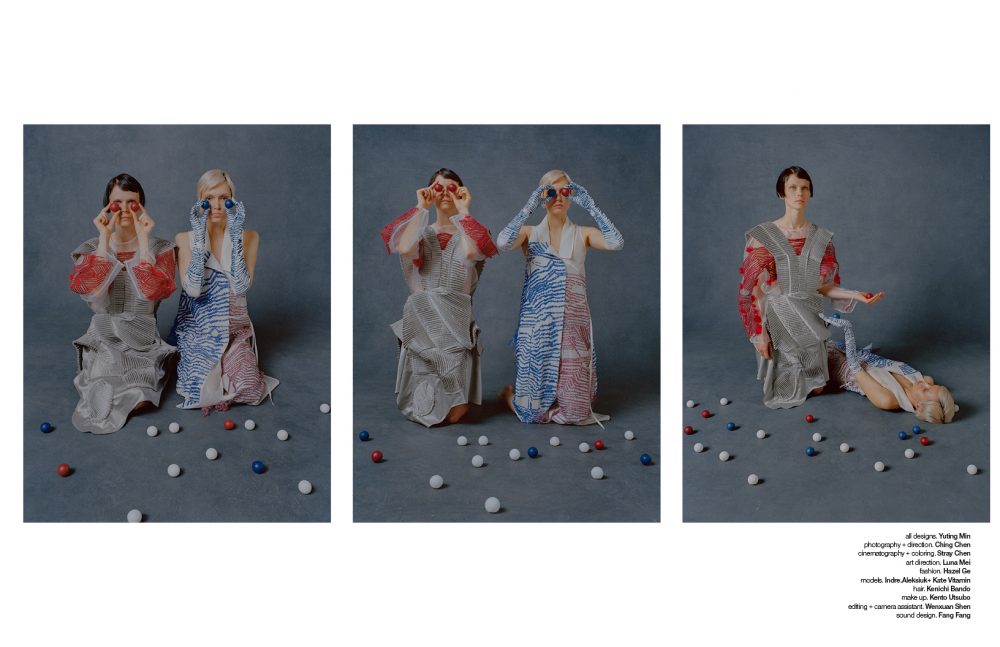 Tell us a little about this photo shoot.

Both the photo shoot and the video are called “ø,” inspired by the collection concept. Its aim is to build a magical and illusory scene, with elements of surrealism. The atmosphere and colour endeavours to generate a sense of mystery. The video is a story about an endless loop – “Infinity∞.” It begins with the white-haired girl picking up and dropping the white ball and ends with the black-haired girl picking up the black ball. The concept illustrates that we see the black and white ball continuously changing as audiences but the two women within the scenario could only see one colour of the ball in their own perception. Other than the visuals, the sound design in the video further emphasises the importance of surrealism within the collection. For example, the ball drop, in this illusion, radiates the sound of water falling off a cliff. Overall, both the photo shoot and the video seeks to promote magic and illusion.

Are there any particular messages or themes you want to convey with this collection?

Perception is not objective, so don’t treat like it is objective. Try to consider aspects of every situation, every interaction, and every viewpoint. That will bring more understanding to the world. This collection focuses on creating an integrated set of visual traps, which illustrates the effect of artistic distortion. Within the work, Illusion is explored in three ways: perception, hiding and prints. In the process, I developed the collection through embroidery, silkscreen and 3D printing resin.