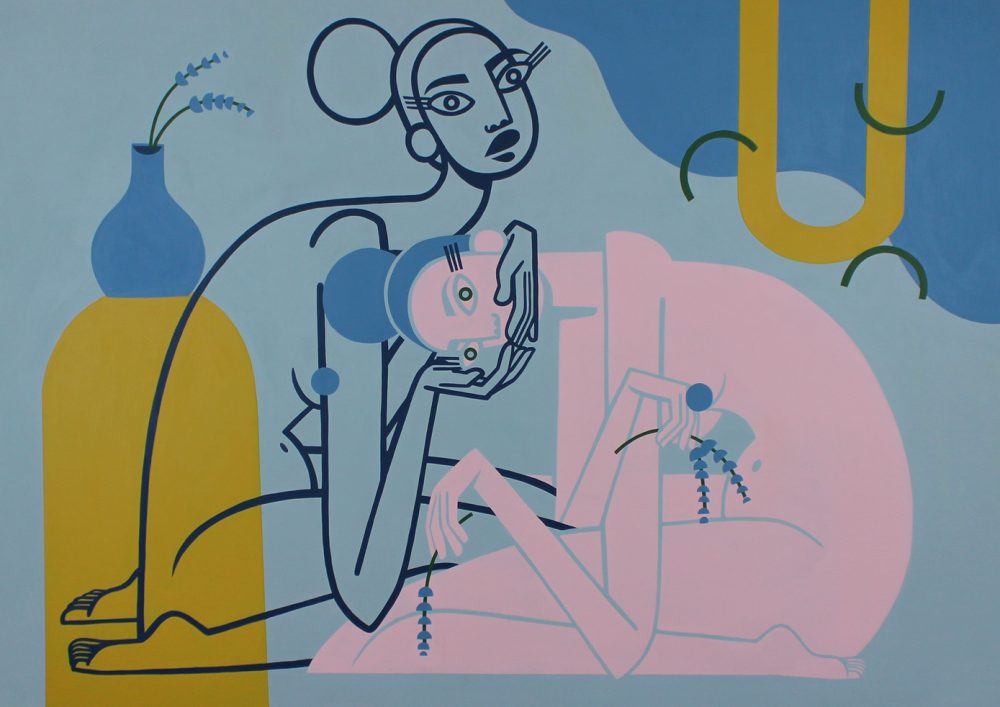 Flowers truly are a language all their own. Beyond mere decoration, giving someone flowers can show care, empathy, remembrance and more, with each flower bringing with it a different symbolic meaning and emotional energy. Drawing from this idea and currently on view at the Corey Helford Gallery in Los Angeles is Not A Flower Alone, a showcase of artists Jillian Evelyn and Kristen Liu-Wong centred around floriography — the “language of flowers.”

The work of both artists is uniquely distinct; however, presented together, their complementary nature is immediately evident. The hyper-detailed worlds of Liu-Wong’s imagination exist on the same plane as Evelyn’s relative minimalism, and when the two artists are shown concurrently, new realities are created — a colourful array with an undeniable spirit and biting sense of humour. To coincide with the exhibition’s run, Schön! caught up with the two artists to discuss the genesis Not A Flower Alone, the work process, future projects and more. 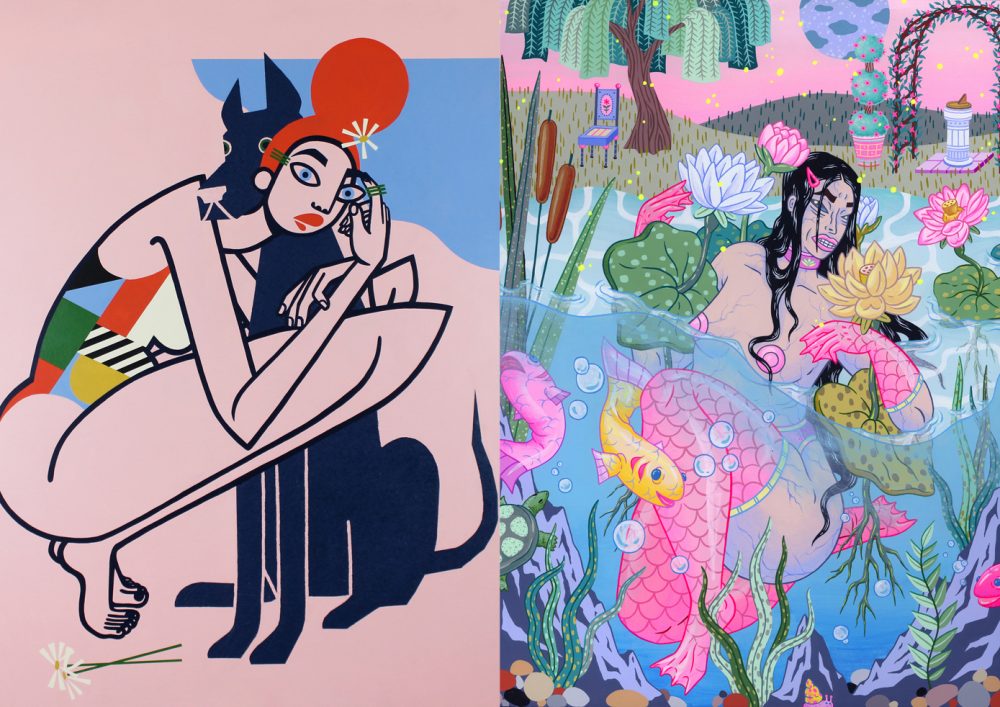 Jillian Evelyn: Kristen and I wanted to find a topic that would tie our work together but separate our work at the same time. Although we both work with the female figure, the way we work is very different so floriography was nice way to bridge our work and creative process.

What’s your history with floriography?

Kristen Liu-Wong: I’ve heard about the language of flowers off and on (through history class, art history, the British mystery series Rosemary &Thyme and my mother’s love of plants) but my interest in it was piqued most recently after seeing an exhibit of the Pre-Raphaelites at the Legion of Honor. Some of their pieces drew on floriography and they were so exquisitely beautiful and complex. I loved that an entire story could be told in the flowers painted in a piece. I’ve always been intrigued by Victorian culture. It’s very sentimental and macabre and romantic. I tried to make pieces that had that same romantic but macabre feeling.

When considering these works, was there a story or narrative going through your head that tied these pieces a) together, and b) to you personally?

K.L.W.: They’re tied together in their connection to me but there’s no single overarching narrative. When I first began working on pieces, I began each painting by picking a specific flower and building a story around it. My thistle piece, for example, became a sort of portrait of my introverted side since thistles symbolize misanthropy. As I continued to work on pieces, I became a little more organic in my approach to coming up with work. I learned that azaleas sent in a black vase were a death threat so I made a piece that explored both the darker aspects of human nature and the darker meanings that can be found in floriography. I saw lotuses blossoming at Echo Park Lake in Los Angeles so I made a piece that I hoped would capture the joy and beauty of that day. And when I felt contemplative reflecting on the show for the last piece, I decided to make a painting about memory and the pitfalls — and bittersweet moments — that can come from reflecting on memories. 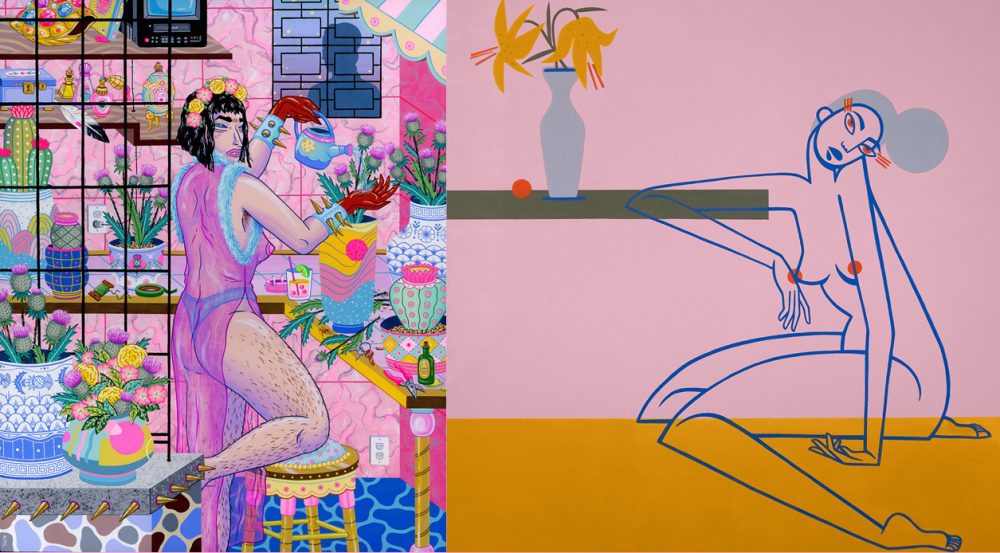 Jillian, your work is quite vibrant. Have you always been attracted to these bright colours, and how did you begin incorporating them into your work?

J.E.: I love colour and creating colour palettes. If you come to my home, you would see a lot of the colours I use in my paintings throughout. It’s just part of who I am and happens organically. Even my wardrobe tends to be colourful.

Describe your creative process for us. What’s the journey from canvas to finalised piece?

J.E.: I always start with gestural sketching that allows me to play with form and negative space. From those sketches, I will tighten things up by adding sharper angles and crisp lines. I will draw this multiple times and try to find the right amount of lines and use of space. Once I have the image finished, I will choose a colour palette and turn it into a painting. The beginning process is always the most important for me.

Do you feel you reveal more about yourself during the painting process or after the painting has been completed?

J.E.: Both. There is a level of information that you choose to share and form the main idea of the painting.  But there will always be the parts of myself that I share sub-consciously and those are the thing I don’t see until the painting or body of work is completed.

Kristen, throughout your body of work, on the other hand, there’s a palpable sense of humour. Who are some of your humour inspirations, both visually and otherwise?

K.L.W.: R. Crumb, Renee Magritte, Porous Walker and Penelope Gazin all have amazingly unique, funny and clever work. Futurama is another great source of inspiration, both for its humour and it’s incredibly visual and thematic creativity. I’m also a big fan of King of the Hill, J’amie: Private School Girl, and Daria. 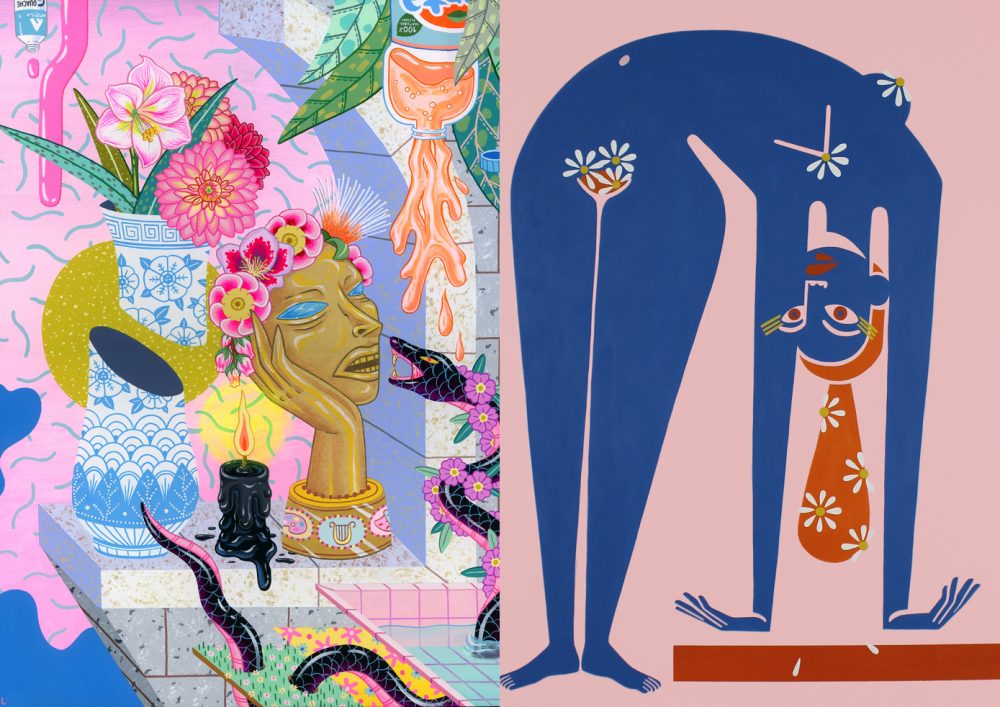 Kristen Liu-Wong “Still Life for Calliope”
opposite
Jillian Evelyn “Love Me, Love Me Not”

Tell us about your collaboration with RVCA. How did that come about and what were your goals with the project?

K.L.W.: I first met RVCA because they work a lot with my boyfriend Luke Pelletier. They reached out to me and gradually we got to talking about developing a line. I saw the amazing job that they did with Luke’s line, and I’ve admired the work they’ve done with legends like Barry McGee and Ed Templeton, so of course, it was a real privilege to be able to work with them. One of my favourite art books in college was Outerspace Hillbilly that they released with Barry McGee and Clare Rojas so I couldn’t believe it when I was approached! I’ve never helped design a full line so I guess my only goal for the project was that it would be good haha.

How did you first meet Jillian?

K.L.W.: We met at an opening! Actually, we met super quickly once at an opening because we both have pugs. I was petting her pug Olie but we didn’t really talk too much — it was more of an “I like your dog” thing. I ran into her again a little while later at another opening — I think at New Image — and we started chatting. We all went to a bar after and Jillian joined us, and we’ve been hanging out ever since!

Why do you think your work pairs so well?

K.L.W.: I feel like we both approach our work with a similar impulse but in very different ways and I think that people can sense the similarities in our impulses, even though our end products appear vastly different at first glance.

J.E.: Our work is very different ascetically, but we share similar ideologies. We even choose to communicate those ideas differently, but I think the contrast in storytelling is what makes them work so well together.

If you had to choose three words to tie your pieces in this collection together, what would they be?

J.E.: How about five words? Flowers can be sad too. 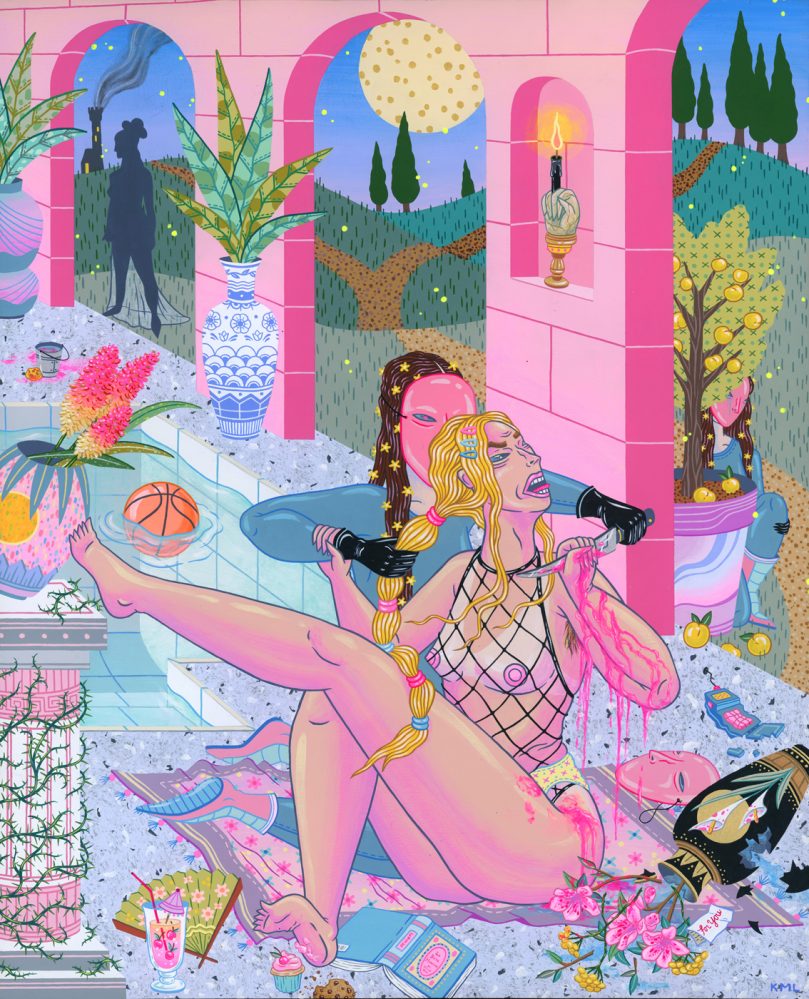 “Not A Flower Alone” is on show at the Corey Helford Gallery in Los Angeles until October 26.

words. Braden Bjella
all images are courtesy of the artists and ChummyPress