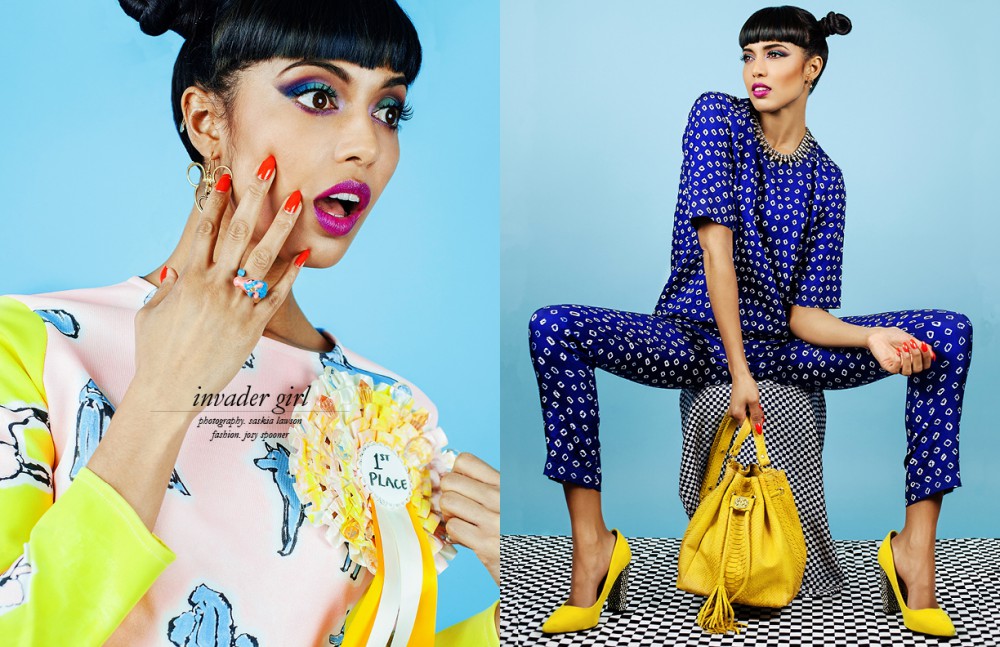 Never one to take herself too seriously, the extraordinary creation that is Cinnamon Girl, turned Invader Girl, can only be spotted sporting explosive outfits, chasing unicorns and working on sky-high dreams. The Danish singer, one to watch closely in 2015, is creating a new genre of music through her psychedelic beats and alluring vocals. Schön! unearths more about this fantastical feminist; the evolution of her sound, the inspiration behind her style and how she plans to beat the music industry.

What would you call your genre of music?

I suppose it’s pop and its electronic, but there are always live drums and guitars etc. in there too so it’s hard for me to pin down genre wise.

What musical influences have shaped your style? 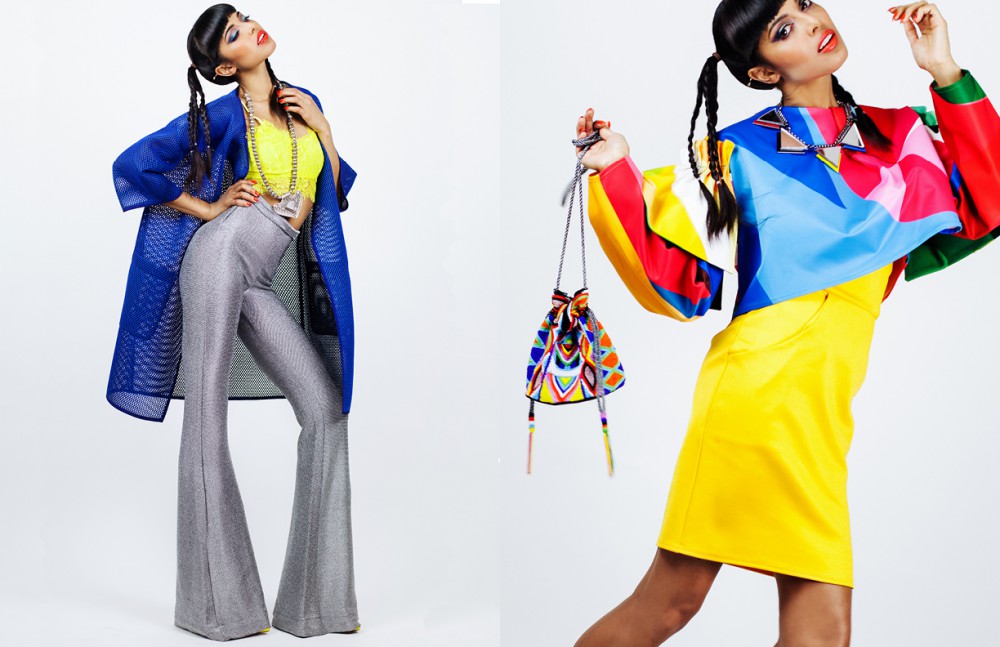 You’ve said that live instruments are an important aspect to your sound, what instruments do you play?

I’m mainly a guitarist, but I always play a little of everything -bass, keys etc. I’ve played pretty much every instrument on every Invader Girl track recorded so far. Even the drums on a couple, but I’m a really shitty drummer to be honest!

How do you first approach creating a track, the music or the lyrics?

I always start with melody. Lyrics come later for me. I usually write on the guitar and sit around wailing for hours until the words come. I feel sorry for my neighbours!

Do you think it is important for an artist to be involved in the production of a track as well as the recording?

It certainly is for me. Producing my own music means I get to create an entire world around my song. I get to present it in the exact way it was intended. I start getting production ideas the minute I begin to write something, it’s a big part of the process for me. I have a lot of fun sharing that experience with other producers sometimes too though. 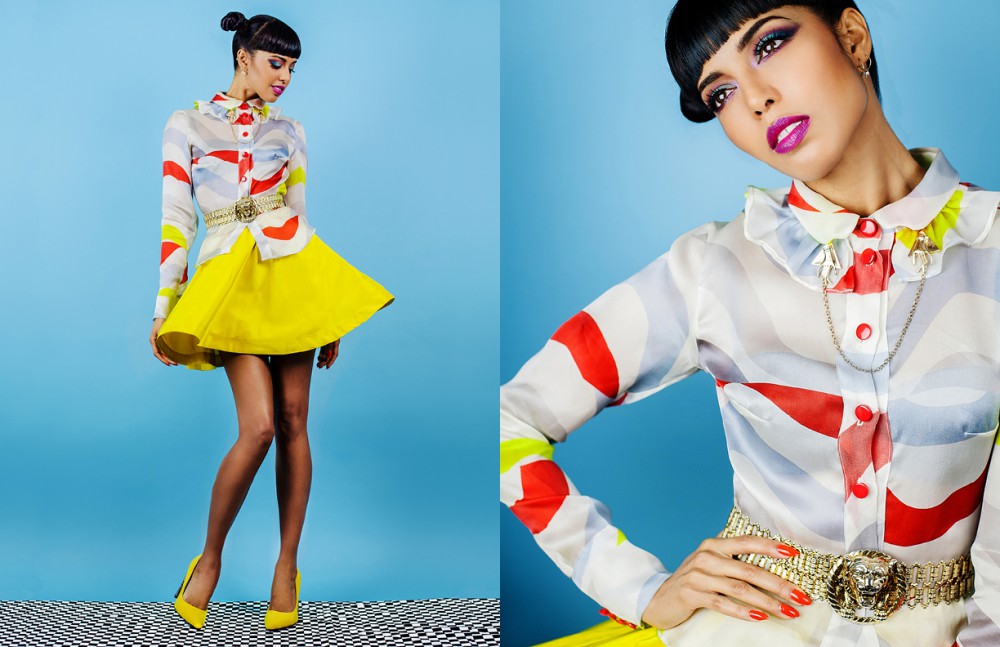 How would you describe the evolution of Cinnamon Girl to Invader Girl?

For me it was nothing but a name change. It had to happen because a US clothing company would have sued me if I ever put it on merchandise. What a bunch of tossers. Luckily, I much prefer Invader, so it was kind of a happy accident. I think the music would have always evolved and developed over time, regardless of the name. I might change my name again one day if it feels right. Who knows! I’m not so attached to names, the music is more important.

Your personal style is very fantastical, where does the desire to create this look come from?

Creating and designing clothes comes from the same creative place as everything else I make. It’s all part of doing something with the crap that spills out of my weird brain every day. I love fashion because it’s allowed to be so mental and expressive. I’m probably also influenced by all the nerdy fantasy and magic realism books I read. I think I can be slightly socially awkward sometimes and the weirder I look, the less shy I feel for some reason. If I dress confidently I can trick myself into feeling confident.

Do you think your upbringing in Denmark is reflected in your style or music?

Perhaps the music, but probably not my style. I admit I do have a few Scandi guilty pleasures on my iTunes; I’m also really excited about how the Danish music scene is evolving right now. In terms of fashion though, the Danes are very well dressed in a more classic way. I’ve been in Copenhagen for the last couple of weeks and people stare at me in the street like I’m an alien or something. I think they think my clothes are a bit weird.

I’ve heard you’re on a quest to never take a ‘selfie’, what is it you have against the trend?

I just don’t understand my generations’ total open obsession with themselves. I think it’s odd and really unhealthy. I don’t understand how it has become an acceptable part of our culture, it really weirds me out. I don’t mind a selfie if it’s to show that something utterly incredible is happening next to you, but just pouting into your phone in your bedroom for no apparent reason is really strange to me. I don’t find myself interesting enough to do that so don’t expect other people to do so either.

Having previously described yourself as a feminist, how do you incorporate female empowerment into your work?

Being a feminist is a natural part of how I respond to and decode everything that happens in my every day life. So in that sense it naturally creeps into my work, because it’s a big part of my identity and I write what I know. I do also make quite conscious choices particularly with the visual aesthetic of anything Invader Girl related. I never want to appear overly sexualised or victimised in any way, because it simply makes me feel really uncomfortable. 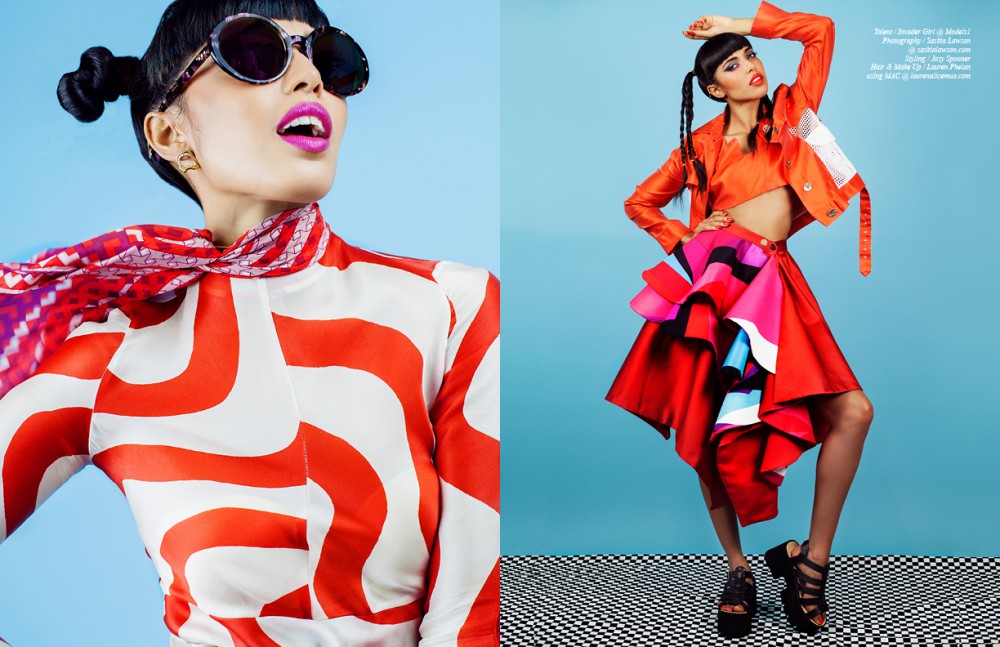 Have you experienced any cases of misogyny in the music industry?

Every single fucking day. It’s rife with it. It’s a constant battle to be heard and be taken seriously in every aspect of what I do. There are a lot of people with big egos and limited expectations of what the extent of my involvement in making my own music “should” be as a young woman for instance. It simply doesn’t compute with them or fit within the work model they are used to. But I think I’ve slowly learnt how to deal with it in a constructive way. Every now and again I meet amazing, sweet, fantastic people who are the exact opposite of that too, and they make dealing with the rest feel worthwhile.

How do you think you can change attitudes towards women in the music industry as a successful female artist?

Is there a new direction you would like to explore with your future music?

Yeah, I’m toying with the idea of starting a side project at the moment. It’s gonna be a little different to the IG stuff.

Finally, have you always been obsessed with unicorns?

Absolutely! I still want one. I’d quite like to borrow one of Khaleesi’s dragons from time to time too if she’d let me.