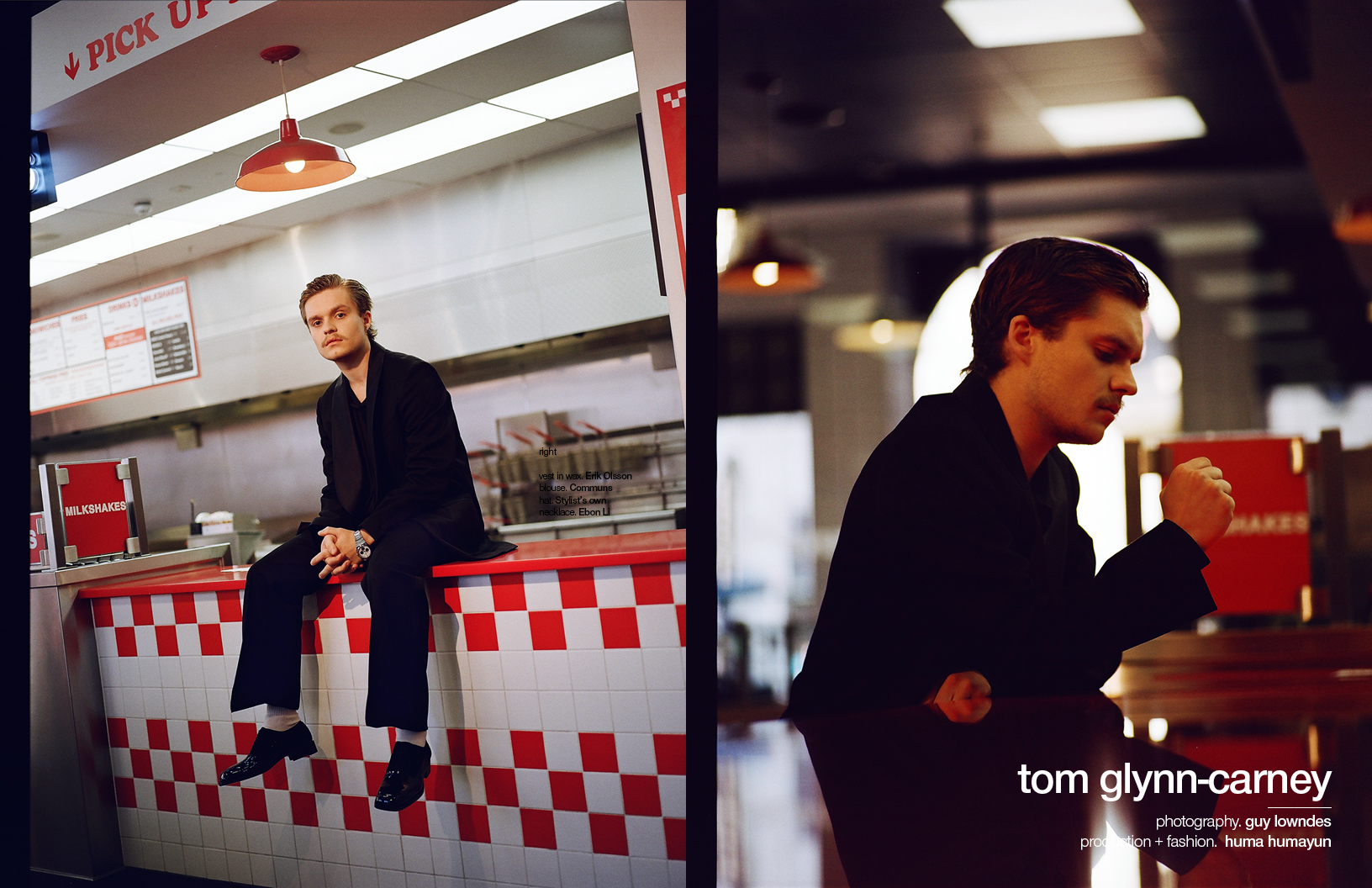 You might recognise British actor Tom Glynn-Carney from his roles in Dunkirk and Tolkien, or his short, but stunning performance as Hotspur opposite Timothée Chalamet in The King. Glynn-Carney spent the summer treading the boards of London’s West End with Amy Adams in The Glass Menagerie and will soon appear in SAS: Rogue Heroes, a six-part BBC drama from the makers of Peaky Blinders, but the project most likely to catapult the 27-year-old to fame is House of the Dragon, HBO’s prequel of Game of Thrones. Schön! joins Glynn-Carney for a milkshake and fries to get the low down on his character Aegon II Targaryen and what it was like joining arguably the biggest TV franchise of all time. 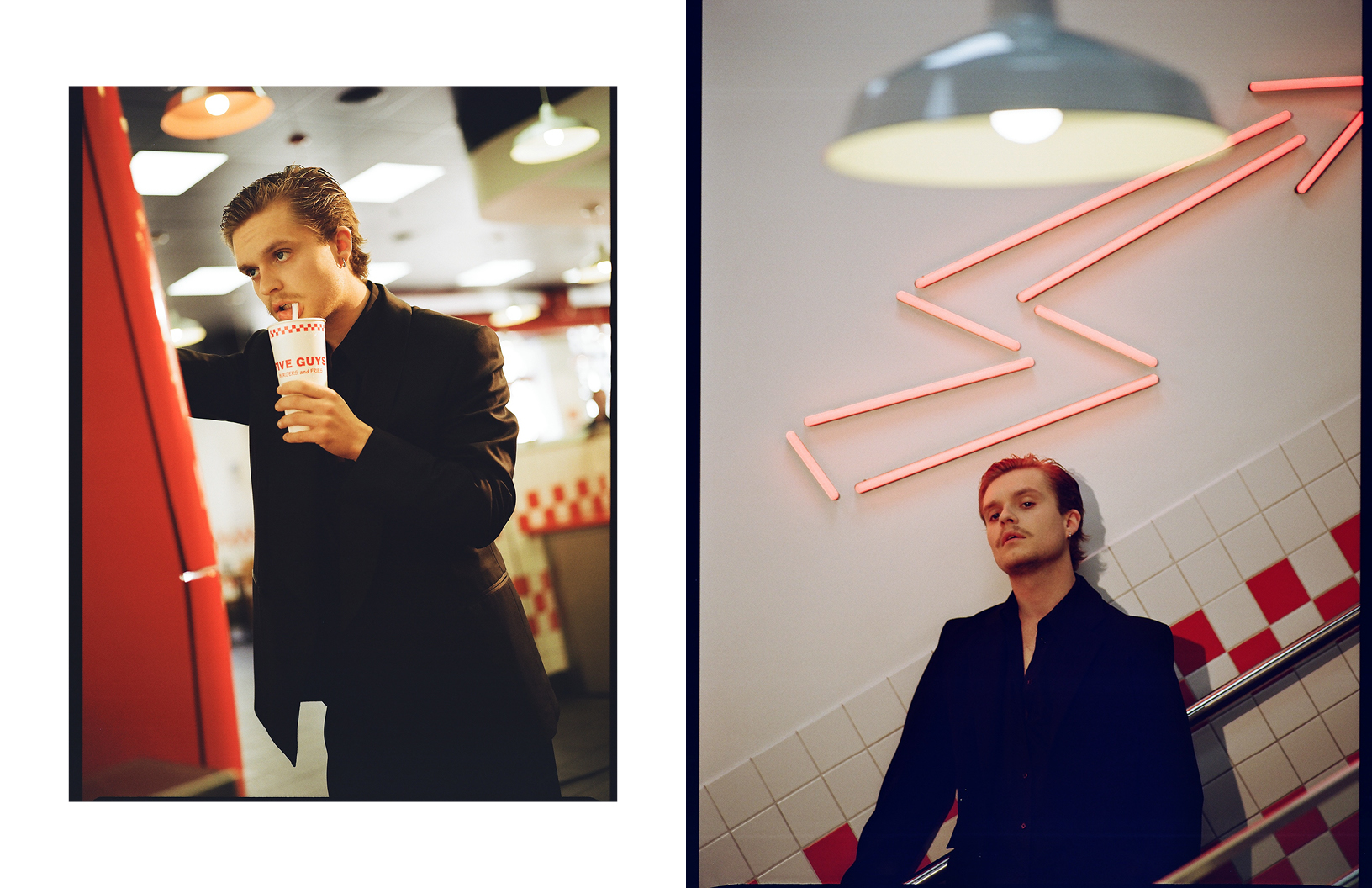 Were you a Game of Thrones fan before you become involved in House of the Dragon?

I had never seen Game of Thrones before being offered the role in House of the Dragon. I was aware of how huge of a hit the show was and was keen to see what all the fuss was about. I ended up blitzing the full eight seasons in two and a half weeks; scoffed it in one.

How did you come to be cast as Aegon II Targaryen?

I was asked to put myself on tape. I was not told what the tape was for – it was all very secretive – but I had a stab in the dark and hoped for the best. The language had a very satisfying classical feel to it and that was all I had to go off to build the world around. I want to say a huge thank you to Kate Rhodes James for masterfully putting the pieces together and making all of this happen.

George R.R. Martin has been much more involved with this project than the last few seasons of Game of Thrones, so can we expect the story to stick more closely to the source material?

George has been a great authority throughout the process, along with Ryan Condal, Miguel Sapochnik, Sarah Hess and the full team of writers and creators steering the ship in the right direction. Our story honours the source material whilst breathing new life into these highly complex characters.

Martin has compared the adaptation to a Shakespearean tragedy. Do you think that is an apt description?

I think [that] is a great way to describe it. The relationships are complex, betrayal is rife, and the stakes are life and death. 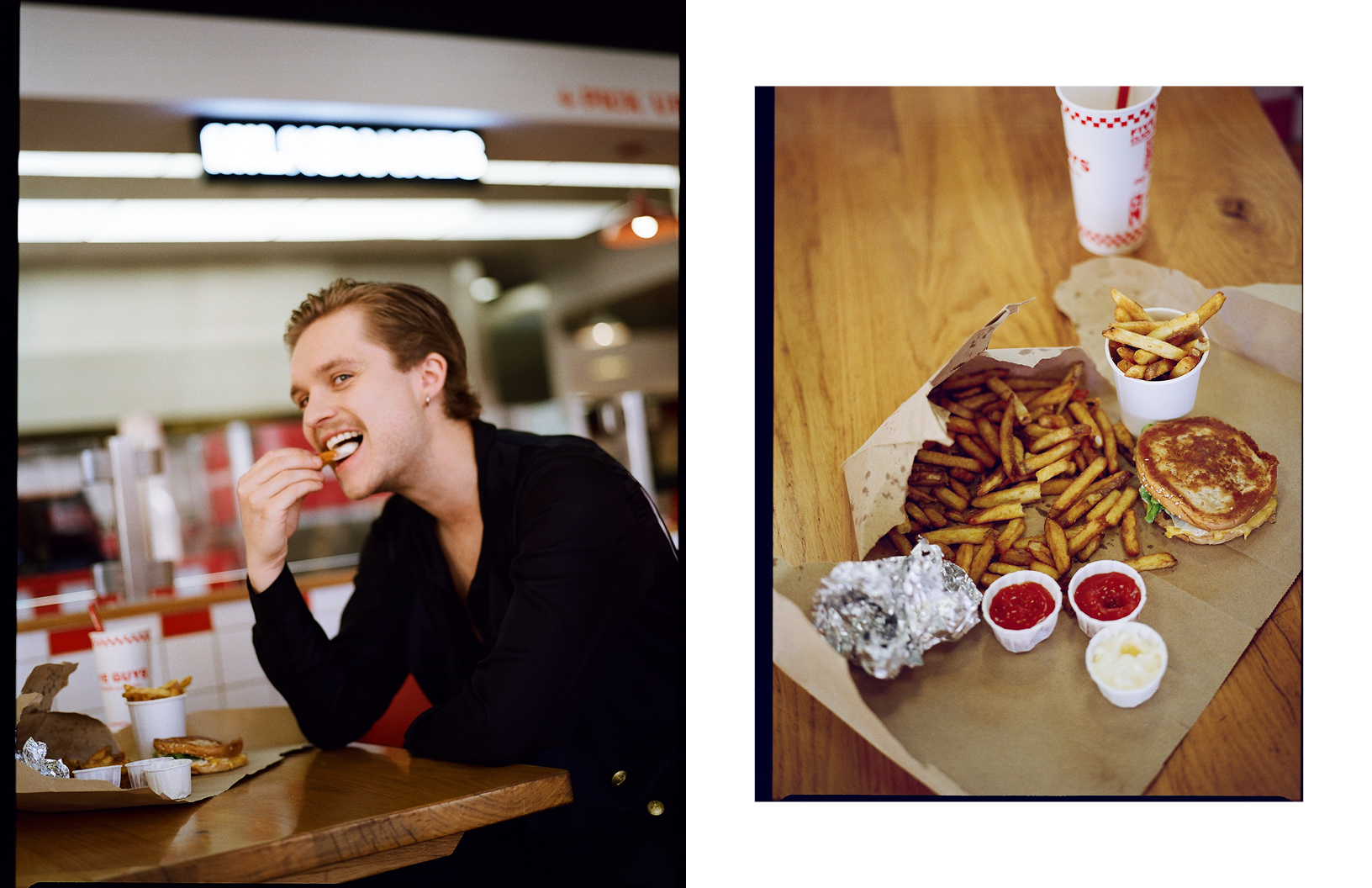 Unlike Game of Thrones, House of the Dragon focuses on one family, House Targaryen. Do you think there is still enough drama to fill ten episodes and subsequent seasons?

If anything, there is too much to cram into ten episodes and subsequent seasons. This show has infinite potential. This is just the beginning.

And where does your character Aegon fit into all of it? Aegon has been described as cruel, promiscuous, arrogant, murderous, petulant and sullen. In many ways, he sounds a lot like Joffrey Baratheon. Do you think viewers will empathise with him, or simply love to hate him?

Aegon is the eldest son of King Viserys and causes significant dispute within the realm. Aegon is a tortured soul, with many unlikable qualities – qualities I have learned to love about him. He is dealt a difficult hand and is ill equipped to deal with the pressures put to him. Some may see echoes of Joffrey Baratheon in him; I see him as a much more complex beast than this. He is desperate to be loved but destined to be hated. He seeks validation but is met by selfishness and neglect. There is a deep darkness to Aegon, one that can’t be quenched, making him incredibly dangerous and unpredictable. He is intelligent and has a keen eye for the weak spots of others. The man is a tight ball of knots and tangles, and we get a small glimpse of his potential in Season 1. He certainly is an interesting character to bring to life – a challenge I am honoured to take.

We know you can’t give away spoilers, but do we get to see much of Aegon’s arc in Season 1, or will we have to wait?

Season 2 will be fun. 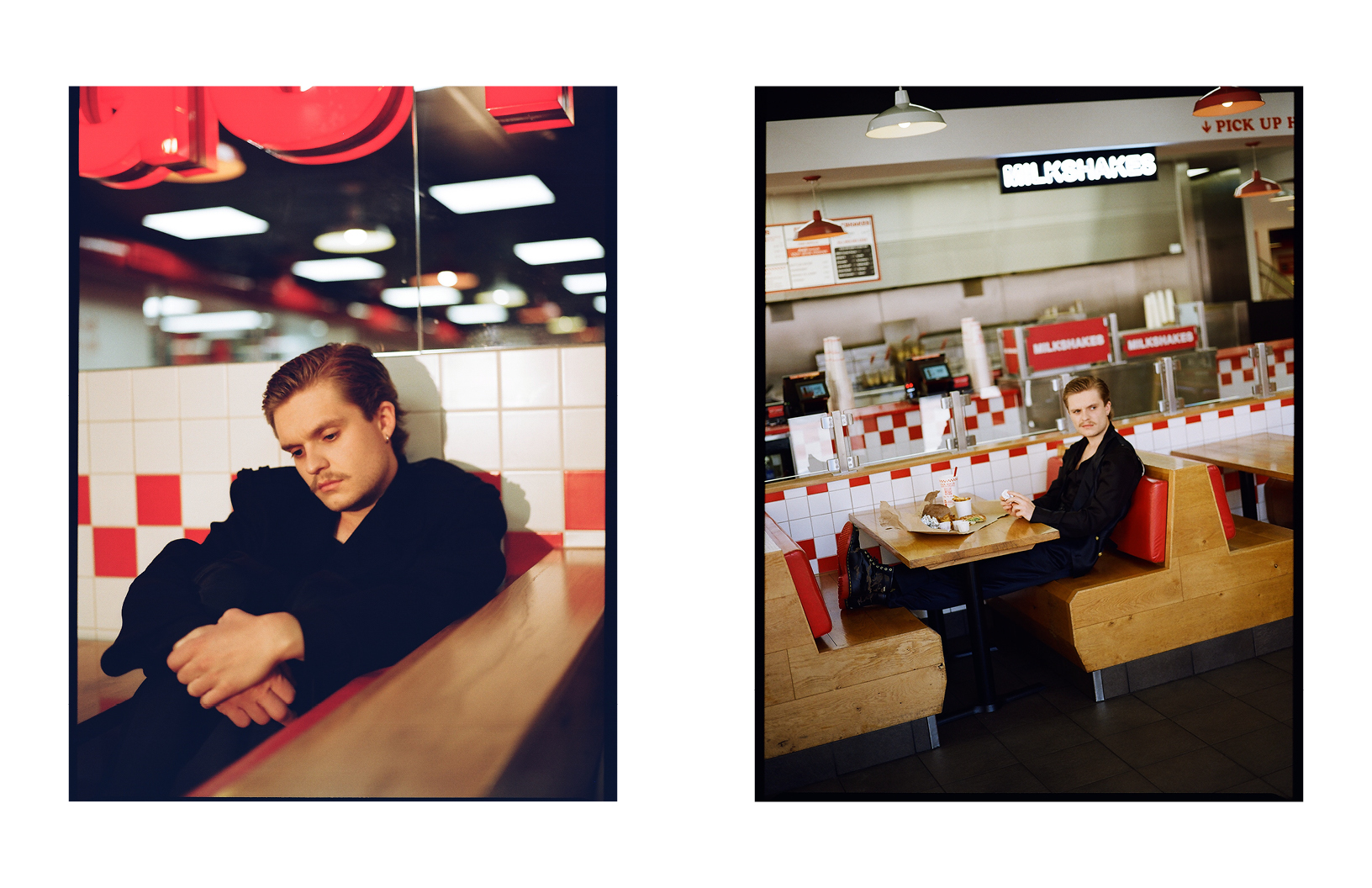 Martin’s world is inspired by historical, and particularly medieval, events. Do you think its appeal is mostly as a period fantasy, or do you think there are themes that are relevant to current events?

Any good story is timeless. This is no exception. The themes explored in our show are relevant in many ways. When reduced or refined to make sense in our relative world, sibling rivalry, complex family dynamics, social climbing, betrayal for the purpose of self-gain, resorting to violence when words are no longer enough… We’ve all experienced one or all of these things at some point in our lives. The only difference is we keep our heads and aren’t hunted by dragons.

Game of Thrones was one of the biggest – if not the biggest – TV shows of all time and then you’ve got the many fans of the books. Were you daunted by the all the expectation and speculation surrounding the first spin-off?

Of course I was daunted. It was a tremendous undertaking to attempt to revive the world of Game of Thrones, and yet, I felt safe in the hands of the incredible experts we got to work with every day. Each department was at the top of its game. We actors were the lucky ones, to be reaping the benefits of all the hard graft done by the Heads of Department and their amazing crews. The credit goes to them.

The Game of Thrones cast included some established names but also catapulted many younger actors to international stardom. Are you ready for that, should the same happen to you?

I’m not interested in stardom or fame. As long as people enjoy the show, form relationships with the characters and manage to escape for an hour on a Sunday/Monday night, I’m happy and that’s my job done.

You’ve been in films of an epic scale such as Dunkirk. How did the sets and locations of House of the Dragon stand up in comparison?

The sets and design as a whole on this show were like nothing I’d ever seen before. The Red Keep, for example, was a fully built set, with corridors, chambers, great hall, massive staircases. A full 360-degree view was achievable in this masterpiece. That compared with the huge studios covered in green screen, packed with 500+ supporting artists all cheering and screaming. The size of the piece was apparent from day one.

In contrast, you recently spent three months appearing in the West End in The Glass Menagerie. How did it feel to return to the stage after working on such a big TV production?

I loved being back on stage. Theatre is very important to me. I feel that it keeps my tools sharp and my mind quick. It’s like the gym for me as an actor. Without it, I would feel sluggish, stale and predictable in my choices. I try and make sure to return to theatre whenever I get a chance. Theatre reminds me to push the boundaries, be expansive and bold, take risks, be dangerous, be free to fail and follow my instincts. The fragility I feel when on stage is like nothing else. You can’t replicate that feeling [of being] completely exposed, uninterrupted, sharing an experience with a thousand strangers. It’s the closest thing to magic there is – apart from Harry Potter… that’s full of it. 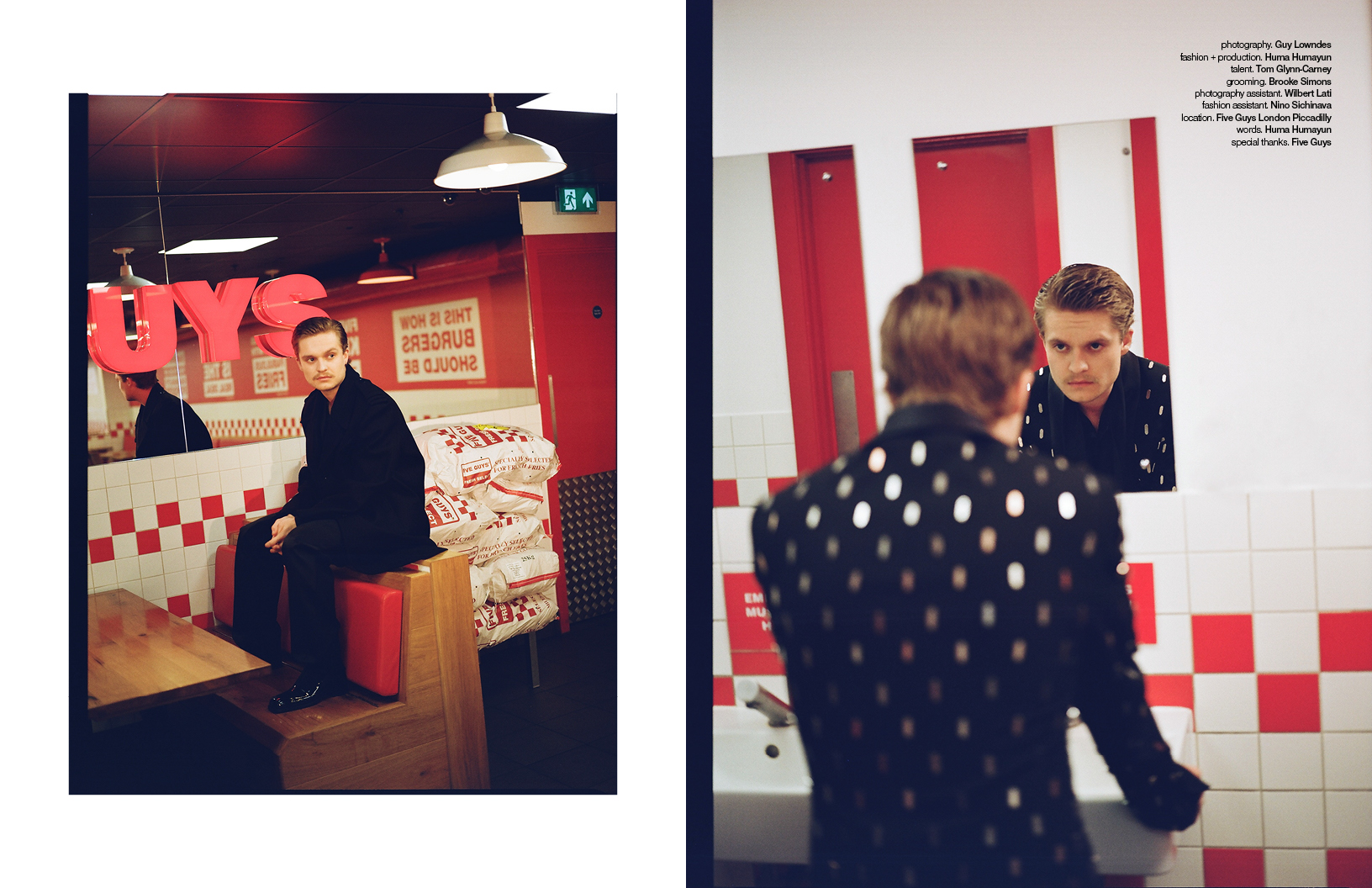 House of the Dragon is on HBO Max and Sky Atlantic now. SAS: Rogue Heroes will air on the BBC in late October.