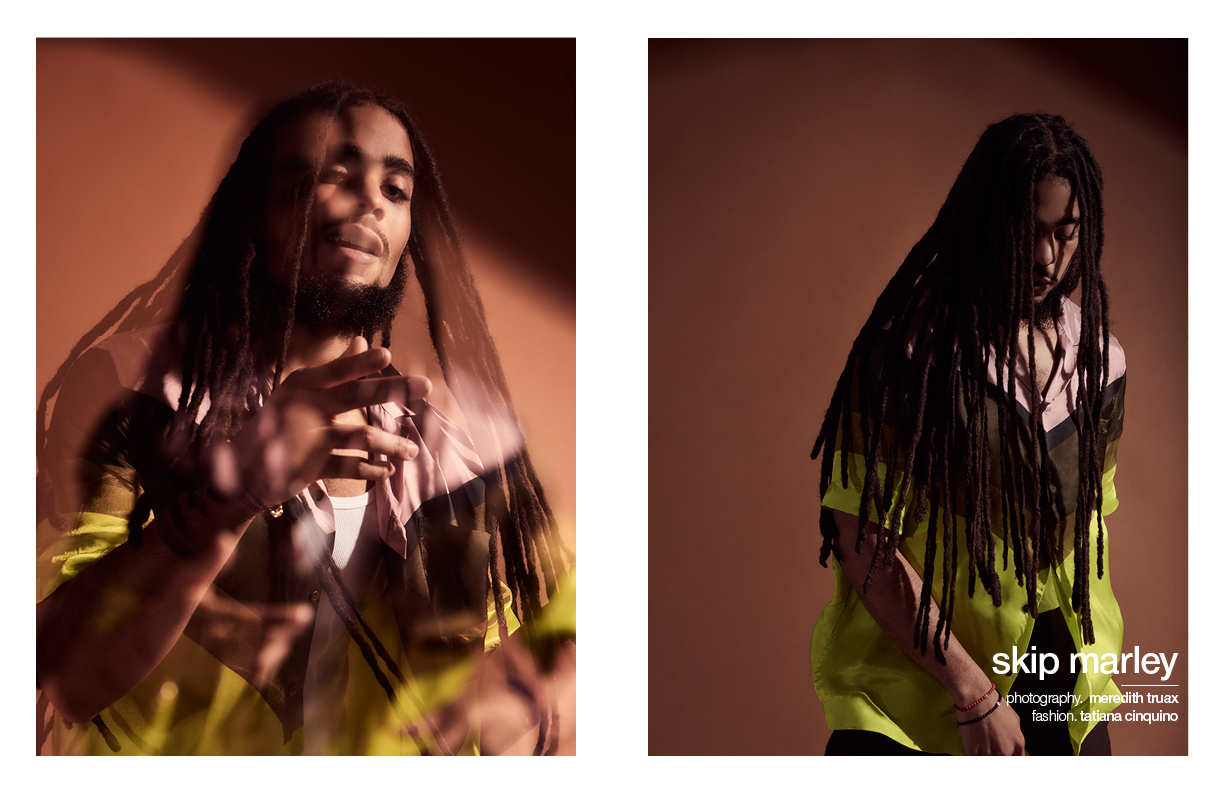 Every platform comes with the potential for great influence. Thankfully, Skip Marley is an artist with something to say. “Words cast spell,” Marley tells Schön! He sees the bigger picture when it comes to culture, visibility and impact so every lyric has the intention of inspiring change.

Born in Kingston and raised Miami, the 26-year-old artist has a worldly view on life and a diverse mix of influences. Marley’s popular hit Slow Down featuring H.E.R was only a taste of what he has to offer. Lately, Marley says that Afrobeats is on heavy rotation. His love for the genre shines on his new track Jane featuring Nigerian singer Ayra Starr. It’s a bouncy summer single that radiates healing energy with lyrics like “good for my wellness, you make me stress less.” Starr and Marley’s harmonious blend of Reggae and Afrobeats sonically celebrates the connection between the islands and the African continent. “Africa is me,” shares Marley. “We’re influenced by the African sound and Africans are influenced by the Jamaican sound. It’s a beautiful thing,” he adds.

A self-proclaimed “love warrior,” the Marley legacy lives on in Skip’s message of purpose, positivity and a conscious mind. His deeply spiritual lens permeates every aspect of his work. In a time where playlists are inundated with made-for-Tik Tok tracks, it’s refreshing to hear an artist talk about their music as an extension of themselves and a weapon for meaningful change. The promising star chats to Schön! on working with Ayra Starr on his new single and teases what fans can expect from his debut album expected to release next year.

You’ve been on tour throughout the US. How does it feel it to perform in front of crowds again after limited live shows for the past two years?

It’s great. I’ve missed the experience so much. I’ve missed performing for the beautiful people around the world. It’s an honour and a privilege to be able to be back.

You grew up around artists. Do you remember your first memories of being introduced to music?

My grandfather, my uncles, my grandmother, my mother – basically my family got me into music. Music was always playing from before I was born. After I was born music was always playing in the house. My mother and my uncles were always performing. I couldn’t tell you the first experience but from [when] I was a baby, before I could talk, I knew the sound of my grandfather’s music.

What is on your personal playlist these days?

Afrobeats as of recently. I work out and chill out to Afrobeats. I learned the African ways of Burna Boy, Stonebwoy, Ayra Starr.

What was it like working with Ayra Starr on your new song Jane?

She’s a young star so it was very easy going. She thought the song was done when I sent it to her but I said it needed her touch. She did one run-through of her verse and that was it. I knew it was her to be on the song.

What does the song mean to you?

Jane is elemental to my essential. It heals you, nurtures you, guides you, teaches you. Jane is the healing that we all need.

Your sounds really compliment each other. In future, do you think that you might dabble more into the sounds of Africa?

Africa is within me so yes. We have to connect. I love to see Africa getting the spotlight it deserves especially in the music scene. But now we have to fix the environment and state of [affairs in] Africa but one step at a time.

Whenever I’m in Africa I hear so much Dancehall. What do you think makes Jamaican music so impactful globally?

I think it’s the spirit and essence of Jamaica. We’re very spiritual and loving people. I think that energy overflows into the movement and the music. If you listen to Afrobeat it’s heavily influenced by Dancehall. It’s like a circle. We’re influenced by the African sound and Africans are influenced by the Jamaican sound. It’s a beautiful thing.

You have a debut album in the works. Can you share some insight into what kind of vibe you’re going for?

This album is to free your mind [and] consciousness because we have a lot going on that we have to speak about. It’s really for the people to free themselves. Humanity has to get on the right track. We have to change some things. Like my other song called Change, we have to make the change in the world that we [want to] see. Each person counts. It’s not about how many likes you get or how popular you are. You have a duty. You have a purpose. We have to remember these things.

What do you hope your fans learn about you from your new body of music?

I’m a love warrior. I don’t know if that’s something new but I’m a fighter. I have something to say. I want mankind to rise to the occasion it’s destined for.

What do you think the music you’re making now says about this era of your life?

I look forward to looking back on this music. I hope the music just keeps getting better. I keep learning, growing, expressing and creating something new [and] fresh so we can keep people’s minds free, hearts full and conscience clear and clean.

Music is the perfect way to do that.

Music is a tool. We have to be careful how we use it because words cast spell. You can have positive and you can have negative. I just try to think, live and influence positivity and consciousness.