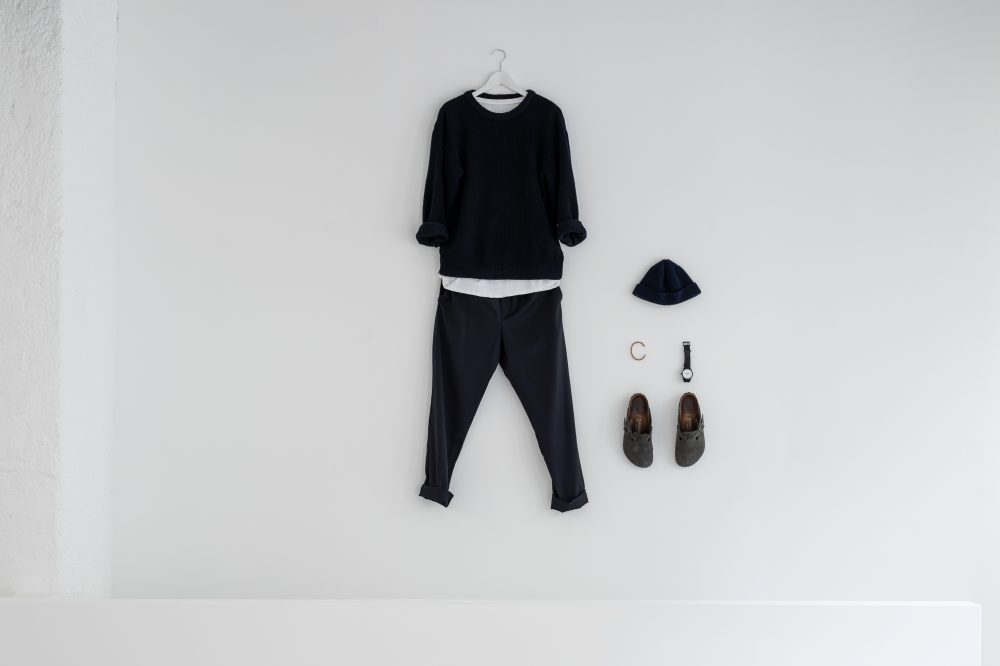 With his project “Selbstportrait,” German conceptual artist Simon Freund questions the way we associate our identities with the way we look like through a series of 200 photographs. The first half shows 100 different people all wearing Simon’s black “signature uniform,” while the second frames Simon in the clothes of those same 100 persons. Through the contrasting imagery, the artist attempts to answer the questions of what we actually need to be ourselves, and whether the power of clothes is enough to create a genuine self-portrait.

Born in 1990 in Königstein im Taunus, Freund currently lives in Gotha, Germany. He has produced many conceptual projects questioning today’s society and human relationships. Here, Schön! talks with the artist about his journey, the origins of “Selbstportrait,” and the way it reflects the artist’s own understanding of identity and vulnerability. Make sure to hover and click over the full gallery of portraits below to witness both sides of “Selbstportrait.”

What drew you to art and photography?

As a young boy, I was really fascinated by skateboarding and snowboarding. However, I was not only fascinated by the sport but also by the whole lifestyle around it, which was heavily influenced by the brands. I became very aware of the brands I was buying and wearing and was very hooked on their logos and everything around those brands. This sort of made me want to create my own brand and with my 18th birthday I made this dream a reality and started my own snowboarding-inspired clothing brand with the ambition to fight against global warming through statement caps and shirts.

Roughly six years later, at the height of my career in the fashion business, I finally realised that creating and selling more stuff wouldn’t help my actual ambition of fighting global warming and I stopped the brand and all my commercial work altogether. However, I still felt the urge to create and express myself through creation. Thanks to the confidence I gained by running my own brand, I took a position as an artist, and that’s how I started.

Your project Selbsportrait studies the way identity is defined through clothes. Do you personally understand yourself according to the way you look like?

Well, I wish I wouldn’t as I’m trying to argue that you can’t really portray someone with solely a photograph and that identity is much more than clothes – but yes, I do think that a pretty big part of my identity is represented in the way I dress and the way I look like. Partly because I want to express certain things by the way I dress but partly it’s also simply a logical result of my beliefs.

What were the biggest challenges with such an audacious series?

In the beginning the biggest challenge was to find enough humans to participate. Towards the end however word spread and I could have easily photographed more than the 100 people who are in the series right now. I’m still very tempted to add some more as there are so many more outfits and personalities I’d like to include. Another really big challenge is my size. With 172 cm and a little more than 50 kilos, I’m not especially tall, so I was very afraid that my outfit would not fit everyone and that I would need to exclude some people, due to their body size. In the end, however, everyone who wanted to participate could wear my outfit and there was only one, who didn’t dare to try my outfit after I expressed my worries, that it might not fit – which I regret a lot.

How did the idea of “Selbsportrait” come up?

During my time as a fashion designer, I was lucky to photograph a model wearing the clothes I designed. In one of the shots, the expression of the model was so distinct that I felt super connected to the photo. For me, the photo completely expressed what I felt at that time. This made me question myself if it might be possible to make a self-portrait of someone who is not even present on the photo, only by using clothes and expression. At first, I simply wanted to capture 100 different people wearing my clothes and I didn’t even think of photographing myself in theirs. During the first photo, it felt like I needed to wear their clothes as well though, which in a way made it easier for everyone involved as of course you need to undress first and it put me and the other human in the same position.

Who were the main influences on your work?

As I mentioned before my beginnings were in fashion and design. So my first big influence actually was Dieter Rams, a German product designer, who I was really happy to meet many years later while working for Vitsoe, the furniture company who still produces his designs today. Much later I began to discover artists such as Marcel Duchamp, Joseph Beuys or Erwin Wurm and even later artists such as Alicja Kwade and one of my favourites, Sophie Calle, or again much later the internet artist Rafaël Rozendaal. I’m not really sure how much all of them influenced me or my work though. I’m really impressed by what they did or what they are doing for different reasons – but it’s mainly their personalities or how they think about art, more than their actual work. One thing is for sure: all of them motivated me to start working as an artist and motivate me to keep going.

What do you want people to understand while looking at Selbsportrait?

With all of my work I only want to do one thing: I want to make people think. What they think doesn’t matter. Maybe they like the aesthetic of the repeating images, maybe they wonder how they would look like wearing a dress or maybe they even think if it would be possible that every humans wear the same clothes everyday… of course I hope that no one will understand my art in a wrong way, but what’s right or wrong anyway these days anyways? If anyone desperately wants to know what to make of this piece, they can contact me and I’ll guide them through the piece and how I would read it.

This work is a very intimate introspection into your understanding of identity. Do you believe vulnerability to be paramount for an artist?

I don’t believe vulnerability to be paramount for an artist, but I do think it’s an important part of my work and my personality. At the same time there is sort of a barrier between the intimacy of myself as an artist and the intimacy of me as who I am as a human being. It feels like the artist version of myself would always go a step further than I would – while of course it’s not exactly easy to keep both of them separate. 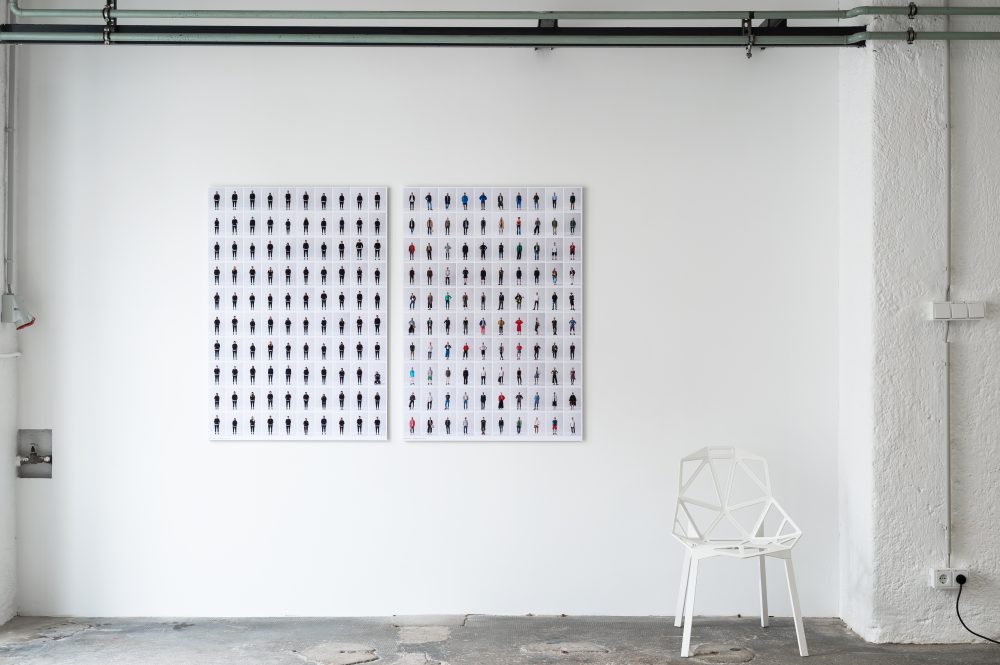 Which series do you believe to reflect yourself more – your wearing of 100 people’s clothes, or 100 different people wearing your clothes?

That’s an interesting question and it’s not often that I get asked which series reflects me the most. I guess, well… I don’t know really. Most know me by the way I dress, but what I also try to express in the series, is that that’s only a superficial and small part of who we are. If you really want to make a portrait of me, maybe I must be naked, filmed instead of photographed and I’m answering your questions – this would come close and still would only portrait a part of who I am.

Is there any other notion or idea you would like to work on in future projects?

What I really liked in this specific project was to work with so many different persons. I mostly work with objects or code on the internet or photography but human beings – that’s a hell of a medium for an artist if you ask me. So let’s see what else I can come up with including people…

What’s also constantly on my mind is our obsession with social media and even though I did work around this theme quite a bit during the last years (with countless.info, like, 2018, and follow me), that’s something I can’t let go and it feels like there’s still something I need to say.

What are you now looking forward to, both artistically and personally?

This month I’m going to move to Ghent in Belgium for a couple of months, which I’m super excited about. Also, “Selbstportrait” will be shown as part of the Reclaim Award in Cologne Germany on a billboard in the city for 10 days towards the end of September and I can’t wait to see the project in such a huge size and to see the reaction of the public.