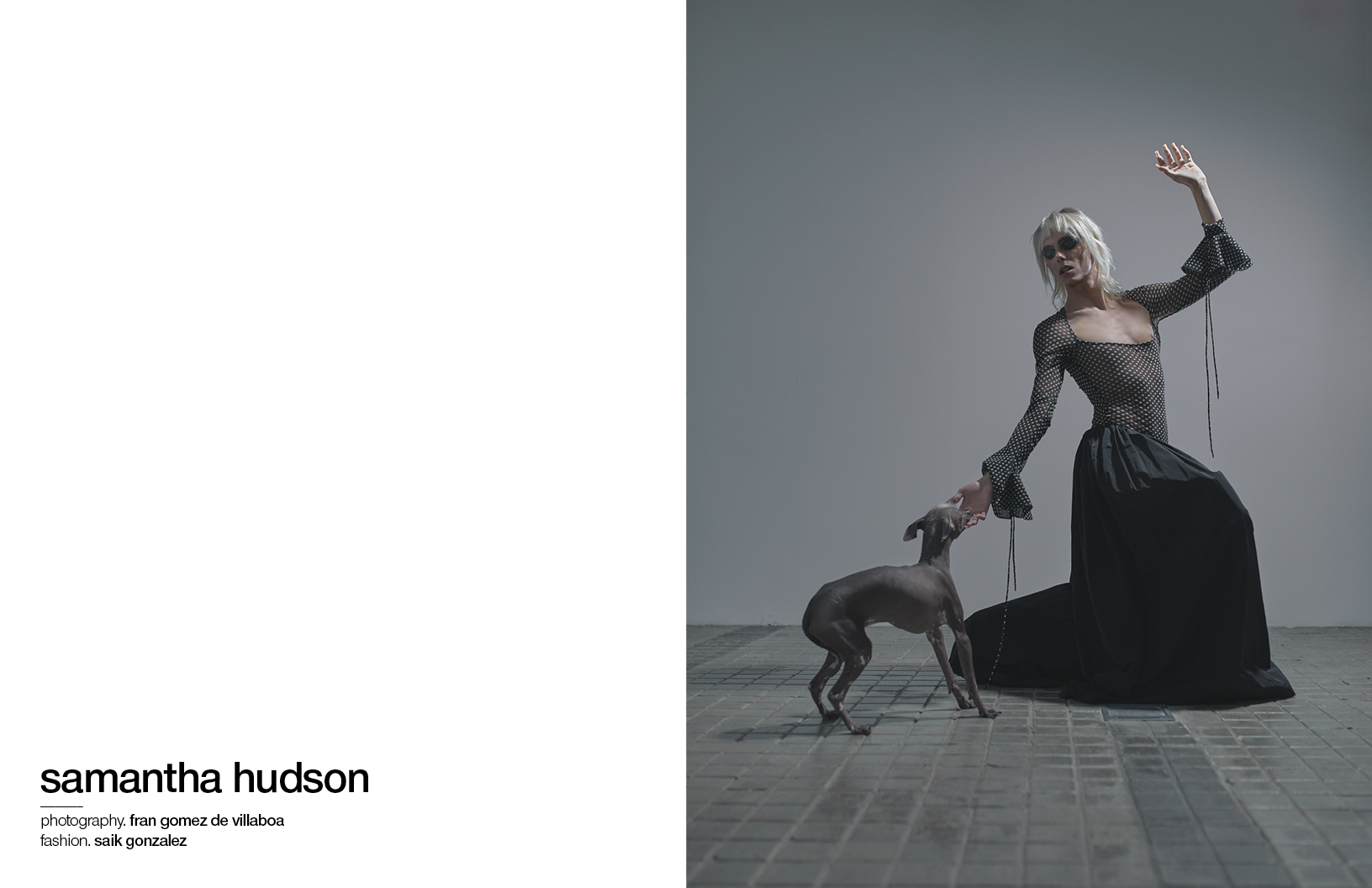 Having become famous overnight by virtue of school project called Maricon, the 19-year-old Ivan Gonzalez introduced to the world his alter ego ‘Samantha Hudson’ — a fearless, bourgeois electro-diva whose music speaks about class, sex, gender and describes problems queer community faces. Samantha’s activities exceed simply the “meme” role; with characteristic flair, the underground icon rallies against homophobia, hatred and prejudices. Samantha actively works not only on her music but also a wide variety of projects to support the LGBTQ+ community, one of which being a series of podcasts on Netflix. Samantha spoke to Schön! about her latest video, the Spanish queer community and so much more.

How do you think your childhood in León and Mallorca shaped you and your alter ego, Samantha Hudson?

I’ve always been pretty much the same. The sense of humour was there, the desire to show off and brag on my flamboyance were there. Maybe, the inheritance these two places have left me are the housewife manners from the women in my family and the tacky-kitsch-souvenir store old-fashioned glamour from Magaluf, which is the place where I was raised. I would dare to say that I’m a perfect hybrid of a kind, old family lady who takes care of her children and a drunk party-monster woman with a horrible sense of taste and some panties that she hasn’t changed in three days. The balance between a ‘home sweet home’ embroidery and a ‘what happens in Magaluf stays in Magaluf’ fridge magnet. 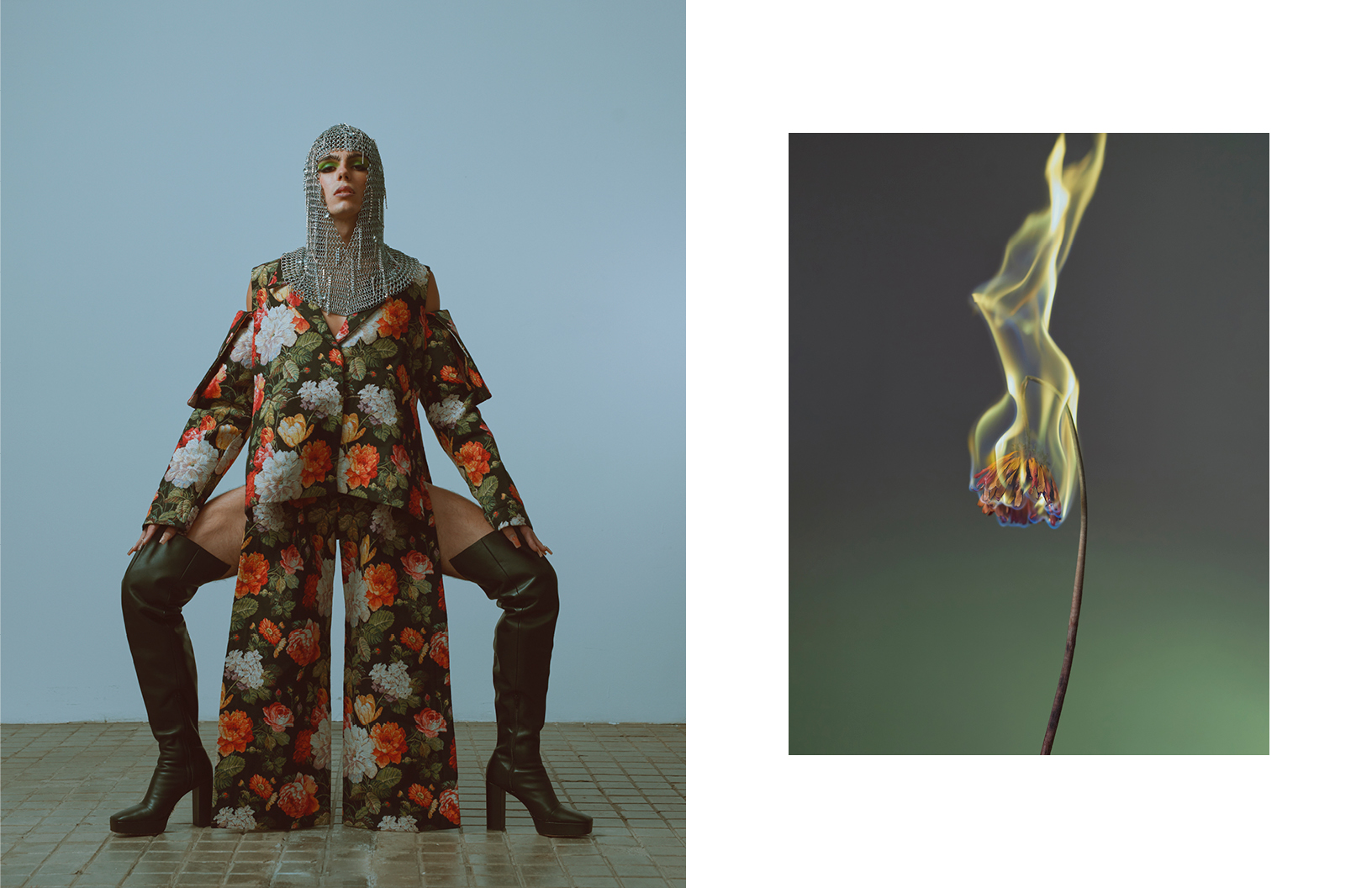 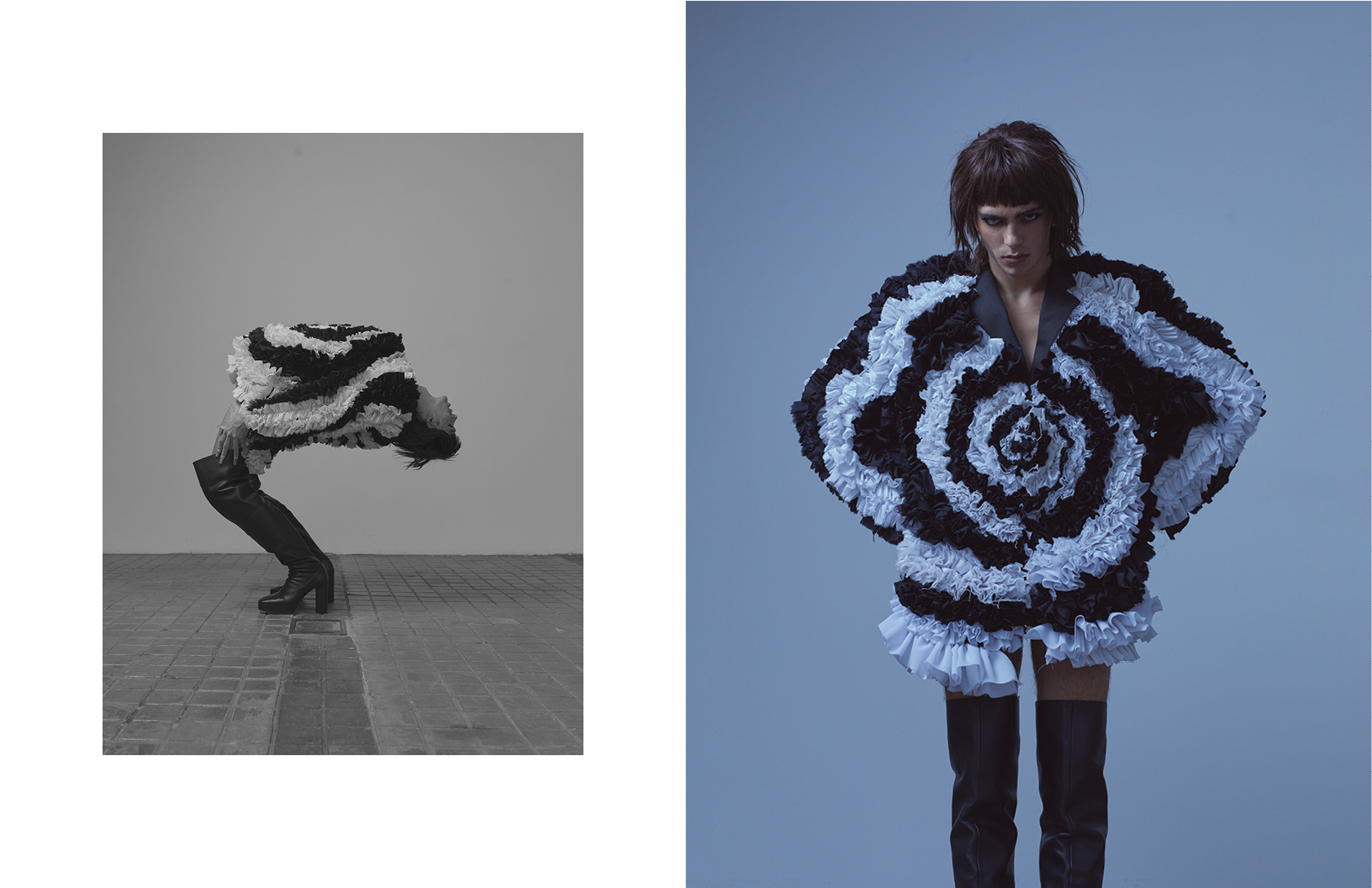 How would you describe the Spanish queer community, and the experience of being part of it?

I would say the Spanish queer community is still beggining to rise due to the modernity of the term and the footprint of the harsh context and consequences of the dictatorial regime we had in the past. My country has a lot of progress to make yet. Being queer in the big cities may be easier, but we cannot forget our sisters from the villages and the provinces. Even so, our community is growing day by day, and I can’t wait to see us creatures taking the public spaces where we deserve to be. Underground is fun, but the queers need to occupy the public highway in the daylight and be a part of the institutions if we really wanna see a change.

How did you form your sense of style? Growing up, who would you say influenced your style the most?

Performance is the answer. Fashion can be a prison, but it also can make you feel released. For me, it’s a playground where I can embody any character I’ve always dreamt of becoming. Sometimes, I wake up and feel like being Pamela Anderson in a mini skirt and some high stripper heels, and other times I feel like Jeanne Tripplehorn in Basic Instinct with those beautiful trench coats and that smoking police look. But definitely, Peppa Pig is my biggest style inspiration: sexy, and yet so elegant. 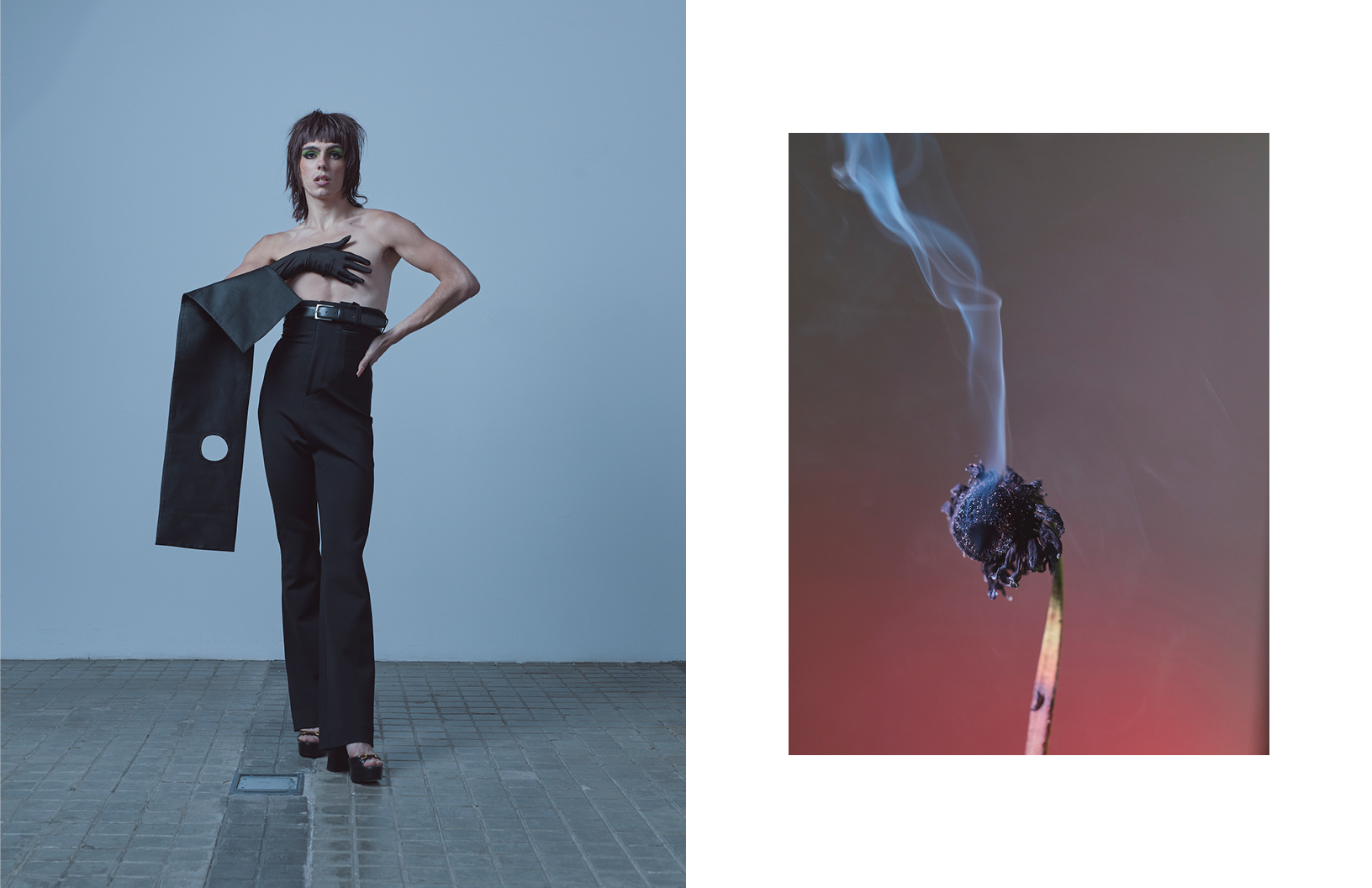 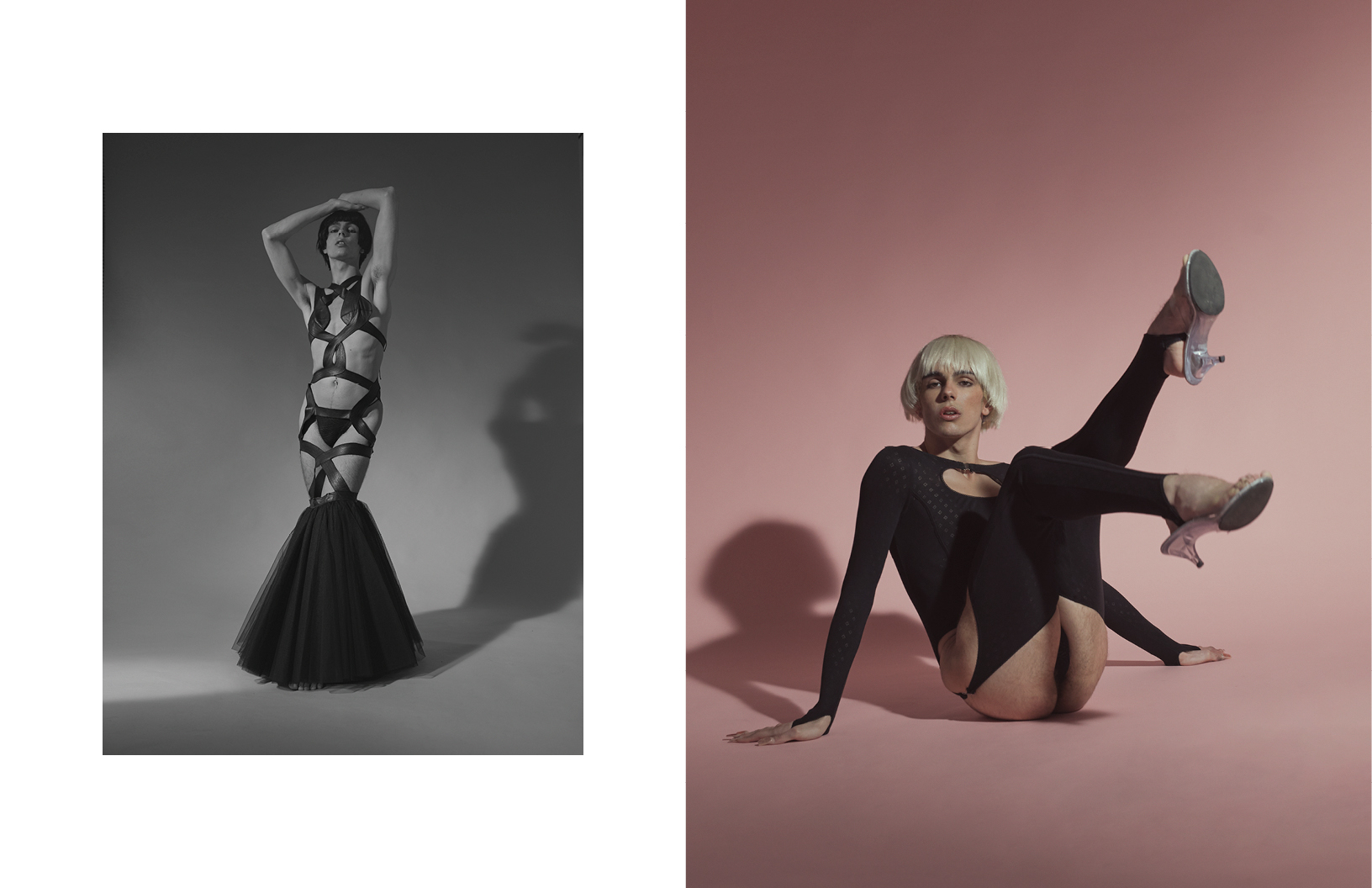 What would you say is the most ‘Samantha Hudson’ piece in your wardrobe?

A 15kg medieval chainmail armour I bought at some historical items store. I passed by and saw a “50% discount” sign and couldn’t resist. I haven’t worn it yet; I guess I’m waiting for the suitable occasion, like a holy war or something. Jesus Christ warriors ready for the battle.

In your fight for LGBTQ+ rights, you use songs, videos, memes and more to spread your message. How did you develop your specific method of activism?

It’s not that I do it on purpose; in fact, I never talk about activism because I don’t think it’s the proper term… It seems to me that when you live in such a lazy and shallow-minded society, and you are surrounded by a culture that rejects diversity in the way we’ve been witnessing these years, being authentic and staying true to who you are can be considered political acts. For some people, existing is activism.

Let’s talk about your track with La Prohibita, Disco Jet Lag. What was the story and inspiration behind the song and video?

It’s the feature I’ve always aimed for, as La Prohibida was one of the artists that inspired me to make music or whatever the hell it is that I’m doing. The video and the song are a bit pretentious ode to the club culture and Spanish nightlife, which has been pretty much dead due to the COVID pandemic and which is the main sustenance for most of us, the drag queens and the transvestites. It’s a cheap science fiction short film about a group of survivors that are resisting a terrific virus that turns you into a farcy and boring human being sheltered in a disco bunker and trying to find the cure for the disease, which seems to be a high dose of dancing and vibing to your favourite tune. 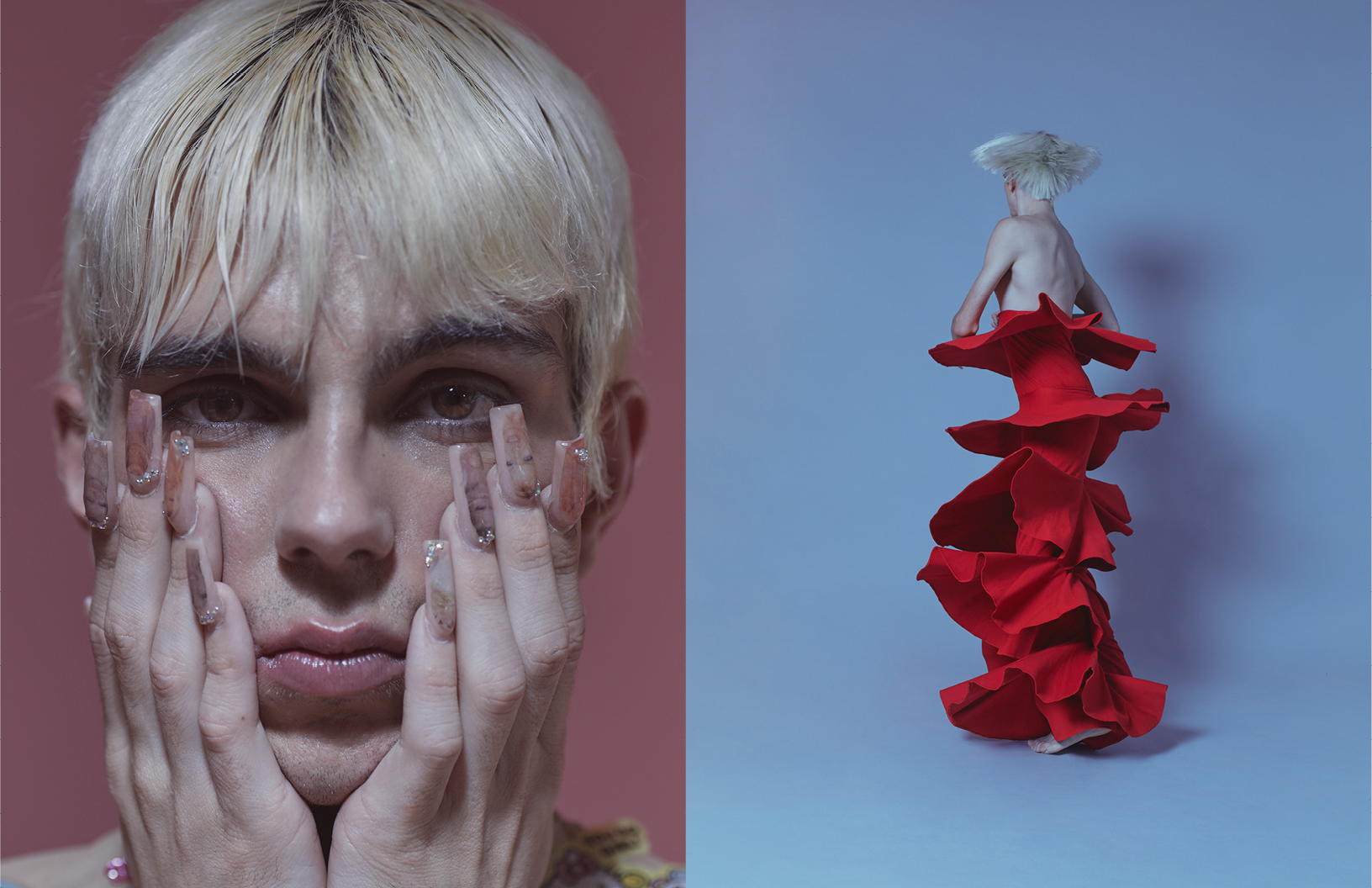 What have you been listening to recently?

What thoughts did you have when you were creating your viral video Maricon, considering that it was your student project? Did you expect such a public reaction? What do you think about it now, looking back on it?

It was completely innocent. I was just trying to achieve my goal of being the Madonna of my high school, but I never thought it would have the repercussions it had. I really have to thank the Catholic Church and the far right political parties for creating my musical career out of nothing. Such a lovely and generous act. Now, looking back on it, I can’t figure out how I came up with such good lyrics. Simply poetry.

How do you feel to be an inspiration for millions of young people whose human rights are violated because of their queerness? Do you feel any sense of responsibility to your fans, and how do you manage that?

I feel responsibility for proving myself and showing the greatest version of who I can be. But I cannot control what others think of me. If you wanna see me as an inspiration, that’s your business. I just wanna do the best I can, like all people. Anyway, I hope my followers don’t take me as a role model, otherwise we’ll have a society full of nasty young ladies dressing like a low-rated bootleg version of Showgirls. 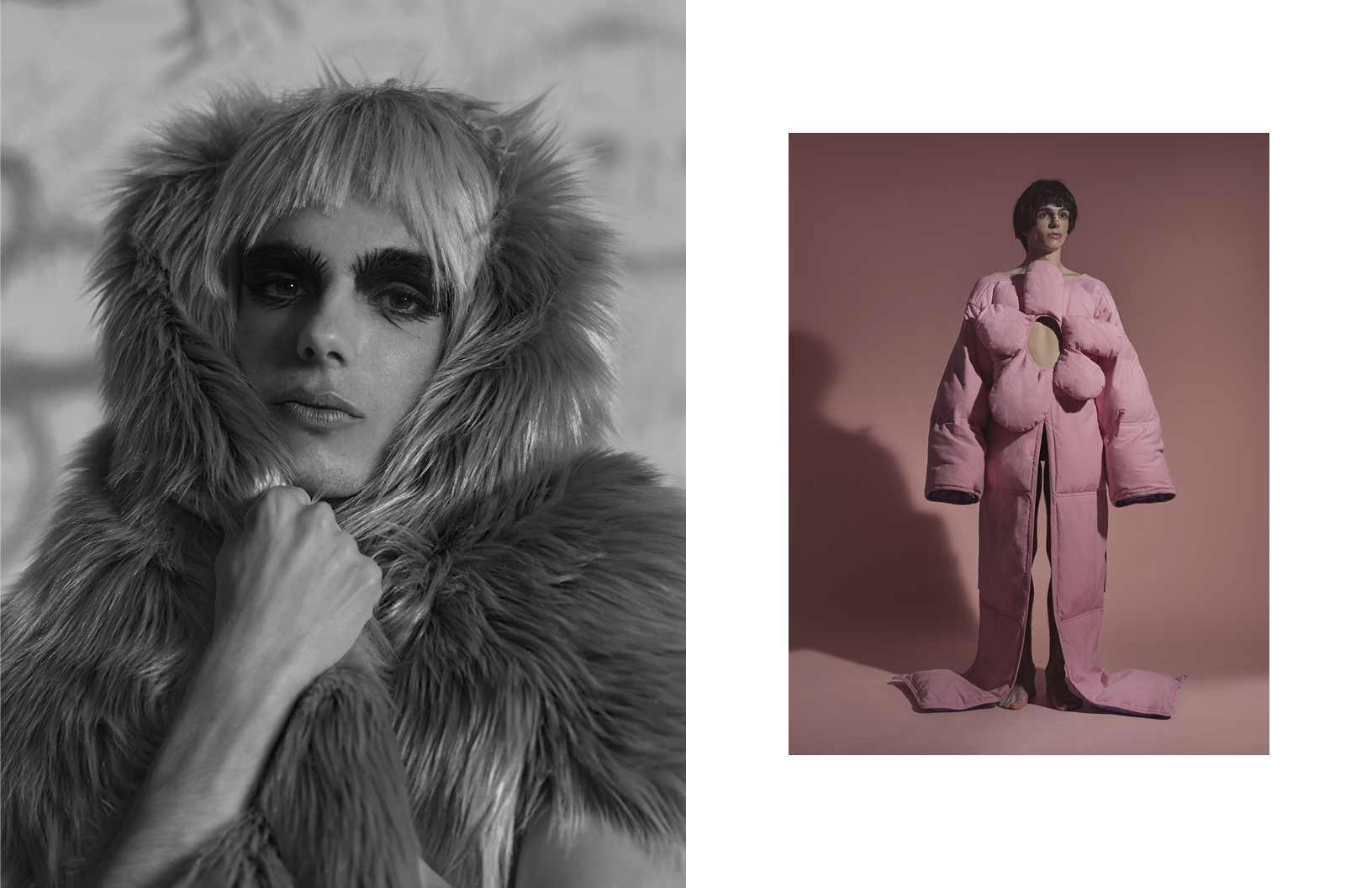 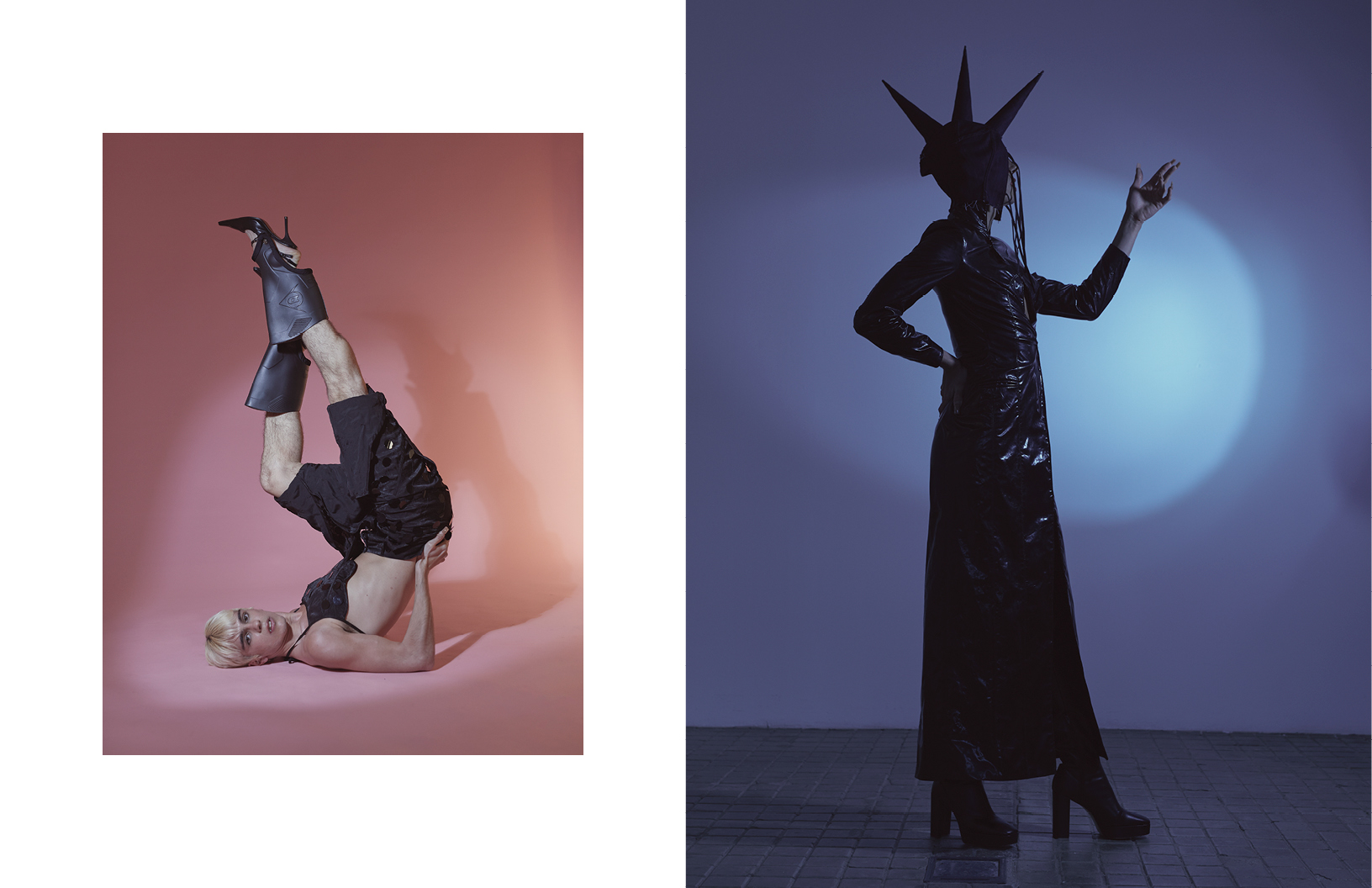 What advice would you give young people who want to speak up for their rights, but are nervous about doing so?

Rome wasn’t built in a day. Don’t be anxious and do not rush, just listen to your rhythm and speak out when you feel prepared and safe in your environment.

You’ve said it’s not necessary to know a language to understand a song. When you listen to music, what do you connect with most? Simply put, what does music mean to you?

Storytelling. If you listen to a tune and you can clearly see movie frames passing through your imagination, that’s a good song.

You make plenty of video content as well!. Are you planning to film and direct more? How does it feel to be involved in many different aspects of the entertainment industry?

To be honest, it’s overwhelming and satisfying at the same time. In fact, I’m suffering terrible back pains at the moment from carrying the whole Spanish music industry on my shoulders. Being a rock star is just an exhausting job.

What’s next for Samantha Hudson? 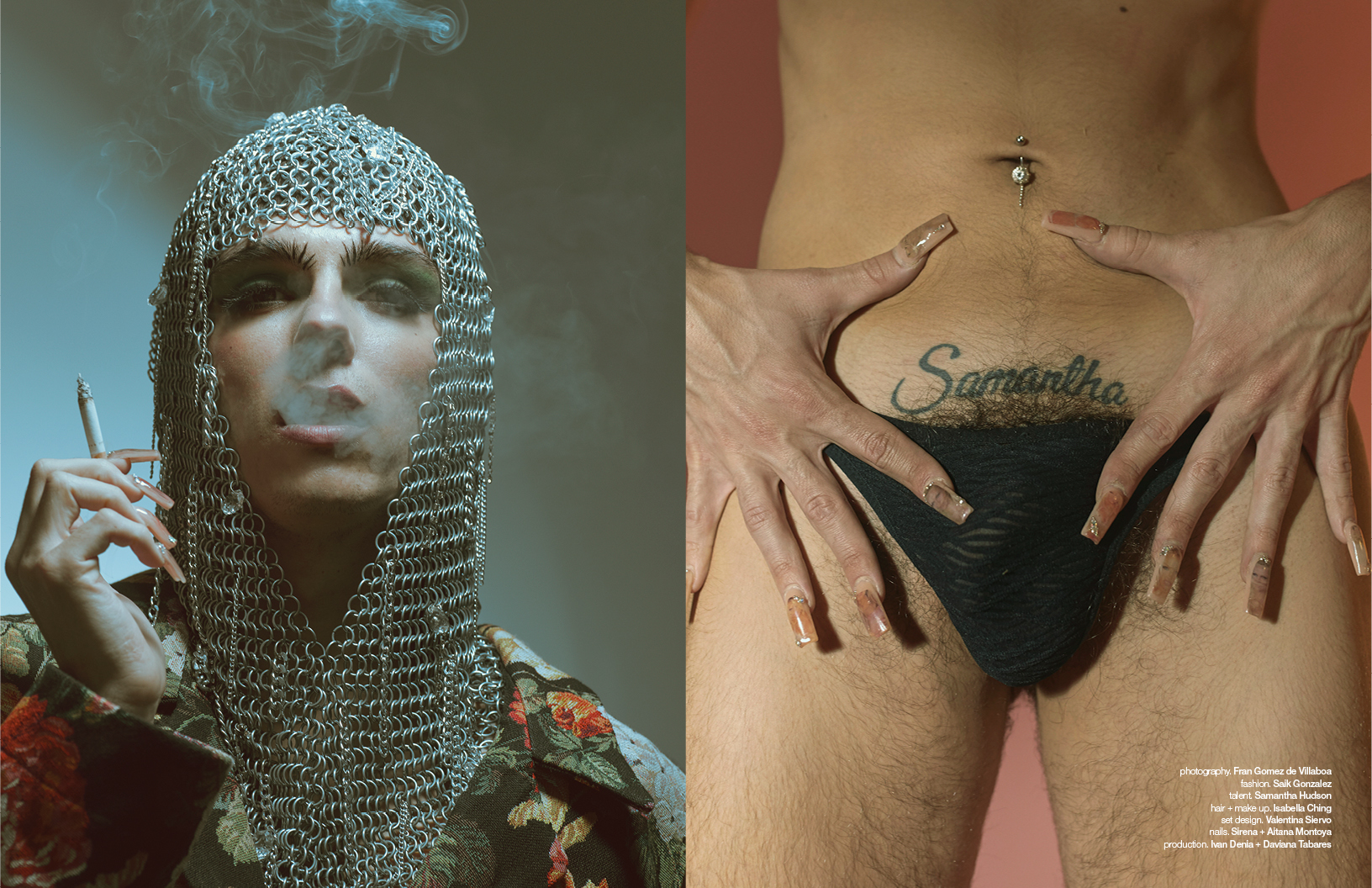