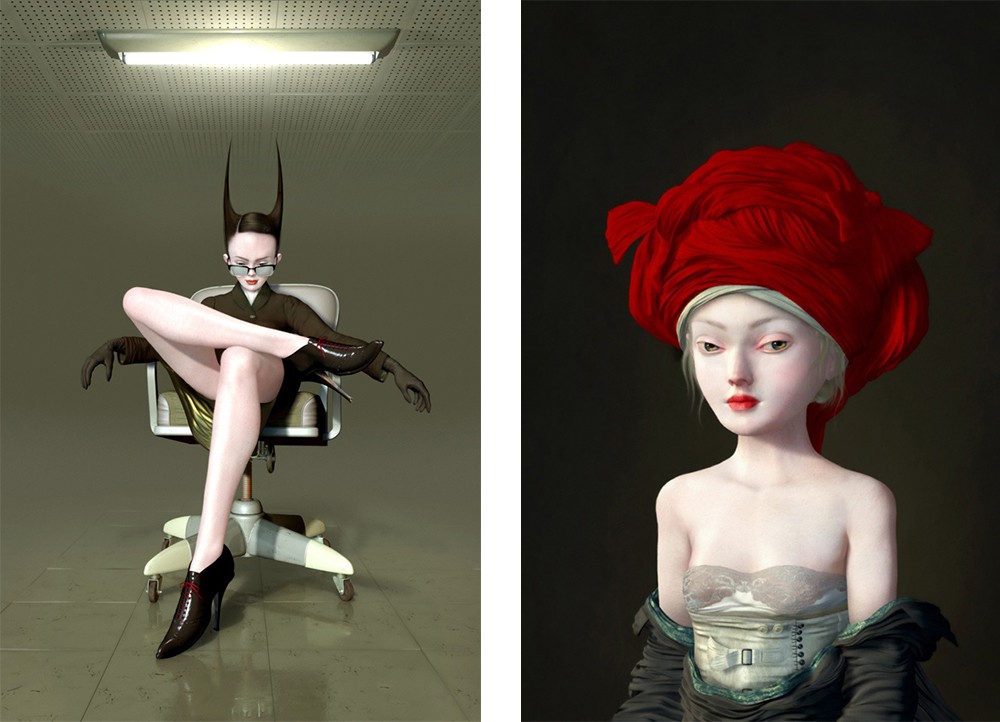 Terrifying sights of injury and disturbing moments of trauma have all been witnessed by London-born artist Ray Caesar. From hospitalised children to his own father’s deformities – Caesar has been surrounded by harrowing sights throughout his life. Using an ever-evolving charecter, whom he believes is himself, the artist adapts these moments of distress into his strikingly mysterious and dark works of art. Recurring virtual dolls are depicted differently from piece to piece, whilst sharing dark characterises, inspired by his past experiences. Cuts, scars and mutations can be seen in Caesar’s images alongside powerful women inspired by the nature of his strong and fearless mother.

Continuously sketching as a child, Caesar drove his skill The Ontario College of Art where he studied architecture and design. Here Caesar didn’t consider his vocation as a career – believing that art is something that needs constant effort and exploration and commitment and that he still has a lot to learn and a long way to go. At the age of 57, Ray Caesar continues to work – creating heart-wrenching and enigmatic pieces, whose surreal figures have Riccardo Tisci transfixed. Schön! speaks to the artist to uncover his inspirations, character building techniques and experiences.

Scars and mutations play a big role in your images. Are they something that have become familiar to you?
We each are a repository of our past and when we create anything we use this vast storeroom of memory and feeling as raw material. There are many kinds of deformity but the one in my Father that gave me the most trouble was the deformity of mind. I think we are very different creatures in our minds eye than what we see in the mirror. The mask and vanity is prevalent in my work and its suggestive of what lies below that mask. My fathers feet were extremely deformed and I remember as a child amazed that when he took his shoes off – that what is underneath is not the same in all people.

Where do you find ideas for the mechanical implants?

I mix mechanical and organic things and items of interiors and objects from the past and they do sometimes end up within the figures themselves. I really don’t make “decisions” on these things as they just happen that way in a process of intuitive play. I sense a recorded memory in items in a antique shop – the essence of the soul that cherished and loved those items of the physical world is still embedded in them.

Are there any experiences from working in the children’s hospital that you can remember and have been directly portrayed in any of your paintings?

My memory and life become the conscious and subconscious material I use to make my work. Sometimes it’s is a relief to unburden certain mind images and memories into a picture. It’s like storing backup data on a hard drive. We know it’s safe and it gives us space to breathe and continue. For me images are like writing a diary, I put in that diary my life. I once drew irons for many years after dealing with a photograph of a child burnt by a hot iron, it was hard to get the image out of my head so I began placing the memory on paper and canvas as I felt that would allow my mind to rest from the pain of it.

It has previously been said that you believe women are stronger. Your images such as Silent Partner, Self Examination and The Manager portray women as powerful characters. Why do you have such faith in women?

I think we all have male and female counterparts. The anima and animus is part of who we are. The feminine aspect of the human species, whether it is in a woman or man is the part of us that nurtures and feeds and creates life and I believe that is the source of empathy which is needed in the care of children.
If our species has any strength it is in our evolving capacity for empathy, it really is our only hope of species survival.

As I look around the world no one can argue that a vast amount of pain and violence is caused by men, I do understand that there are many gentle men or caring men and rational men, but the inordinate number of cruel men is a shame on our gender and our species.

Does this belief come from the women you have been surrounded by within your lifetime?

My mother was a fearless person. Not in anyway a gentle or kind person but she was tiny but strong. I don’t think she understood the word fear and she probably didn’t understand empathy either as she had her own particular kind of psychopathy. Thankfully she was the only thing my Father was absolutely terrified of and that is the only reason I am alive today.

I met my wife when I was 15 and she is the kindest most gentle person I ever met and she astonishes me that single human being can care so much. I balance these two parts of my own experience and place them into my own character as best I can.

Why do you feel the need to bring out the feminine side of the little boys you portray, such as Castor and Prince of Truth?

As a boy of 11 or 12 I used to dress as a girl on occasion so all my work is a form of self portrait.  At first it was just fun in putting on my mother’s wigs and my sister’s stockings and garters but it became a way to cope and to dissociate from the extreme difficulty and danger of my childhood. It was a way to hide a part of myself in a mirror or reflection  as a method of safety. I can remember dressing up once as a airline stewardess and it became apparent I looked like a adult female, in some ways it was a plan to escape my life incognito, jumping onto a Pan Am plane and fly off into the sunset to a nicer life giving out cocktails and fastening seat-belts.

Instead a part of my mind and subconscious escaped into an alter identity. This is the part of myself I put into pictures and in the past It was a way to cope but now people call it art. For me it is still a way to cope. I personally think aspects of our species can be quite ruthless and a little gentleness and femininity might work for both genders.

Using children as subjects, do you hope for viewers to relate to their vulnerability and innocence?

I began doing this when I was a child and perhaps it was my own innocence I was trying to hide and protect. For me I see our species as a child – we are young and we make mistakes and we are in some ways our own symbols or archetypes of spiritual growth. Our species has a lot to learn.

I also feel the adult is precariously balanced on the shoulders of the child we once were. It was that little ancestor who learned to walk and talk and create and survive and I feel my own inner child like my predecessor. Also, working 17 years in a children’s hospital and watching children not get their chance at life humbles me.

I didn’t show any work until I was 45 as I didn’t think of it as Art but more of a time consuming obsession. I am not sure if my figures are children as to me they seem like a kind of spiritual essence that is part of the fabric of who I am and will be until the day I die. If I could use a word for it I would describe it as a kind of possession or perhaps….Haunting!

You render art using 3D software, sometimes scanning in human skin – How did these techniques come about and how does your working process take place?

As a child I played with dolls and in a way I am still playing with dolls but now they are digital and virtual dolls.

I have a mystical approach to giving them life with my soul, my skin, aspects of my face and eyes and its not unlike working a magical spell from some long forgotten book of spells and potions. I model the figures in NURBS ( Non Uniform Rational Bezier Splines)  and set them up for animation in that I can bend elbows and fingers and blend and mix facial expressions from multiple models.

Most recently involved in ‘Pandora’s Box’ exhibition at AFA Gallery in New York and ‘Pretty Little Predators’ at Gallery House, Canada, with newly released work titled Madame R on show, what have been your most recent influences and where do you see your work heading in the future?

I always find it difficult to answer when people ask my influences – I believe the older I get, my work is less about influence and more about evoking what is already  inside me and what causes me comfort and discomfort from my own memory. I think the future will bring an extension of what I have been doing in the past and like any artist I want to grow and improve and possibly even go beyond my own limitations.