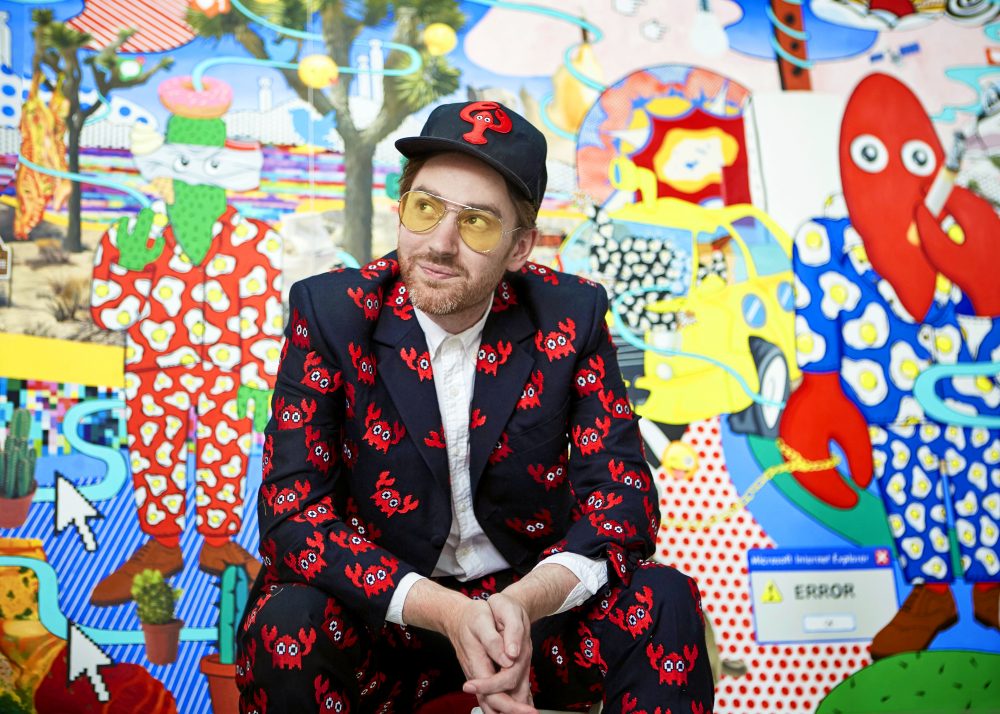 Philip Colbert’s monumental paintings are like nothing ever seen before, but the likelihood is audiences would have seen it all many times before. The Saatchi Gallery’s ‘Philip Colbert: New Paintings’ represent the artist’s first foray into painting, and are bursting with cultural references from disparate realms, bringing together art history, technology, showbiz, politics and mass-production into one cacophonous display. It’s pop art from the 1960’s on speed; hyper-saturation gone mad with the explosion of the internet, which make Warhol’s depictions of mass-media placid by comparison. As Colbert summarises, the paintings “represent the spirit of pop today: a merge between painting, Google searches and Instagram”.

Dubbed ‘the Godson of Warhol’ by American Vogue’s Andre Leon Talley, Colbert is similar to his pop art predecessor in many ways. He is, in essence, a brand: something he fully embraces for “giving art the freedom to be many dimensions”. A staunchly multi-disciplinary artist, Colbert’s practice encompasses furniture, music, fashion and more, in line with his conviction that “art is whatever you want it to be”. 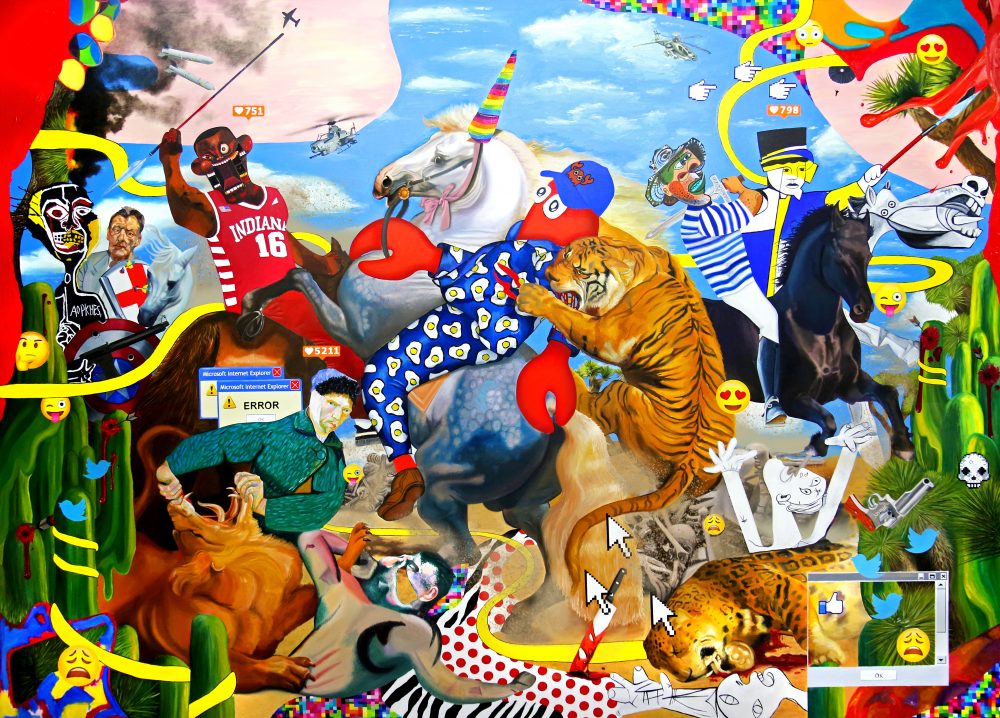 Worn by the likes of Lady Gaga and Rita Ora, Colbert is famous for his designs which appropriate popular icons from art history (from Warhol’s soup can to Van Gogh’s sunflowers) and transform them into wearable, sequin garments. His intent is to debunk the idea of fashion as “a lower form of art”, when in reality “there’s no reason clothing is not a medium of art”. By creating merchandise purchasable in a shop, Colbert avoids the “insulated bubble” which often characterises the art market: “having a bigger reach is a really valuable thing”, he explains.

Every brand needs a logo, and Colbert’s takes the form of an irreverent cartoon lobster, which he calls his ‘alter-ego’. The lobster is the protagonist of these paintings: an anchoring reference point amidst the chaos of discarded crisp packets, iPhones, celebrities, politicians, architecture and art historical icons, to name but a few ‘things’ from the plethora of cultural references that float across the indeterminate canvas worlds. 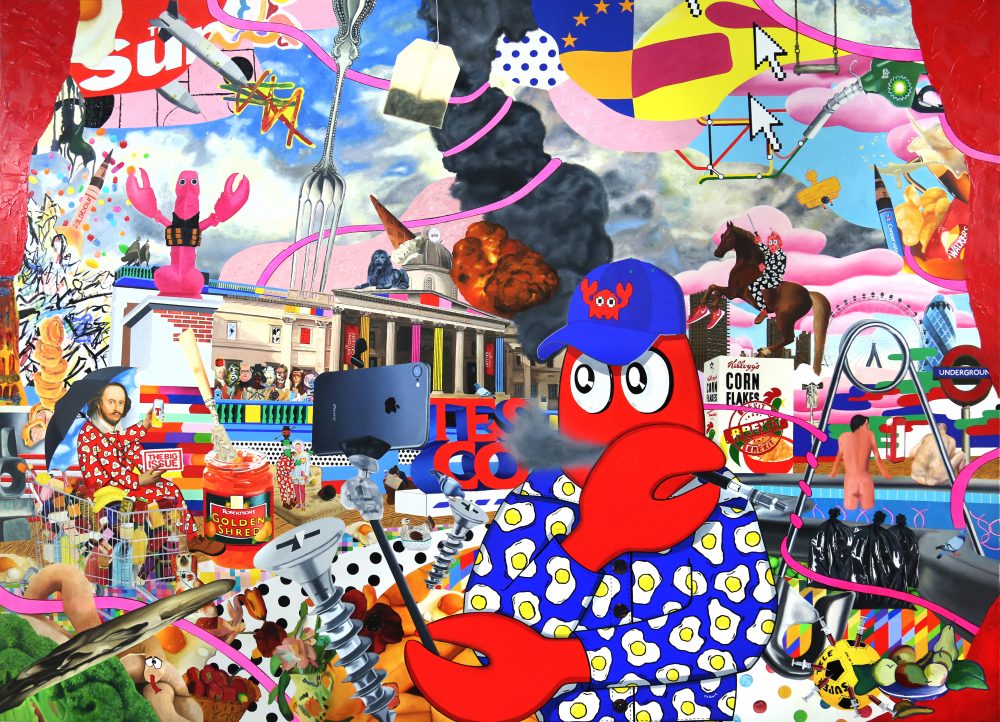 Colbert claims that his “belief in the power of Surrealism and pushing the boundaries of reality” led him to appropriate the ‘lobster’ motif made famous by Salvador Dalí. By painting Surrealist landscapes in hyper-realistic fashion, his art embodies the same paradox as Dalí’s. Yet Colbert goes beyond Dalí by merging the pop element; including the very ‘real’ figures of Theresa May and Damien Hirst in these scenes to blur the lines even more. It’s an effect one might liken to social media; where information and images are constantly being presented as truth, making reality even harder to decipher. The sheer amount of information online, which makes it increasingly difficult to focus on a single point or thing, is also an experience replicated by these erratic, crowded paintings.

As was the intent with Surrealism all along, Colbert’s paintings are really attempting to bring viewers closer to reality, and one of the ways he achieves this is through humour. “Being serious is a bit of a flawed idea because it’s not necessarily closer to truth”, he says. “The truth of it is that there is no truth, we live in an absurd world where we try and derive meaning from things, but there’s an abyss of meaning. That’s why humour is such a powerful tool because to acknowledge absurdity is a closer form of truth than seriousness”. It’s a language partly indicative of Colbert’s elite academic background (the artist studied philosophy at the University of St Andrews), whilst also implying that humour, in the form of parody and kitsch, is how he makes his art accessible, to avoid intellectual ‘seriousness’ or snobbery. 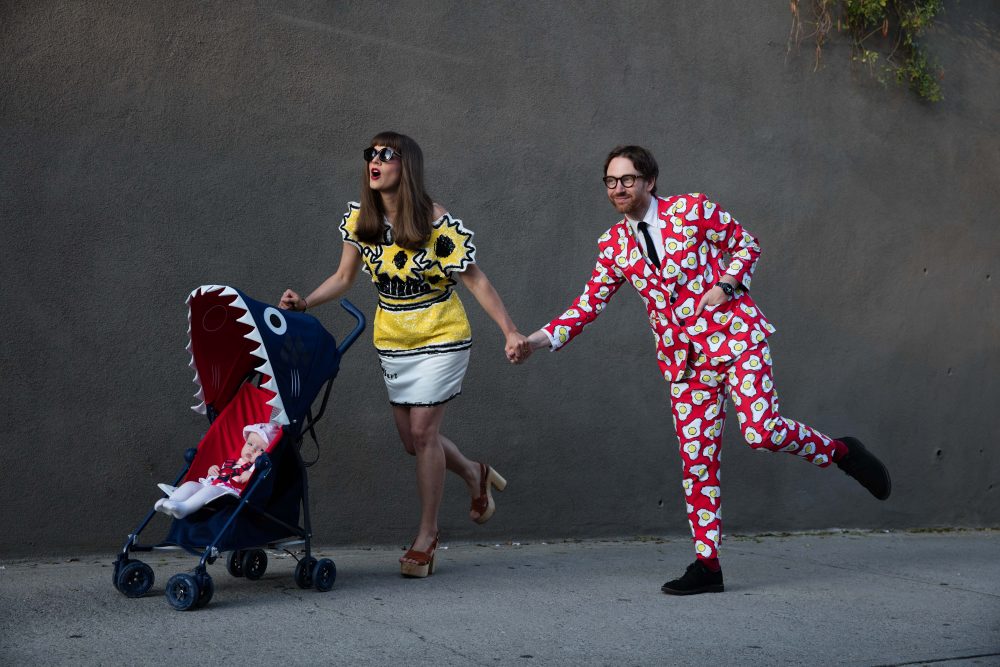 These are all utterly Warholian ideas, yet what Colbert describes as his “philosophy of living the art” is what really makes him the reincarnation of his pop forefather. He gives the example of the suits he wears, which are like extensions of his canvases, emblazoned with graphic symbols and logos. “My life represents my art: when people see me walking down the street, I am the art. I wanted the paintings to be an inside-out reflection of that”, he explains.

Beyond imitation, the iconography in the paintings bear personal significance to Colbert, with elements like the marmalade on toast, Walker’s crisps, or the strewn tea bags forming a “collage idea of how I imagine Britain in a painting”, he explains. It’s, he says, “an honest portrayal of the way I see things; which balances both the positives and negatives of life today”. 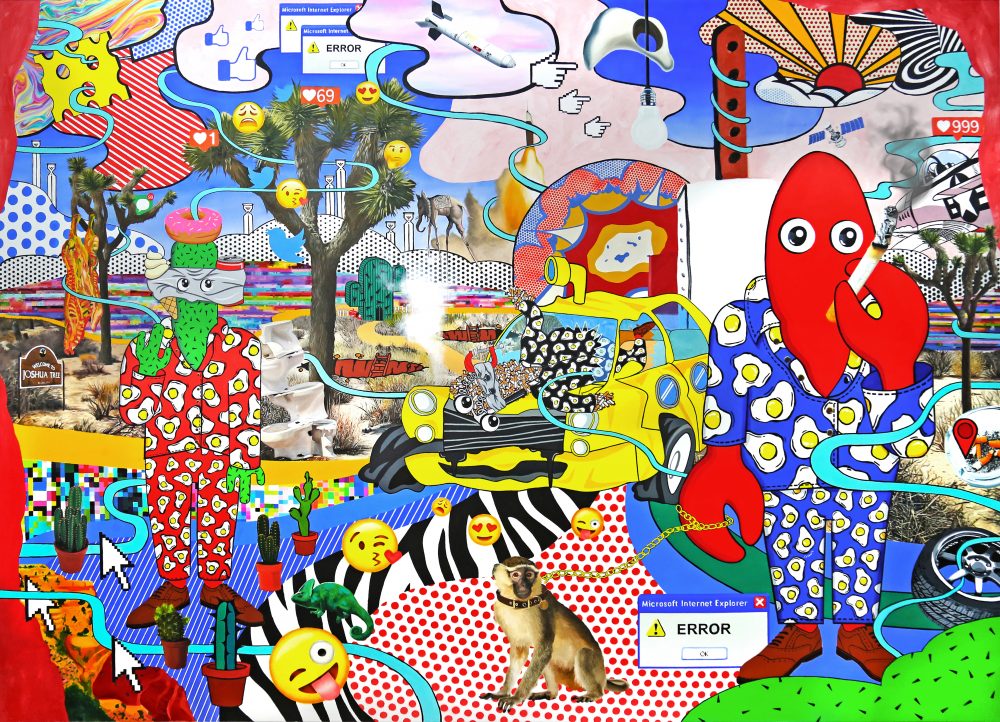 Much more than a visual representation of Britain, the paintings are an homage to art history. “I wanted to make them big, textural, difficult to read on Instagram, and filled with the beauty of painting”. In one painting, characters from masterpieces by the likes of Basquiat, Bacon, Picasso and Van Gogh crowd into one explosive scene, with Colbert himself symbolically included as the lobster at the centre of the work. It’s lesson in art history like never before; a unification of the most unlikely figures under the shared umbrella of human creativity.

To look at these painting is to enter into Colbert’s own ‘pop world’: it can be all-consuming, overwhelming, manic and more than often, a comforting reminder of a common language amidst society’s madness.