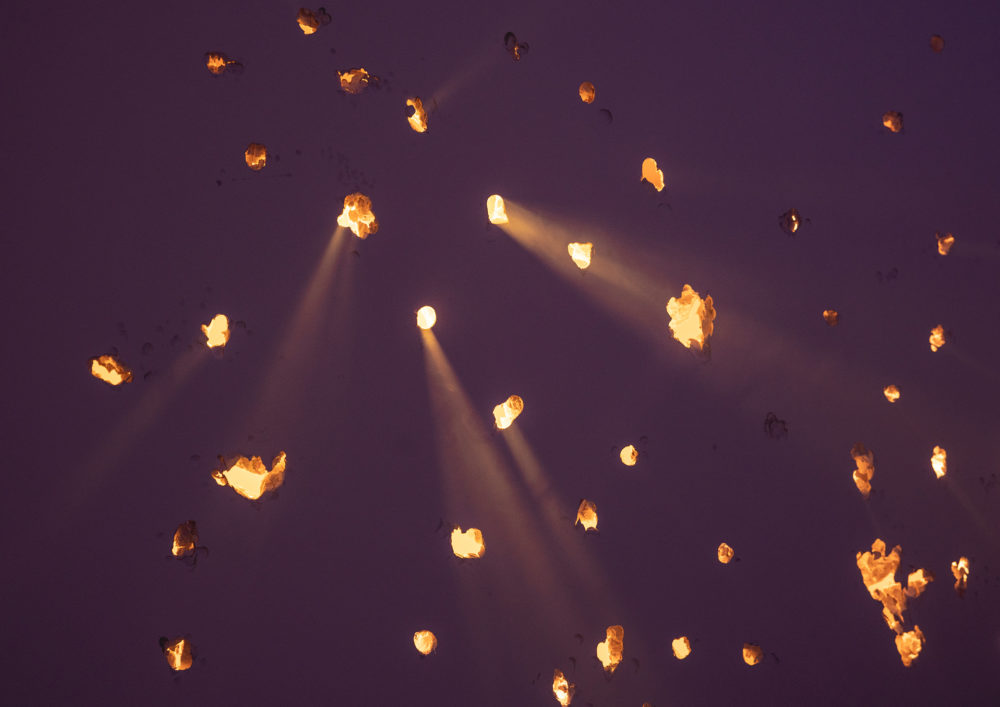 Visual artist Ovidi Benet has amassed an impressive portfolio in the short years he’s been expanding his creative journey. From a childhood spent building treehouses in the Spanish Mediterranean town of Denia to a flourishing career as an artist and design-minded visionary, Benet’s deeply conceptual practice aims to blur the line between art and design.

A recent project from the young artist, “Observatory,” explores the relationship between form and functionality. The experimental work within this project is described as being in pursuit of truth and authenticity using a variety of materials and shapes. Benet’s latest participatory exhibition, “Under Destruction,” uses the concepts of construction and destruction to explore the idea of transformation. The uniquely paradoxical exhibition is only truly created once the viewers begin to destroy it. Small gold hammers are provided to viewers which can be used to create holes in the exhibition wall, revealing a lighting display behind created in collaboration with design firm Vbospagna and studio CuldeSac.

While “Under Destruction” is still on display, Schön! caught up with Benet to talk about his conceptual inspiration, his feelings on contemporary culture and his practice of harnessing his child-like instinct as a purer means of viewing the world.

First of all, especially for our readers who may not be familiar with your work, how would you describe yourself as an artist?

As an artist, I am a simple observer and as a designer a simple designer with strong observation abilities.

You’re both an artist and a designer. Which came first? Do you feel these roles complement each other or sometimes overtake one another?

First came the artist side. When you’re a child, you see things from a pure perspective. You’re not really aware of what you’re doing, you do it on instinct. In art, this aspect is fundamental for the work to reflect truth and be pure. Design has given me the ability to conceptualize.

They definitely complement each other. That impulse of the child artist together with the learning, knowledge, and culture of the adult me. 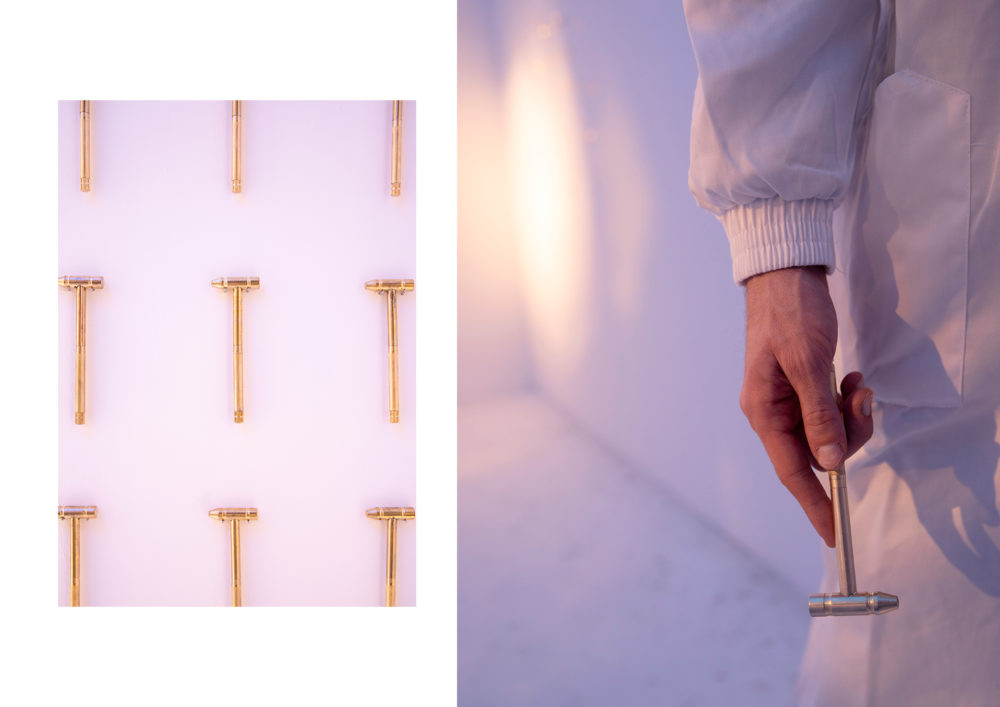 Can you give us a bit of context as to what the story behind the “Under Destruction” exhibition is?

“Under Destruction” is just a translation of the concept that I develop in my work, in which I use the destruction and construction of the elements as a key element to generate a transformation and an object. In this case, the performance deals with the value of the construction of space based on collective destruction. By destroying the space, the installation emerges.

Why is citizen participation so important for you? How and when did you decide to embark on a project like this?

I think it’s a generational thing. I believe that, in this age full of uncertainty, sharing something as beautiful as art should be available to everyone. These are unique experiences that generate individual emotions in the collective. In this case, it was the essential piece to generate work. On the walls, you can analyze people’s moods, their frustrations, reactions and ways of expressing themselves.

What’s the nature of the partnership with design firm Vbospagna and creative studio CuldeSac? And how has it influenced the project?

They have had a fundamental influence on the project. In the case of Vbospagna because, through lighting, one atmosphere or another can be generated. In the installation, after breaking the walls, the secret of “light” was discovered.

The concept was born in CuldeSac and together with Pepe Garcia, the studio’s director, we worked to make the event and the installation a truly memorable experience. 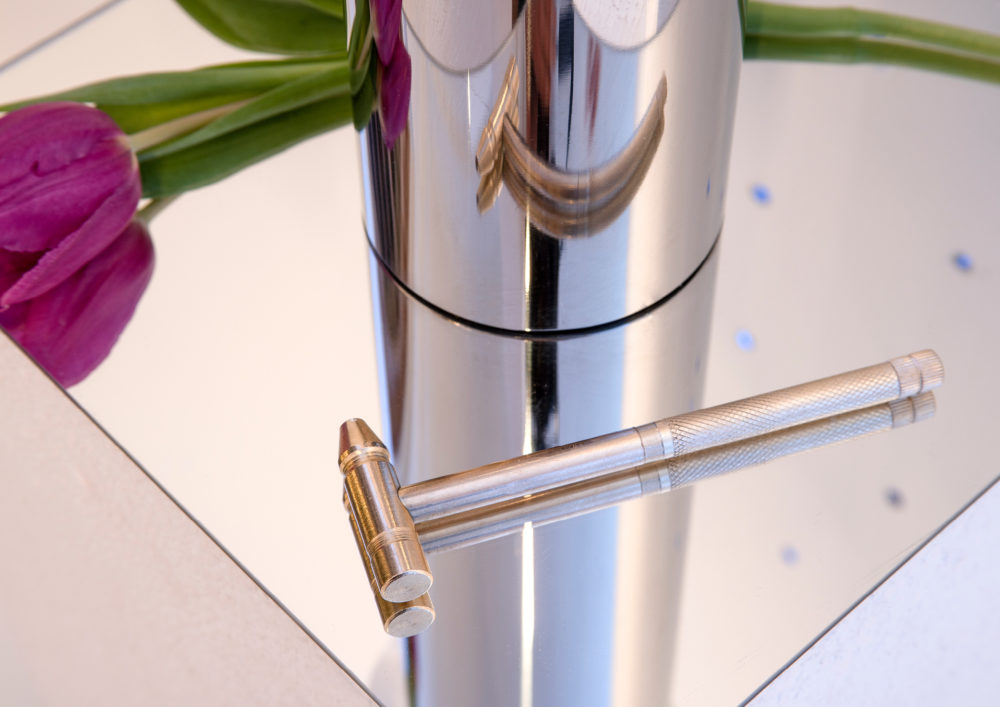 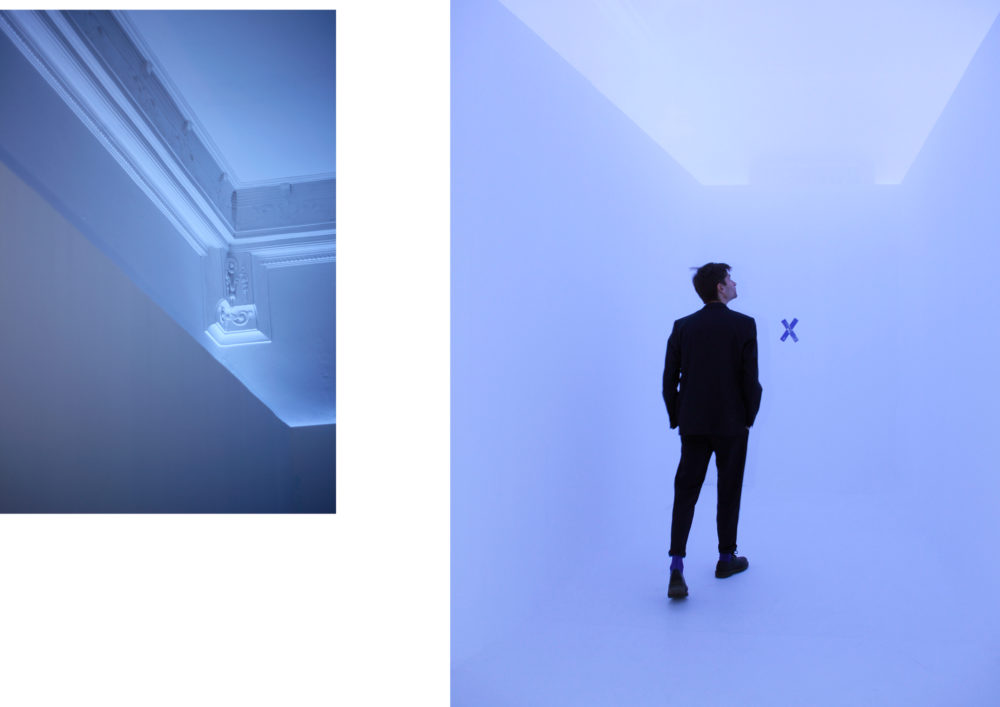 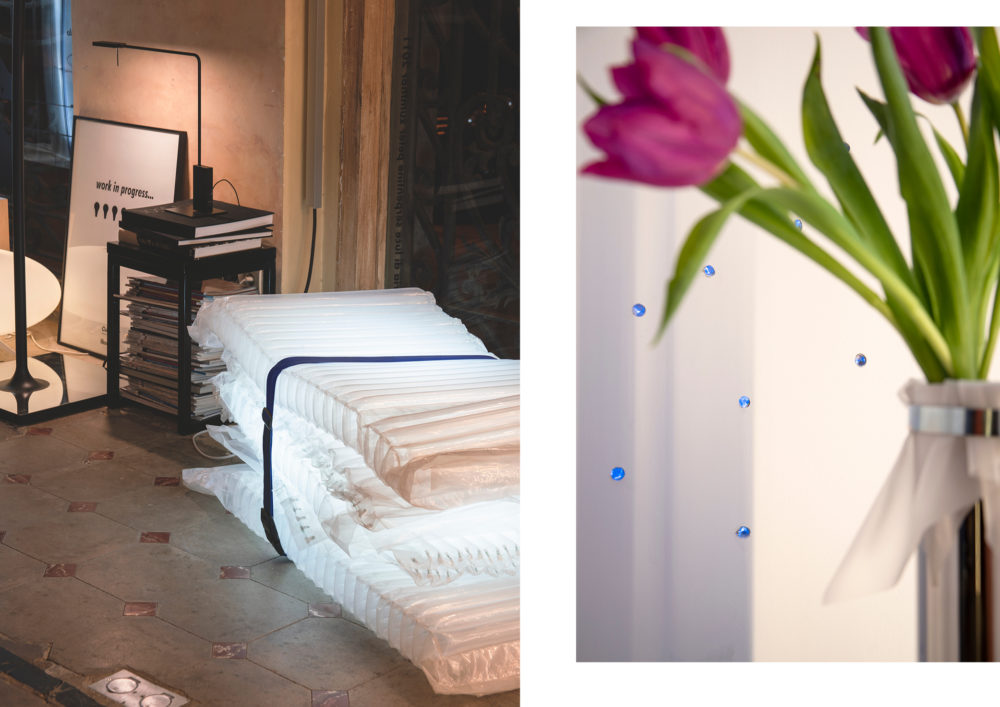 How would you describe “Observatory” and its mission? When did you decide to launch this project?

“Observatory” is an office of ideas, of concepts that fly over design. The way we live and develop consists of observing the environment in which we live and questioning it, but, above all, it is working experimentally with shapes, materials and volumes to break with the usual.

It all started in 2018 when I began to question myself and think about everything around me. My profession, my habits… So I began to respond to that accumulated frustration by making pieces inspired by the “non- object”. This means, an object that fulfills a function, but doesn’t fulfill the form of the common imaginary.

Where do you see “Observatory” going in the future?

I see it generating a message similar to the one that has developed so far. A message that demands a break with the common and what lacks truth and authenticity in the form and thought behind it.

What and who has been inspiring you recently?

Let’s start with the “what”. I’m inspired by the purity of light and nature. On the one hand, my work is full of contradictions, but I’ m inspired by figures from the past like some Roman architect because of their simplicity and the primitive form of the building systems. Artists like Miró because of the simplicity of their forms and how they converse with each other. The designer Shiro Kuramata for his use of materials and perfect relationship with the final object. Finally, the lighting firm Ingo Maurer for its ability to transform an everyday object into a unique object. 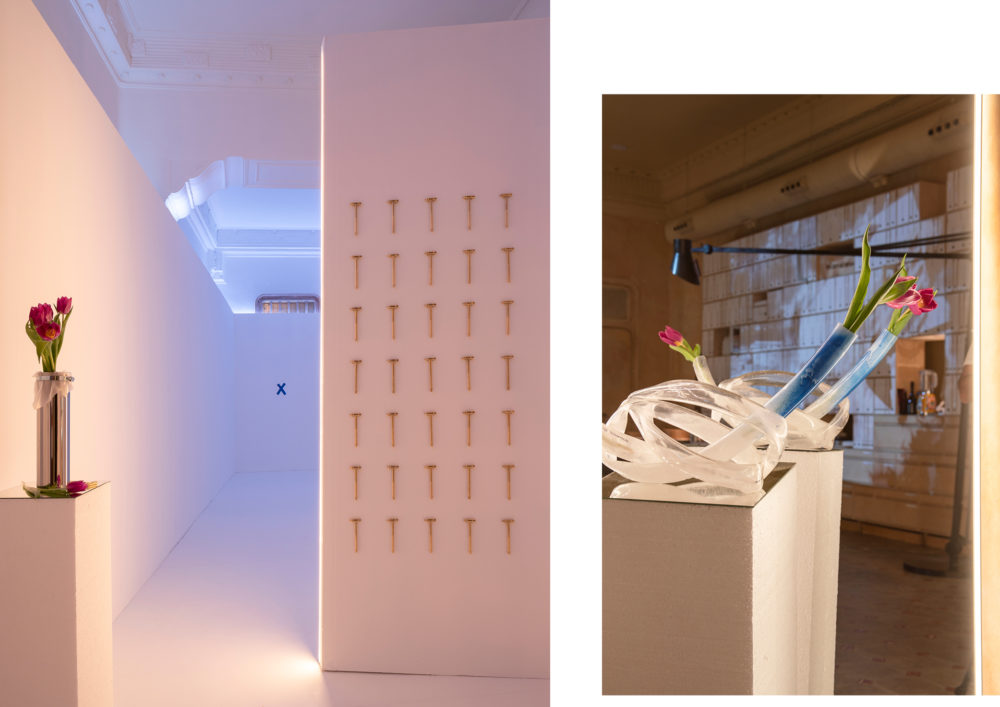 What do you feel are the most inspiring projects/movements in the art world right now?

I don’t see so much movement as facts. The art world is always inspired outside the art world. That is, in life and in the most banal things, and from there it becomes art. I mean, facts like Instagram streaming inspire me to the truth of the street and its frustrations. I also find inspiration in the trash, what we now call “trashy”.

All of these have a common factor, they are answers to the culturally established and they are elements that, at first sight, are rejected and all of this is happening now.

Has your childhood influenced your current artistic practice?

Yes, it has. I spent my whole childhood in a Spanish Mediterranean coastal town, in Denia. Living near the sea and the countryside makes you a free person and observant of everything that people don’t stop to think about, the calm and its forms. I started making houses in the trees when I was a child and ended up studying design in Madrid.

Do you plan to continue exploring the ideas presented in “Under Destruction”?

Of course, but destruction can have a thousand different ways of being represented. This is just one of them.

The reason I continue with this concept is because I consider destruction is part of our lives. We destroy a couple, a friendship, a job, a way of life. Destruction is only the answer to that frustration that involves change and transformation.

What are you most looking forward in 2020?

I hope that the concept will continue to evolve without losing the essence of truth that is intrinsic to it. That my message generates reactions, that it stimulates people’s curiosity and they begin to wonder and seek their answers. 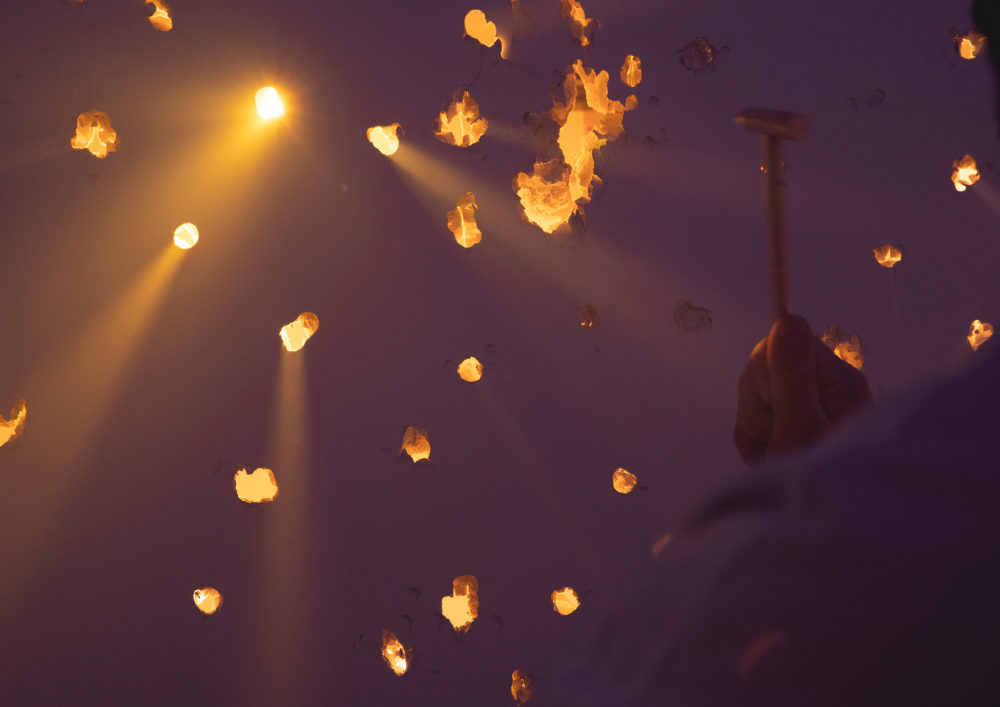 “Under Destruction” is open until March 11 at Vbospagna in Valencia, Spain.