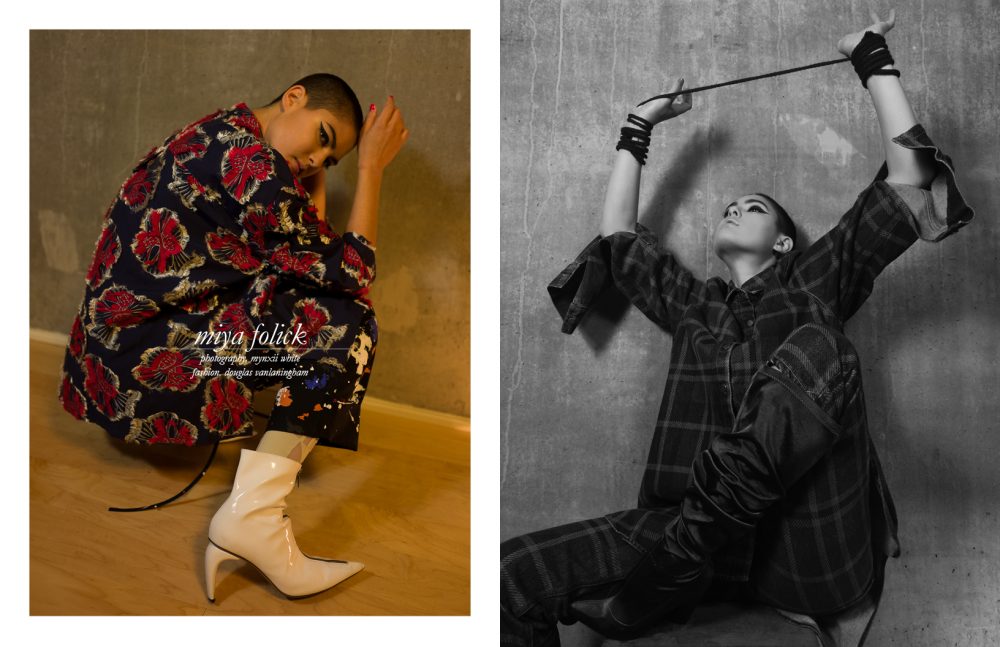 Soulful with swagger, Miya Folick is an exciting LA-based talent. A singer-songwriter-musician who imbues her music with a lingering, ephemeral magic, awash with raw emotion and layered in nuance. Considered lyrics, her sound brings a visceral rush of blood to the head; a texture, a temperature – an articulate authenticity throughout. The self-taught writer and guitarist is not afraid to experiment, the shifting sounds heard on her latest EP, ‘Give It To Me’ – a lingering, poetic triumph where the artist consciously places herself as the solitary ‘observer’. Folick has a playful, elegant style, a keen fashion focus – her own image forever shifting and exploring. Born in Santa Ana, California, Folick was raised Buddhist, later moving to New York to study acting at NYU. She eventually uprooted to Los Angeles, teaching herself to play the guitar and recruiting future bandmates via Tinder. After her triumphant debut EP, ‘Strange Darling’, in 2015; Schön! caught up with her to talk about her latest, ‘Give It To Me’, out now.

You had a Buddhist upbringing. Is spirituality still part of your life? How do you think that has informed the person you are today?
Spirituality is my life. I don’t think you can really separate the two. I think if you’re a person striving to connect with other people or animals or with certain sounds, you are practising spirituality. Somedays I feel more spiritual than others. I feel very lucky that I grew up with Buddhism and with parents who had Buddhism. I think it made them better parents.

Despite always singing, you said you only really found music in college. Can you remember the moment of discovery
I started writing songs on guitar in the closet of a house I moved into when I was 20. I was very embarrassed about it.

What encouraged the move from studying acting at NYU, to going out to Los Angeles alone and teaching yourself the guitar?
I was very unhappy and struggling to keep myself together. It was a move made out of necessity that ended up being fortunate for me creatively.

How is LA different from home?
I grew up in Orange County which is very suburban. There are a lot less parking lots in LA. And it’s much more diverse in LA. 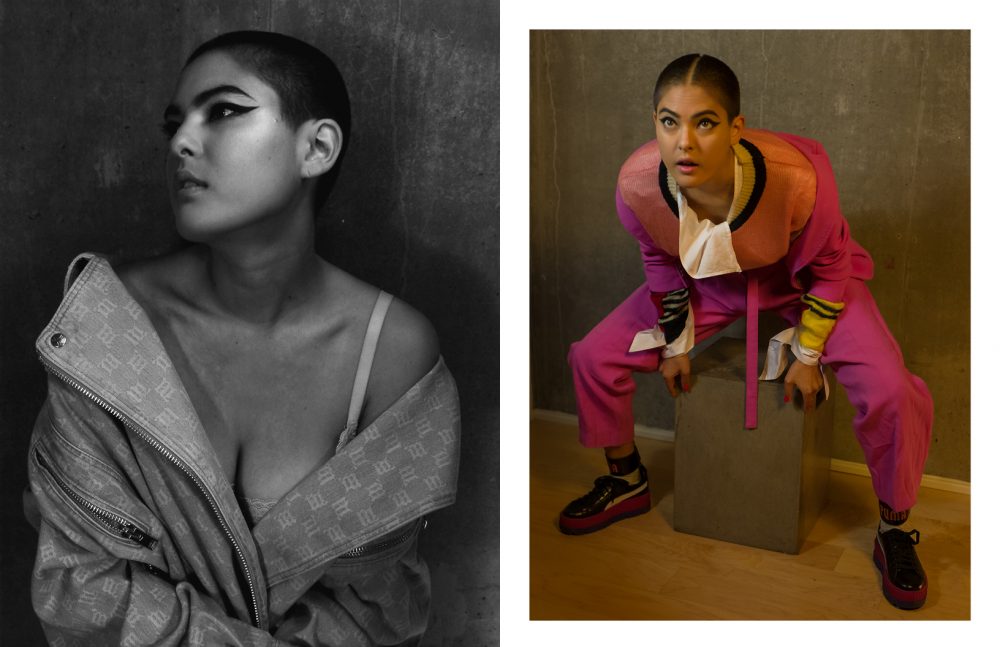 If you could live anywhere else in the world where would you live?
Tokyo. But, honestly, I’d probably just choose LA anyway.

You’re a self-taught musician. Do you think that allows you to be more experimental in your style?
I think it’s impossible for me to know if I’m more experimental as a self-taught musician than as an imaginary more educated version of myself. I also have to mention that I’ve studied with several brilliant voice coaches so it’s not entirely accurate to call me self-taught in that regard. I did teach myself guitar and began writing songs with no guidance. I think being experimental is more of a mindset and anyone can tap into that. But I do think my limitations force me to approach music in a unique way.

What would be your three Desert Island Discs?
Joni’s Blue, Laura Nyro’s Eli and the Thirteenth Confession, and Björk’s Post.

Your EP Give It To Me is about to come out. What were your biggest inspirations?
My friends, Los Angeles, my lonesomeness. 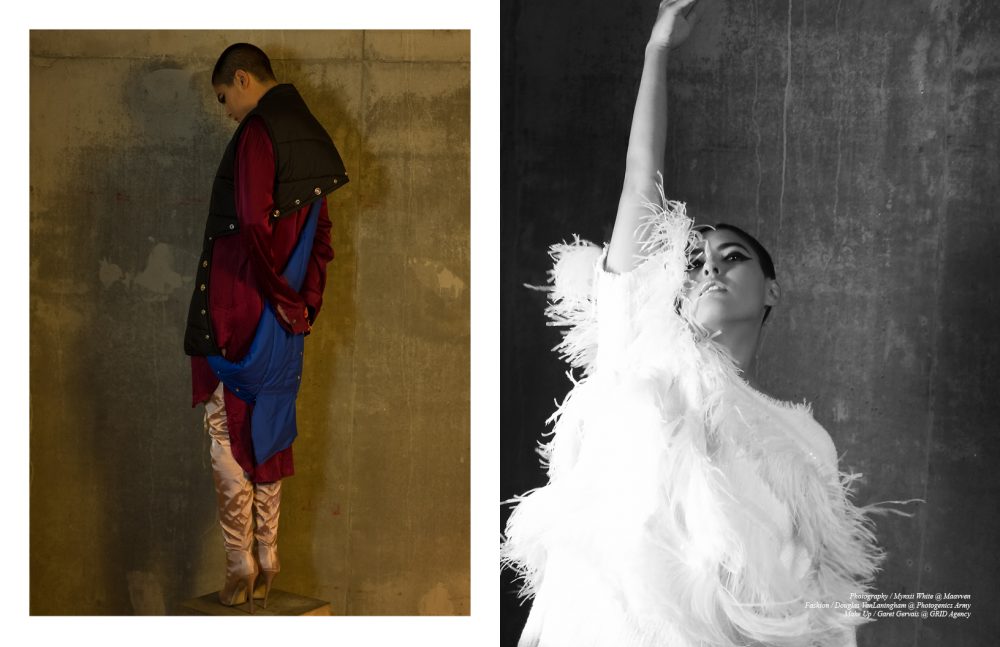 How would you describe your songwriting process? Do you have any writing rituals?
A stream of consciousness. I just sing what is inside me. Then I struggle until the idea becomes a song. I rarely write anything down. While working on my album, we’ve been drawing cards from Schmidt and Eno’s Oblique Strategies every morning and again in the evening. We also burn a lot of incense. I try to avoid too many rituals as I don’t want to feel reliant on specific circumstances to be creative.

Creatively, what comes to you first: the lyrics, the melody – or does it vary?
Melody and lyric always come together for the initial song idea. I’ll usually write all the melodies for the song and some lyrics. Then, I finish lyrics by pacing around or face planting on the ground and running through possibilities in my head.

You have said performing live music is your favourite thing to do. What does it feel like being on stage?
I feel safe and free.

You have a distinctive style. If you had one uniform you could wear every day for the rest of your life what would it be?
Slacks and a romantic high neck blouse with big sleeves.

You have designed these brilliant “God is a woman” clothes for your shop. Can you tell us about how that came about?
The shirts come from my single of that title. But the idea for the song came from my friend Jillian. We were in Joshua Tree and had a very intense mushroom experience during which I cried for hours and decided that I really liked my brain and Jillian didn’t speak at all. She had her hair in her face like the girl from the Ring and was silent. In the morning I asked her how her experience had been and she said “It was amazing. God is a woman.”

What’s the best piece of advice someone has given you?
Let people in.

Lastly, what’s can fans expect next from you?
My first album! Sometime next year.

Miya’s new EP ‘Give it to Me’ is out now. Listen to it here.