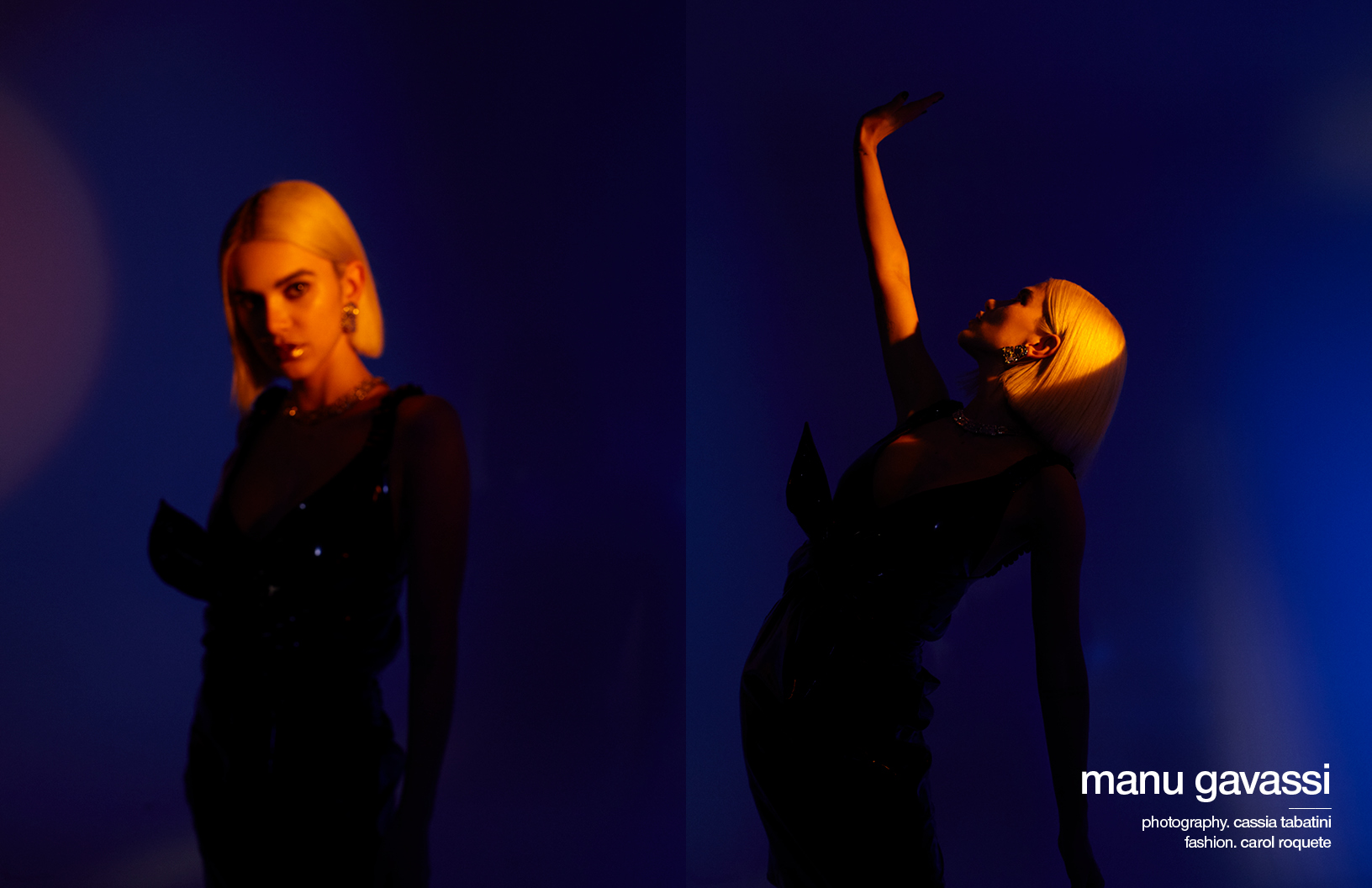 No one is better at being a multi-hyphenate talent than Manu Gavassi. The 28-year-old Brazilian singer, songwriter, actress, director, voice actor, and screenwriter began her career at 16 and now, over a decade later, she’s garnered a loyal fanbase who feverishly follows her every project. With three studio albums, a slew of television and film roles and a stint as a house member on Big Brother Brazil, it’s no wonder why she is one of today’s biggest international talents.

When growing up in show business, it’s not uncommon for teen stars to get caught up in the allure of being famous as they step into adulthood. But for Gavassi, her work has never really been about being a celebrity.

“I started my career so early on and have been through a lot of scenarios, between acting, singing, writing, and social media, I don’t have any illusions with glamour or fame,” Gavassi states. “This is a hard job like any other one, except that I have to use my imagination more. I’m super grateful that I’m able to work with what I love the most, which is art, and that I’m constantly reminding myself that this is where I want the attention to be, always.”

Focusing on creating meaningful work rather than being a celebrity has made Gavassi’s career thrive. Soon, she’ll be starring in Netflix’s Maldivas, a show that Manu summarises as a story about a “group of rich women living in a fancy condo in Rio de Janeiro. They all have secrets and want to desperately hide them from each other.” Gavassi will play Milene, the “Queen B”. Manu describes Milene as someone completely different from her, which is what initially pulled her to the project. “I’m kind of tired of being myself, so it’s a really fun experience.” Most importantly? “Her wardrobe is amazing!” 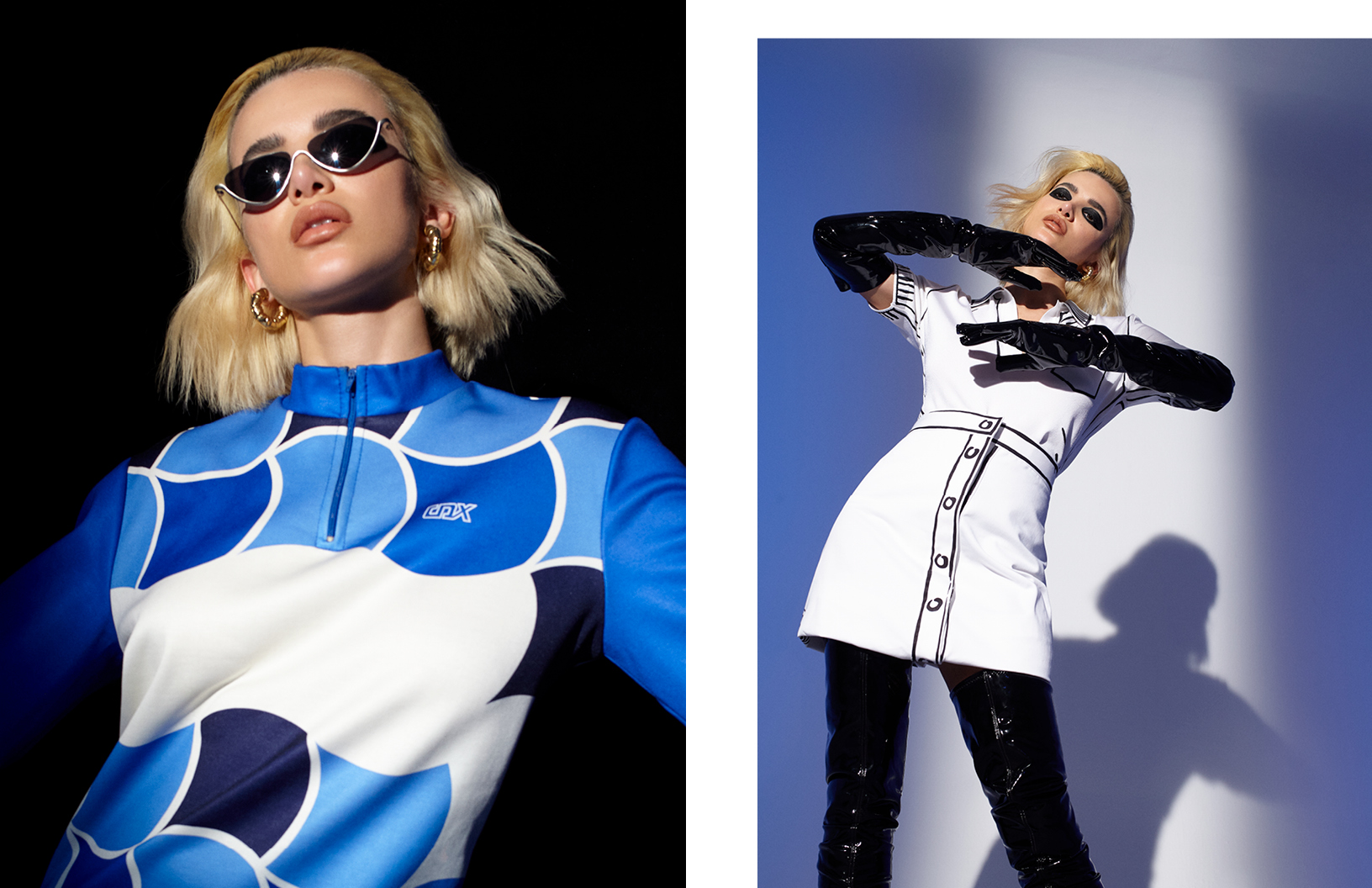 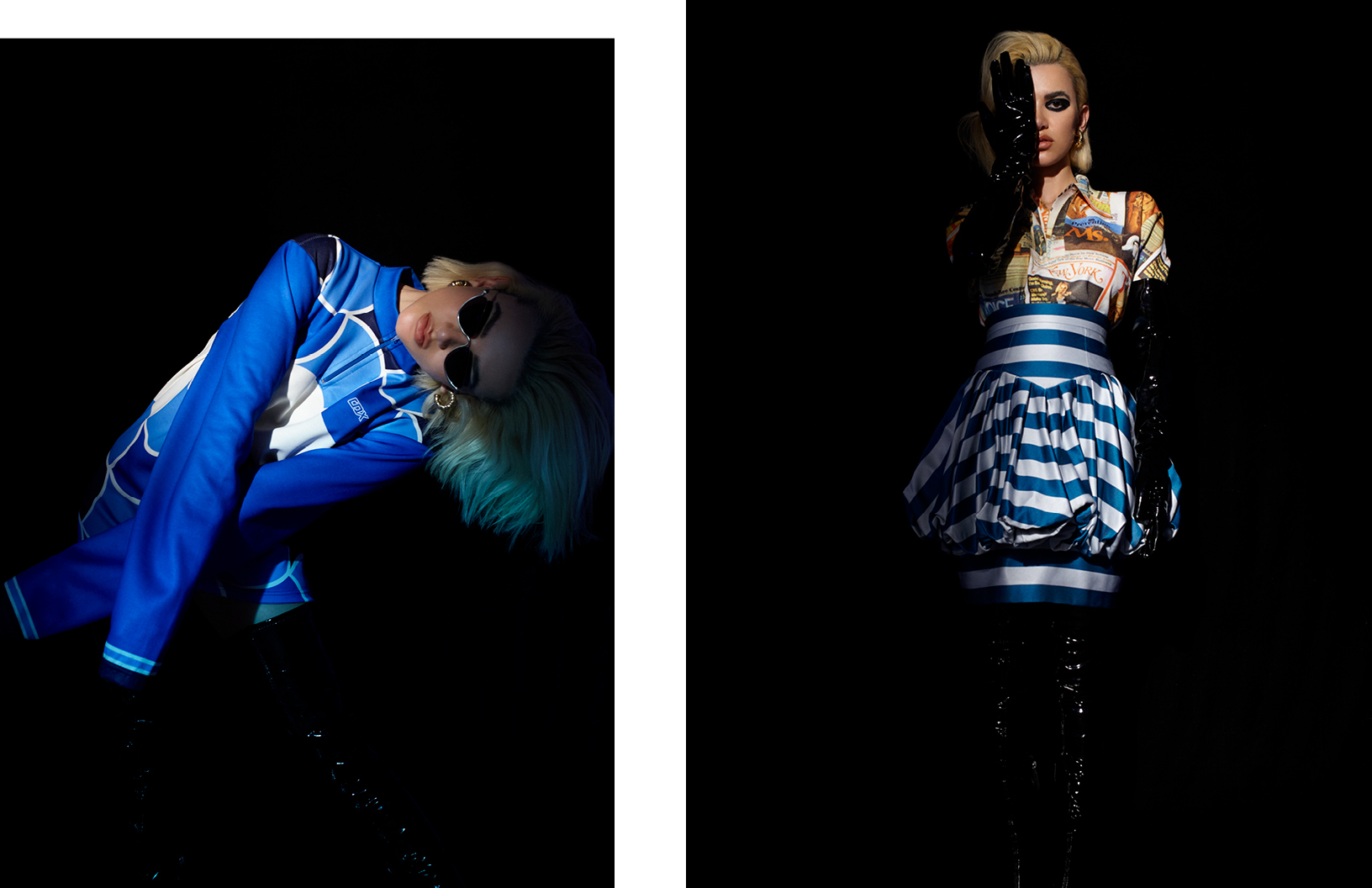 Right before the world shut down at the start of last year, Manu was one of 20 contestants on the 20th season of Big Brother Brazil. Although she ended up coming in third, her out-of-the-box marketing plan and fashion choices throughout the series set her apart from her fellow contestants. “I’ve used fashion as my biggest ally since school. It’s way more than labels for me; it’s my way of having fun with myself, showing people my personality and finding self love,” she describes. “I really like to shop in vintage stores because I think all the clothes tell a story.”

Manu understands the significance of storytelling; in fact, it’s become the thread that ties all of Manu’s projects and passions together. Before joining the Big Brother House, she pre-recorded 130 videos to be published concurrently while she was inside. “It was an amazing opportunity to show Brazil that I had so much more to show as a creative mind,” she explains. “I thought if I’m going to the biggest reality show in the country, the only way that I can show my work and not only my personality is being in two places at the same time, the reality show as obviously myself, and the social media as the character that I can decide, write and record.”

Knowing people are seeing two sides of you while you’re stuck on a reality TV show with no ability to communicate with the outside world could prove risky. But for Manu, it paid off: she broke the voting record, and her campaign caught the attention of some of the biggest corporations and stars in the world — Dua Lipa, to name one.

Even though “Instagram didn’t even exist when I first started working at 16”, as Manu shares, it has since embedded itself throughout her work. “I don’t remember having a career separate from social media, but I have always been very conscious about what I want to show people and what is private,” she says. What is most important for Manu, though, is having people see her for who she really is. “I like it to be natural and true,” she says of her social presence. “[During Big Brother Brazil] people could finally see my heart and my work at the same time.” 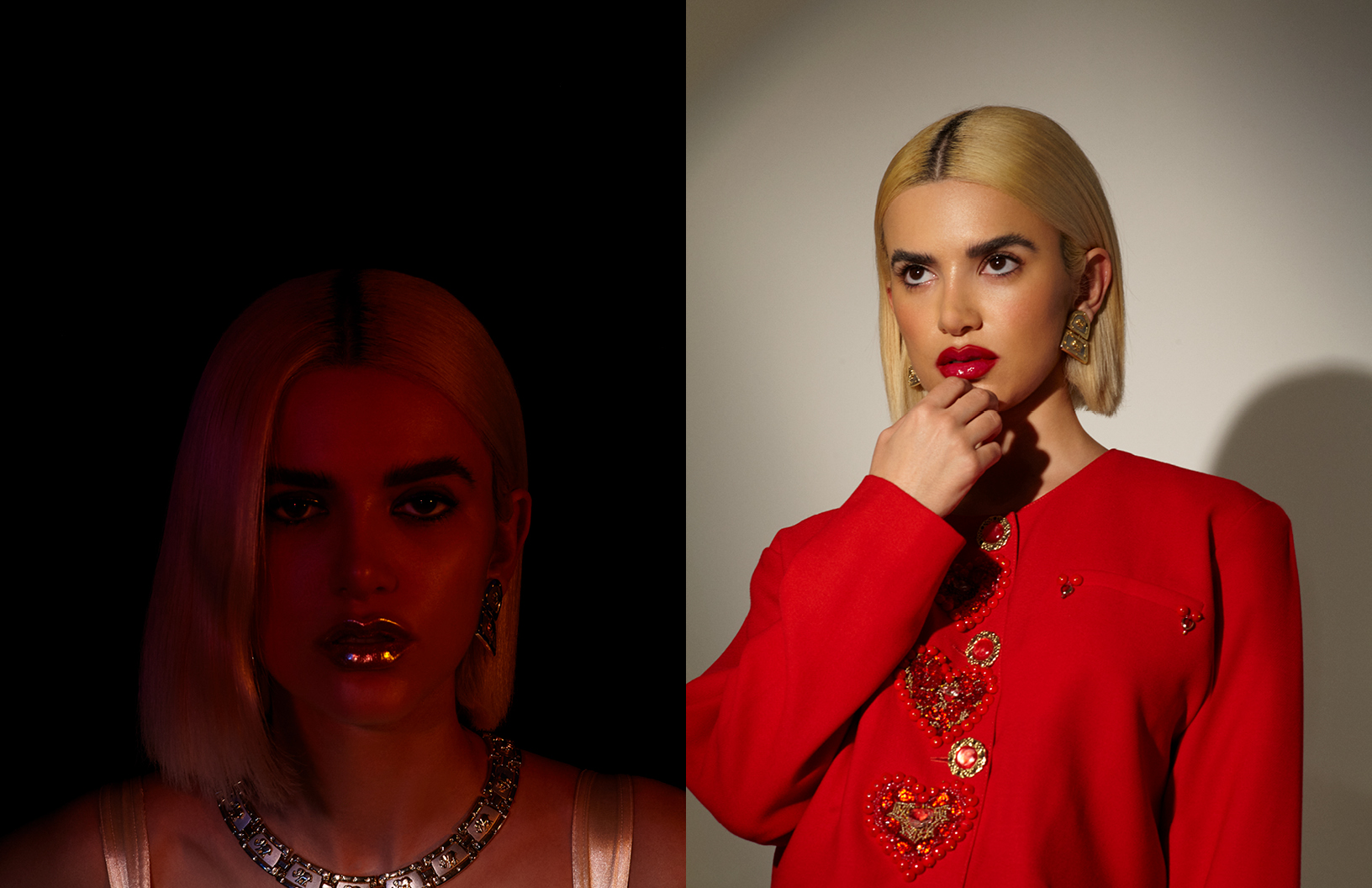 2021 marks eleven years since she released her debut self-titled record, a body of work where one can see Gavassi’s growth as a creative artist and as a businesswoman in charge of her own career. “Creativity is the common denominator in all that I do,” Gavassi passionately declares. “From writing to singing to acting to creating branding content, it’s storytelling. I don’t sing and then pay people to create the concept for me. I create the concept and the story, the lyrics, the image, and then sing.” When Gavassi’s inspiration Taylor Swift is mentioned, she recalls how Swift’s work ethic and confessional songwriting has been inspirational to her throughout her career. Mentioning the correlation between Swift’s creativity and her own, Manu says, “That’s why people pay attention to me, and if I lose this, I think I’ll lose myself. I admire Taylor for always being true to herself and her work.”

As a pop singer and songwriter, it’s only natural Swift and Selena Gomez are two of Gavassi’s biggest inspirations, with the latter giving Gavassi some of the sweetest moments of Big Brother Brazil when she gleefully broke out in a song and dance as Gomez’s songs played. “I grew up with pop artists. I think they are almost my friends…. Except for the fact that they don’t know me at all!” she laughs.

Entering stardom as a teen meant Gavassi didn’t exactly have people around her who could relate to what she was going through, but she did find a pseudo-kinship with artists like Swift and Gomez. “I’ve always looked up to them because I started very young and it is a difficult environment,” she recalls. “I’m still growing. I’m less scared of trying now. The criticism really got into my head over the last decade, and I’m only now falling in love again and making peace with my music.”

As Gavassi enters a new chapter of her career, she is embracing it by reflecting on her journey and figuring out where her creativity will take her next. “I’m taking my time at discovering who I am right now,” she notes. “It’s been a while since I’ve released an album so maybe it’s time for this step […] I’ve been listening to a lot of Brazilian music too, especially from the 70s. It’s precious to embrace our roots and learn with the past. It has been inspiring me a lot.”

After such a huge year, one might be wondering what else she could have in the pipeline. “I really don’t know. And I’m absolutely happy with the present moment. I hope that I can be this way forever,” she confidently replies. As a woman who has been navigating her career on her terms for well over a decade, one could bet that whatever project Manu Gavassi chooses to tackle next is guaranteed to be incredible. 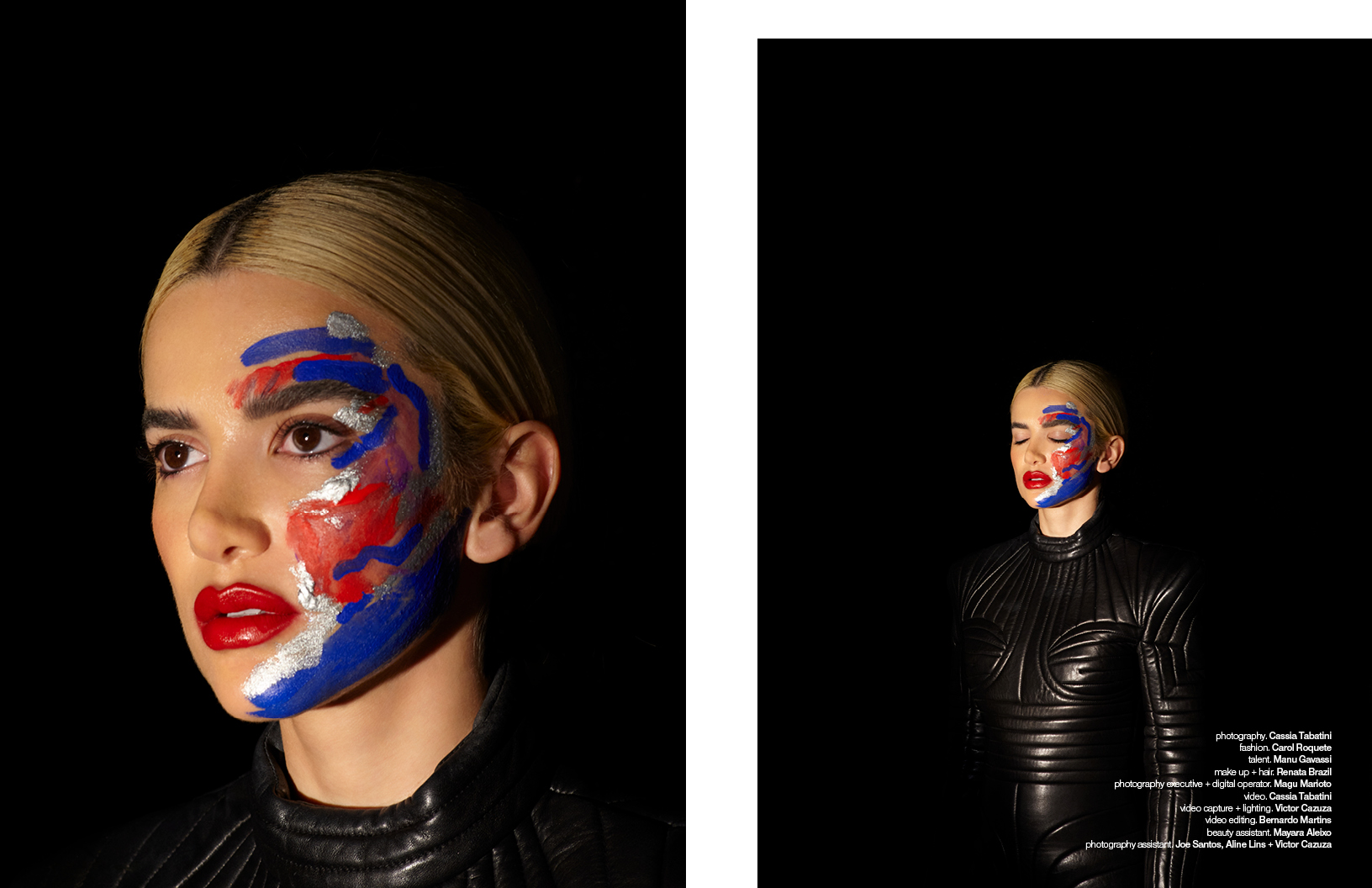