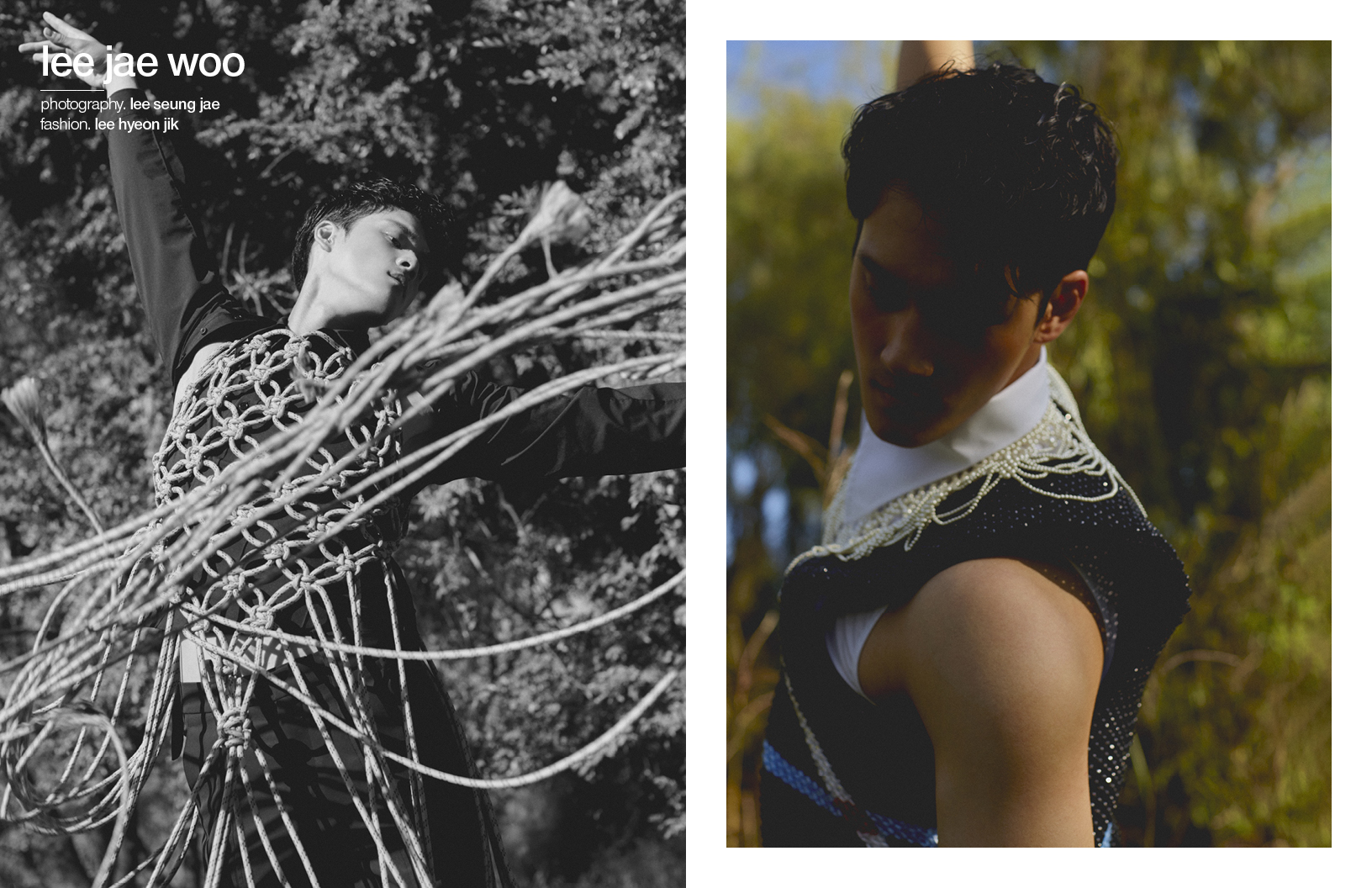 Lee Jae-Woo is a principal dancer at the Korea National Ballet. The cultural industry in South Korea has been impacted hugely by COVID-19, and ballet is not an exception. Even in these challenging times, Jae Woo Lee’s passion for ballet is unwavering. He says he really misses being in a practice room. Schön! spoke to Lee about ballet and his career, including his heartfelt advice for the next generation of ballerinos.

Can you introduce yourself to the Schön! audience?

Hello, everyone. I am Lee Jaewoo, a principal ballerino of the Korea National Ballet.

The Korea National Ballet is composed of four ranks: corps de ballet, demi-soloist, grand soloist, and principal with the principal being the highest rank. Each rank has its own sub-ranks. For example, in the case of demi-soloists, the Ballet has demi-soloist 1, 2, 3, and 4. The greater the number, the higher the rank. In 2014, I was promoted to a principal 1 from a demi-soloist 2. That was a huge jump, and I obviously didn’t see it coming. I should say, however, as far as I know, a case like mine is not that uncommon in other national ballet companies. Some ballerinos start as a principal dancer right away upon joining. I heard that my case was a first in South Korea, so I can understand why people see it as unprecedented.

Suejin Kang, the Artistic Director of the Korea National Ballet, announced the promotion right after your performance in Swan Lake. How did you feel when you heard the news?

I was happy because we had just finished our Swan Lake performance in Seoul. Then, I saw Director Kang coming to the stage with a mic in her hand. That rarely happens, so I was thinking to myself, “What is going on here?” The Director started to introduce me to the audience and announced my promotion, which was quite unexpected. To be frank, at that moment, I was too stunned to process the news. It was only after I saw the word “Principal” next to my name on the bulletin board of our practice room that it truly hit me. I still have fond memories of that day because my colleagues wholeheartedly congratulated me.

Director Kang is an internationally renowned ballerina. Can you share what you learned from her?

Director Kang is an amazing person. She also has a great sense of humor. But, when it comes to directing ballet performances, she pursues perfection and is unrelenting. She would make us practice until we mastered the smallest of all movements to her satisfaction. In terms of technique, she especially taught me how to make better use of my fingers, elbow, and torso. Thanks to her directing style, I’ve become a mentally strong person as well. 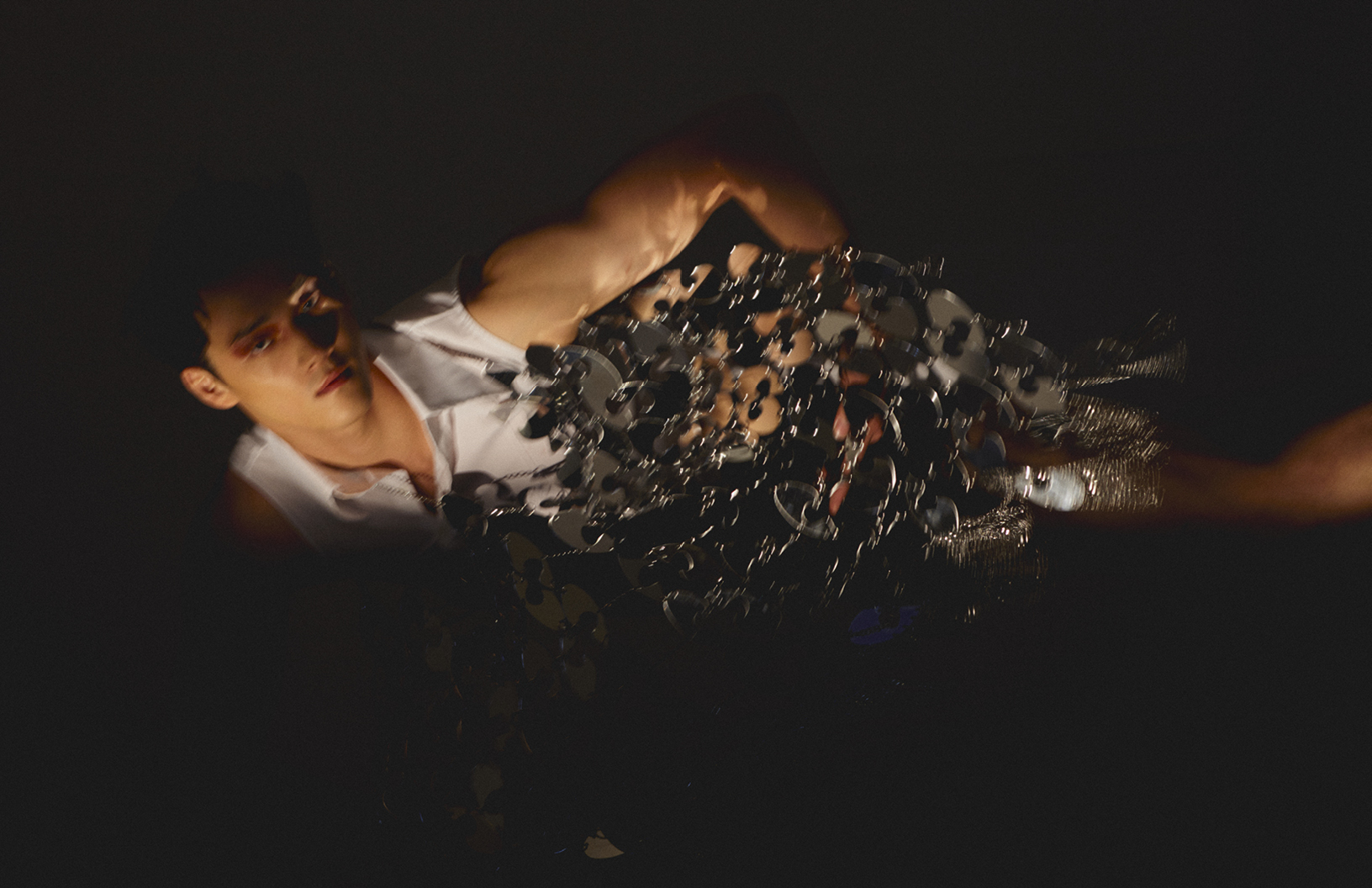 Now you are one of the ballerinos who represent the South Korean ballet scene. How did you start ballet?

I really loved dancing. When I was young, my mother noticed that I would just randomly dance to music, so she guided me towards this path. I started to learn ballet, modern dance, and Korean traditional dance, but it was ballet that mesmerised me the most. That’s when I decided to be a professional ballerino.

You are almost 6′5″. Did you find your tall height to be an obstacle?

Never. It just means that if I dance beautifully, I stand out more to the audience. Of course, you could say the opposite would also hold true. [Laughs] Still, I believe that the level of energy that radiates from my body has a strong presence on stage, so I view it as more of a blessing than a disadvantage.

On the Korea National Ballet’s YouTube channel, there is a short video clip featuring your poetic dance. The clip was titled “Ballet Is Our Language”. In light of your experiences, what do you think is the meaning of the title?

I thought about it once, too. I think the expression accurately encapsulates what ballet is. Ballet is a composite art. There’s an element of visual art in set design, music in orchestra and choreography in ballet dancers. All these artistic elements are harmoniously embodied in ballet. Also, for us, ballet is a language we use to communicate with the audience because we cannot tell a story with words. In that sense, ballet is a universal language. I honestly can’t think of a better way to convey that message than what the title says.

At this point in your career, you have participated in numerous performances. Which works do you feel personally attached to?

I really enjoyed being part of The Taming of the Shrew, Spartacus, and Tchaikovsky: The Mystery of Life and Death. Every time I perform The Taming of the Shrew, I can express different kinds of human emotions, namely the joy and sorrow of life. Also, I get to be cheerful while being on stage. As for Spartacus, I had admired this work ever since I was an aspiring ballerino, so the affection developed really naturally. Last, for Tchaikovsky: The Mystery of Life and Death, I just love the work itself. It really delves into the life and music of Tchaikovsky in a very sophisticated way.

What are some of the works that presented challenges to you as a ballerino?

There definitely are certain performances you feel like you are being constantly challenged at every step of the preparation. There’s one hurdle after another. For me, during Yuri Grigorovich’s Swan Lake, I really had to keep pushing myself to the limits. I played the role of the Prince, and we would joke that the performance should instead be named “Prince’s Lake” because the Prince would show up in so many scenes. It was physically demanding. In addition, what was really daunting for me was the attention I had to pay to every minute detail.

Have you ever felt disappointed at your performances?

No, I have not. To be precise, I tend not to regret my past performances later on because I know for sure I tried my best in every single performance. Feeling disappointed with my best effort would be like putting myself down. Of course, that’s not to say there’s no room for improvement. Rather, if I did my best, there’s little point in dwelling too much on things I could have done slightly better. 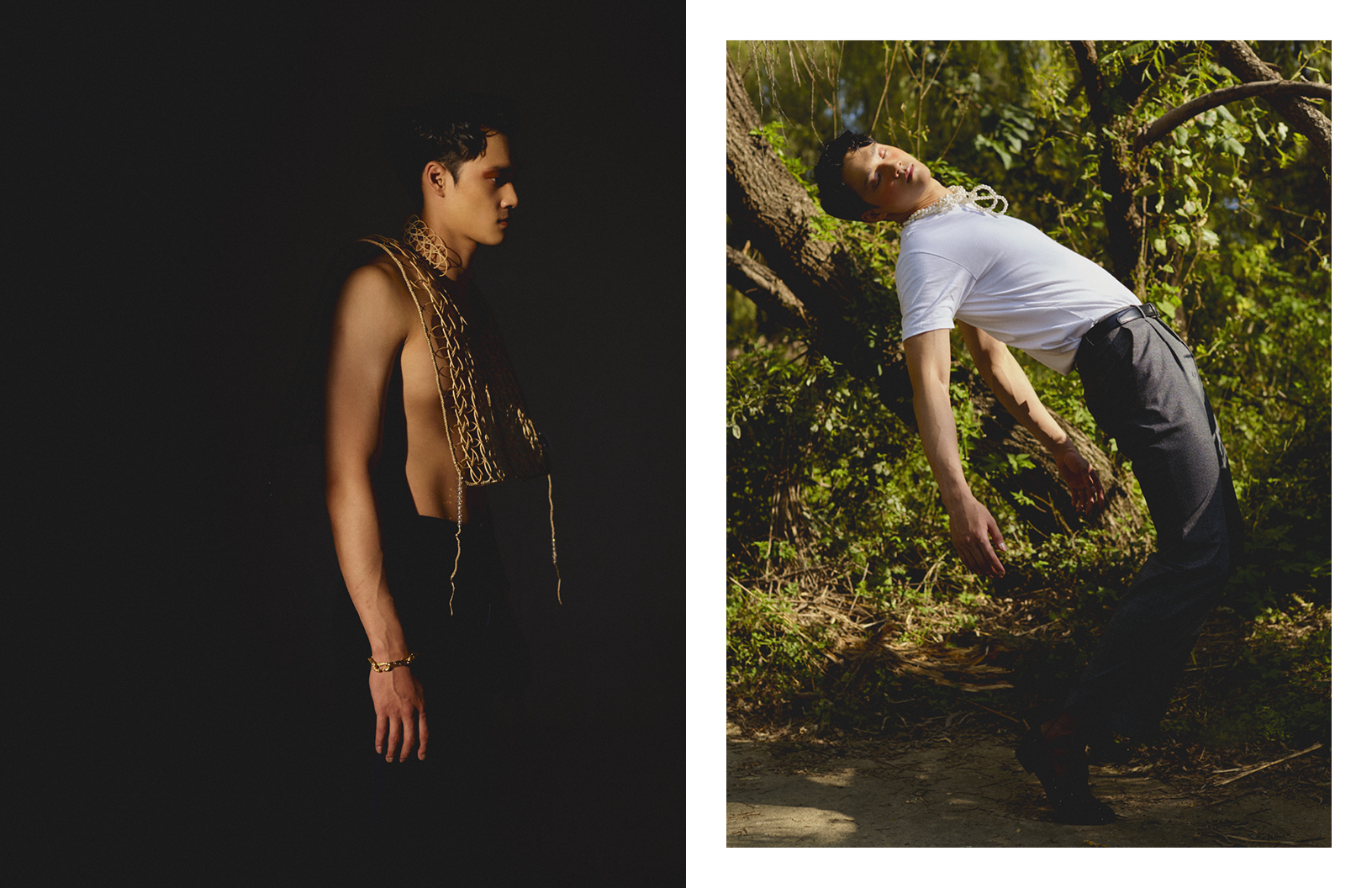 Then when do you feel satisfied about your performances?

When I cannot get out of the emotions of a character that I played. That happened to me while I was performing Spartacus. Even after the performance, I was totally immersed in that role.

Were there times when you felt like giving up? How did you overcome those moments? I heard that you had big injuries several times.

Speaking of injuries, I have had a broken knee. I tore my ACL once, too. In 2015, I was forced to stop performing Giselle because of a ruptured disc. People told me to either take a long break or just keep moving forward. I think the latter worked better for me. Even back in 2015, I returned to the stage after taking a break for only four weeks. I sometimes push myself too hard when it comes to ballet. However, I always try to come up with a detailed plan of how to move forward.

Let’s talk more about ballet itself. Some people find it difficult to enjoy ballet performances, in part because ballet as a genre is not normally perceived as popular art. Do you have any personal recommendations on how to better enjoy a ballet performance?

Some people read the plot beforehand. I personally don’t because I like to play with my imagination throughout the performance. In particular, I enjoy constantly imagining what the next movement would be for the entire duration of the performance. There’s a sense of exhilaration I feel when the play unfolds in the way that I imagined it to be. Also, there’s no right or wrong interpretation in ballet. Each audience is entitled to his or her own imagination and interpretation. As a ballerino, I would recommend the audience to follow the energy that flows from each dancer to better enjoy the performance.

After having been featured in numerous performances in various capacities, is there a dream stage for you? What would that look like?

I’ve seen so many ballet dancers who were forced to suddenly quit because of critical injuries, so I know how difficult it is to give a “final performance”. I really hope I can be on my final stage in the best condition possible enjoy every moment of it. That would be my “dream stage”.

Let’s change gears and talk about South Korea. The world has its eyes on Korea’s vibrant cultural industry ranging from cinema to K-pop. Where do you think Korea is in terms of ballet on the international level?

Compared to the ‘90s, Korea has made huge progress on cultural fronts, and so has Korean ballet. Many South Korean ballet dancers now work with well-known ballet companies and often win international competitions. 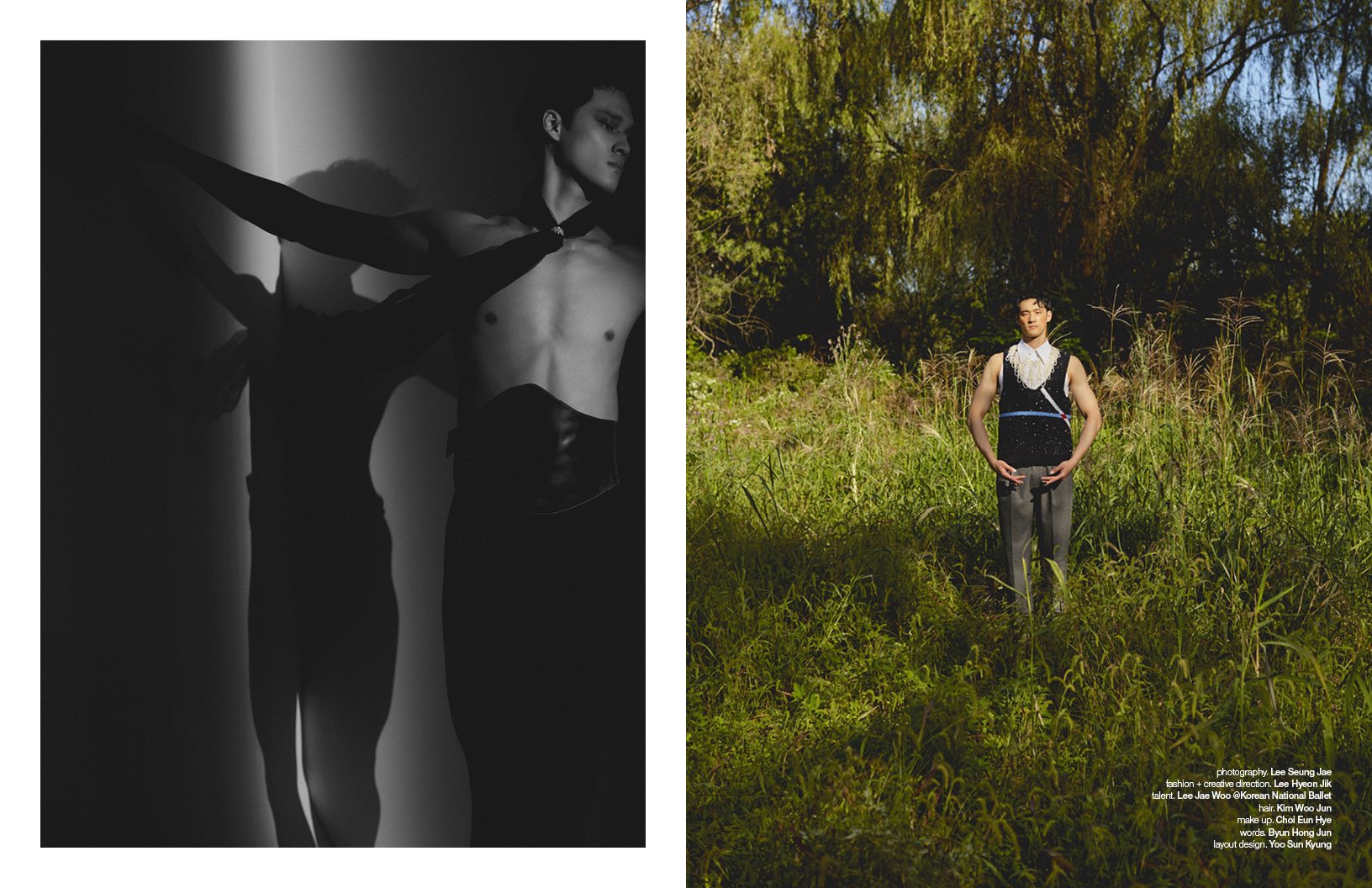 What do you think is the driving force of that international success we now witness?

Koreans are really hard-working and passionate. I believe that the international audience appreciates not only the passion we have as individual dancers but also our ability and willingness to blend in with ballets dancers from all over the world. You just can’t miss that energy that comes out of them altogether.

In what ways do you want to contribute to further that success?

I don’t necessarily see myself as playing a certain role in promoting the South Korean ballet around the globe. South Korean ballet dancers are already receiving a lot of recognition worldwide and will continue to do so. Rather, my true hope is to see all audiences, regardless of nationality, appreciating the beauty of ballet and relishing in the various emotions it gives. If they get to experience that by watching me perform on stage, that, in itself, is meaningful to me.

Finally, any advice to young boys out there who dream of becoming a ballerino just like you?

Keep challenging yourself and pursuing your dreams. Plus, I really want them to be genuine in their approach to ballet. I tend to be really ambitious when it comes to dance — ambitious not in the sense that I’m competitive and I want to reach the top by being the best, but in the sense that I want to perform as many dances as possible. I believe every dance reflects its dancer’s mindset and values because it is such a “human” activity. I’d like to tell aspiring ballerinos that the values that drive them will shape their dances. Be sincere in how you approach ballet. Let your pure passion guides your journey.