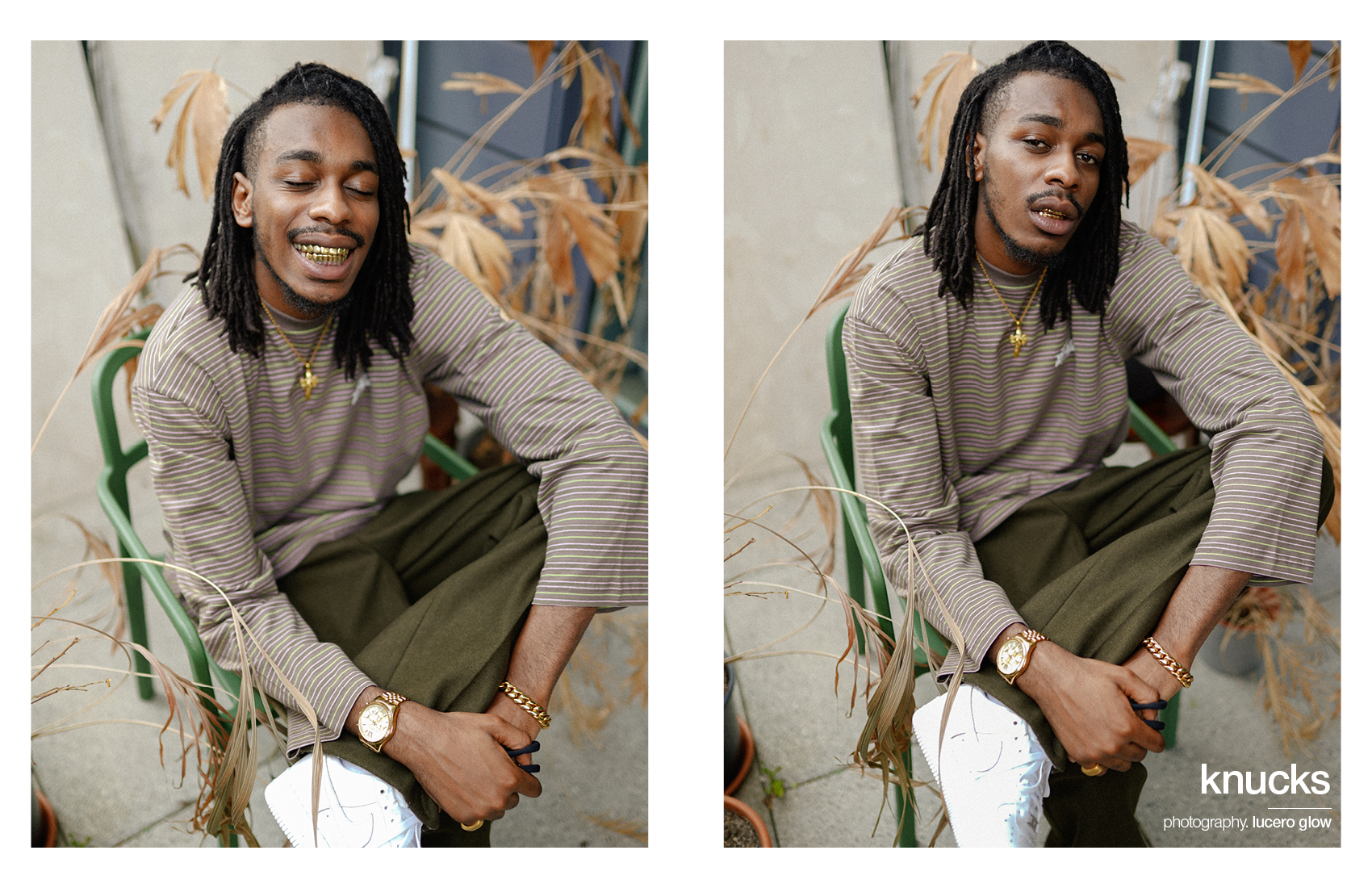 If you’re searching for an authentic snapshot of young London, look no further than rapper KNUCKS. He’s found the sweet spot between authentically reflecting the times while keeping his sound easy-going with catchy hooks and clever wordplay. The 25-year-old North-west Londoner has a chill demeanour, which musically translates into smooth Jazz samples, breezy Trap beats, and his signature saxophone sound. He takes full creative control of his work by producing his own music and building a nostalgic niche for himself in UK Rap.

KNUCKS grew up on Grime but studied the work of Hip Hop legends like MF DOOM and Nas. These early influences shaped his knack for conscious lyricism and observant storytelling. No where does this shine more than in his latest EP, London Class, which was inspired by the Korean drama Itaewon Class. “I saw similarities between me and the protagonist,” shares KNUCKS. In celebration of his highly anticipated new project,  he chats to Schön! about the intrigue of British Hip Hop and what he believes sets his sound apart.

How has your creativity been during quarantine?

Fairly good, got quite a bit of music that I made in this period.

Do you think your background has influenced the kind of music you’re making right now?

Definitely. I always try to put my truest self in my music, so all the things I experienced growing up and where I come from are a big part of what makes my music.

There’s always an old-school vibe to your work. What kind of music did you grow up on?

Growing up I was into a lot of Jazz and Soul music. Sade was my favourite but I also listened to a lot of Anita Baker and Rachelle Ferrell.

You’re known for your clever lyricism and wordplay. What got you to start writing music?

Initially, it was Grime music. I was a fan of the more lyrical MCs like Ghetts, Ice Kid, and Dot Rotten. I got into Rap a bit later and found Nas and MF DOOM. I think most of my lyrical skill came from studying them.

My favourite thing about your music is your captivating storytelling. Where do you draw inspiration when writing and producing a song?

It’s usually a mashup of my own personal experiences, and stories I hear about people from a similar place to where I’m from. I feel that’s what gives the songs that relatability. They come from a real place.

There’s more international attention on British Hip Hop these days. What do you think makes UK rappers stand out?

I think the intrigue comes from it being so different from what others are used to, but at the same time so similar. We all have downtrodden people in our societies but the packaging, [like] our council estates and our accents, is different and new to them.

You’ve created your own niche in the UK scene. What do you think sets you apart from other UK artists right now?

My sound. Because I produce my own music, I’m fortunate enough to craft exactly how I want my music to sound consistently. And because of my love for old school music, it has a nostalgic value to it that stands out from most UK music. 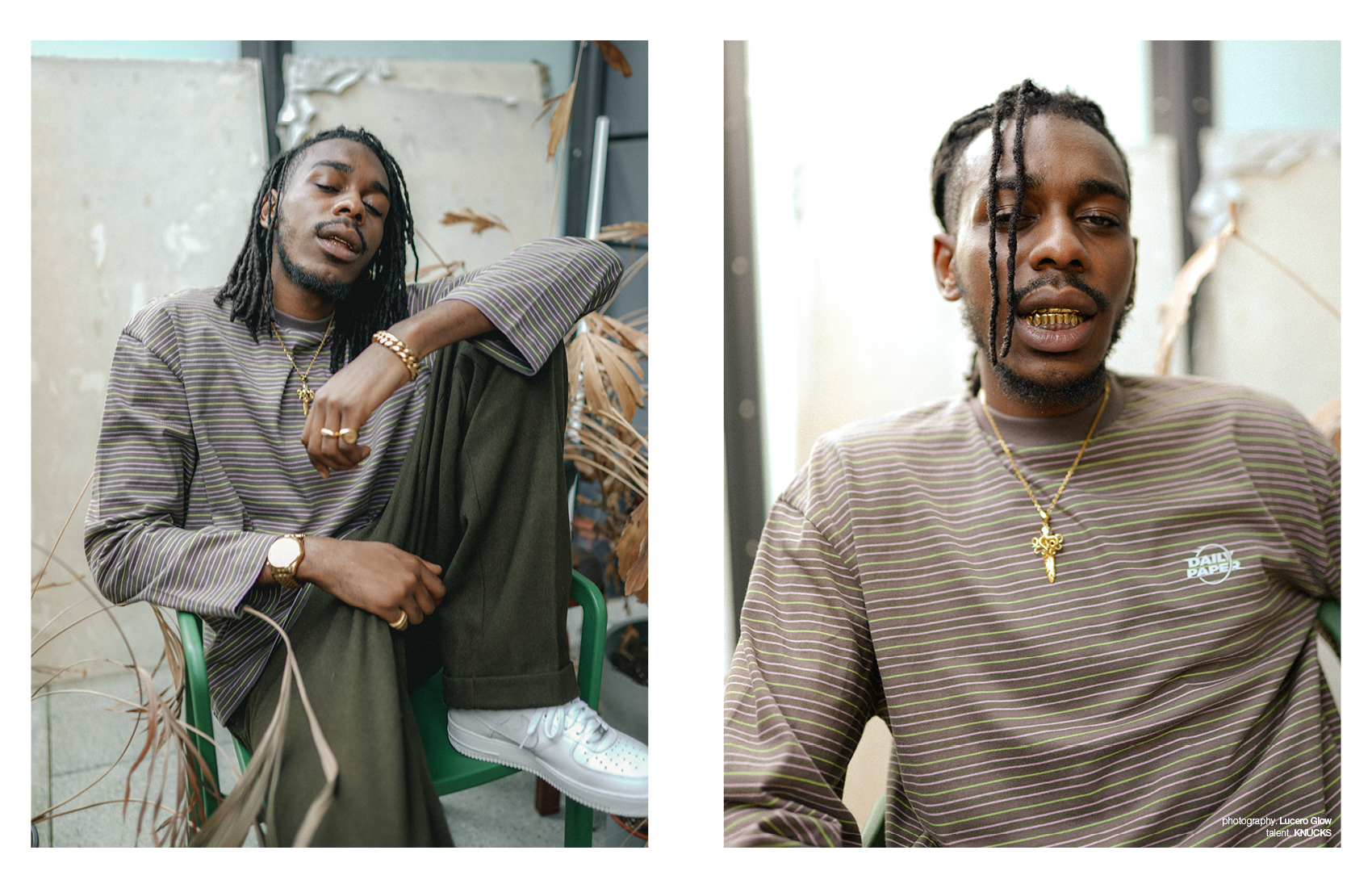 Can you explain the concept behind your new EP London Class?

The EP is based on a Korean series I watched called Itaewon Class. The main character opens a restaurant-cafe called
Dan Bam and has to have a strong sense of integrity and morals to manoeuvre the business. I saw similarities with me and the protagonist, and saw the cafe as a metaphor for my career – I refused to change my music despite it going against what’s popular now. Itaewon was the name of the city the cafe was in, hence London Class.

Why did you choose to explore the theme of class in your EP?

Class is something that affects most problems in society. It’s almost impossible to make commentary on what’s going on today, without addressing how people are seen as so different based on where they’re from.

Is there a song on the project that speaks to you the most?

I think Your Worth because it was literally just me letting off everything that I felt at that time. It was me at my most genuine.

What do you want people to feel after listening to London Class?

I want them to feel a greater respect for the UK and its music, and to see that there are deeper layers to what we go through than what they may see in the mainstream.