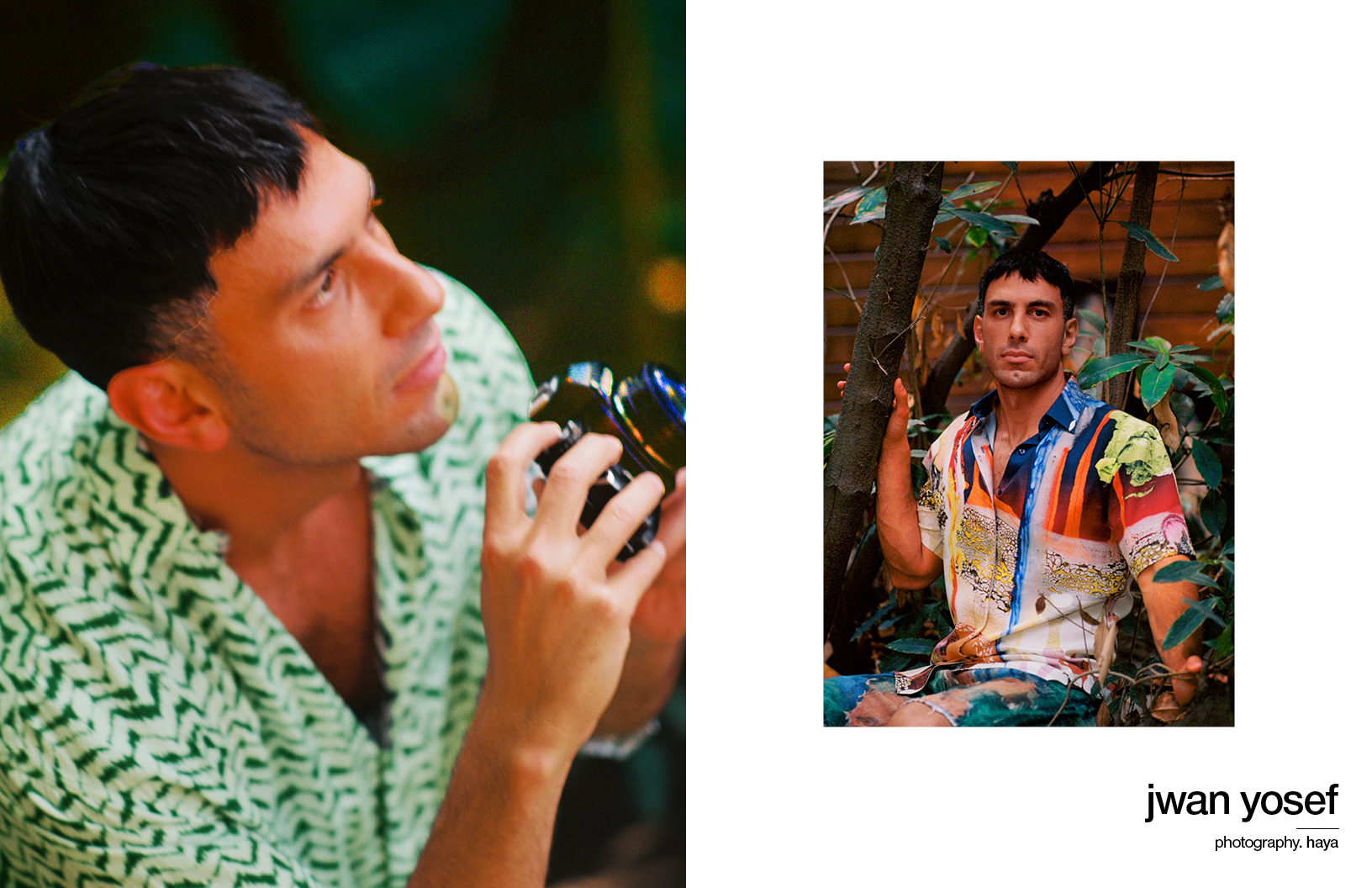 In his latest project, A Study for Touch, Syrian-born, Swedish-patriated visual artist Jwan Yosef reconsiders intimacy. In magnifying small details in his paintings — an earlobe, a row of eyelashes, the curve of a nose — Yosef gently invites viewers into his work. He gives viewers “total control” to project onto his paintings; his work is open to our interpretations, fantasies, and emotions. To him, every small detail presents a narrative.

Yosef a spoke to Schön! about his contribution to the Louis Vuitton 200th birthday celebration, the unimportance of belonging, and his upcoming projects in Stockholm, London, and New York.

Congratulations on your selection as a Vuitton “Visionary” for Louis Vuitton’s 200th birthday celebration! Your latest series, A Study for Touch, is included in the celebration. How does it feel to contribute to such a monumental project?

Thank you! It’s funny you use the word “monumental.” When the creative team at Louis Vuitton first approached me to be one of the visionaries exhibiting in the public-facing windows around the globe, I was so gripped by the project’s scope. Especially after a year of being confined to one place! Deliberating over the scale of the project, I was inspired to present possibilities for a “monumental intimacy.”

A Study for Touch evokes this up-close experience with small details of the paintings magnified to invite you in rather than dominate you as a viewer. I think this huge project with Vuitton was befitting to implement this series with the idea of an obsession to touch — particularly in this time of rethinking our proximities to each other. Louis 200 is really such a stellar celebration of creativity in all of its forms, much like a world’s fair of creatives being displayed simultaneously around the world. 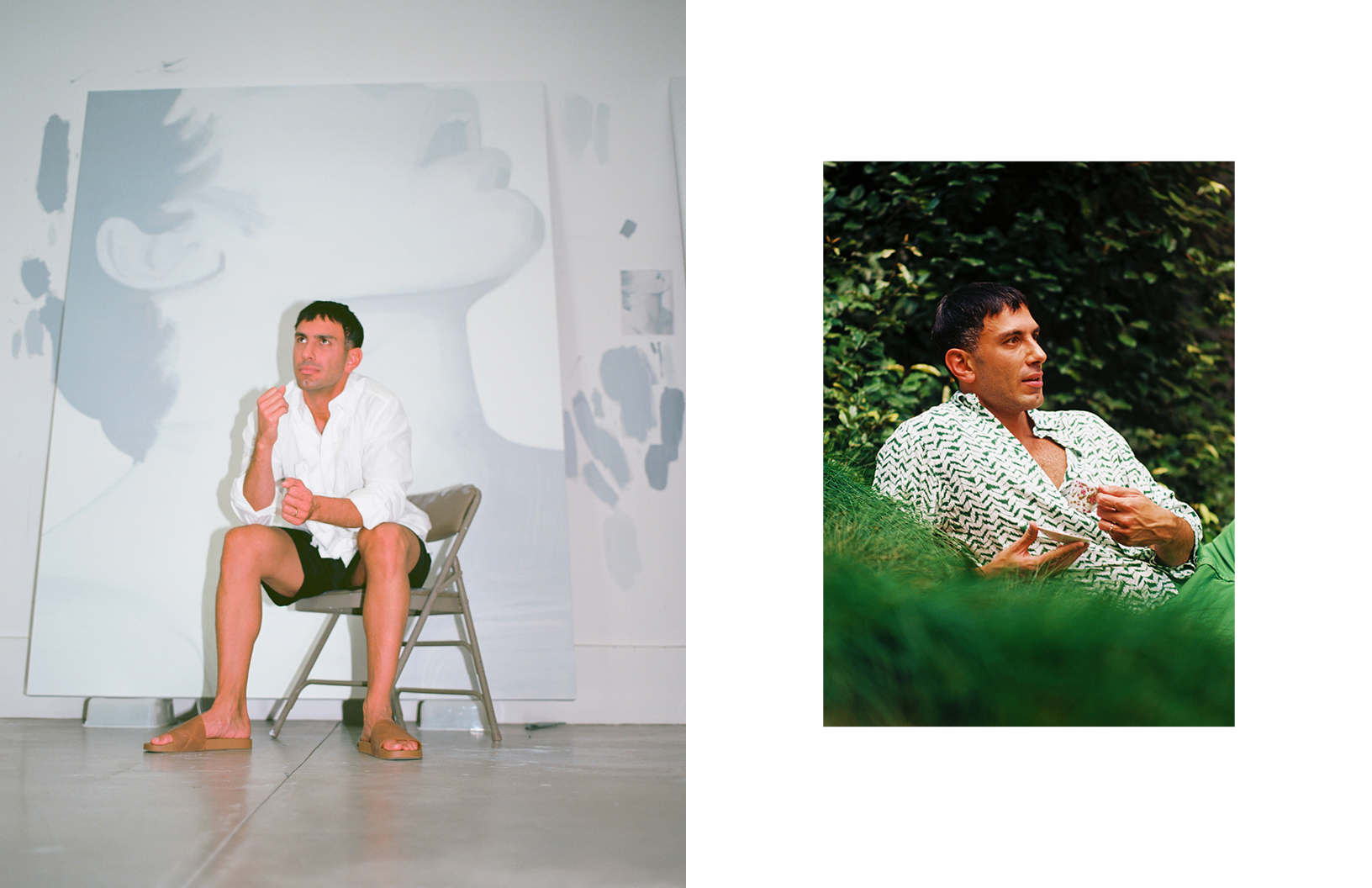 You were born in Syria, raised in Sweden, developed your art career in London, and now live in Los Angeles. Can you tell our readers how your unique worldview informs your art practice and artistic perspective?

I think, if anything, it teaches you the unimportance of attempting to belong. It’s an experience that permeates through my work somehow, after spending years being an immigrant no matter where I have lived. The idea of fitting in is something I evade in my role as an artist as well. My practice hovers between installation, sculpture, painting, and somewhere in between, yet, I’d like to think I am simply a portrait painter. The many facets of my person translate to a constant skipping around of the confines of labels.

You often task viewers with rethinking seemingly unremarkable materials, such as masking tape, in the context of art; you find beauty in the banal. What draws you to subverting expectations?

In effect, nothing is banal. I like the idea of highlighting practical objects in the form of art. The tools employed to create art often become the focal point in my practice. The concept of painting becomes larger than the physical painting itself. It makes up for a much more honest — and fun — experience in creating art. The “masking” tape becomes a beautiful and frail object when it is exposed and accentuated. It is no longer industrial, but it is now a narrative in tension, sensitivity, and provocation — situated to demand a re-thinking of its role, expectations and value.

You also deeply consider the many interpretations, projections, and fantasies that abstract art can elicit. What fascinates and draws you to explore multiple meanings?

Something I absolutely love doing is shedding light on details that might go totally unnoticed, like bringing a background figure out of obscurity to the most prominent foreground. In this series, the portraits I paint are ambiguous figures that are of no significance to the general public, and I completely remove them from the original contexts that would place them in any recognisable scenario. The erasure of their environments not only allows me to create my own narratives but gives viewers total control to superimpose their own emotions and interpretations. It’s a move that also exhibits our own thought processes, recollections and maybe even biases. Almost putting a veil on what is happening to create a moment to be left to the imagination — it becomes very individual and personal. 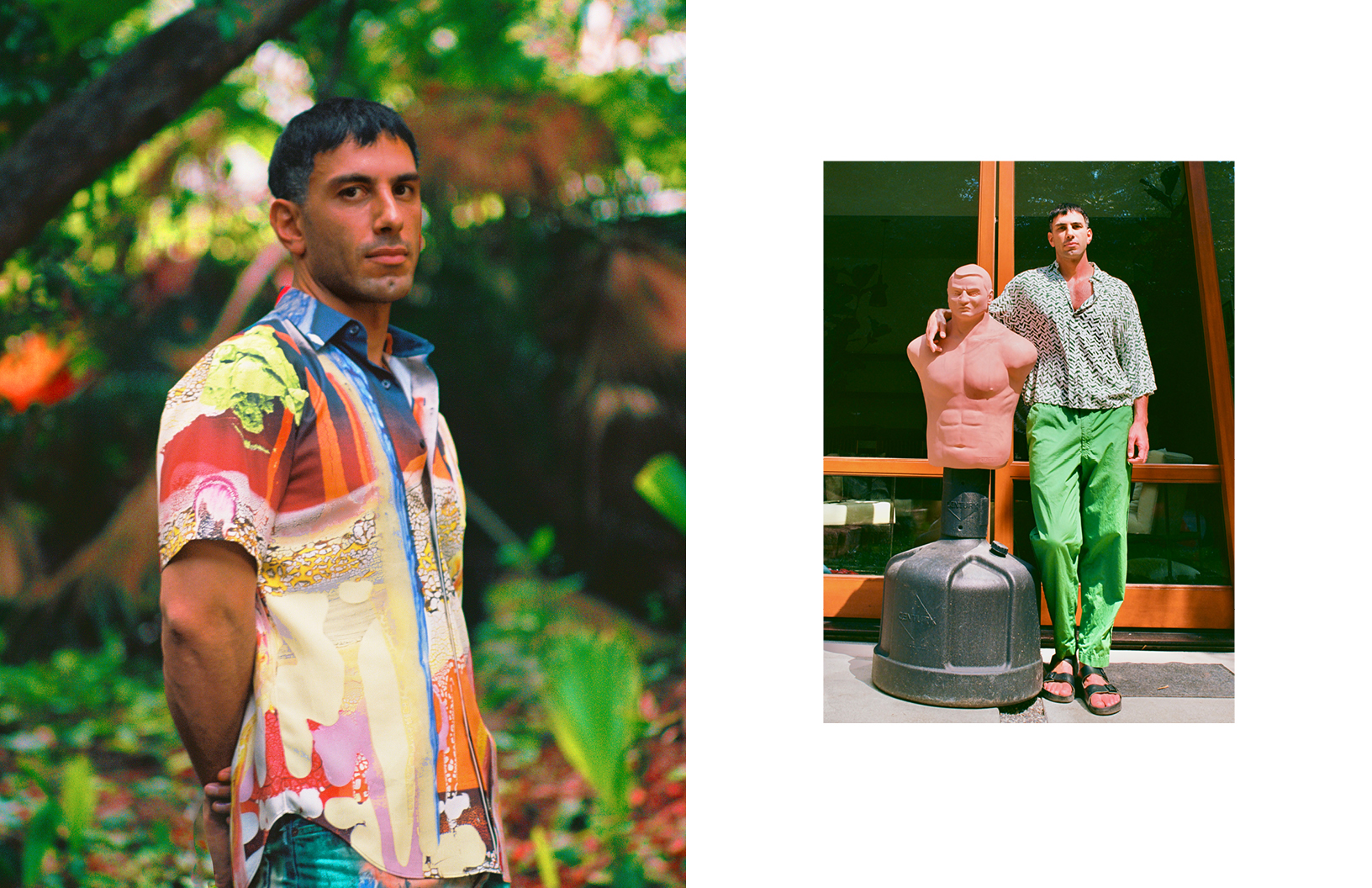 You are among 200 notable creatives and innovators selected by Louis Vuitton for the 200th birthday celebration. Are there any projects you are particularly excited to see in the celebration?

I was particularly thrilled to see my dear friend, choreographer Alexander Ekman included in this initially secret project. I got to discover many of the visionaries the day the project launched and am so impressed and inspired by the many ways creatives in so many varying disciplines push to think outside the box.

A Study for Touch features work displayed in Vuitton windows worldwide and online. What do you enjoy most about viewers reacting to your art?

I am enjoying the element of surprise and unexpectedness of the digital objects on display and the rise of curiosity that occurs when art is situated in unexpected places. In the midst of a busy street, a pedestrian becomes an art observer. It initiates a break from everyday life, offering an opportunity to appreciate art in spaces typically dominated by advertising is an empowering gift to both the viewers and artists. I love that about this project — like a spaceship of creatives landed in the thick of a bustling city.

You’re currently working with Henzel Studios. Tell us about the collaboration.

I have worked with Henzel for a couple of years now. We collaborated to make limited edition art rugs that adapt themes from my artworks. It’s been an intriguing collaboration where I have been given completely free hands to create these meticulously executed, handmade rugs. I am working on a digital exhibition now, where my actual work and these rugs will be displayed together to frame the complete scope of my vision. Here I am again in play with the hierarchies of art! I am excited by the idea of an art object on the wall morphing into a practical interior object for the floor. It arouses so many new contexts and conversations around an object’s purpose. 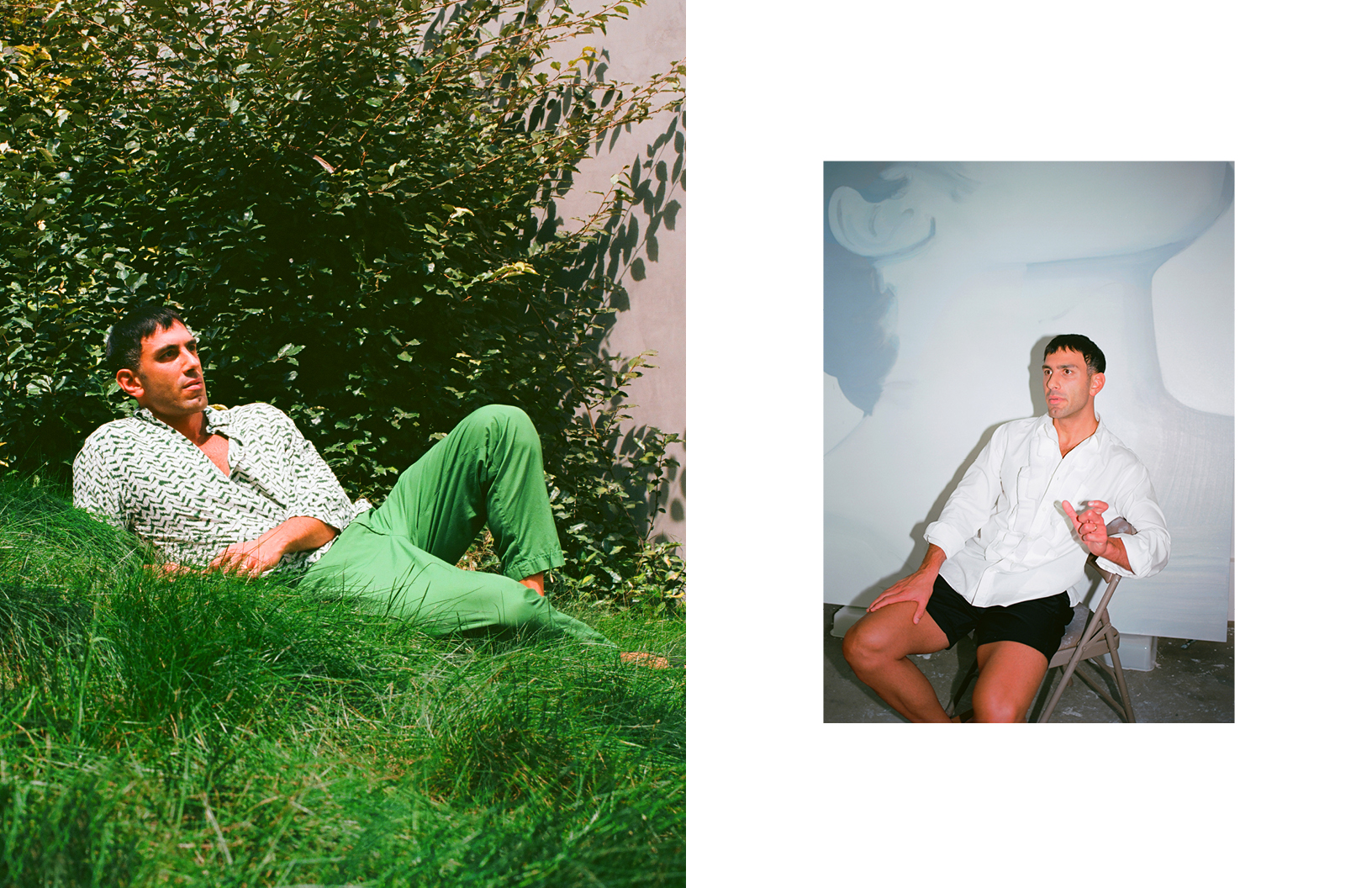 Are there any artists working today who inspire you in particular?

What projects are up next for you?

In addition to the online exhibition with Henzel, I am also working on a two-man show with Niklas Holmgren curated by Power Ekroth in Stockholm called Mothers, which will also be exhibited in Venice next year during the biennale. I’m taking part in a group show at the Islamic and Arab Institute of Art (IAIA) in NY this coming October where we will be focusing on the reinterpretation of the now very common face mask. I’ll also be exhibiting works from A Study for Touch at my gallery, Praz-Delavallade in Paris, this fall. Also coming up, I am continuing my work with The Bomb Factory Art Foundation in Archway, London where I am planning a solo show this coming winter. It’s a busy season ahead and I’m really excited to be able to show and gather again after this past year! 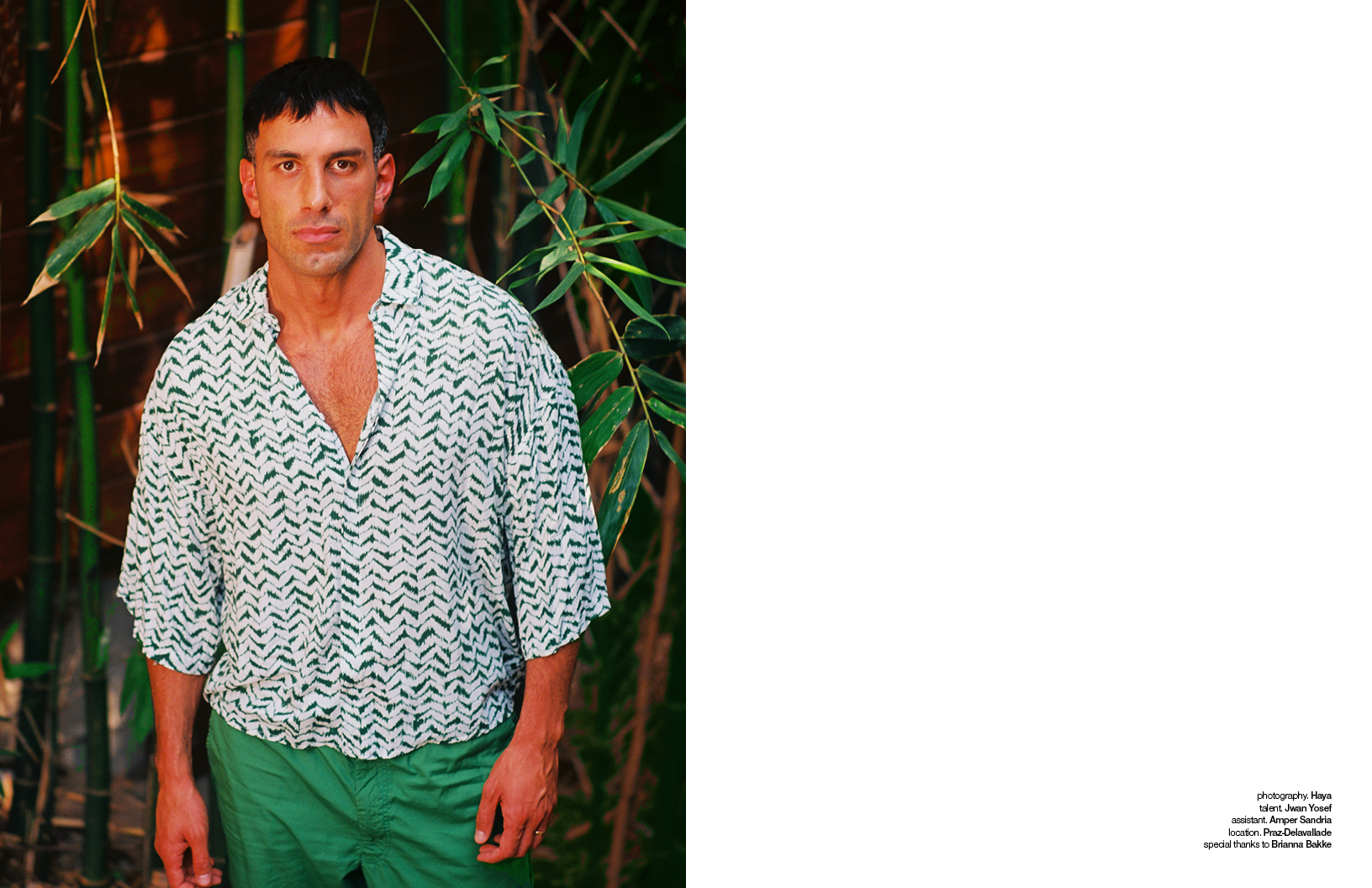