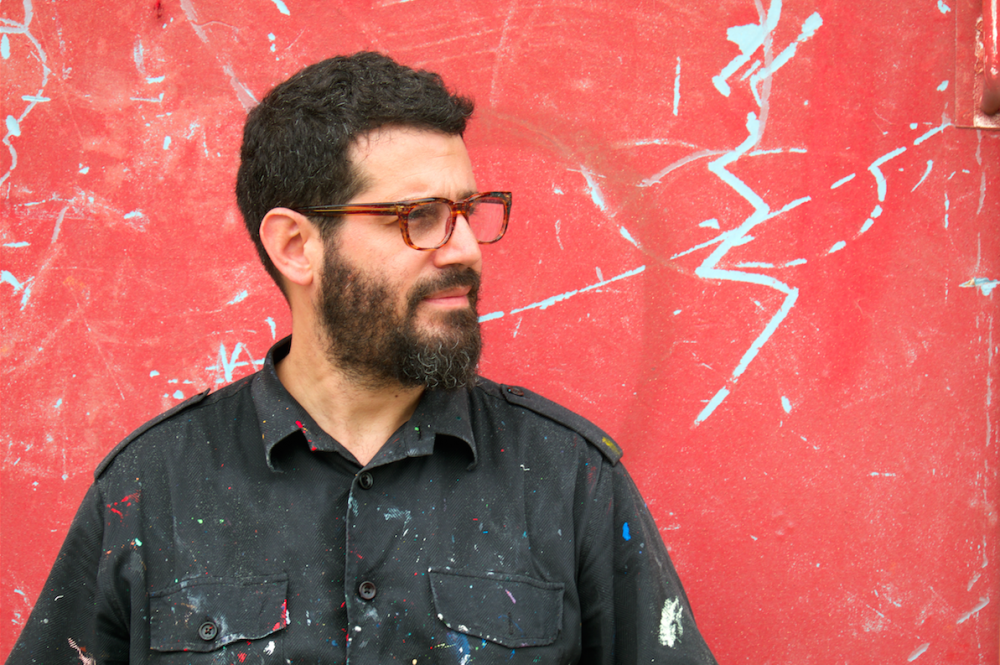 Artist José Parlá has spent most of his life travelling the world and visually documenting his experiences, using cities such as London, Havana and most of all New York as inspiration. In his work, Parlá aims to capture the daily shuffle of life in some of the world’s fastest and most beautiful places, resulting in a textural whirlwind of colour, movement and light. For his latest project with the Standard Plaza in New York City, Parlá creates three-dimensional public sculptures that become a part of the very urban landscape that he loves to depict. Drawing on his heritage, these fragments poignantly bring together political and personal events from his past and present.

Can you tell us about any of the projects you have coming up?

On September 12th I have an opening in two galleries here, one in Mary Boone Gallery and one in Bryce Wolkowitz Gallery, which I’ve been working on for about a year.

So what was it like working with the Standard Plaza, how did this come about?

Working with the Standard was really easy going because everyone there was really nice. They have a lot of good people on their team.

How was this different to other things that you have done?

Well in terms of the process, the main difference was that I was making sculptures that have to last outdoors. The materials were quite new to me so it was very experimental and fun to learn how to use materials that are made to last. The piece is public, which sets it apart from working in galleries and museums. People who wouldn’t normally go to those places will have access to it and be confronted by a piece of art which will likely change their day when they least suspect it. So that’s an interesting point when you are working with public art spaces. 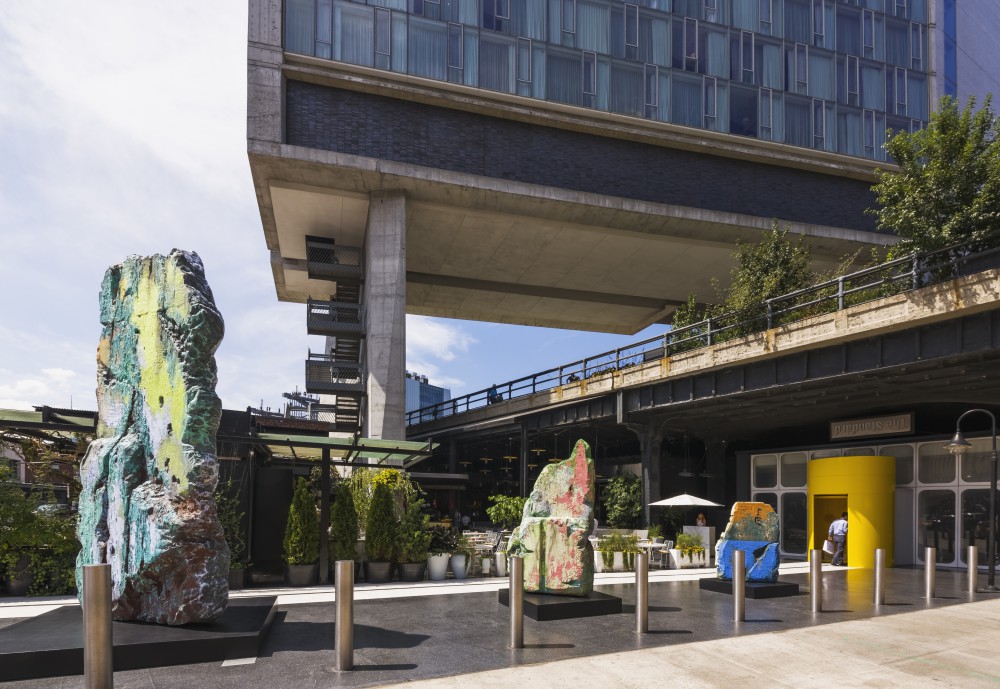 What about public art is important?

Although you might have a show in a gallery or a museum, you’ll still reach out to people who don’t know who you are as an artist. But those people are still interested in art, whereas with public art it reaches out to a bigger range of people because those people are just walking by on their way to work they have no idea that they are going to see art at all. They might be going to the post office or to a school. They might stop and look, and even if they don’t realise who you are as an artist, they are injected with art. That’s why I think it’s really important to have public art.

Do you see your paintings and sculptures as separate entities?

I think its all connected, in my work, a lot of it derives from photography that I take of walls, and I used those photographs for inspiration for colours in my paintings. These pieces of work are what I call sculptural paintings. I’m sculpting all the pieces to resemble broken down walls with different dimensionality to them, but I’m also mixing very thick paint, that resembles a kind of putty, and then I’m sculpting the painting. It’s connected to the psycho-geographical mapping of cities, when you go around and take photos of walls and neighbourhoods. That inspires the painting and the paintings have inspired my sculptures, so it’s all connected

Quite a lot of your work is on a very large scale, what do you like so much about working on a large scale?

I have been known to work larger and what I enjoy about that is your entire body is involved in it. Your gestures and your marks and your compositions can grow into a different dimension than when you are working smaller. The smaller works I look at more as fragments, because you are limited to what you can do with your body. I’m also working on some very small pieces on paper that are more like fragments of a wall or fragments of a large painting. Small pieces are just as important to me and I put as much work and effort into them. 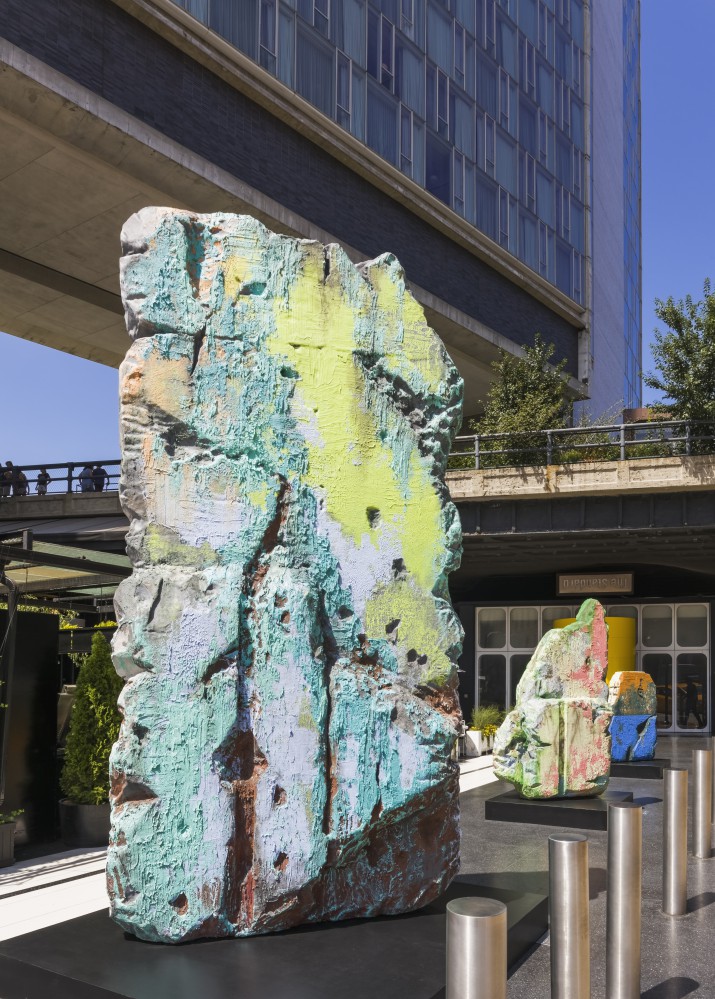 How do you select your colours? Do you plan in advance or try and be spontaneous? Do you think that’s possible?

Since I was very young I’ve been impacted by colour in a special way. I’ve been around paint for so long and I’ve been around the world and what I see is what I’m attracted to. It depends where I am in the world. Everywhere has it’s own colour and range of colours. It’s also about light, the way that the sun looks in New York is different to how the sun may look in Havana Cuba, or London or Tokyo. That is because of the reflection that it’s having on its architecture, whether you are in the North or South. So I’m always paying attention to all those things as I’m inspired by reality and nature. When I’m in the studio its coming out in an automatic process. When I mix it I’m going from my memory of what the colour looked like in that city. I’ve been around colour for so long that I’ve become very accustomed to mixing paint and matching what’s in my head to where I’ve been.

Which cities in the world do you find the most inspiring?

I find inspiration everyday. I’ve been living in New York for years and it still inspires me. I’m always inspired by being in Havana, there’s a light and texture, and layers that appear on city walls. I have spent a lot of time in London and I have done a lot of projects there. Hong Kong, Tokyo, Puerto Rico, I’m the kind of person who finds inspiration everywhere that I go. As I travel I’m inspired to make work from my life experience. 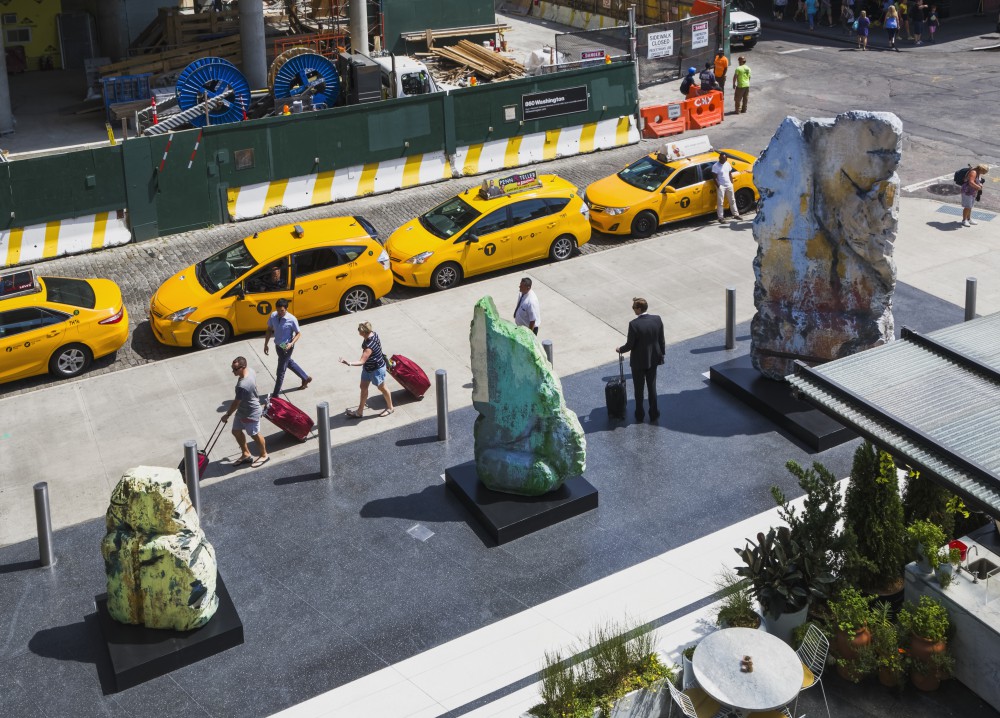 Would you say that your work is politically motivated in general?

Everything we do is political. All of us live in a political world. We no longer live in a natural world, and everything is full of division. There’s borders and laws. By its pure meaning, art is political, because we are creating work that is dealing with the world today.

My work at the Standard Plaza doesn’t carry a political message as much as a political feeling. The reason why I wanted to make these fragments is because this year is the 25th anniversary of the falling of the Berlin wall, and that has been a symbol of the end of the cold war. Being of Cuban descent, people in Cuba felt that things were going to change in Cuba, and 25 years later, President Barack Obama has started the conversation in setting a new path in communications between the governments of Cuba and the United States.  In a sense these walls are representative of that, and also representative of a biographical study of my own life. One wall is Miami Florida, where I was born. One is San Juan Puerto Rico where I grew up, and the other one is Havana Cuba, which is the connection to my roots and a place that I’ve gone to often to do projects.

If you could pass on any advice to yourself 20 years ago, or to emerging artists and creatives these days what would it be?

The old English saying, ‘Keep Calm and Carry On’

For more information about the Standard Plaza click here