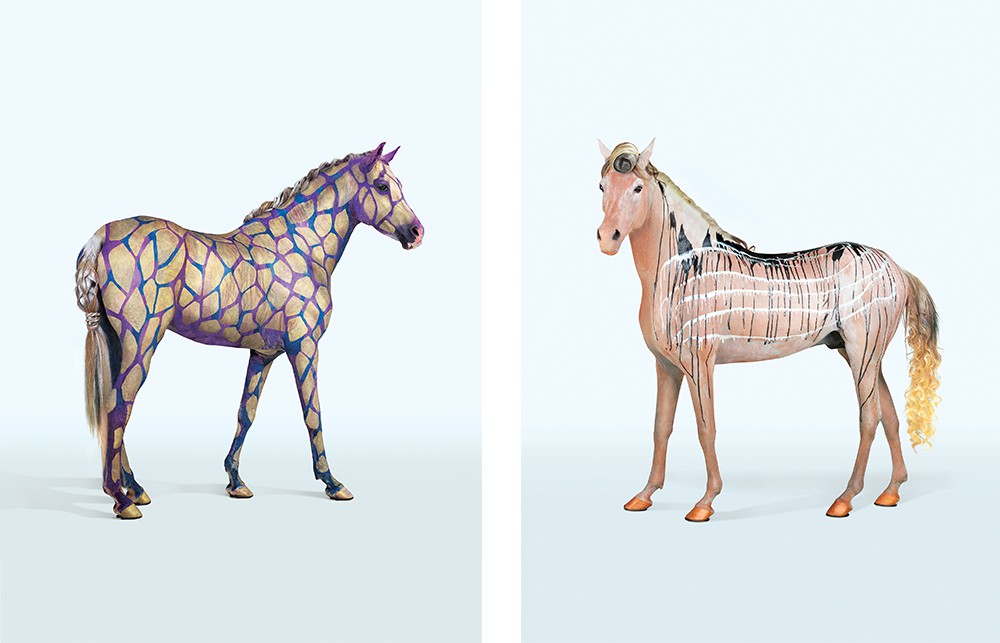 In the midst of an illustrious fashion career with a throng of celebrity supporters including, Pink, Shakira, Nelly Furtado, and Naomi Campbell, Johny Dar turned his back on his job in fashion to take a 5 year hiatus. During this time he travelled the world and sought to discover more about different cultures and traditions. What emerged, as a result of his journey, was a desire to explore and create a new form of artistic expression through art, fashion, multimedia practices and body art. Drawing inspiration from the female form, Dar’s body art is an exploration of the symbiotic relationship between his own creativity and the personality of the individual who would become the canvas for his artistic expression. Dar’s latest work Horse Whispers brings body art to an Arabian stallion, ‘Bader’, who was painted and photographed in 12 different looks. The collection is an exploration of the unique bond shared between man and horse and a celebration of the majesty and beauty of the horse, a creature for which Dar harboured a childhood fascination. Schön! caught up with Johny Dar to talk about his latest projects and plans for the future.

Do you think your initial training in fashion has influenced the direction of your artwork?

Definitely.  It was the start of my career and it influenced the rest of my artistic expressions.  Fashion design is the heart of my artistic direction and my brand because my work has been primarily about developing my understanding of the human body, and how I can apply my expression onto it in order to dress it.  Everything I do and every series I design works within these principles.  So I’m very influenced by my roots in fashion.

After taking a 5 year hiatus to travel, is there a particular memory that inspired you to explore an art as a medium?

My five year journey was a quest to develop my artistic expression.  That was the reason I took a break from my early career in fashion – to develop my artistic style and create a look inspired by my art that could be a medium of communicating to a global market.  There were many moments during my travels that inspired many dreams, and which more and more led me to realise that the main inspiration behind all of my creations is my art.

Was it difficult to return after such an experience?

Very difficult, because I let go of all my expectations and the pressure of meeting the expectations of an audience and the market, and found freedom in exploring different fashionable expressions around the world.  So it was challenging to return to the industry because especially in fashion there is a lot of pressure to meet deadlines and the demands of the market, which can be constricting when deciding which artistic form to express.  Meeting the demands of the industry can be very stressful, with a lot of pressure to top your last collection and maintain a close understanding and relationship to the needs of your customers. 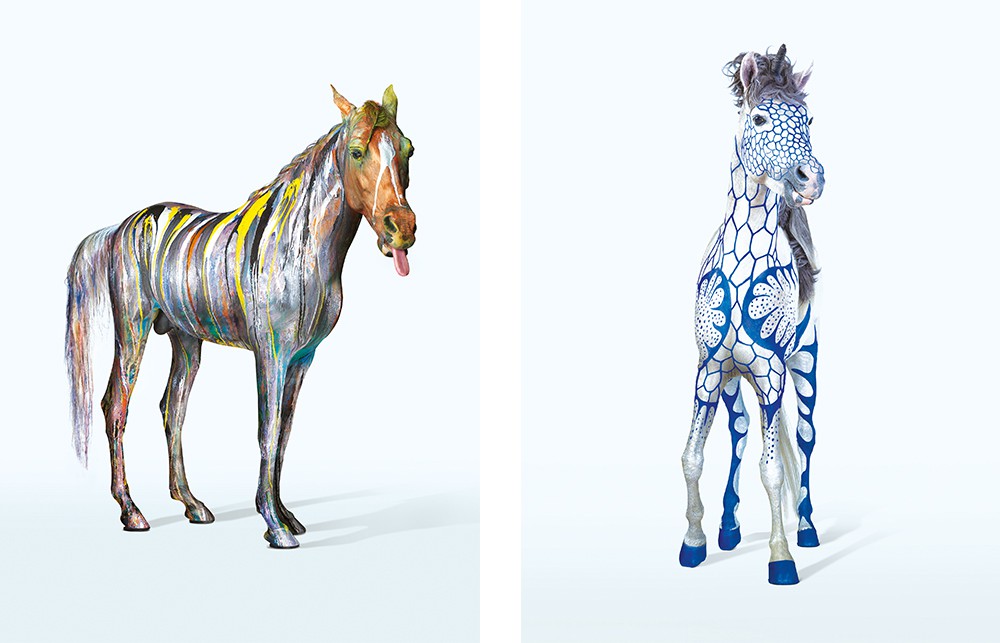 You’ve described DAR as an acronym for Design Art Reborn, what are you trying to express through this?

I believe we have created a gap between us and the evolution of technology, and it’s time for us to view design from a new perspective, as a medium that can allow our bodies and the human experience to evolve to the next stage.  I believe it is time to create a new paradigm of possibilities in which we can apply the principles of technology onto our bodies by creating an intelligent design that allows us to enhance our ability to process information like our smart phones can, and speed up our performance like our cars.  I believe there is a serious need for us to rebirth the possibilities of our bodies by discovering new design principles that allow us to excel the performance of technology.

What elements do you have to consider when starting a piece of body art?

What is it about the female body that inspires you?

It’s not my body therefore it is easier for me to relate to than my actual body because I have less judgement towards it.  I’m less constricted by it because within the female body there is an ocean of emotion wanting to be expressed, and I enjoy engaging these emotions and forming them into a design that carries the emotions within it.  I believe women in general are more expressive with their bodies than men, therefore I find greater freedom in exploring the female body.  Women are also usually more willing to let their emotions be carried out through their body expression and body language. 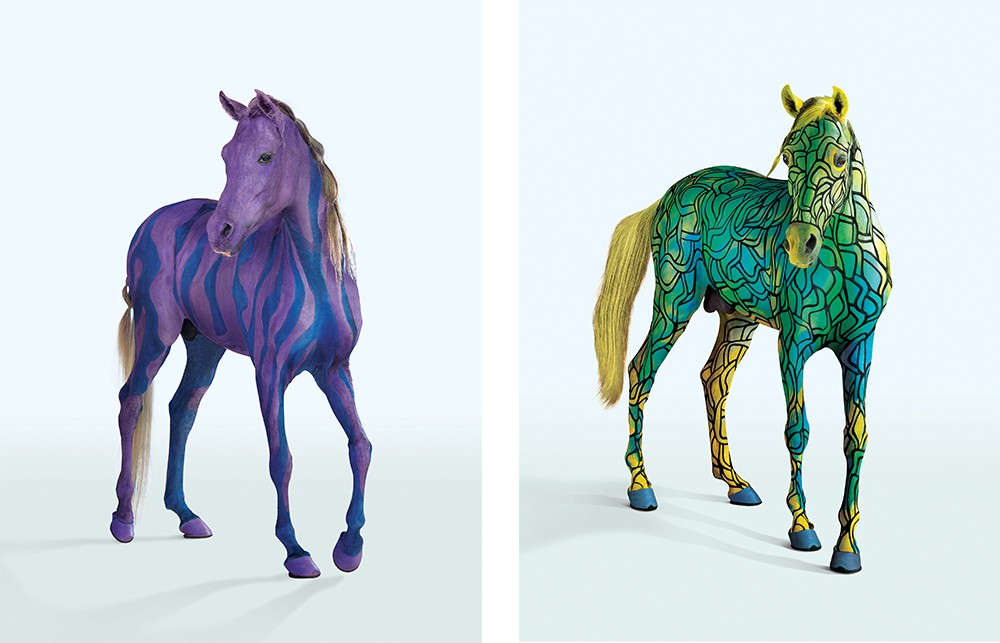 Which of your pieces so far has challenged you the most?

The Queen of Pearls.  I really didn’t want to skip a beat or leave a gap within my creation of her, and she took 300 hours and about 2 months of designing.

Horse Whispers has been described as a fusion of art and nature, can you describe the experience you had with Bader the horse?

It was a life changing experience.  I was definitely challenged by the people that I expressed the idea to who were skeptical about the project and believed it would be impossible.  And I was challenged by the nature of the horse that doesn’t necessarily obey the laws of humans, therefore was hard to control in many ways.  It was hard to figure out the most appropriate way to create the design and work around all the physical challenges like the twitching of the horse’s skin whenever the brush touched it, because it reacts to it as if it’s a fly.  Establishing the trust between me and the horse was very important, so the horse would allow me to paint his face and sensitive areas, which I was told would be impossible prior to entering the experience.

How long did Horse Whispers take you?

Over a week, and 12 to 14 hours a day.  All together more than 2 weeks, because it took some time to establish a relationship with the horse prior to starting the work.  And then a little over a week to finish the looks.

Do you think you can push body painting further?

Yes.  That’s just the nature of the beast.  For my next project, if all goes well, I will be painting elephants.

How would you describe your genre of art?

Like a child that never wanted to grow up, and never wanted to stop at any limitation to realise a new form of expression, constantly inspiring myself and my audience to push themselves and their possibilities further than what is believed to be possible.

What is your ultimate ambition?

To create clothing that replaces technology.

I’ve read that you have always had an interest in filmmaking, is this something you plan to incorporate into your future work?

As a matter of fact I am already casting for my first feature film, which I am planning to start shooting in the near future.  Then there is the DAR the BOOK movie series, which is meant to be a trilogy that makes Star Wars seem like a little episode within it.  The idea is that you will be able to glimpse every science fiction fantasy film ever produced within a further exploration of the human imagination that inspires a new generation of human possibilities.

What can we expect from you next?

I’m in the process of finishing my first album – the first song, I’m Grey, is already out and the second song is due to be released before the end of June.