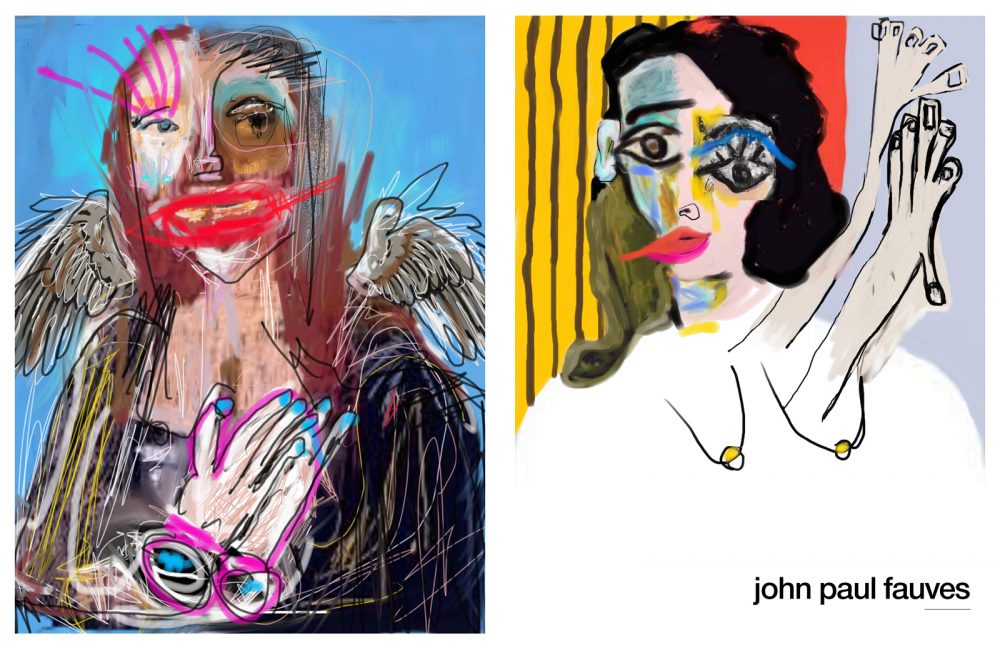 Nothing escapes John Paul Fauves’ scope. From Trump to Disney, this Costa Rican contemporary artist takes pop culture critiques to new levels with his “disorienting” collaging techniques. Full of colour and commentary, Fauves’ work questions our attachment to social media and takes shots at mainstream culture. Taking his name from the Fauvist art movement, his pieces have been exhibited in cities like New York, LA, Miami and Madrid — among many others. His solo exhibitions, A Loss of Innocence and The Mickey Me Collection, are a clear example of Fauves’ pervasively poignant style. Schön! caught up with the masked-artist to talk about his upcoming exhibition at Scope, his Costa Rican roots and pop-expressionism.

You live and work in San José. Does living in Costa Rica affect your craft in any way?

I’m very comfortable in my studio and home. The city can absorb you if you let it. Also, nature, in particular the beach, plays an important factor in my life. However, I feel that there is not as much opportunity to emerge as an artist in this country. So, before social media became such a game changer for artists, I had to work in a different field. But, in this day and age, the world has become pretty flat (not conspiracy-wise) in globalizing every country.  The internet has connected humanity so now it’s easier to be further away from big cities and still be aware of what is going on in the world. 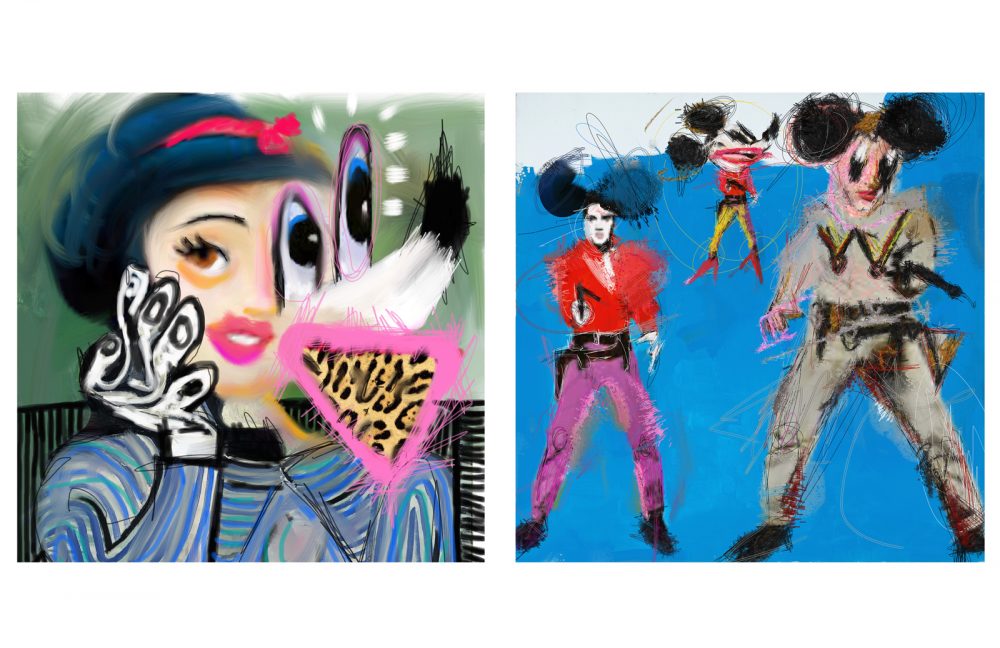 Most “contemporary artists” cave to societal pressure and resort to the city living. Being born in Costa Rica, why have you decided to stay?

Actually, I used to live in Madrid and had lots of fun back in the day… maybe a bit too much fun. So I definitely don’t need big cities anymore. I think they live inside of me. Luckily, as an artist, I have been given many opportunities to exhibit my work on an international level. This has presented me with an amazing “excuse” to travel. As a matter of fact, I just got back from my latest trip to LA. I worked in this spectacular pop up event alongside some distinguished international artists at La Peer Hotel in West Hollywood. My frequent travel to big cities gives me enough of a dose of the city life. I wouldn’t trade the cosmos of Costa Rica, my life at my studio and the fact that I can stay close to my 3-year-old son, for anything. 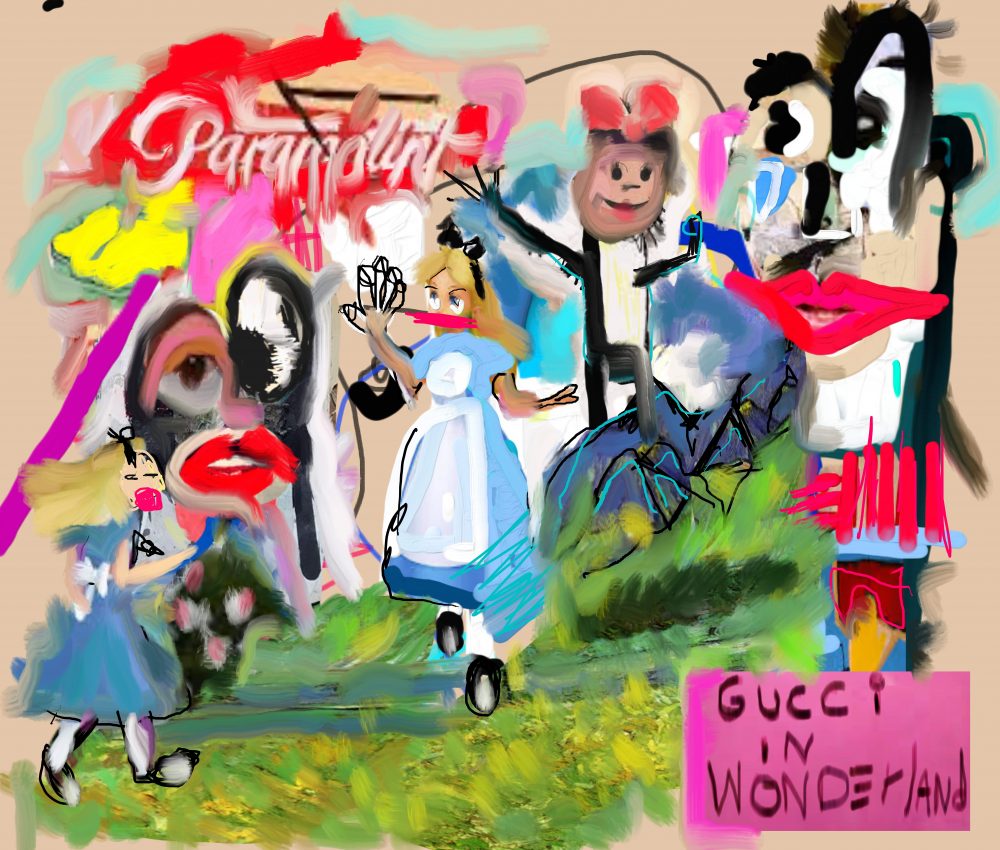 At that time, I thought that the right way to be an artist was to die like one and I was very close to death several times due to my substance abuse. I had a lot of resentment and hadn’t found my place in life. I always loved to paint, but at that point, I didn’t have the confidence to pursue a career in art properly. Environmental factors also played a major factor in my scepticism, I never had a support system. Also, people here made me believe I was not good enough to succeed in art. So, I found art and the hedonist lifestyle a perfect escape from my “nine to five” job. I felt like a superhero or an actor living a double life. During the day I wore the normal office mask and then at night, the wild beast would come out with paint and drugs and crazy adventures that I don’t think I can write down here… 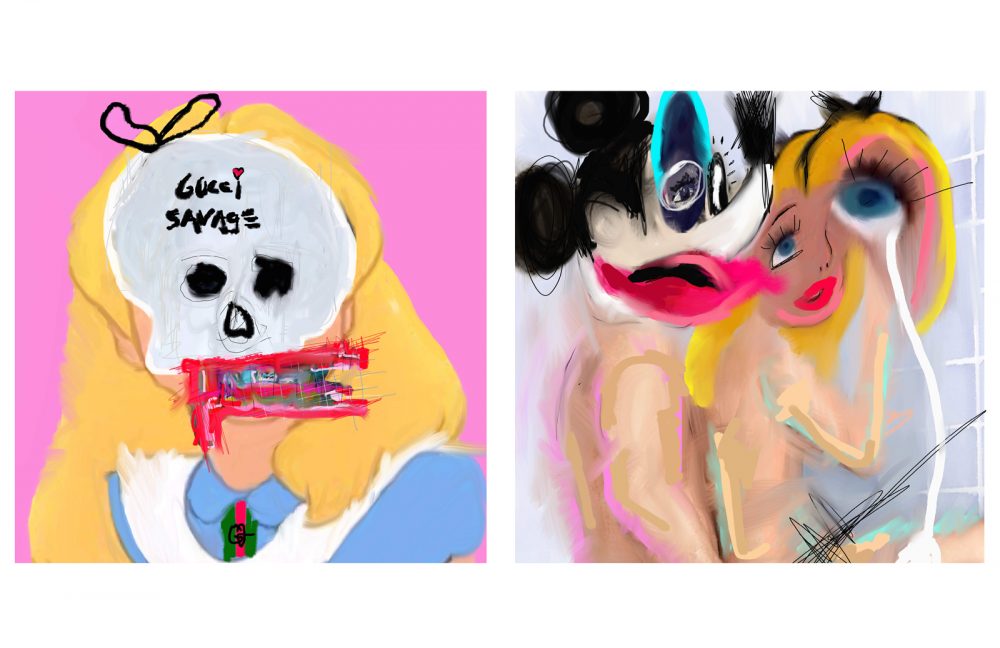 Fauvism inspires your art greatly, as seen in the vivid colours and lack of classical order. What precise aspects of this movement attracted you so much that you even named your art persona after it?

Several aspects actually: starting with the wild beast meaning behind it since it was all that represented my life. And in certain aspects, it was the only thing that could tame the beast. Art actually saved my life. I was also inspired by the use of colours and the technique of painting directly from the tube. I always did that as a young child and can still remember my art teacher complaining that I wasn’t mixing the colours on the pallet properly. Plus there is the fact that this movement went against the odds and the tradition and became transgressive for their time, something I’m very passionate about today. 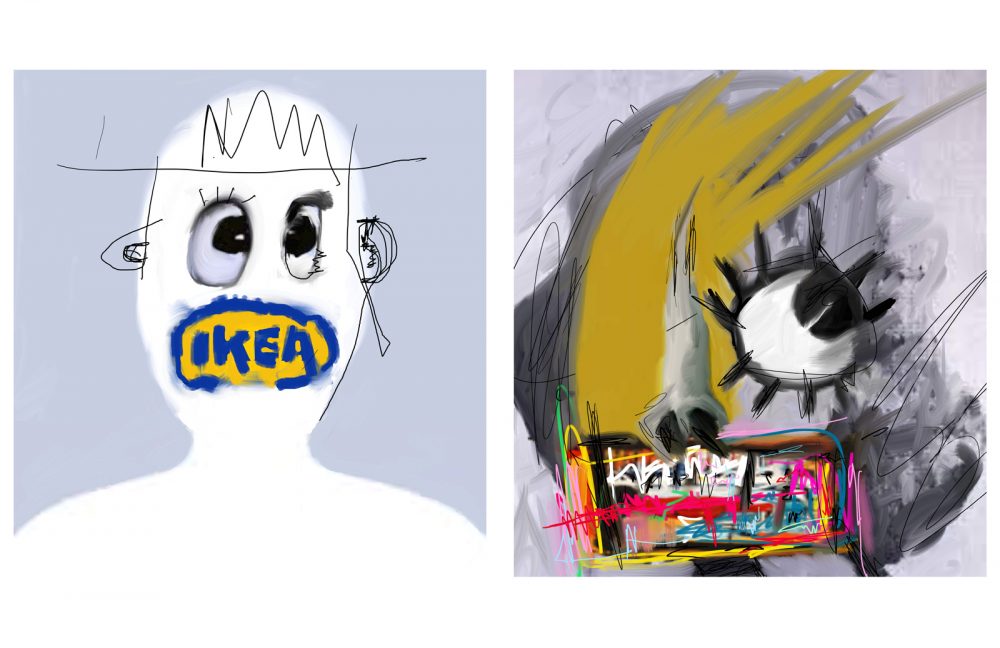 Do you feel like John Paul Fauves is a Warholian-like art persona or is it purely yourself?

Definitely Warholian, Basqiolian, Picassolian, Liveolian, Mickeyolian,  Godolian… [laughs] and the list goes on. I’m the product of my life experiences, influences and of the people and actions that have inspired me.

Some people describe your work as neo pop-expressionism. Would you agree? How do you describe it?

I do like that term and think it’s well related. However, if I had the option, I would like to describe it as “transgressive art”, since that is what inspires me the most. I’m in constant search of uniqueness and originality. 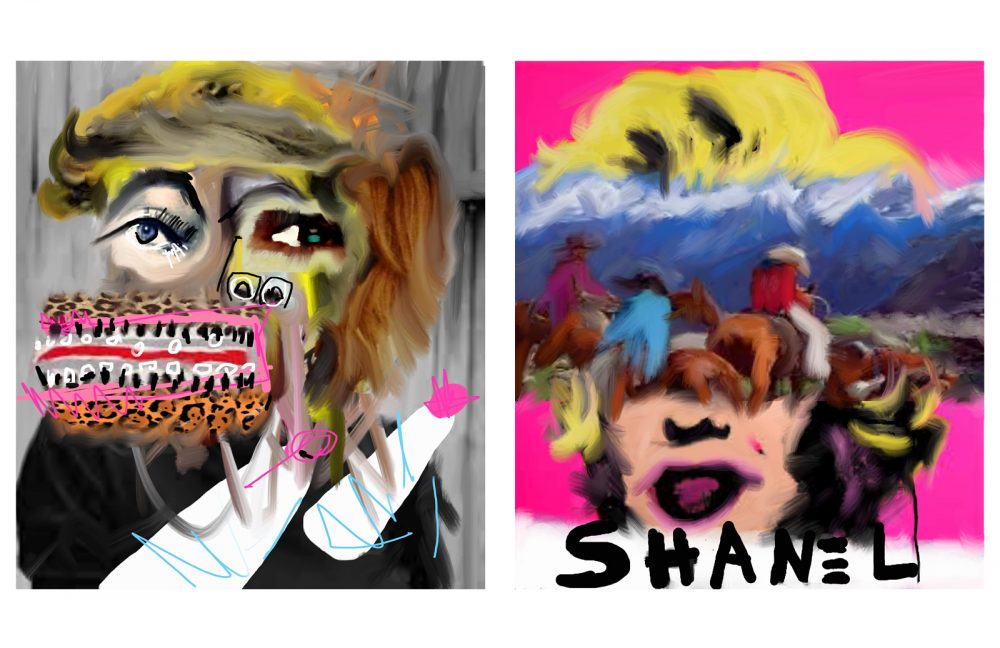 Your work questions identity and our infatuation as a society with mainstream culture and social media. Is there a specific reaction you hope to cause with your paintings?

Yes, that specific reaction is to break the illusion of self and the idea that the world rotates around us. There is so much noise and propaganda that people want to solely build and consume in an external need for satisfaction. We are looking the wrong way. It’s actually in silence and in an inward journey where we find peace and true happiness.

Are you still working on your series No Profile Picture? What inspired you to start it?

I’m working on it in parallel to Micasso, which is part of the Mickey series. The main inspiration is very similar in all my collections. As I mentioned before, it is about the detachment of ego. As we grow, we are bombarded by information and experiences that mould our personality, but sometimes [they] also make us forget who we are and why we are here, on this planet. My No Profile Picture series is based on the icon “no display picture” you find in WhatsApp, Facebook and Instagram. It is the global icon representing “no image”. In a certain way, this icon makes your social media seem uncool or scary. Posting selfies and photos of trips and achievements are the norm we have grown accustomed to. I’m trying to give this no profile concept a place in the established phenomenon that represents your true self, or your soul, to put in other words. In other words, we are not how we think we are, we are much more than a name, a career, a parent or property owner. We are spiritual beings having a human experience. 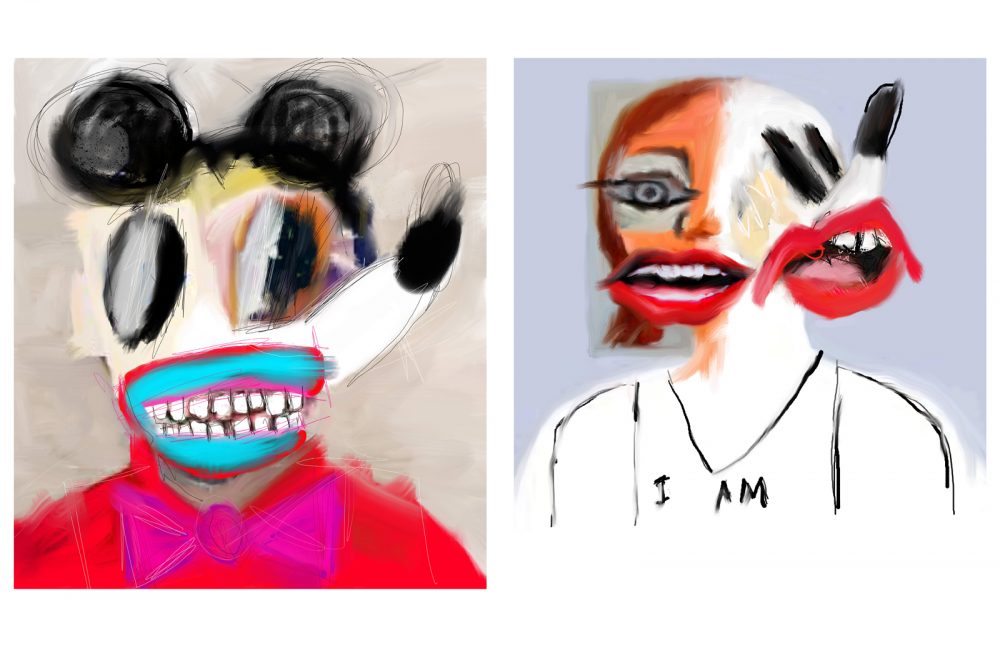 Your art is a take on capitalism and the self-inflicted pains and pleasures our society goes through via external distractions and social media, specifically. Knowing you have to promote yourself via the mediums you critique, how do you escape falling into hypocrisy?

Well, there is no better seller than the one that knows his product. I represent all this hedonism. I’m proud and embrace my past because it helped me to wake up my own personal fight of the bondage of self.

Now, regarding promoting myself through social media, I don’t see it that way. I use it as a platform for expression to the outside world; not as an egocentric need. It can be tricky and addictive so it’s a daily effort not to fall into the narcissism of ego-boosting traps. I’m not critiquing the platform as I am no stranger to it, I’m just pointing out that there is another way to use it rather than what we are customary to. In general, criticizing is not a word I feel comfortable with since everybody has their own level of understanding in life and I do respect that. 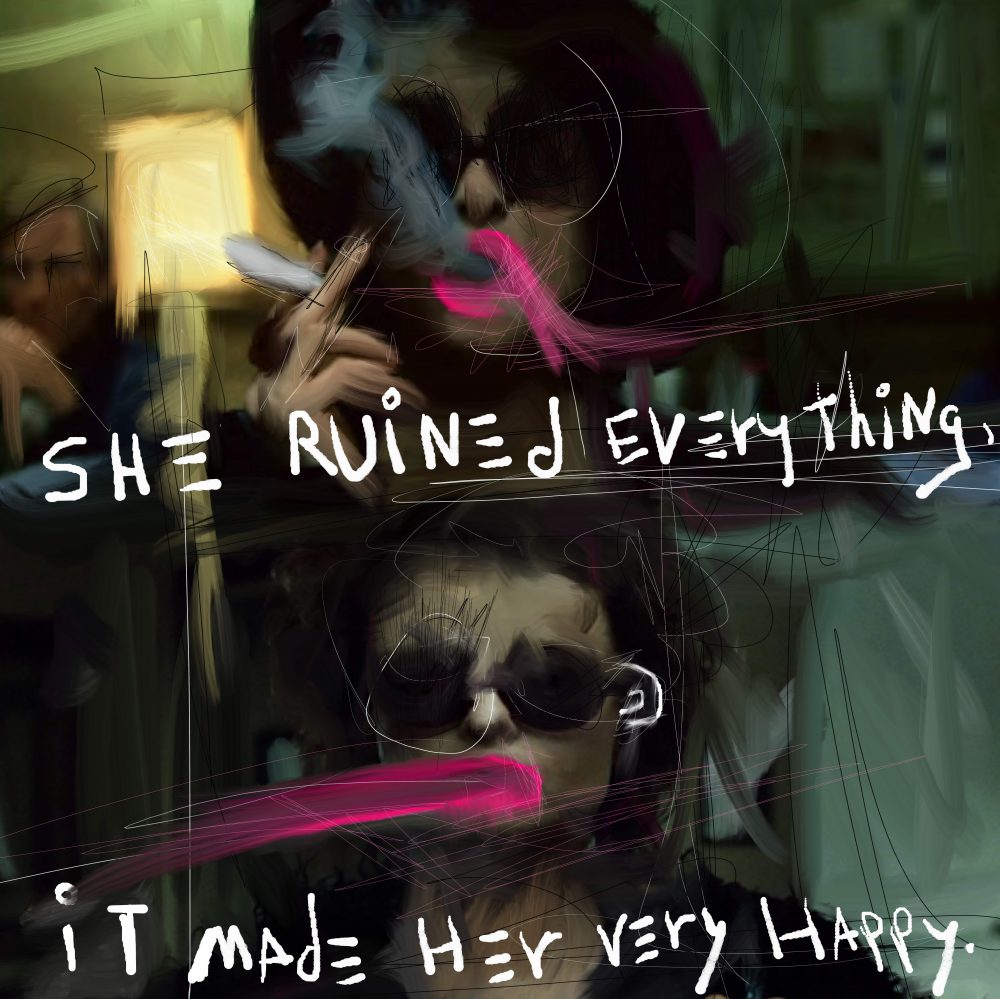 I read that you are focussing on “the mass-production of the individual”. What do you mean when you say?

I don’t remember saying that [laughs] but well, just like art, words also come from sporadic inspirations. What it means is that we are all one energy, yet we don’t even know ourselves. We have to make more effort in searching within us rather than in external possessions.

You are showing at Scope Basel shortly. What can people expect?

There is a Buddhist quote that says “expect nothing and accept everything and you will never be disappointed”. No, but really, I’m very excited about Scope. I’m exhibiting with an exciting new Milan-based gallery called One Arts Club alongside CB Hoyo and Roberto Del Rio, whom I consider to be good friends and visionary artists. All I can say is that every single painting is like a picture of one’s soul. So, they can see a soul if they know how to look.

John Paul Fauves‘ artwork will be exhibited at One Arts Club, Scope Basel, from June 12 to 17. Check out a full portfolio of his work here.

All images courtesy of the artist and Julia Mozheyko @ JM Art Management.