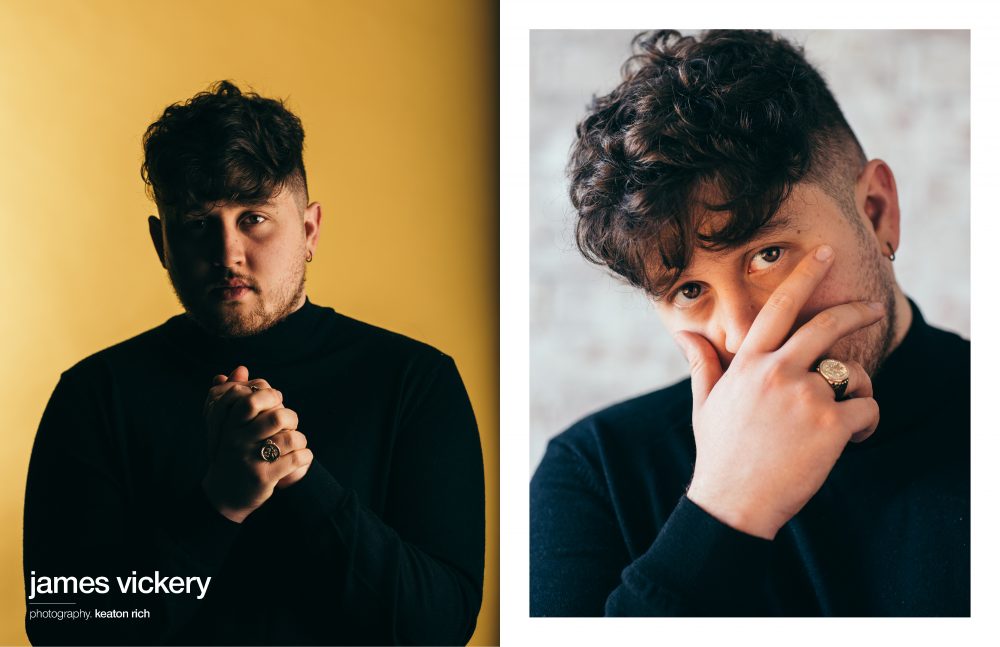 If you aren’t familiar with him already, James Vickery‘s name is one you should be taking note of. Earnest, heartfelt and soul-stirring, few voices are as powerful as his. Hailing from South London, the 24-year-old has been amassing successes since he broke through the UK scene in 2012 with Disclosure’s Flow; but he’s adamant not to let numbers define him and remains true to himself. His priorities set on penning his own tracks and live performing, Vickery’s approach to music is one that’s raw, harmonious, soulful and, above all, personal. With an EP hot off the press, we catch up with Vickery to discuss his unexpected start in music, the journey from folk to soul and mental health.

The power of your voice is undeniable. When did you make the conscious decision to pursue music professionally?

Thank you firstly for the kind words. It was actually kind of an accident falling into singing — I was born with a hearing impairment and went to a vocal coach to help me initially speak louder, several lessons later and I then found out that I had a decent singing ability through various vocal exercises. Music was always a passion of mine and as soon as I had the ability to sing I knew from that day on it was an avenue that I wanted to pursue.

How would you say Until Morning picks up from your previous EP, Complexion?

I feel there’s a certain element of rawness in the Until Morning EP that doesn’t feature in the debut EP. I’ve always said that true Soul and R&B is where I belong and the latest EP shows the direction in which I’m trying to take my career. I feel like my journey can certainly be showed throughout both EPs with the pure isolation and sadness from Alone on my debut to the infatuation and lust on Until Morning and Violet.

Now that the full project is out, is there a specific track that stands out for you?

I feel like Until Morning was a turning point for me. Regardless of the great numbers it’s done online through Colors and the recognition it’s given me; it was the sound I wanted to make for a long time and a lot of people told me it didn’t work but I stuck with my gut and now that song will forever hold a special place with me.

What would you say are the main influences in this EP?

I have a lot of influences in my music. Each song is very different stylistically I think we’d all agree but one thing I like to maintain is that my imprint is always left on it and as soon as I start singing you know it’s one of my songs. I feel NAO does this well in her tunes — her songs are extremely versatile yet her vocal is so distinct and recognisable. I was listening to a lot of Daniel Caesar and Mahalia in the build-up to writing this EP. 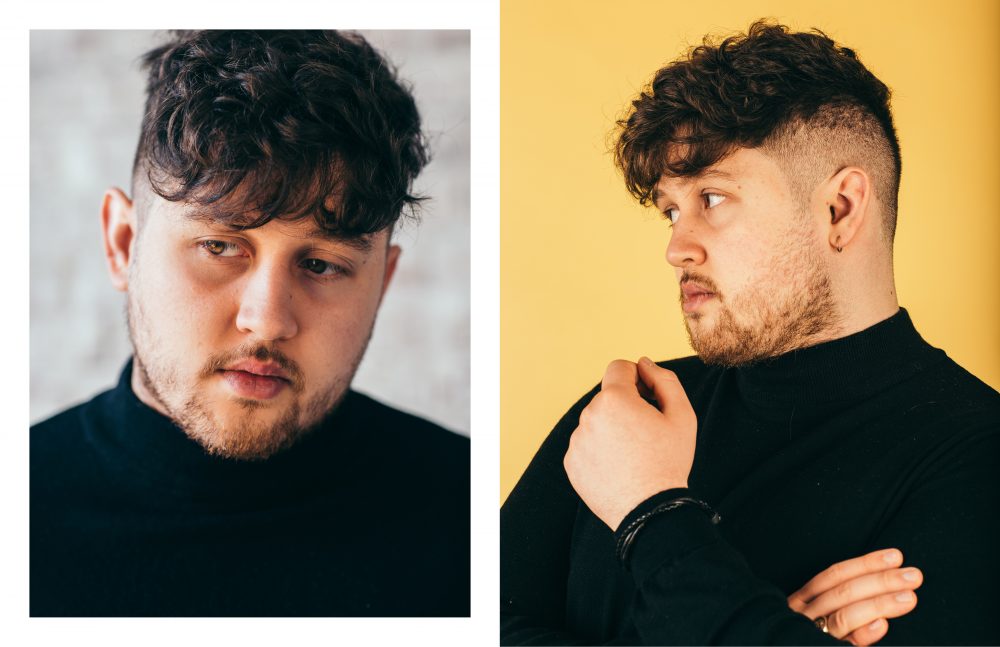 What’s your songwriting process like? Where do you draw inspiration to write?

One thing I always say is that my songs are deeply personal to me. I try and draw from personal experience in order to get that raw and passionate vocal across. Before we step in to write, I usually have an idea of what I want to write about, then it’s just vibing with whoever’s in the session with me until I get to a place I’m happy with.

Do you have any plans to drop a full album in the near future?

Your first singles Epiphany and Lately racked up millions of streams and your COLORS video is following the same path. Did you ever expect these numbers prior to releasing the content? How does something like that affect you?

Never in a million years did I imagine those sort of numbers, as I said earlier, the songs are all so personal to me, the fact so many people can relate is quite overwhelming. I initially struggled at the start of my career as I felt the pressure to live up to those numbers but over time I’ve learnt that I can only do so much, I’m proud of the music I’ve put out there and that’s enough for me.

You’ve put emphasis on the importance of live performing. Why do you feel performing live is so important to you? What does it offer as opposed to studio sessions?

I’ve always seen myself as [a] live performer first, recording artist second. The thrill of being on stage and meeting people who enjoy your music is incomparable. Every show is different and I don’t think you can quite emulate that feeling in a recording studio.

Speaking of… you’ll be touring the UK, Europe and the US soon. Are you excited? What can people expect from your shows?

I am so excited! The fact people all over the world want to see me play live is still baffling but I feel lucky every day that I get to see the world through music; it truly is a blessing. Anyone who is a fan of the music is hopefully going to have a great time, the live show is something I pride myself on. I’ve worked hard on it with my team to make sure it is the best it can be.

You’re dubbed as a soulful R&B singer but you started out in the folk arena, clad with your acoustic guitar. How do you feel you have matured since your start almost a decade ago? How would you describe your journey to find you sound?

Haha, you’ve done your research! Initially, when I started out making music at around 17, a guitar was the only instrument I had available to me, I couldn’t play piano or drums, and I didn’t know of any producers, so I had to work with what was available to me. The styles are so different but I like to think there’s an element of Soul even way back then. I had no idea what sort of music I wanted to make or what kind of artist I wanted to be — I don’t think I’d be the artist I would be today unless I went through that phase! 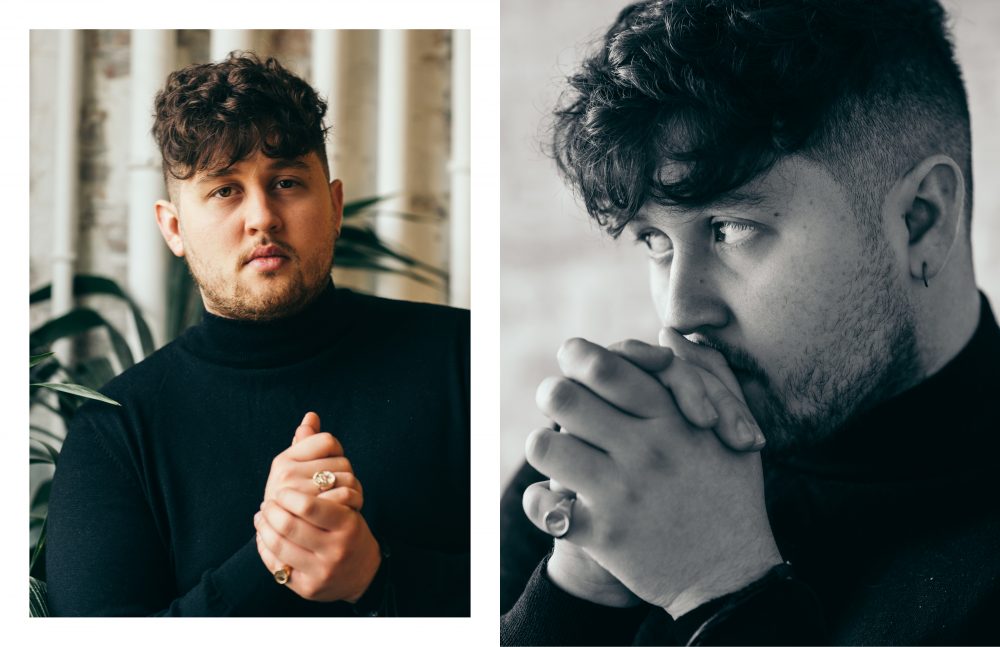 Now, you combine your powerfully emotional voice with electronic production. How do you find the balance and blur the lines between genres to create your own distinct sound?

I think it’s a collaborative thing. I love working with different people and combining styles, I came into the electronic scene knowing nothing about it! I was brought up on R&B, Soul, Motown and Funk. I made initially what I thought sounded ‘cool’ and off the back of it sprung the style of music I make today. I used to hate having such a distinct voice when I was younger as I thought it made me sound strange, haha, but over time I’ve learnt to love and embrace it — I think that’s the main feature that gives my music the sound it has.

You’ve been earnest on social media about your mental health and going through rough patches now and then — writing things like ‘Something Good’, which you shared on Instagram. How does your music help you out in times like that?

I’ll be honest, struggling with mental health was a recent venture for me and it hit me like a brick wall. I’d never thought I’d be the person to struggle with it but it honestly can happen to anyone at any time. Being open and not embarrassed about it helped me a lot. I feel so lucky to have music — and together with exercise, it acts as a healing tool for me and a place where I feel I can clear my mind. It’s such a beautiful thing.

A lot of people might recognise your vocals from your collaboration with Disclosure in 2012. Do you have plans to keep collaborating in the future? Who would be your dream collaborator?

There are a few people on my dream list… I’ve been very open about wanting to work with Tom Misch, it’s a dream of mine and something that’ll hopefully happen when the time is right! I collaborated with rapper Mikill Pane on my latest EP and it was such a great experience and working with a rapper is something I’ll definitely look to explore again. I’m working on trying to get some really great singers on the next project, for some reason that seems to have died out over the last few years in the music industry, I’d love to bring it back!

Lastly, what can we expect from you the rest of the year? Anything you’re particularly excited about?

There are some really exciting things happening for the rest of the year (a few things I can’t talk about just yet naturally) but I have a headline show on September 17 at Jazz Café and obviously, the European tours coming up which is mind-blowing. I’m hopefully heading out to L.A. before the end of the year in the hopes of ticking off some names on that dream list…

James Vickery’s sophomore EP, ‘Until Morning’ is out now. Listen to it here. Get tickets for Vickery’s show at Jazz Café tomorrow here.