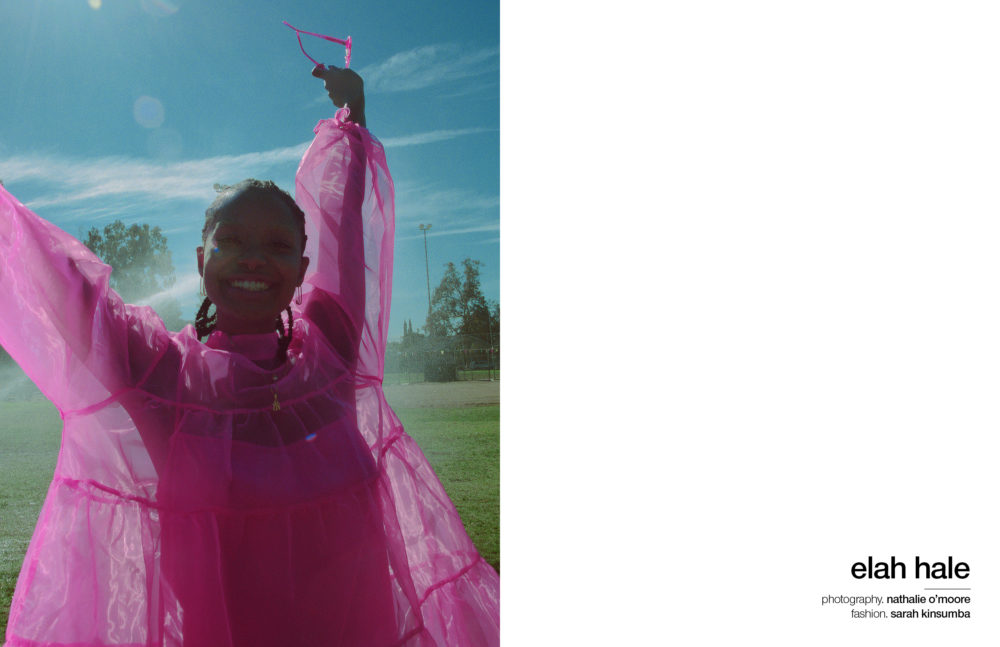 In the midst of a global pandemic, 20-year-old breakout singer Elah Hale released her first EP Room 206. Hale’s debut project transcends genre with ease. It’s filled with uplifting pop melodies, atmospheric production, and relatable lyricism. Making the most of her isolation time, the New York native teased fans with sneak peeks from her new project via Instagram. She shared soft ballads and home truths like “I’ve been watching Twilight non-stop.” Social media has always been means of creative connection for Hale. At 17 she began self-releasing music online, which led to a deal with Interscope Records just three years later. Hale believes her parents’ decision to focus on art-based careers was the gateway to her becoming a musician, but also thanks Tumblr for helping her grow her artistry. In light of Hale’s debut project, the rising star chats to Schön! about genre evolution, how people watching inspires her writing, and keeping creative during coronavirus lockdown.

How are you keeping motivated while being indoors?

Every day is emotional. Going on Twitter is inherently stressful now. I’ve been taking a lot of that and channelling it into my music. I’m just lucky enough to have a studio in my house. My partner makes music and I have been working with other producers remotely. The community I have around me has kept me really creative. The pure stress and emotion is bad but also really good for me in terms of making music.

How did you get started in music?

I probably shouldn’t have done this but I met my friend Stefan, who was a photographer on Tumblr, when I was 15. [I sent him a message] telling him how I’d love to work with him. He said he’d come to my apartment. At 15 I probably should have thought that through but it was very much an “internet New York City” sort of thing. He’s older but he’s like a big brother to me. We shot for a really long time and I showed him my talent. We recorded it and put it on Tumblr. It gained like 300,000 notes. People were following me on Instagram and it became a very direct link to my personhood.

What inspires your lyrics?

Some of it is personal experience but a lot of it is people watching or talking to my friends. It doesn’t feel like I have enough love, heartbreak or exciting adventures to write music that can sustain me for a very long time. I learned very early on to take inspiration from what’s around me. I’ve taken text messages that people have sent my friends and things that I’ve overheard to write a song. I took the lyrics that a friend’s ex-boyfriend sent to her and did a series of songs around that text. 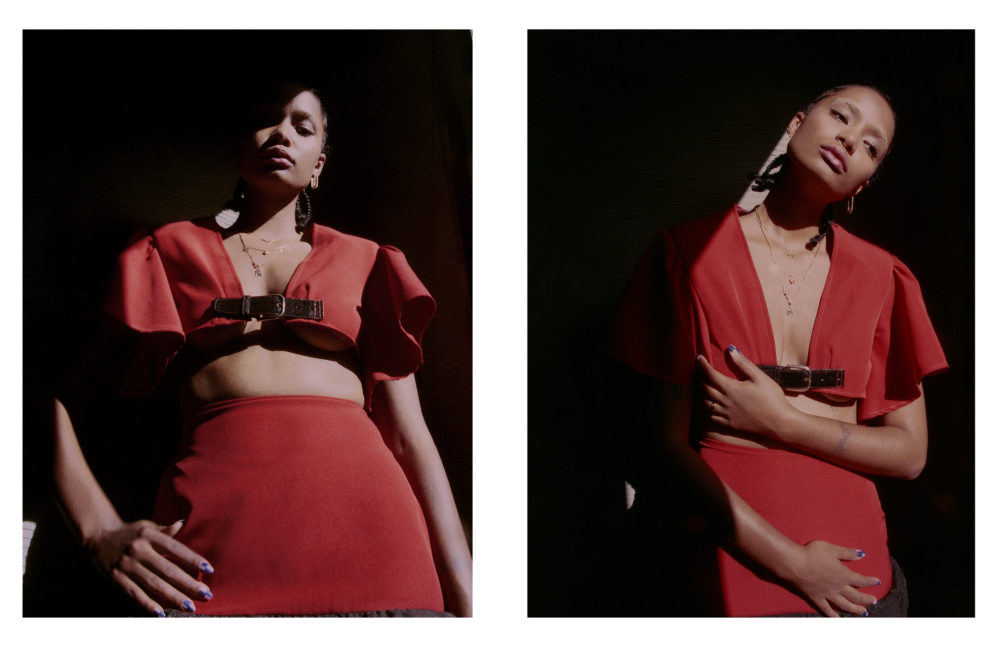 Your music videos seem to always have a story behind them too. How do you make an idea come to life?

I think it’s hard making up videos then figuring it out direction wise. I’ve learned that I need to start directing things myself. I wish we were still doing music videos similar to 2005 because they were so creative and thought out. I think now everyone just wants to be beautiful. Of course, I want to be beautiful but if I can take a moment to be creative, interesting, funny and witty, I’d rather do that. A person that does this very well is Billie Eilish because she makes music videos that are interesting in a different way.

On Spotify, you’re listed under ‘Alternative R&B.’ What do you think makes your music alternative?

As long as I’m a black woman making music that is too hard to put in a box they’re going to put it under “Alternative R&B”. We are still living in a world that functions under genres and I wish we weren’t. I don’t agree with it but I know race is playing a part in why I’m getting put in a “different” genre. I think the thing that I like about being put in that genre is that I am able to have all of it. It just gets complicated because I don’t want people to come to me and say [you don’t fit in this genre.]

That being said, with the rise of alternative R&B categories do you think core R&B has died out?

The thing that gets really difficult is people that are slightly older have seen the beginning of a lot of music. For example, Hip-Hop. Snoop Dogg is still alive. Those people are now living in the world of Migos and are looking at that as the bastardisation of what they created. When in reality it’s an evolution. I think the same thing has happened to R&B. The R&B that was happening in the ‘90s is not the same. The problem is we’re still functioning on the four main genres and everything feels like a muddled version until you want to rename it. Nothing has been destroyed, it’s just not the same anymore.

I want to work on my album a lot. This now is the time I was supposed to be sort of writing it. At the same time in New York City, one in every 800 people has COVID. It’s very real and very stressful. So I’ve been planting and that’s been huge. I’ve been cooking and that’s the hugest. I almost have no goals other than taking care of myself. 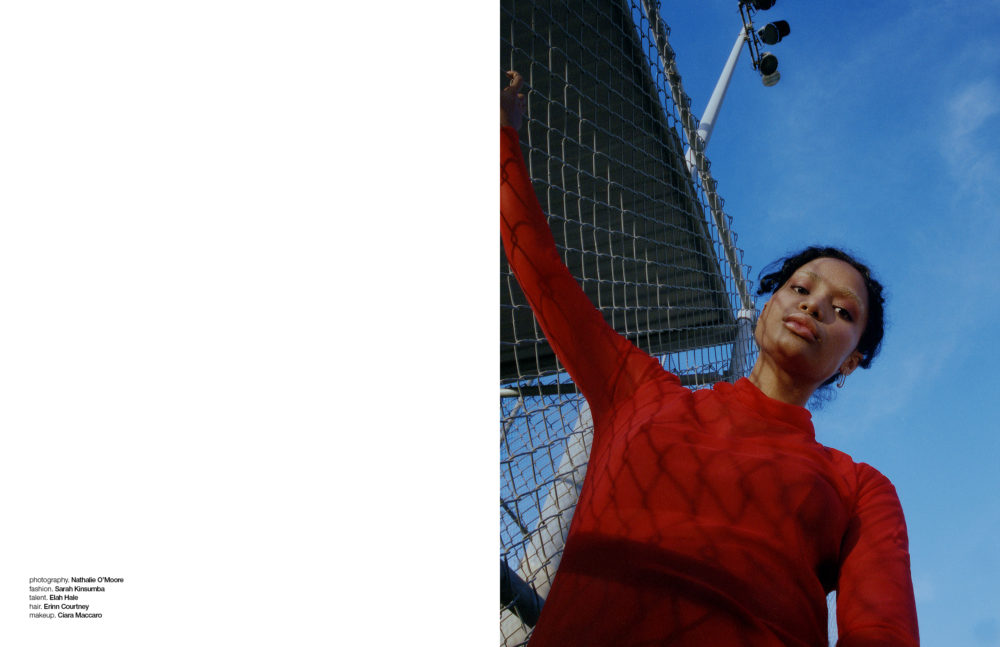 This Schön! Exclusive has been produced by