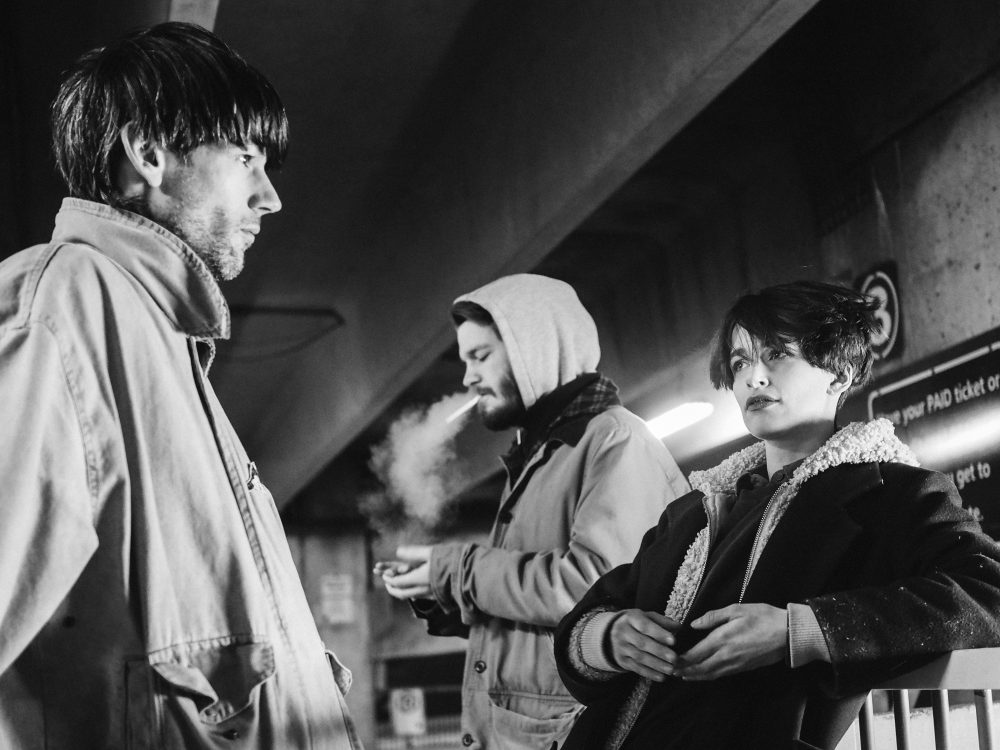 Deux Trois are a dynamic trio hailing from Ontario, Canada. Comprised of guitarist and vocalist Ben Webb, bass player Benjamin Nelson and singer-percussionist Nadia Pacey, they bring a refreshingly mood-driven touch to guitar music. Melodic riffs and prominent drum bass lines are a Deux Trois signature. Their sound is defined by syncopated grunge beats reminiscent of the late nineties and their songwriting is poignantly autobiographical. Schön! chats to the up-and-coming band on Ontario’s music scene, trying to stand out in the internet age, and what to expect from their brand new EP, Health, which releases today.

Let’s start with some background. Who makes up Deux Trois? 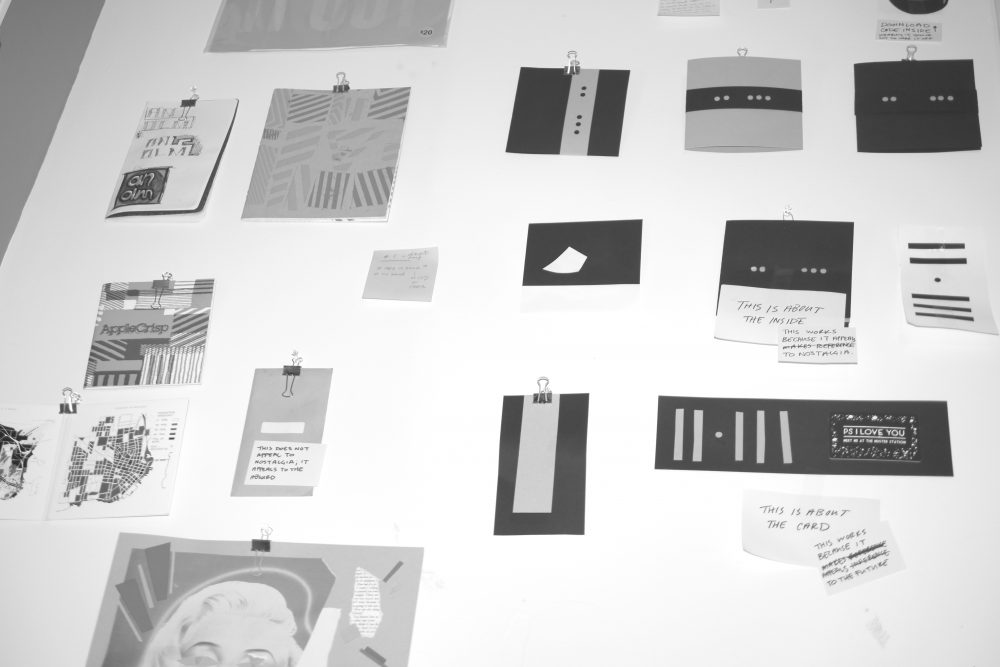 How did the band come about?

BN: The band came out of the ashes of another band, like most of my bands.
NP: The band came about in the recording of Health and the first tour we did. I barely knew Benjamin when we first started making music. I was working [on] being a musician professionally without a day job. His band Slow High offered to back me for a secret show. We worked well together [so] the whole band, Benjamin and I continued to make music together. In September, Benjamin and I recorded a demo. We got a hold of our sound when Ben joined in November.

What’s the story behind the name “Deux Trois”?

NP: I got the idea while I was in the bathroom of the Royal Tavern. 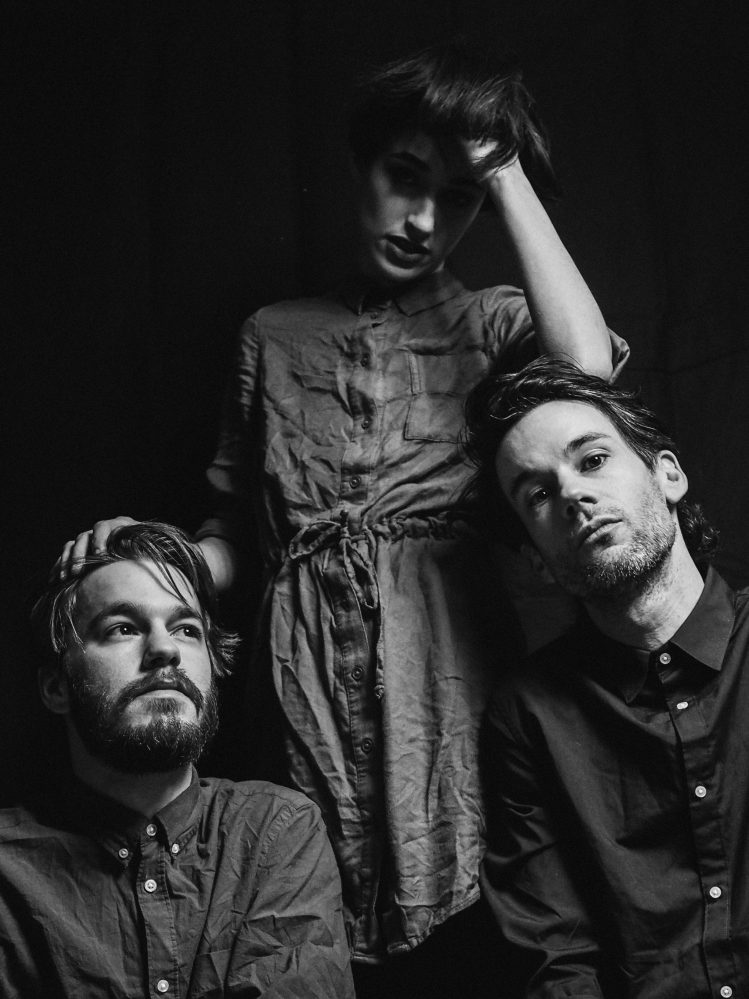 You’re based in Ontario. What’s the music scene there like?

BN: Extremely varied, there’s no cohesion in terms of musical style or scene, but there’s a very supportive community of artist types and music enthusiasts including hippies, children, lesbians, dogs, street cats.
BW: Geese.
BN: People with art jobs.
BW: People who come up with jobs.
BN: People who come up with art jobs for themselves.
BW: Bicycles. Everywhere.
NP: There’s a lot of experimental rock here. Drone artists. A lot of interesting guitar tones, and fantastically mixed live percussion. Many artists who care a great deal about giving their all to their music. 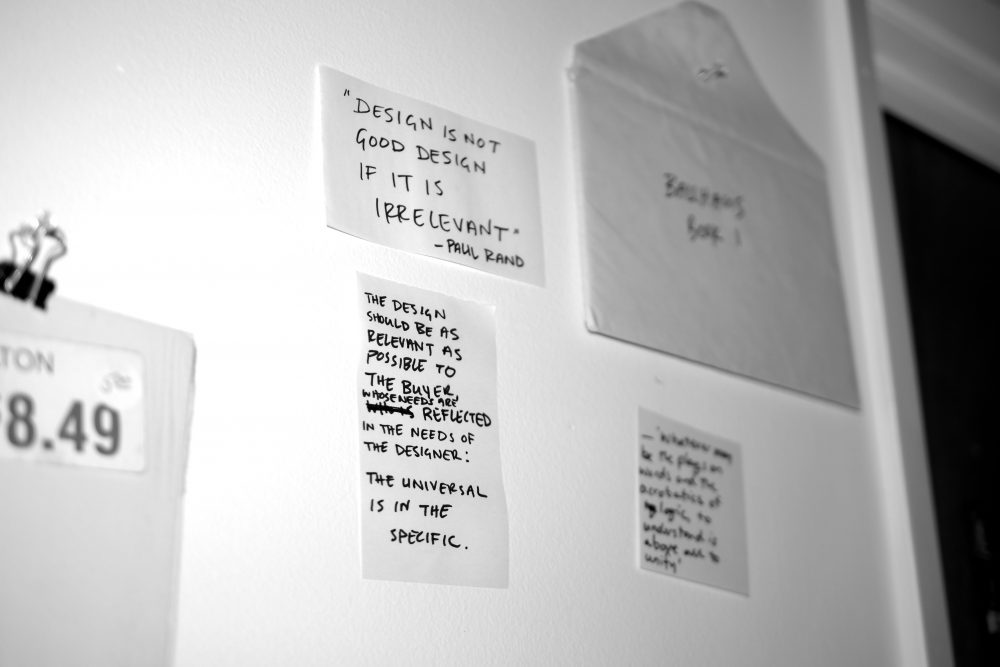 Which artists influence the kind of music you make today?

What do you typically use as inspiration to create a song?

NP: I don’t wait for inspiration. I write when I can, and write at will, sometimes many experiments one after the other to find something that I really feel. That’s in terms of melody, lyrics, percussion.  I’ll have a vision try to immediately write it.

How does the songwriting process go? Do you start with lyrics or melodies?

BW: You definitely start with melodies. You do that often. You’ll start humming a melody and record it, and expand upon it.
NP: Yeah, it can be either one, lyrics or melodies, or percussion. I write differently on the guitar. But we’re also exploring new ways of writing songs. 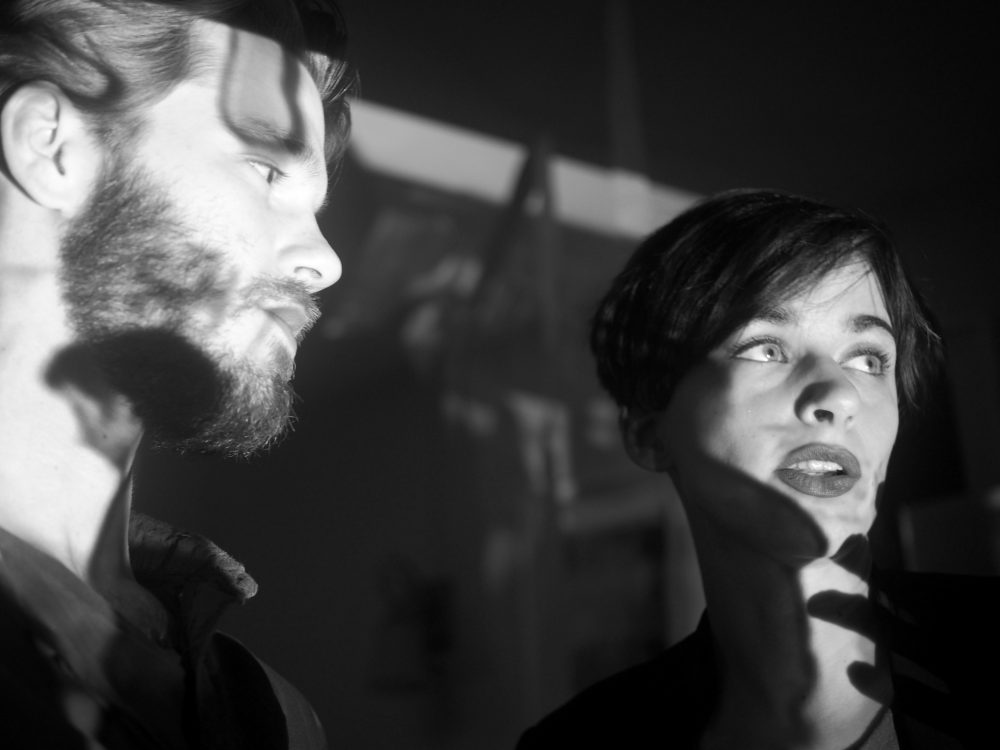 What’s been the most challenging thing about pursuing music?

BN: The actual amount of work that goes into getting your band noticed.
BW: It’s a pretty major lifestyle adjustment.
BW: I mean it’s hard — you take time off work and you sit in bars that whole time just waiting. It’s hard not to exist in bar culture and try and be a reasonable human being.
BN: Yeah, waiting. Waiting is the thing they don’t tell you about.
NP: Staying competitive while seeing that the whole thing is a community. There are a lot of good people but there is a lot of competition. It’s very difficult to see what is and isn’t something that should be treated as a competitive aspect of your work as an artist, and giving yourself a moment of breath when you see that what you’re doing could take twenty years or just one, depending entirely on the conditions of your environment.
BN: [laughs] I wasn’t laughing at your answer – I was laughing at Ben picking up some plastic. 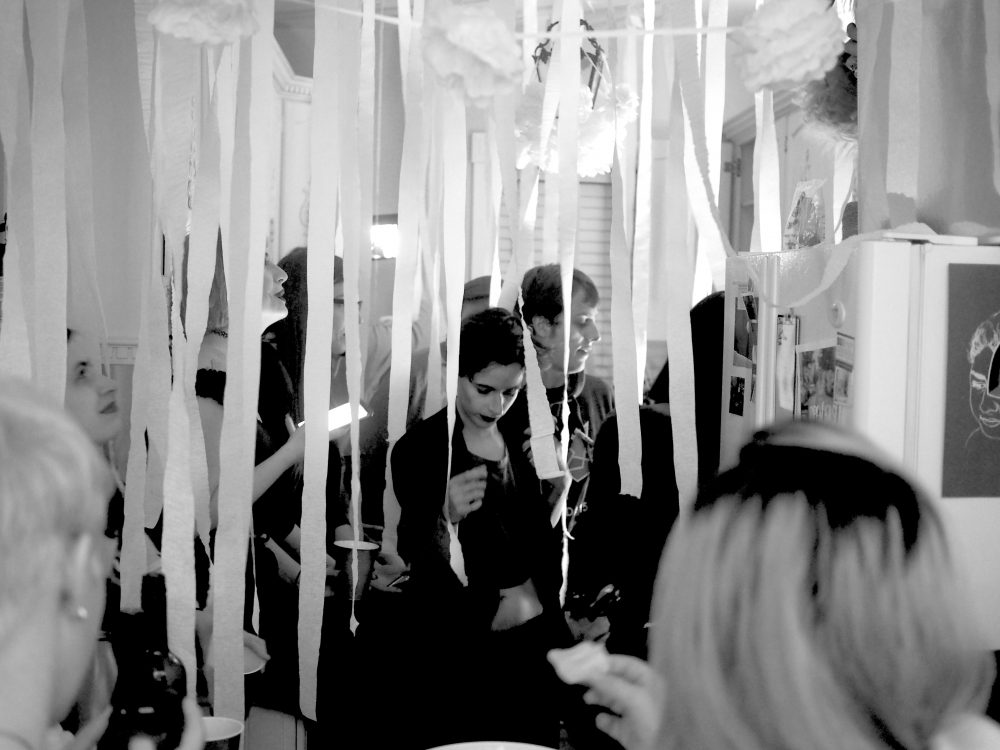 Do you feel the internet age has made it easier or more difficult to get your music heard?

NP: It’s just a different animal than it was before. I’ve been using Facebook since 2007 and acknowledging it as a tool for music business since I was 16. It just needs to be thought about differently than it once was.
BW: I don’t know if it’s easier or harder, I know it’s easier to put your music out for a mass audience. You can do it from your bedroom, but that mass audience is so inundated that you have to have something that sets you apart to even be noticed. There are so many people — great artists releasing art on the internet and a lot of them will never be seen.
NP: To speak to that — the phenomenon of content going viral says to me that there is certainly an organic avenue there for release to a mass audience, who can sometimes find something that speaks to the zeitgeist without having to pay for that eye.
BW: I would agree with that. We didn’t exist as adults in a world that wasn’t constantly connected. You see people completely cutting off from technology and some that are so involved with it, that it’s hard to connect with them in a  meaningful way that isn’t Facebook.
BN: I come from the era where you had to listen to the radio to find new bands or read magazines. However previous music projects wouldn’t have been successful without music reviewers on the internet.

Your latest single, Dave, sounds pretty personal — what’s the story behind the track?

BW: I wasn’t around for the writing of Dave but to me, it’s a story of heartbreak and unrequited love and the humour of that whole situation.
NP: Yes, I like that, and because it’s about old feelings of mine for a person, I’d say that’s about right without getting too close.

What can we expect from your upcoming Health EP?

BN: Eight moving and fun songs.
BW: Some starkness. A little bit of joy and a little bit of sorrow. Hopefully something you want to listen to more than once.
NP: The story — dark in parts, bright in others — of my life over the past four years. The oldest song is four years old. The newest four are from last year. I would expect some juxtaposition between sounds and songs.

Why the name Health?

BW: I think all of the songs touch on matters of personal, physical and mental health. If not directly then definitely tangentially.
BN: We all struggle with making healthy choices. It seemed appropriate.

Is there a track that particularly speaks to you on the EP?

BN: Caves in My Cheeks might be the one because I struggled with playing the same line through the whole song and figured out how to vary it. It turned out to be a song I’m very proud to be a part of.
BW: Lyrically Caves in My Cheeks and Blur would be two I connect with. Absolutely.
NP: I love myself too much to choose just one. Caves or Dave. Roy, maybe. 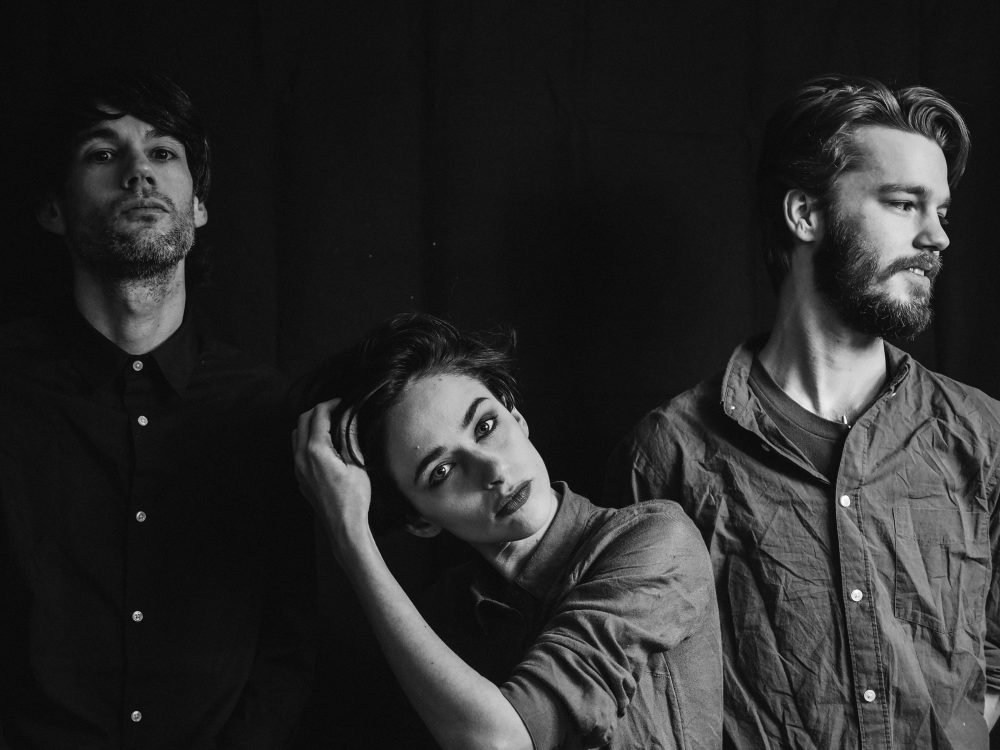 What do you want people to feel after listening to Health?

BW: Ultimately, I want it to be a life-affirming experience.
NP: What does that mean?
BW: What doesn’t it mean? To me, it touches on some very personal subjects, but it’s also not afraid to make fun of those sad bits.

NP: We’re playing a couple of shows in and around Kingston, where we live, including our first festival, Wolfe Island Music Festival, and working on new material. We’re going to keep playing shows and just going for it. Raising money to do tours and possibly making an interesting film for January.
BW: Yeah, I would agree with that. I hope we keep working as diligently as we have been, and if things continue this trend, that puts us in a happy spot artistically.
BN: Play shows, make another record. Try to make it as a professional illustrator outside of music.

Deux Trois’ new EP, ‘Health’, comes out today, June 8. You can listen to it here.