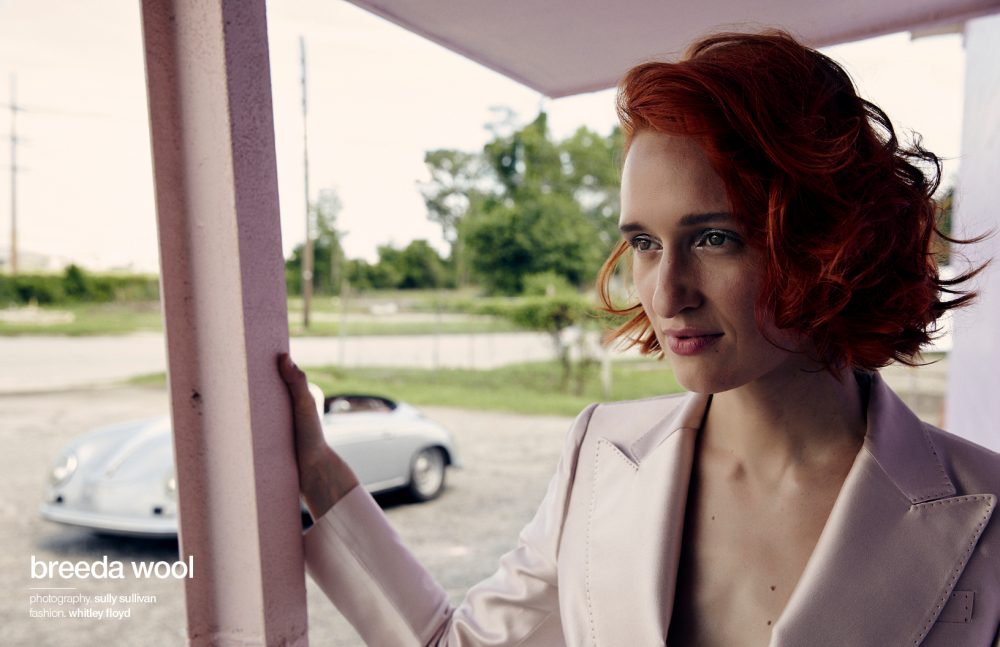 The Breeda Wool we know from the screen cut her way through by playing a true-to-name Christian-turned-lesbian called Faith DeLuth. Over the years, Wool has developed a chameleonic ability to play an array of different roles – including a serial killer’s friend – to perfection. Following her breakthrough role as Faith on Lifetime’s critically acclaimed drama series UnREAL, the ginger-haired American actress’ fan base was such that director Sarah Gertrude Shapiro created a ten-episode web spin-off, The Faith Diaries, to zoom in more deeply on the character’s story. Wool subsequently pursued her twin interests in LGBT rights and female-led films, starring in a short lesbian coming-of-age film, AWOL, in 2010 and its longer feature-length version in 2016. More recently, Wool has altered course: as well as starring as Eden in the indie drama Erasing Eden and as Lou Linklatter in the American thriller serie, Mr. Mercedes, she has also laid her hands on writing the script for Oasis and produced the short film Rflktr.

While Wool has received several accolades for her screen acting talent, she caught the acting bug on a theatre stage – which lead her on to landing a scholarship to study Psychology and Theatre at New York-based Wagner College. Add to this that she spent the next ten years in New York performing in theatre venues, engaging in performance dance and sketch comedy as well as starring in Shakespeare For Kids and commercials, and you realise the kind of impressive all-around talent that she is. Here, we chat with her about street dance world magic, the age-old question of women pursuing creative careers, and art as activism.

Your move was one from stage to screen. How was that transition?

It was really fascinating. When I was a kid I always loved photography and what it could tell us about the past. I still get lost in old photos of my family or generations of family that I never met. Movies from another time were incredible for me as a kid. I would watch AMC after school when that channel just showed old movies; now they got all sorts of cool programs about meth and other follies. But what I loved was the time capsule aspect of photography. The collaboration of film is a moment captured that will always remain the same even when our perspectives change. I remember when I started doing film and television, a theatre director friend of mine said he thought [theatre] would have a tremendous resurgence because, after we all get inundated by our televisions and devices, we will crave people in a room together like never before. I’m [in the] game for that too if such a resurgence comes around. 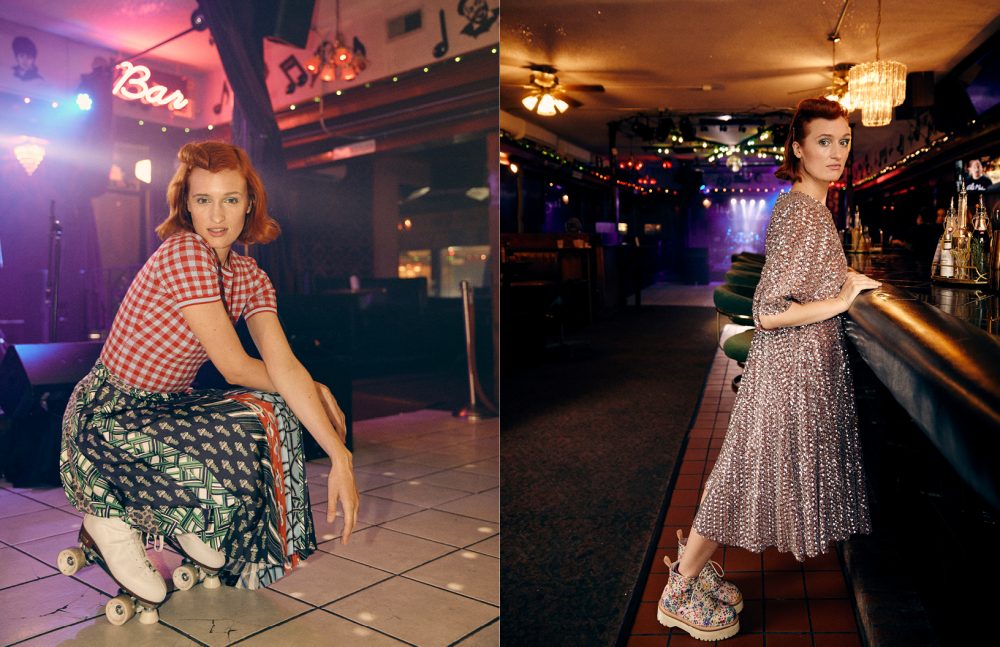 You’ve got an incredible acting background, including working on avant-garde type dance performances. How has that type of body-conscious practice fed into your acting today?

Yeah, I was a street performing wolf for about two years of my life. I would hunt people in the streets with a group of other lady wolf dancers. This story is so long and bizarre you’d have to have a whole other section for the wolf women. But I’d certainly say that once you’re running around Barcelona dressed as a wolf and being chased by hordes of angry street children, that type of experience never really leaves your body. Also, street performing is a very intense performance medium, you can’t control your environment at all and you’re using unknown space [in an improvisational way] which I think has helped me a lot over the years. Also, I think film and TV is a very non-verbal art form, [so] some wild street dance wolf magic can always help.

You once said your father told you that if you invest in your passions in the longer run, your odds at landing a creative career are more favourable. How was it to hear such a piece of advice from a father who was also a scientist?

Ha, I’m not sure if my dad ever said that exactly but he was extraordinarily supportive of my career. My father was an incredible chemical engineer in the field of green science. He was a pioneer in his field. I will always be so proud of him. He met with Boeing one time to try and make planes out of renewable materials. The Vice President asked my father at their meeting, “what do you think the main question is when we’re deciding whether to hire a new engineer?” [and] “did you play with model aeroplanes as a kid?” My father grew up in Ireland in the ’50s and built his own chemistry lab in his attic. I think he always thought if you can make your childhood game or dream into your passion, [then] perhaps you can play forever, which will generate the most innovative things. I also think the 9-year-old versions of ourselves have a lot to teach us. My game was “imaginary”, a.k.a. make-believe, play-pretend, and Barbies.

Audiences got to love you mainly through your TV roles. Is film acting something you’d be keen on exploring more in the future?

Yes, I love film. Although TV is so amazing, it feels like a 10-hour long movie. Mr. Mercedes the 20-hour epoch. In the last few years, I acted in some beautiful films including AWOL and Automatic at Sea. I am about to start production on a collaborative film with Kestrin Pantera directing, Milana Vayntrub, Sam Littlefield, and Melanie Hutsell [acting]. I think [it’s] going to be very very special. Also come out to see The Slows at New York Film Festival at the end of September, [it’s] an extraordinary film that I acted in, written and directed by Nicole Perlman. My dream is to be writing and directing straight from my own voice. 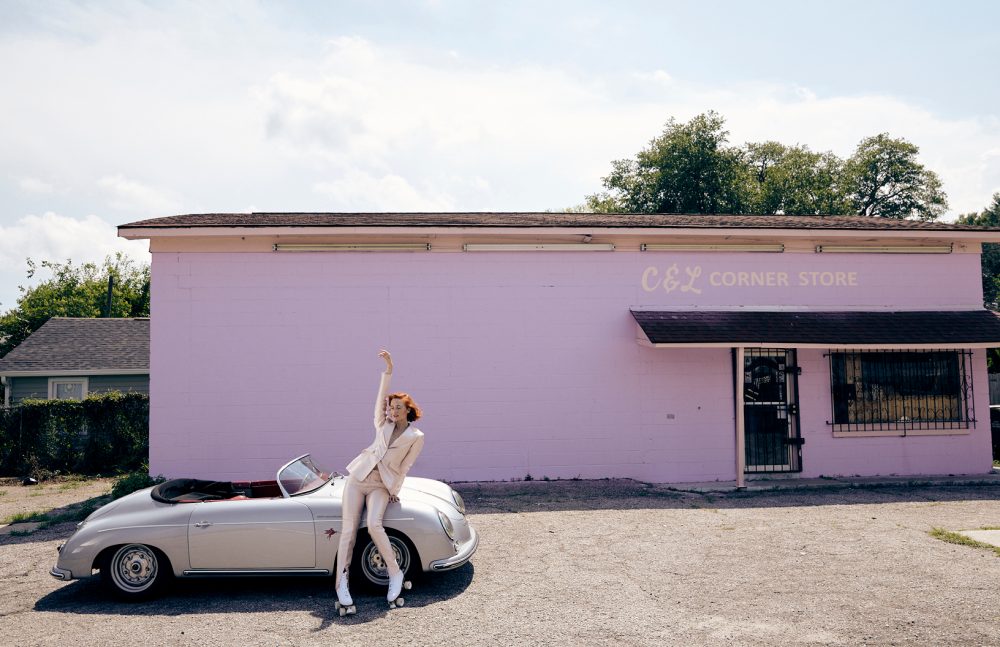 Your much-loved role as Faith was born through UnREAL and her umbilical cord was cut off, so to speak, with The Faith Diaries. How was the experience of having a web spin-off created focusing on your character?

When I auditioned for UnReal, we were all given Sarah Gertrude Shapiro’s short film Sequin Raze that she had written and directed at AFI. It was the seedling to which UnReal grew. I thought it was a brilliant piece of art. It was both incredibly nuanced and also swinging sledgehammer feminism and nihilism. I loved it. And when we went to shoot The Faith Diaries she brought a lot of creative people back from her original film and wrote and directed the whole thing herself. I felt very honoured to have made that with her and now that UnReal is over I cannot wait to see what that woman makes next!

You’ve played quite exploratory female roles – sometimes self-assertive, sometimes shyly tucked in her shell. Are there any characters you would absolutely not go for?

I really like to work with poetic people who are trying to say something. I think I could play any role in that type of creative environment. Mr. Mercedes really nurtures and fosters a creative energy both on set from Jack Bender, and through the story with David E. Kelley and Stephen King. Playing in a well-made world makes my job pretty awesome. So I guess what I try to get myself into is creative spaces where people are thinking about what they’re making and how it could impact people. How do you go about preparing for your roles?

I sit in a room by myself and play make-believe.

Are there any directors, actresses or actors whom you’d love to collaborate with?

Oh, so many. Patty Jenkins– Monster is a masterpiece –, Penny Marshall – oh how I love thee… I want to make like 10 more movies with Kestrin Pantera and Milana Vayntrub. I get now why people run off to Hawaii and make movies with their friends. I would love to make a movie starring my sisters and mother. I also have a whole long list of industry people whom I admire. 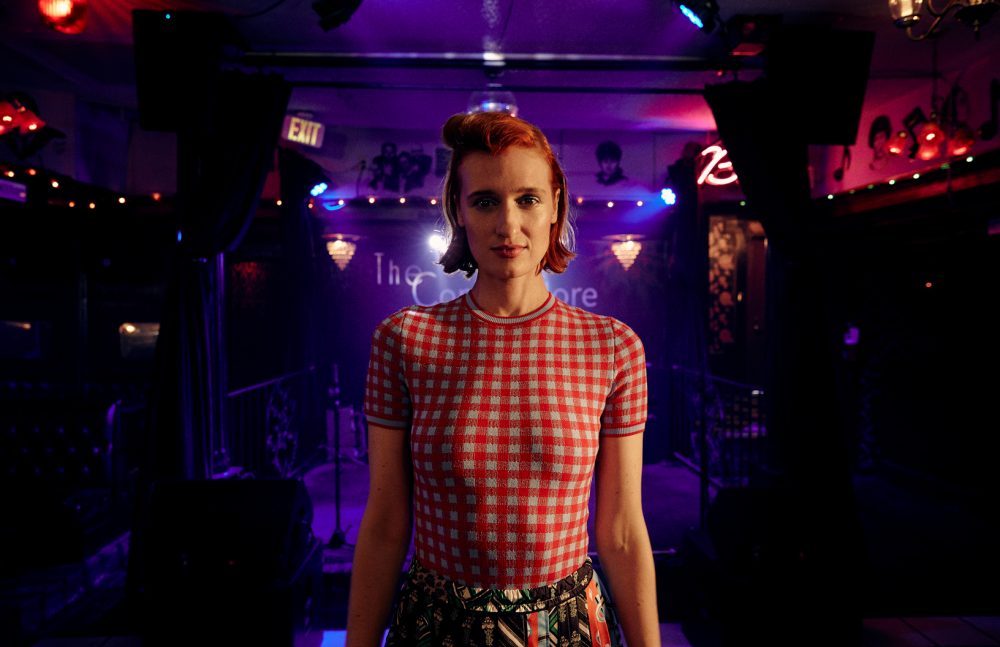 Throughout your career, you’ve been interested in supporting female creative teams. What was your experience working in female-led productions?

My career, from the very beginning, has been supported by women filmmakers. My bosses along the way have been more women than men. Despite my personal experience, women film and TV makers are still incredibly underrepresented. Women across all professions are systematically blocked from expanding their careers, sometimes both overtly or more subtly through a thousand institutionalised obstacles that keep women from working: like not paying women as much money, or not allowing a shared system for maternity leave for either parent in the US. Childcare in the US for mothers who would also like to have a career is basically the amount of a second yearly salary so it becomes a class problem immediately. The film and TV business, like most businesses in the US, have systemic bigotry and demand exceptionalism from both women and minorities. It becomes harder for people to grow or learn through mistakes. So a lot of the women that I’ve worked with have had that looming in the background [–] sentiments like “if my first film isn’t a hit I’ll never be given a second chance because I’m a woman”. You can’t just be more qualified than your male counterpart, you basically have to be the first rate right out the gate, never make a mistake, and already be “proven”. Ladies are a bit stressed. For all the creative strong white men out there, if you keep winning prizes for a rigged game, no matter how amazing your art really is, it will always have a smear of mediocrity. Your art can only truly flourish in a place of inclusion. 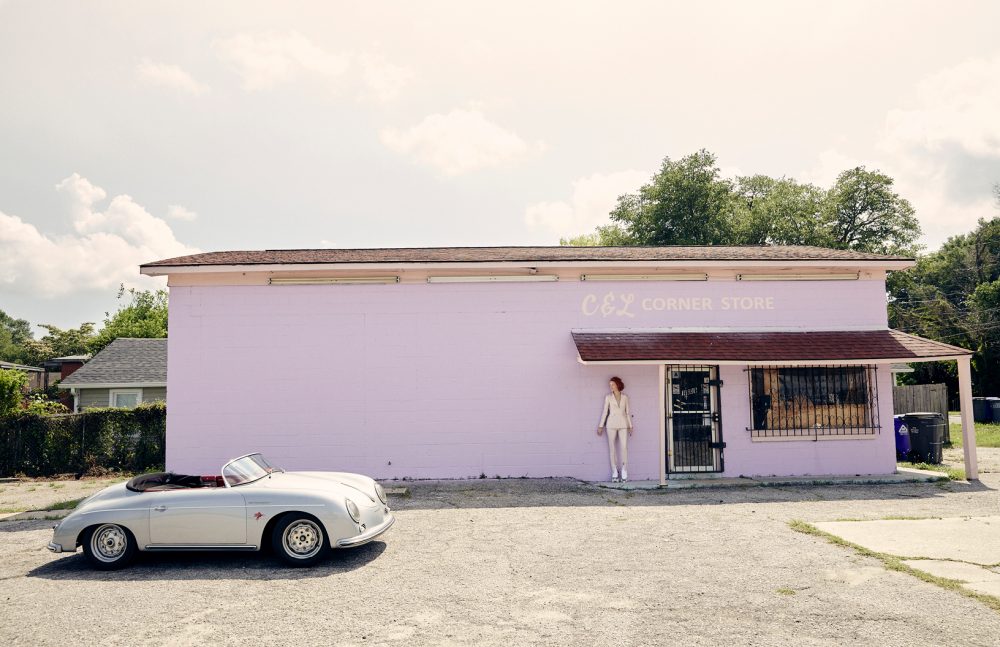 You’ve spoken out openly about your support for institutions like Lambda Legal and Feminist Majority Foundation. As an actress who’s portrayed characters who are not universally accepted, do you feel you’ve got a responsibility to move the debate around female rights forward by supporting such institutions? Any future plans to take your activism up further?

The United States is in a very politically tumultuous time. I have been doing a personal inventory of definitions of words right now. Words like citizenship, voter, justice, social justice, taxpayer, government. I think these are concepts that if you do not have a clear definition for yourself then someone will come along and define them for you. I try to evaluate how I am personally culpable in systemic racism and an expanding class division in the US. I educate myself about the history of my country. Supporting Lambda Legal, Feminist Majority, Planned Parenthood, Everytown, ACLU, and so many amazing organisations also helps me participate in what kind of citizen I would like to be. It can be very challenging to know how to take action and I often use my art to express and explore my thoughts. Truthful art, I believe, is a source of radical activism. 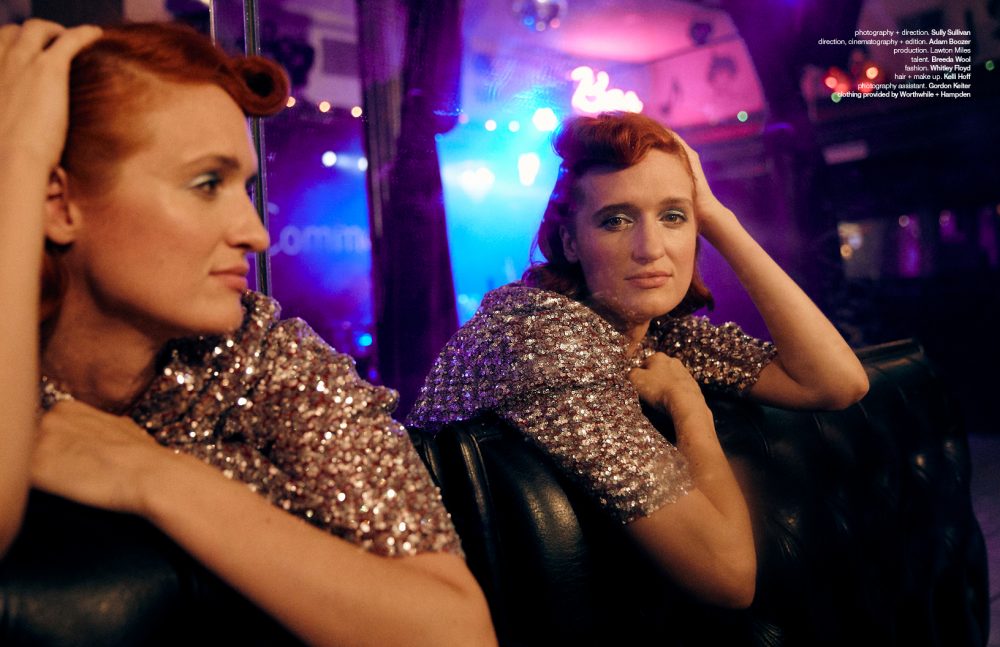 The second series of Mr. Mercedes started airing in late August this year. To finish off, can you tell us a little more about your character Lou Linklater and how you think she’s developed?

Mr. Mercedes is such a unique and different show, [it’s] Stephen King amazingness and I would love for people to come enjoy season 2. I play Lou Linklater and I’m our serial killer Brady Hartsfield’s only friend. After a violent encounter with my friend at the end of season 1, I discover who my fragile meek friend truly is and season 2 begins with my recovery and reckoning with this betrayal. Brendan Gleason plays our hero, detective Hodges, who tirelessly pursues the Mercedes Killer in season 1 and in season 2 we see he still has not left Brady’s side. I am so incredibly proud of what we made for this season and thrilled to share.