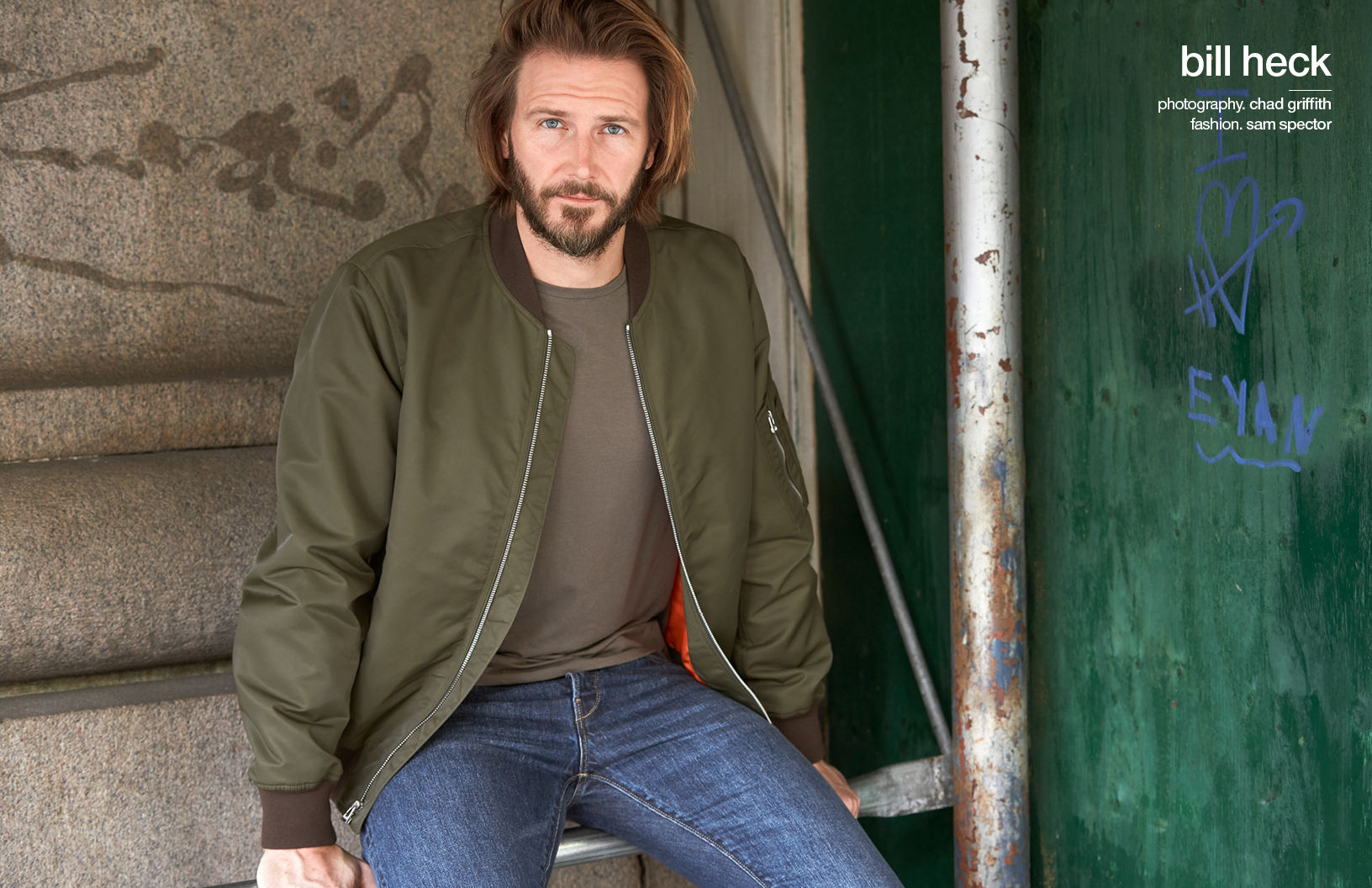 Joining the growing list of beloved television dads, Bill Heck stars as the devastated father Bruce in the new Amazon Prime Video series I Know What You Did Last Summer. With former roles in The Alienist and the Coen brothers’ The Ballad of Buster Scruggs, gritty performances are no stranger to Heck. Schön! speaks with the witty actor about getting into character, the key to surviving a slasher scenario, family and more.

Hello Bill! So nice to meet you. What drew you to I Know What You Did Last Summer?

Hi! Pleased to meet you, too. Creator and showrunner Sara Goodman drew me, like a renaissance master — shivering, naked, mewling life sketch model that I was. She’s impossible to say ‘No’ to. She is an actual wicked enchantress and unfairly used her high magic to ensnare me in her world. And I’m grateful. Not only is reimagining a slasher classic fun as hell, but having the space to dig deep into these sorry souls for eight hours of story would pique any curious actor’s interest. Top it off with the chance to take my family to Hawaii — an actual paradise that exceeded all expectations, and the safest place in the States at that point in an international pandemic — well, I’d have been a true fool to turn away.

Introduce our readers to your character, Bruce.

Readers, this is Bruce. He runs a charming cafe and rental cabins along a remote Oahu coast. He is on the town council, a respected leader in this small beach community. Never met a surfboard he didn’t like. Loves his family…what’s left of them. Maybe he has a deeply tortured past and a running list of sins so dark he can barely see them himself. Bruce, meet Readers.

How did you prepare for the role, and the series more generally?

Sara knew this character intimately before I got into him, so she was the primary resource. Also, for better or worse, I know from buried rage and regrets, and Bruce is an old hand on that front. Being a father myself, familiar with the many shades of joy and terror that brings, put me far ahead of the game. I basically shoved all our shared trauma into my chest then tried to walk a straight line. And listen, blond highlights go a long way.

It’s been almost two decades since the original movie’s release; how do you think this adaptation differs?

I have not seen the original movie. Tell no one.

Ha! Well, are you a fan of the slasher genre? Are there any films you are particularly keen on?

My pal, multi-talent actor/photographer/creator Jeff Galfer, loves a horror movie. I will watch one with him, on occasion, and happily so. But given the angsty teen that still lives within, I tend to prefer the torture in my movies to be that of, like, the Soul, as opposed to the Flesh. Which is fortuitous, because this series conveniently has both. 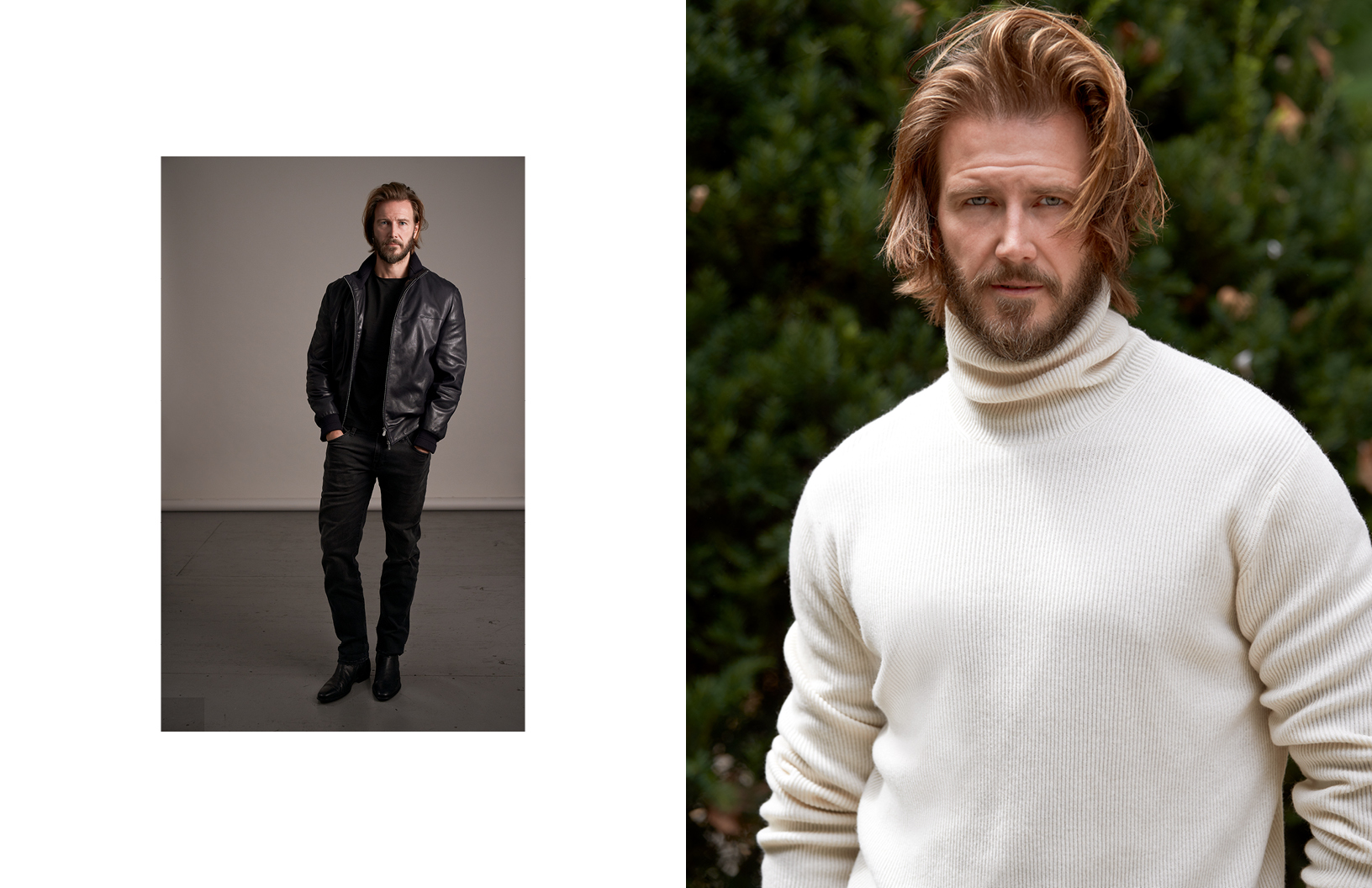 What would your tactics be to survive in a slasher film?

Oh, you know, throw on a bathing suit. Go for a swim, at night, in a small lake far out in the woods. Maybe some drugs and casual sex. If my pals and I found ourselves in any kind of trouble, I’d suggest we split up and demand that under no circumstances should we alert the authorities, and oh look there’s a seemingly abandoned barn that you guys are too scared to check out ok fine then I’ll go in alone…what I’m saying is: if I’m enough of an idiot, maybe the killer takes pity.

Most of the ensemble are less experienced actors; did you give them any advice? What advice would you give other young actors?

Most of the younger folks in the show have experience far beyond their years and a work ethic that puts most to shame. They didn’t need my help.

Much of any wisdom I may have I owe to my wife, Maggie Lacey (a far more sophisticated actor than I), so I try not to give advice. I fail at this, and am bad enough taking my own advice anyway, but…if a young actor actually asked I suppose I’d say: work your ass off but don’t take it too seriously, relax and try and make it about something other than you; remember your job above all else is to just tell the truth.

How do you feel in the lead up to a project’s release?

I guess it’s all a bit surreal as most of the work has finished long before. I don’t get as nervous as I used to, just curious about how all the mechanics came together, curious about how that particular machine will land with people who have no direct relationship to the making of the thing. I enjoy the party, and celebrating each other’s efforts. I’ve been fortunate over the years to collaborate with people who truly care about what they do.

You have done film, television, and theatre — how does your process differ for each? What do you like most about each medium?

Oh boy, ha. Well, each story demands something unique no matter the medium, so I’d have to detail a different process for every project I’ve done up to now, and all that would accomplish is losing you subscribers.

The one thing I always do, speaking very generally, is decide where in their body a character’s tension lives. If I can locate where and what they are holding onto, it puts me into their physical experience of the world, and that generates all sorts of discoveries.

I love the rehearsal room, the crafting and figuring that goes into each tale. I love being in charge of delivering so many of those elements anew every night onstage, in a theatre full of enthusiasts experiencing it firsthand in real time. I also love being more of a witness to all the moving parts on a film/tv set, and the honing of the thing bit by bit, imagining every tweak along the way done by dozens and dozens of dedicated persons, all for one final exhalation into the world. Whatever the case, it takes a village, and villages are challenging, which is often what makes them so satisfying. 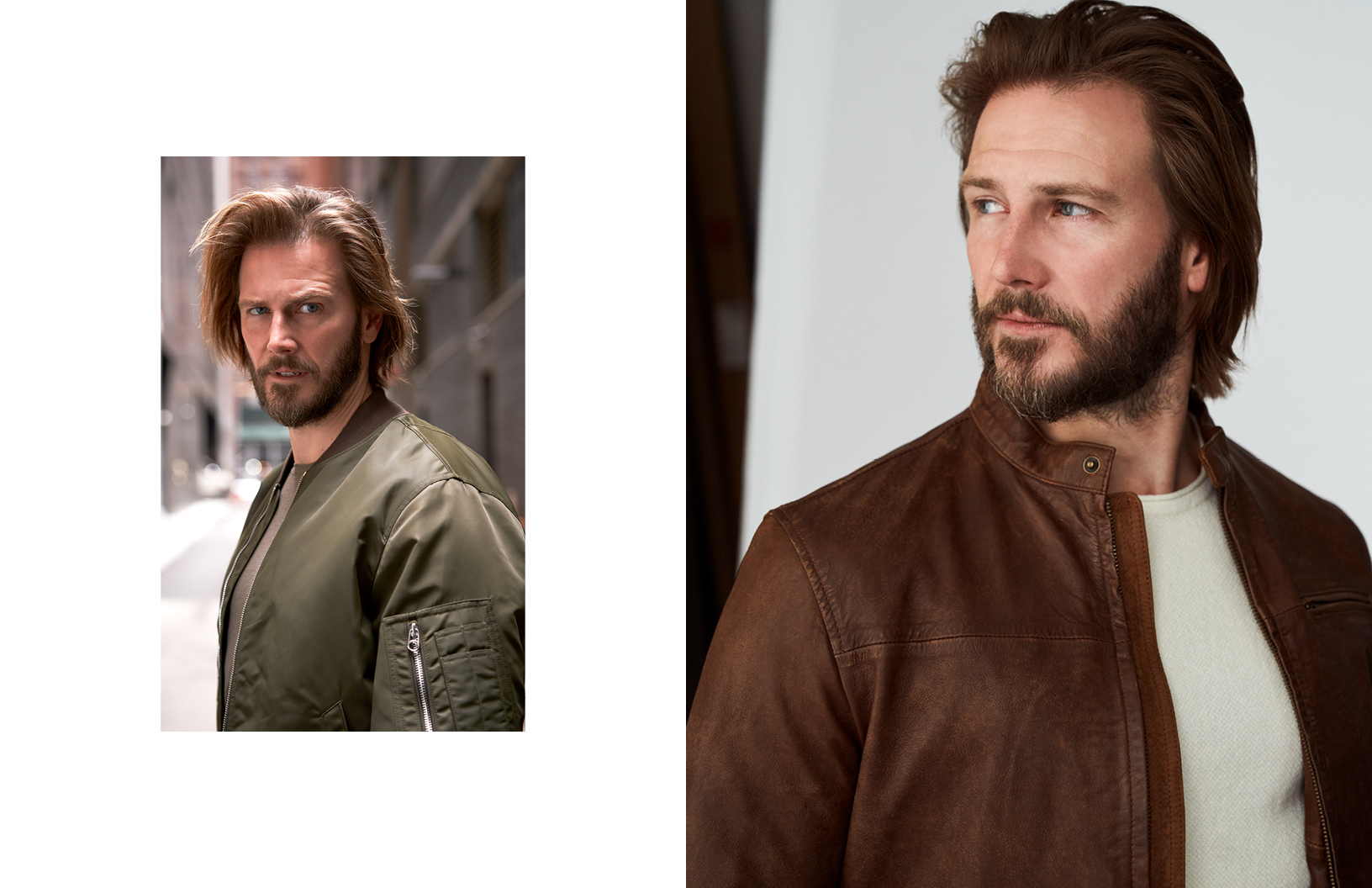 When you aren’t acting, how do you spend your time?

Since the pandemic began, I like to crawl under a blanket in the dark, assume the fetal position and pummel my face with baked goods until the weeping stops.

But really, I like to hang with the family. Little adventures everywhere, big ones where we can. I coach soccer. I survived on carpentry in early adulthood… We just moved, and I’m looking forward to reigniting those skills in the new place. Eventually gonna finish getting my skydiving certification, I swear to god. Oh, and the baked goods thing is real — I don’t like to brag, but I make a fucking phenomenal chocolate chip cookie.

What other upcoming projects are you working on?

Early next year we should finally be able to finish shooting season one of The Old Man, a series for FX on Hulu, in which Jeff Bridges and I share a role in different eras. It’s a spy thriller/family drama, I think it’s got serious legs. Also excited about the Ray Donovan finale film coming out early next year, in which I play a younger version of Jon Voight’s character. Truly an amazing team on that show. And in keeping with this inexplicable trend toward icons from the 70s and 80s, I’ll be playing a young Warren Beatty for an Audible/Vice series podcast with Rachel Brosnahan called The Miranda Obsession. There’s also a gem of an indie that’s been killing it on the festival circuit for the last year titled Small Town Wisconsin. It’s dear to my heart, and bizarrely what led me to being a part of I Know What You Did Last Summer.

What are you looking forward to in the future? 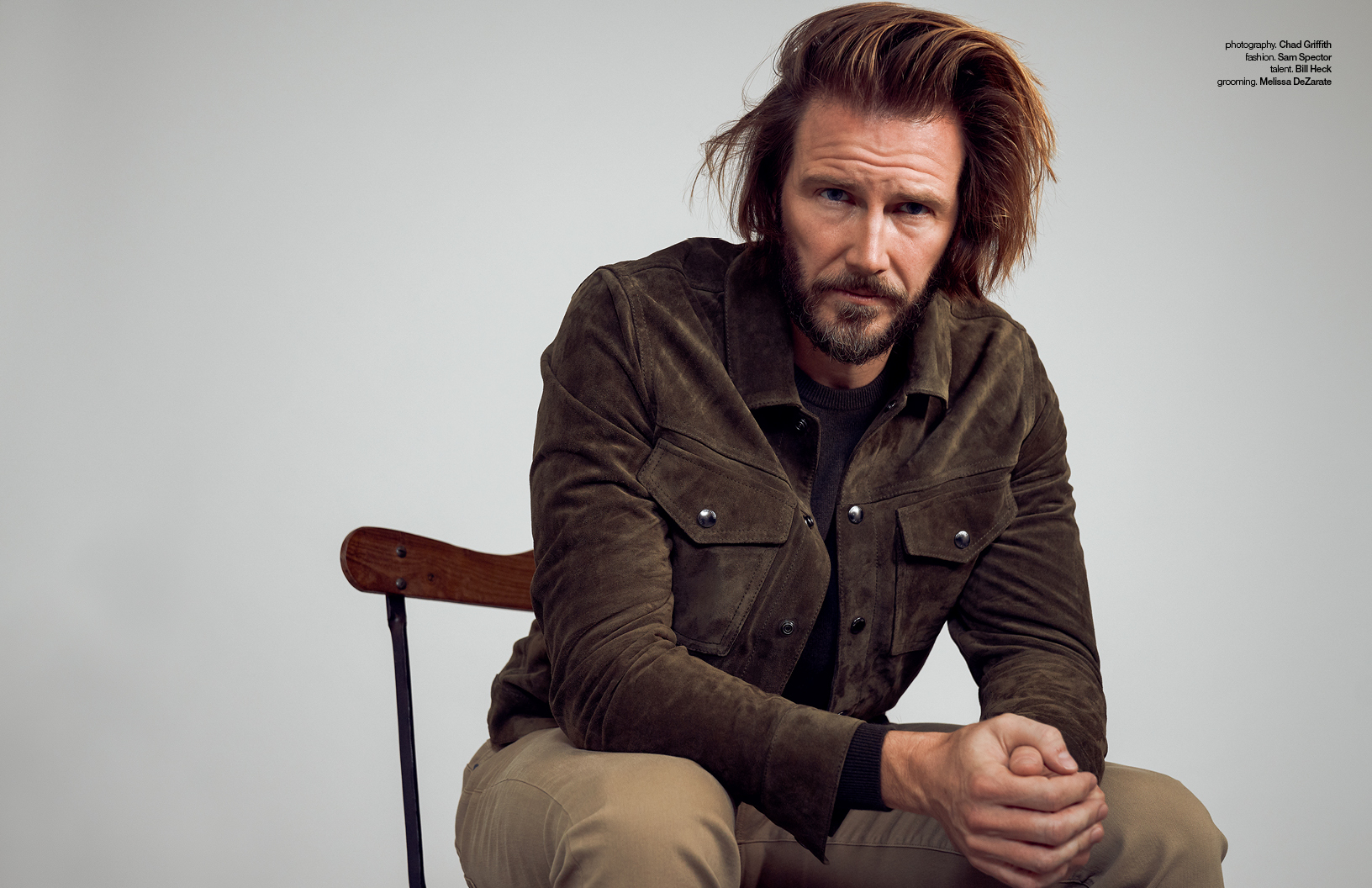 I Know What You Did Last Summer is currently streaming on Amazon Prime Video.