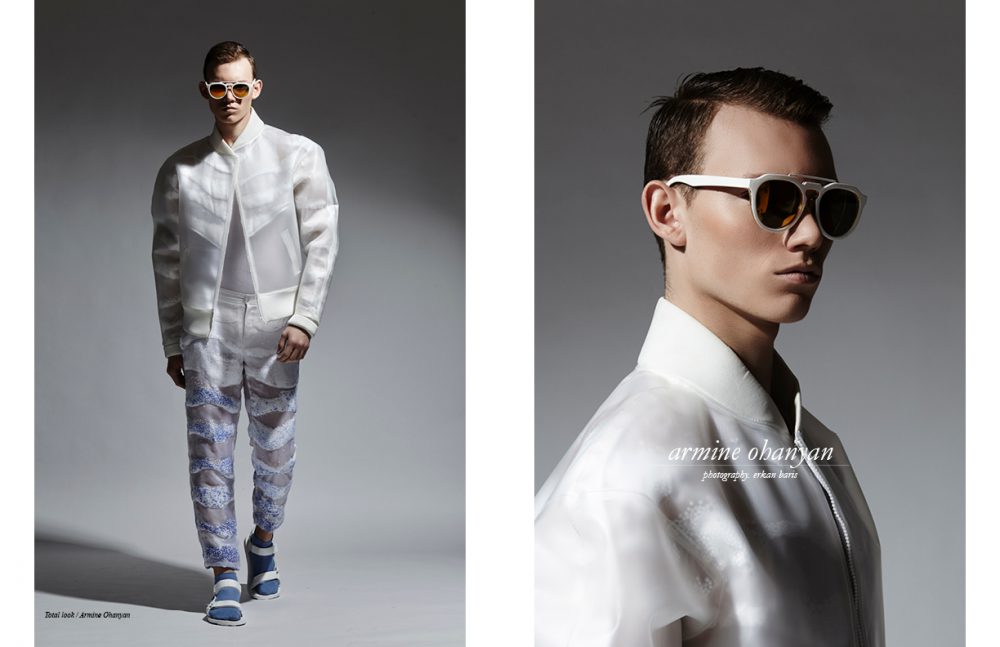 Bridging the creative gap between fashion and nature, Armine Ohanyan is the Armenia-born designer bringing design back into an artistic dimension, through material research and an analytical approach. A fervent student of the plastic arts, Ohanyan developed a multicultural approach to creation. Now, in 2016, DIMENSION is the designer’s collection stepping forward into a bright future. Sitting down with Schön!, Ohanyan relates how a post-Soviet youth and a culturally-rich upbringing crafted a unique worldview.

What were your key sources of inspiration for this collection?

The main source of inspiration was Nature, and the effects of the climate. Each cycle of nature has its colour palette, its smell and a particular rhythm. For this collection, I immersed myself in the depth of winter, a moment when everything is on hold. I believe another natural dimension exists that society hasn’t yet been able to discover. It’s our future!

The fabrics in this collection play something of a starring role: how did you go about selecting them?

I was looking for textiles that could introduce an element of snow and ice through their transparency, colours and characteristics. For this, I chose non-standard textiles such as transparent PVC, silk organza, neoprene and 3D mesh. Through this manipulation of materials that move at the very inside of the item of clothing, I wanted to highlight movement and transition… nothing is static, ultimately. 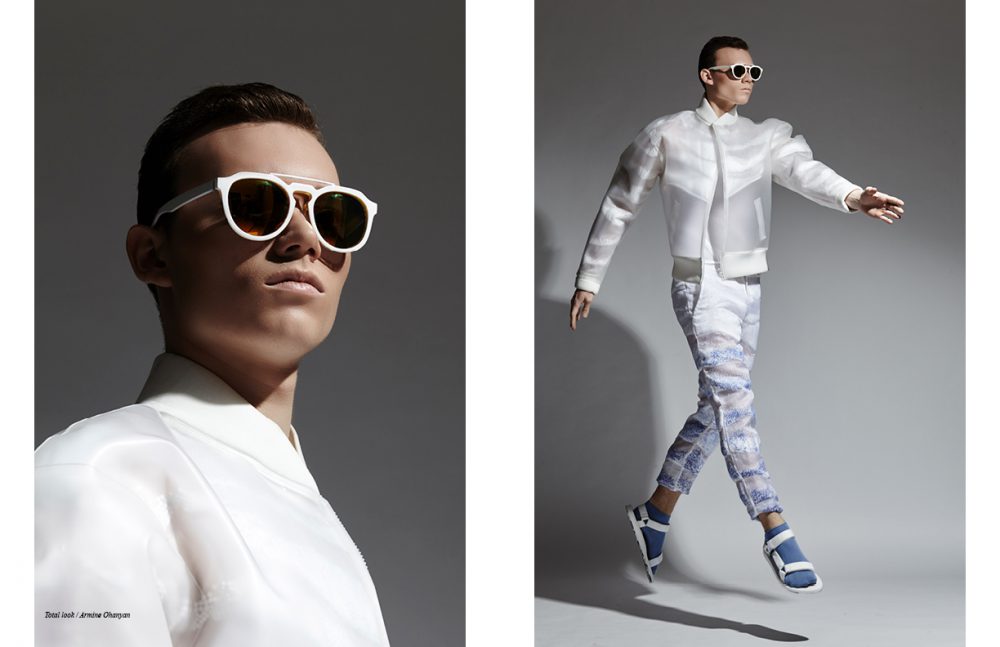 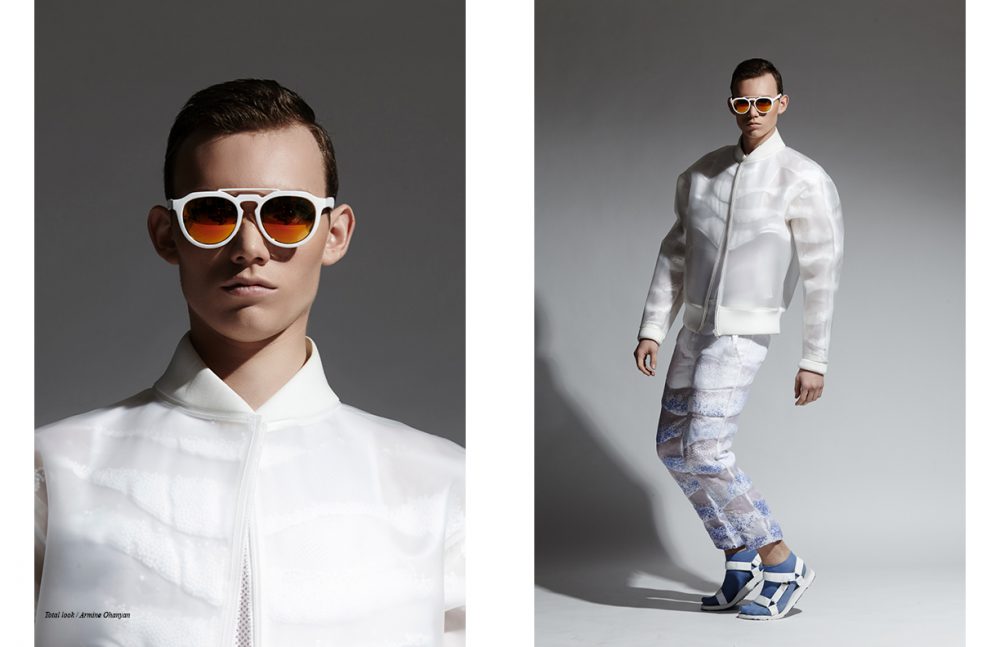 You’ve spoken about your combined love of art and fashion. Which artists, if any, have influenced your designs?

This season I took inspiration from art installations; a branch of art that I’m fascinated by. Japanese artists Kohei Nawa and Odani Motohiko, as well as the giant sculptures of David Altmedj influence me massively.

How would you describe the transition of growing up in Armenia, and then later moving to Paris?

Armenia is a country that is still developing – one that was declared independent when the USSR disintegrated. The history of the country is very rich because of its culture and religion. Growing up surrounded by this weighty history is an unfathomable wealth that allows me to stay enlightened in a creative world. The transition wasn’t obvious: it meant a change of culture, of language, of lifestyle, of atmosphere, of social codes…

Integrating wasn’t a spontaneous thing. It was a cultural clash, but following that I was able to adapt, grow as an individual, discover another culture and its values. It allowed me to have a multicultural approach to creating.

How would you describe the creative process you undergo before arriving at your final design?

First of all, I work on theme research, on style and art references. Material work plays an extremely important part in my creations so I start by experimenting with materials in order to find innovative practices. After that, I sketch and I define the colour palette. I work on prints and textile design where needed.

Then comes pattern cutting – I develop patterns either in 2D or on models and carry out several fittings to check my patterns. The final stage is of course the assembly through sewing and the final touches. 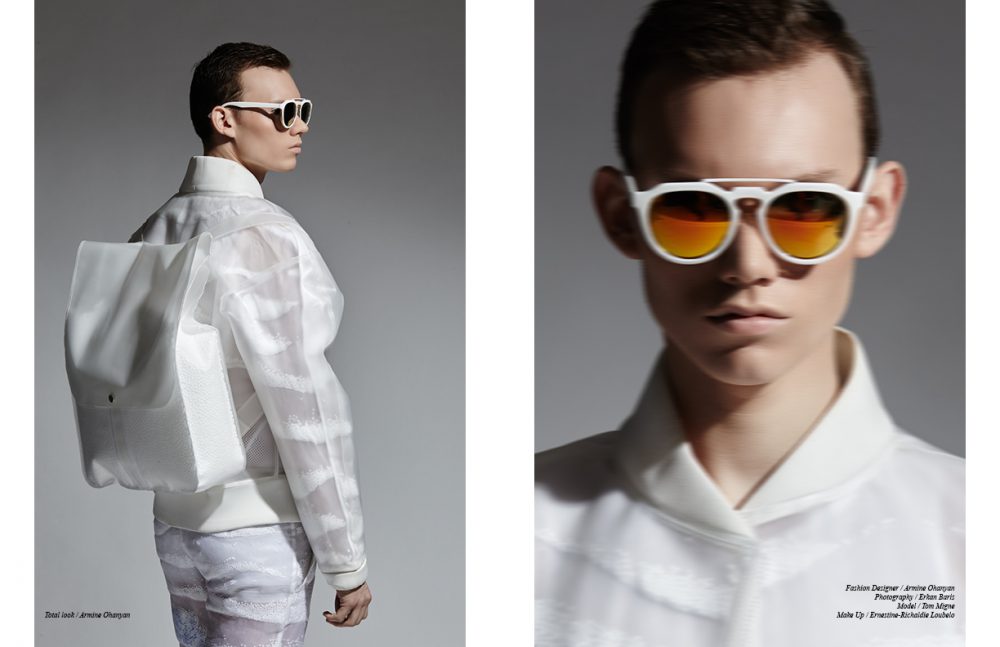 How necessary was your education, both at the Lyon Academy of Fine Art in textiles and the Mode Estah Fashion School, in shaping your approach?

My curriculum was enriching through my teachers’ approach – notably because of the differences between education in Armenia and France. From an art background, it was essential for me to set foot in a fashion school. My belief is that if getting dressed is a necessity, fashion is its art equivalent.

The natural world is a clear theme that runs through your collections. Is this purely for aesthetic purposes, or can a wider message be inferred?

Nature! What a fascinating universe. It represents perfect harmony: there’s really nothing to add. All is balanced. Human kind is its imbalance. I can only be inspired by what envelops me, and largely it comes down to this wonderfully indescribable and mysterious entity. It’s not merely an aesthetic influence; it’s far more than that. It embodies my life philosophy!