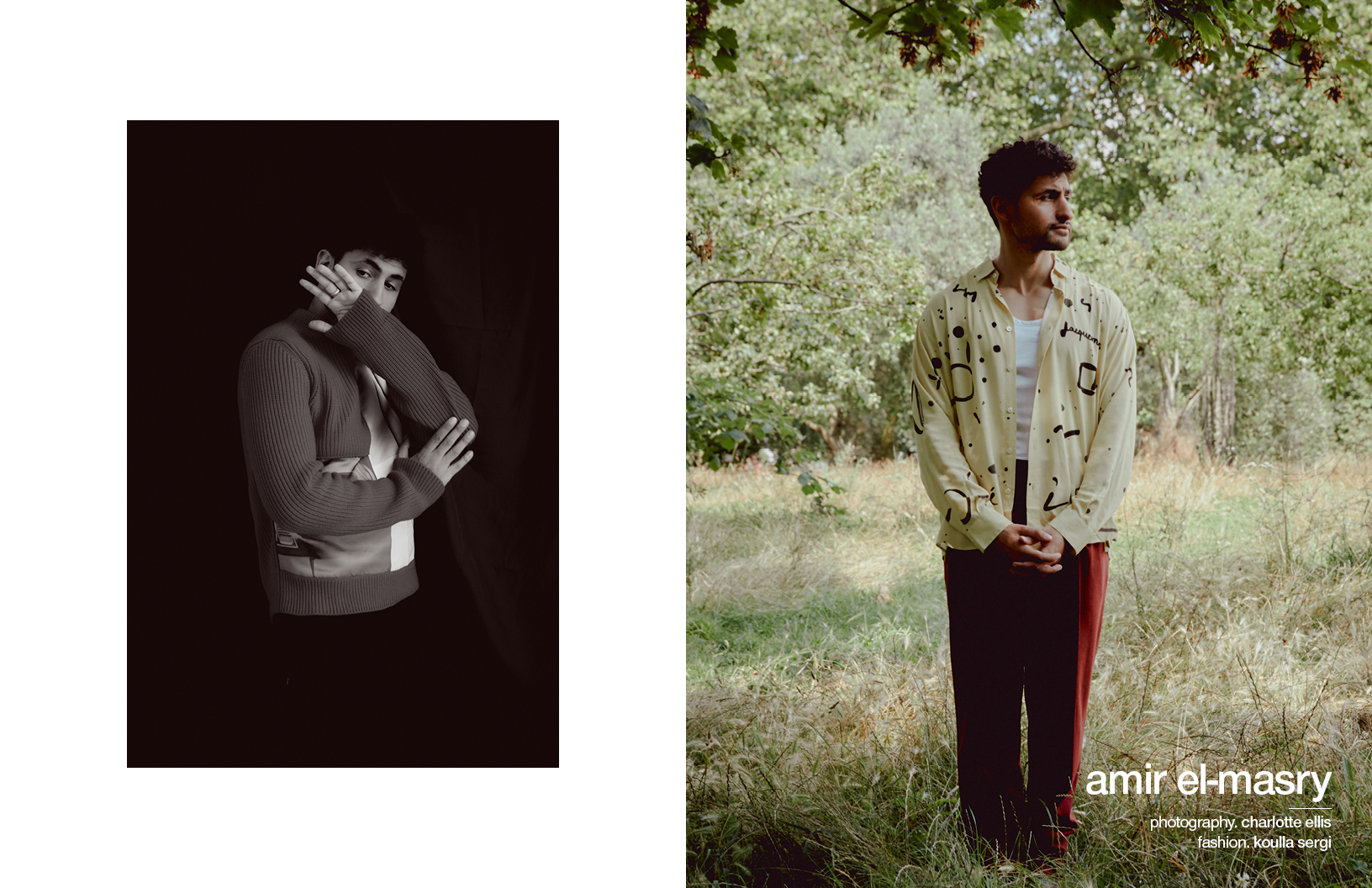 Limbo tells the story of refugees who have been cast to a remote Scottish isle as they await results of their asylum claims. But, as star Amir El-Masry will quickly tell you, the film is about so much more than just that. It’s at once heart-wrenching and comedic, telling its story with a gentle compassion that will stick with viewers long after the film’s end. Schön! sat with El-Masry to discuss Limbo and his career to date.

When did you first hear about Limbo? What was your initial response to the script and characters?

I first heard about Limbo from my agent. We got sent a script from Dan Jackson, the casting director. Initially, when I read the blurb, I was quite tentative because it felt like such a huge responsibility to portray a character who tries to claim asylum. It’s such a current subject matter that I felt needed to be undertaken in a careful manner. More often than not, you see asylum seekers, refugees, portrayed as weak, and that we have to just feel sorry for them, or there’s a white savior character telling the story on their behalf. But [writer/director] Ben Sharrock gives the character so much agency. He’s a Syrian virtuoso, incredibly talented, loves his country to death and wouldn’t want to be anywhere else but home with his family playing music, and we get a feel of his wants and needs — what he loves and what he misses. There’s so much depth and nuance to the character that I just fell in love with. I’ve never laughed and cried from reading a script before; it’s so quirky and bizarre, but also very delicate. Just from reading the script, I could feel the pace — the tone and the style of filmmaking come through.

What were some of Omar’s qualities or details from his story that were important for you to convey through your performance?

Omar is quiet, but he’s not weak. He’s a man who conveys so much emotion inwardly. And it conveys a lot of strength from the inside. He’s not very overt with it; he doesn’t wear his heart on his sleeve. And he’s someone who has been stripped of his identity right off the bat. So he’s quite reserved… It was important to me to portray that stillness, but also show and convey emotion. In terms of performance, we had a little buzzword — “Buster Keaton”. He was the king of showing nothing but conveying everything. That was essential, especially with the tight shots that we had on set; sometimes the camera would be literally right up to my nose, so I’d have to be very, very, very subtle with how I reacted to what’s going on in the scene. 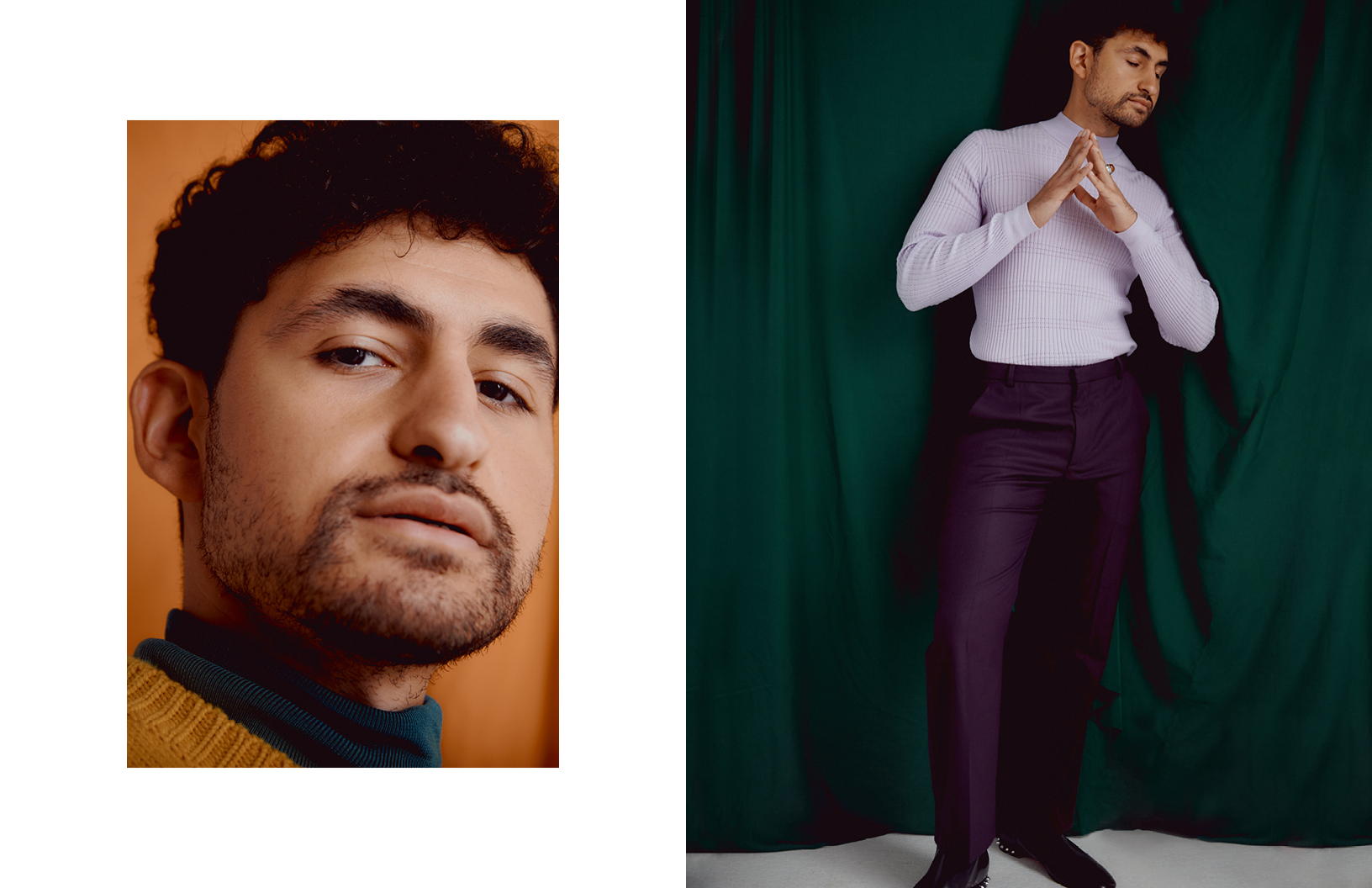 How did you prepare for Limbo?

I did a few things. I had about a month of prep, and so we used a lot of that time researching, finding out about the refugee crisis and sitting down with refugees. In Scotland, we were very lucky to meet people from the UN program. One of the things I noticed — one, the humour. Humour is often used as a way to escape, and in the Middle East, humour is often used as a way to kind of get by. They tend to laugh at their mishaps or their problems, and I felt that was a detail that I needed to portray in Limbo.

Also, the language, the Syrian dialect. I speak Egyptian Arabic fluently, but there was a lot of unwinding to be done, and my dialect coach was incredible — really took me by the hand throughout that process. We managed to try to be as authentic as possible when speaking in spirit in Syrian Arabic.

With the music, though — it’s not like playing a guitar… It takes about seven years to master, and we only had about two months. I had two incredible teachers — I’d be practicing every day with them, and sometimes over Skype, we would just riff together. There were days where I’d be pulling my hair out and going, ‘this isn’t gonna work!’ But [my teachers] got me through it and managed to cover at least the shell of the piece. I owe it to them that we look very, very, very, very good. Also, the weather. We had two weeks of rehearsals, primarily because the weather there is so windy. We had gale force winds there, and it was incredibly cold. So sometimes, you only had one or two takes to kind of get it done and get it in the can before pieces of equipment would fly off.

I think I’ve learned a lot of patience. I’ve learned that you’re not owed anything… And I think also, just the fact that people went beyond their job descriptions to get this film made. You probably hear this a lot from film sets, but there was an immense amount of camaraderie on set, and people going beyond what they were supposed to do in order to make this film, in order to help on set. Like I said before, the weather conditions were not helpful whatsoever. But despite that, people went above and beyond, holding down pieces of equipment to make sure it doesn’t fly off. And people were very, very receptive to the type of film that we were trying to make over there as well. The locals were so, so friendly; they also wanted to help out.

Also that, if you lead with love, the world will be a better place. It’s a film that shows a man who just wants to be back home with his family. He doesn’t want to take up anyone’s space or anything for any other reason other than just wanting to be safe, and wanting his family to be safe. I think the fact that it can be told, from this scope, as a comedy and a drama, I think that’s much more potent. Some people feel somewhat alienated from a different culture if they can’t relate to anything. But with Omar, I feel like there are a lot of relatable factors that anyone from any country can take and mirror in their own lives in some way. 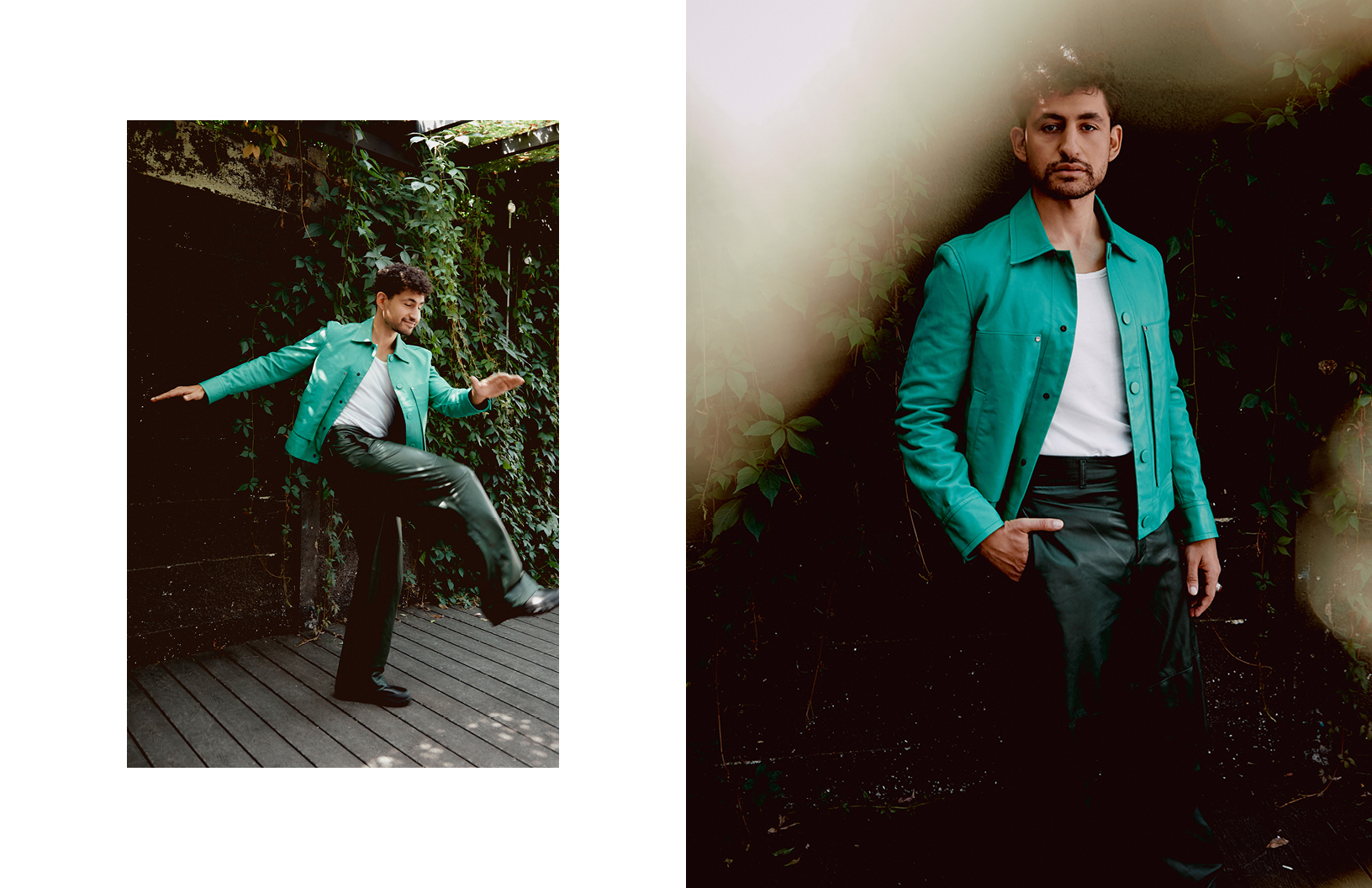 What discussion or message do you hope this film will encourage viewers to have?

Well, honestly, it feels like life imitating art. We did this film about two years ago, and yet we’re hearing in the news that refugees are potentially being placed on an island. It’s crazy to just even think that it’s 2021, and yet, we still have to treat individuals as if they’re not human beings — as if the shoe was on the other foot, we wouldn’t want to be given a helping hand or to be welcomed. I do feel like I said before, but you come out of this film and you feel, ‘Actually, you know what? All these circumstances are not so far off from mine.’ You know, I’ve been in moments in my life where I felt isolated, or where I felt a loss of identity of who I was…

This film, it’s not just about the refugee crisis. It’s not a film about refugees. It’s about human beings who have managed to band together through love, through a feeling of a state of limbo — the state of feeling that they are stranded. Even in our day to day, like I said, you can feel that. I really do hope that anybody who is foreign to this subject matter will now have a better understanding.

What are some projects you’d like to explore in the future?

I just love to work with exciting filmmakers and play the everyday man — someone who loves and fears, and has wants and needs. I’ve been working in this industry since I left drama school in 2013. And throughout my career in the UK, I’ve often been boxed in as someone who can be British, but is of a certain background. I feel, sometimes, you just want to play the everyday man, just the guy. We don’t know where he’s from, or he’s just from here and we don’t need to ask any questions about it. It’s actually sometimes a privilege to just be someone and no one — to have no reference to where you’re from. I’d quite like to play someone who just has everyday, human struggles.

On a side note, I’d love to tap into genres that I haven’t necessarily done: romantic comedies, romantic dramas, more action-led productions, as well. Having said that, I’m very, very happy with all my projects, and I’m immensely proud of all the projects I’ve done. And most of my characters have been incredibly rich and nuanced, and allowed me to sink my teeth into them. 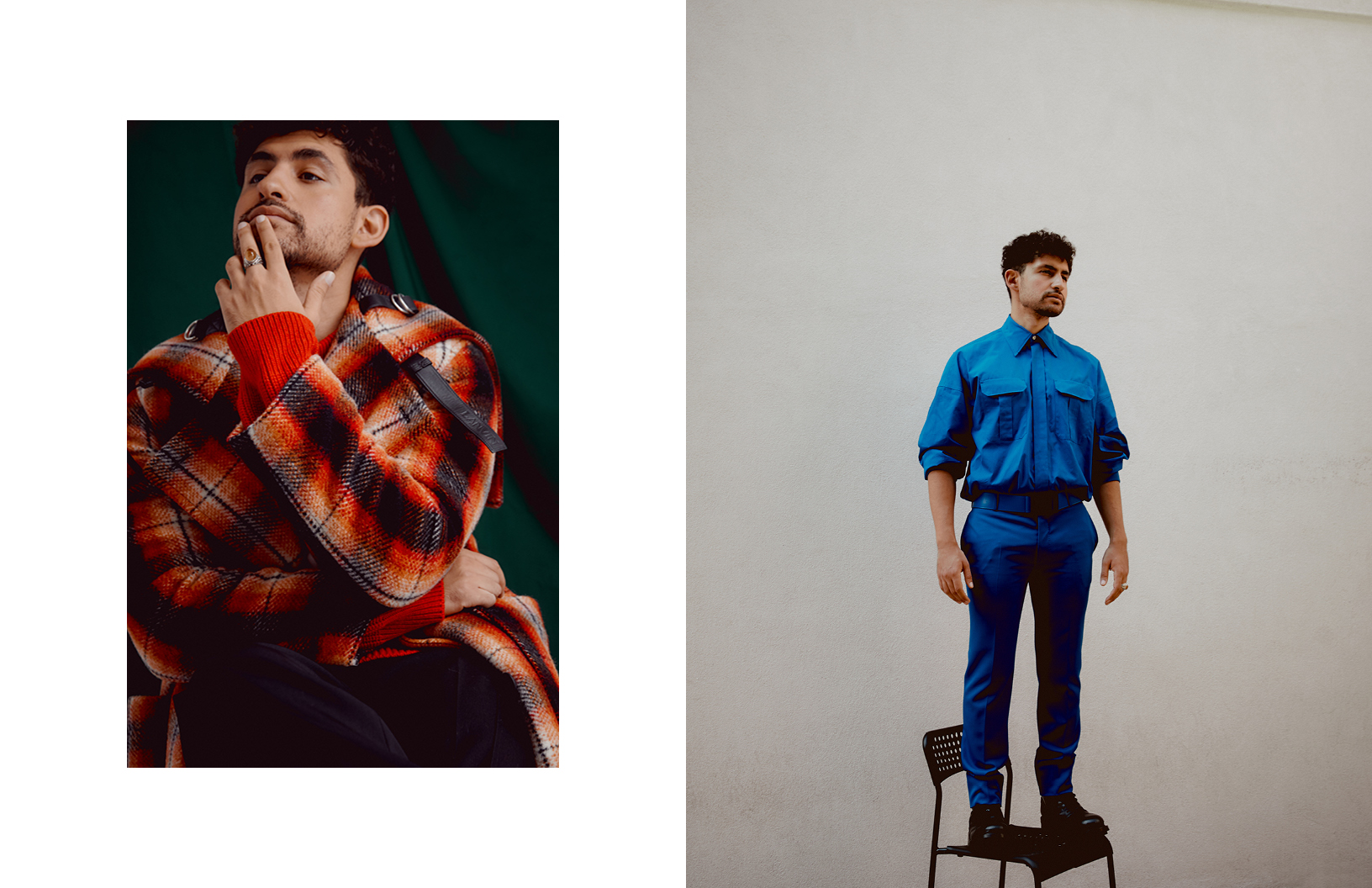 What was your first role that made you fall in love with acting?

The first role that made me fall in love with acting was actually when I played a cat in the Town Musicians of Bremen. I was an incredibly shy, introverted kid growing up in London. I remember my mom taking me to acting classes as a kid — around our area, we had acting workshops… I felt like I could escape and not be myself, and when I adopted other characters in those workshops, I became alive. I felt invigorated. I remember the first time I stepped on that school stage, I felt an immense electricity run through me. When you feel the audience listening to your every word and reacting and feeling something — that was what really gave me the bug, for sure.

What are your upcoming projects that we can look forward to?

I just wrapped on a miniseries called SAS: Rogue Heroes, which will be on the BBC next year. It’s around World War Two, and it’s written by Steven Knight, who penned Peaky Blinders. So that’s really exciting, and I’m looking forward to seeing it myself. There’s that, and I’ve got a reading at the moment — a couple things that should hopefully happen later this year. I’m also writing my own project which has been optioned by a production company in the UK… I’ve co-written this project, a comedy-drama, with a friend of mine from LA, and hopefully, we’ll get it made and it will find a home so you can all watch it. 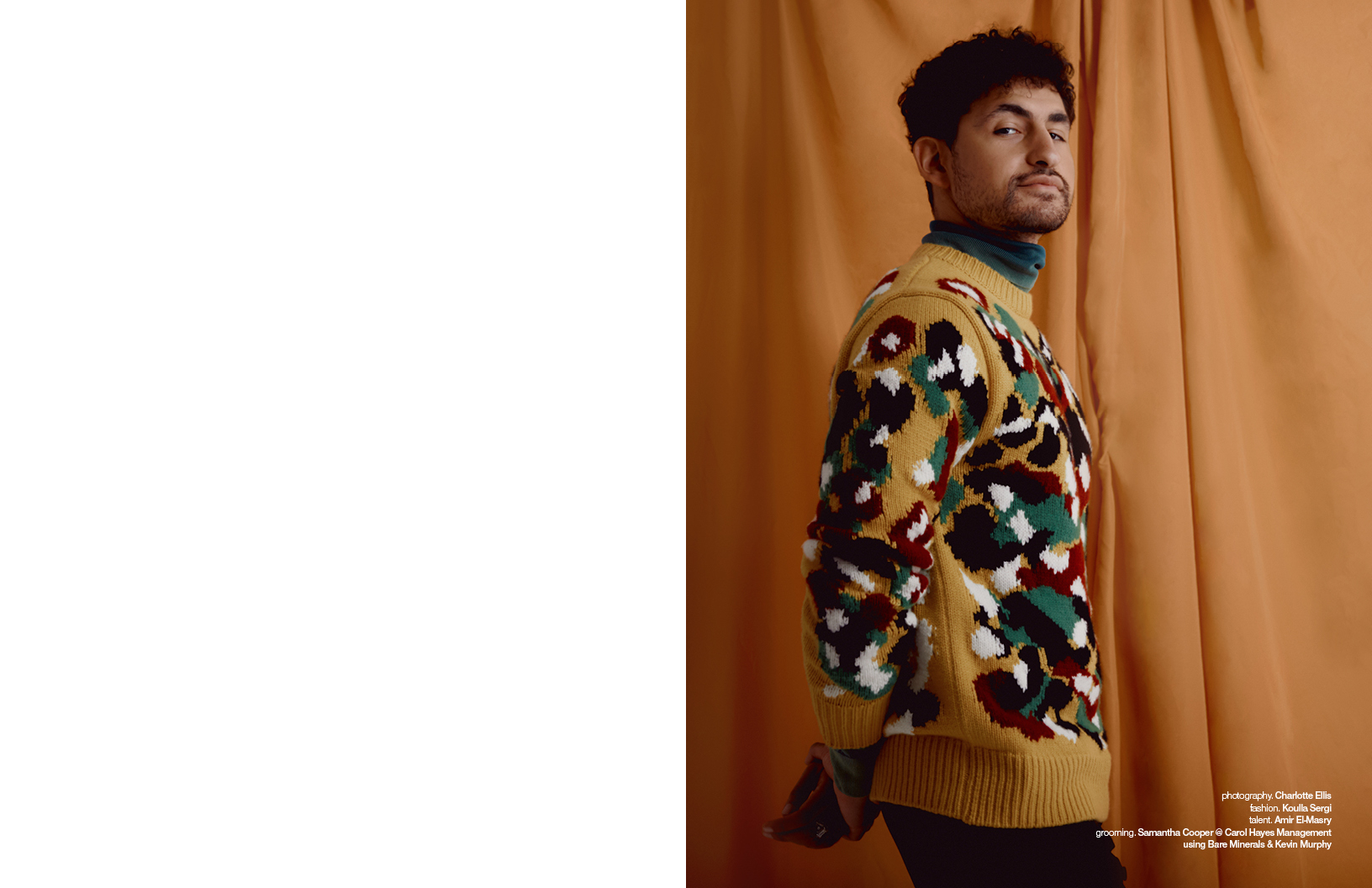 Limbo is out now.