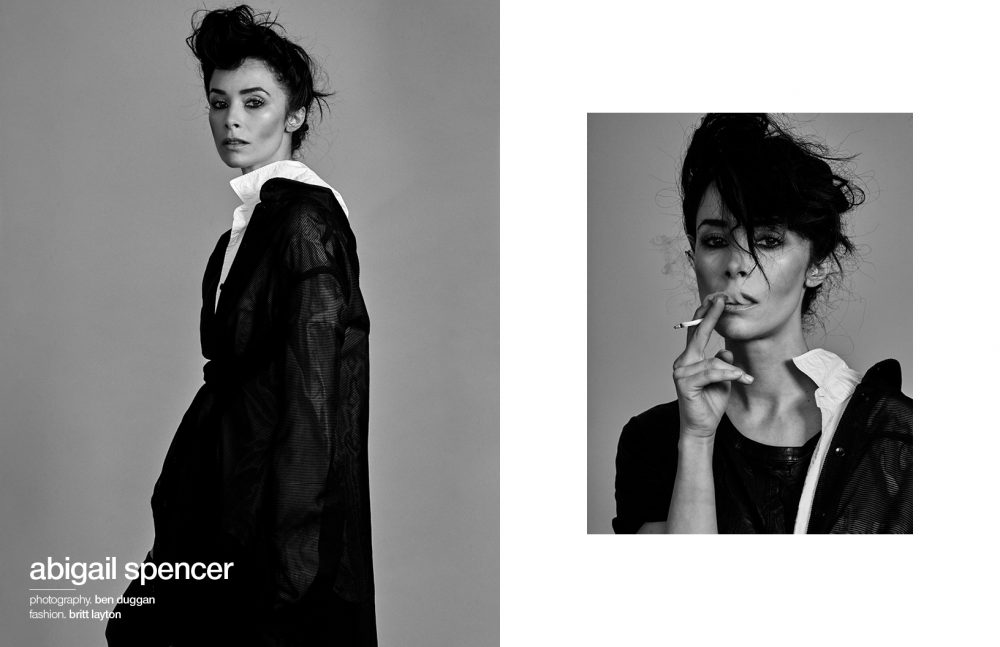 Abigail Spencer is rewriting history, both on and off stage. As Lucy Preston, she has prevented the Hindenburg disaster with her wit and saved Ulysses S. Grant’s life. Yet Spencer’s deeds in real life have proven to be equally glorious: she has proactively faced the male gaze, defied Hollywood’s expectations about motherhood and risen as the epitome of self-determination. From Mad Men and True Detective to Grey’s Anatomy and Rectify: Spencer’s extensive repertoire is a testament to her innate talent and perseverance. With 20 years of brilliant acting under her belt and the second season of Timeless premiering last week after being renewed by popular demand, we caught up with the seasoned actress to chat about the power and poignancy of movements like #TimesUp, TV’s canonical shifts and why she’s stepping off the screen after Timeless.

Timeless is all about changing history, but the fans changed the series’ future with the #RenewTimeless campaign. How did it feel to be renewed for a second season in such way?

I didn’t believe it at first. I thought it was a hoax. “Fake news” if you will. My phone was off and I was fast asleep. I didn’t really know it was real until our showrunner said it was not a joke. It really was tremendous. I have never experienced so much love from fans. I was grateful and I think it helped me realize how much people loved the show and the impact it was having. A lot of gratitude went into Season 2. And I’m grateful to the fans, Bob Greenblatt and Jen Smalle for giving us another shot. 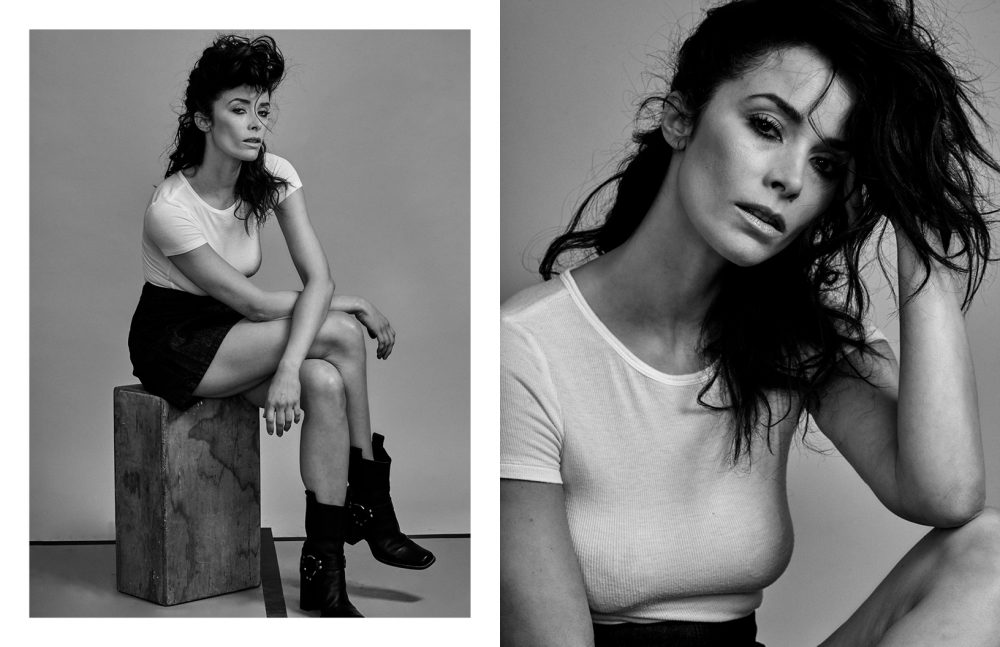 In the trailer, we can see Lucy and Wyatt embracing in a pretty passionate kiss. What can you tease about that going into the season and what are you most excited for fans to see?

For season one, you guys covered multiple events from the 18th, 19th, 20th and 21st century. What events, that you can tell us about, will we see this season?

I’m very proud of this season. We are only going back to explore women in history and people of colour — more of the untold stories. For example, did you know Hedy Lamarr invented WiFi? She called it frequency hopping… we meet her; Robert Johnson, The Godfather of Rock & Roll; Wendell Scott, the first African American NASCAR driver; Alice Paul, the National Women’s Party leader and one of the reasons women can vote; Marie & Irene Currie; Harriet Tubman; we go to the Salem Witch Trials… The historical events we visit are always in an emotional response to what the characters are going through. 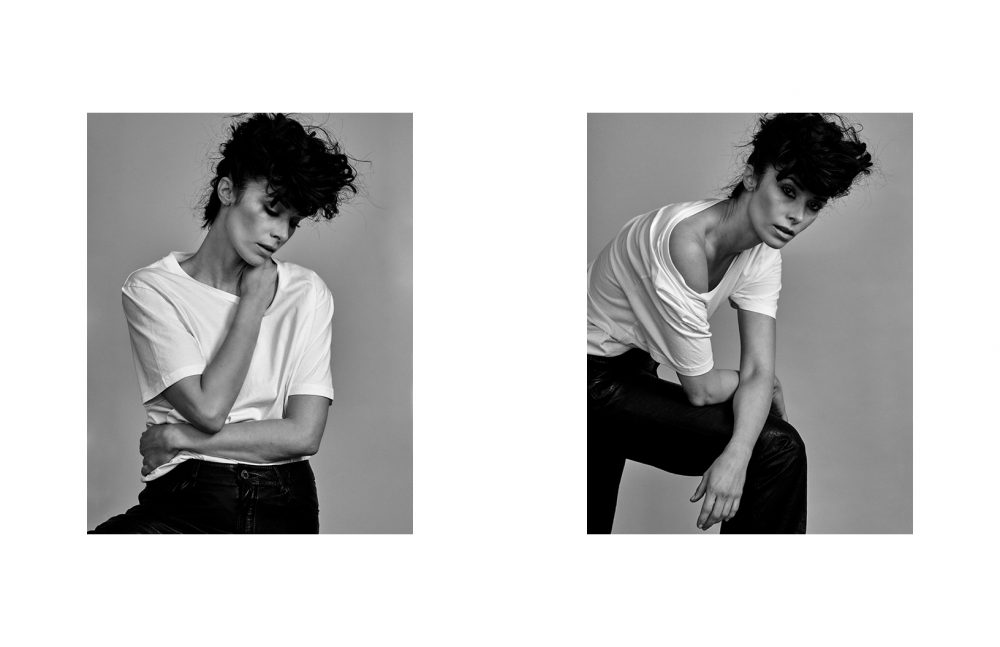 You’re a self-confessed aficionado of the period dresses from the show, what has been your favourite era to immerse yourself into? And, if you could choose one, what era would you live in?

Oh dear! I love them all. But I’ll say I feel quite at home in the ’30s and ’40s. It’s just my time. What can I say? I’m particularly fond of The Philadelphia Story Katharine Hepburn dress Mari-An Ceo created for me in episode 2×03. That one’s incredible. One of my favourite movies and one of my favourite dresses of all time…

Lucy is your first lead on a network show and it’s been discussed multiple times that the role was meant to be yours. What made you drawn to the character in the first place? Do you see any similarities between you and Lucy?

Haha! I don’t always but others do 🙂 I can’t play a character I don’t find myself in it so absolutely. I’m quite convicted and a bit of a nerd myself so I like putting that forward. But I also had been the lead of 7 different network pilots that didn’t get picked up before Mad Men so I knew my way around the Network world, for sure, but I found a home in cable. It suits me. I felt more seem. [With] Lucy and Timeless, Eric and Shawn simply created an opportunity I couldn’t refuse and it just happens to be on a network. It’s definitely a lot of work and a lot of responsibility but it seemed right to come back to Network for this one. 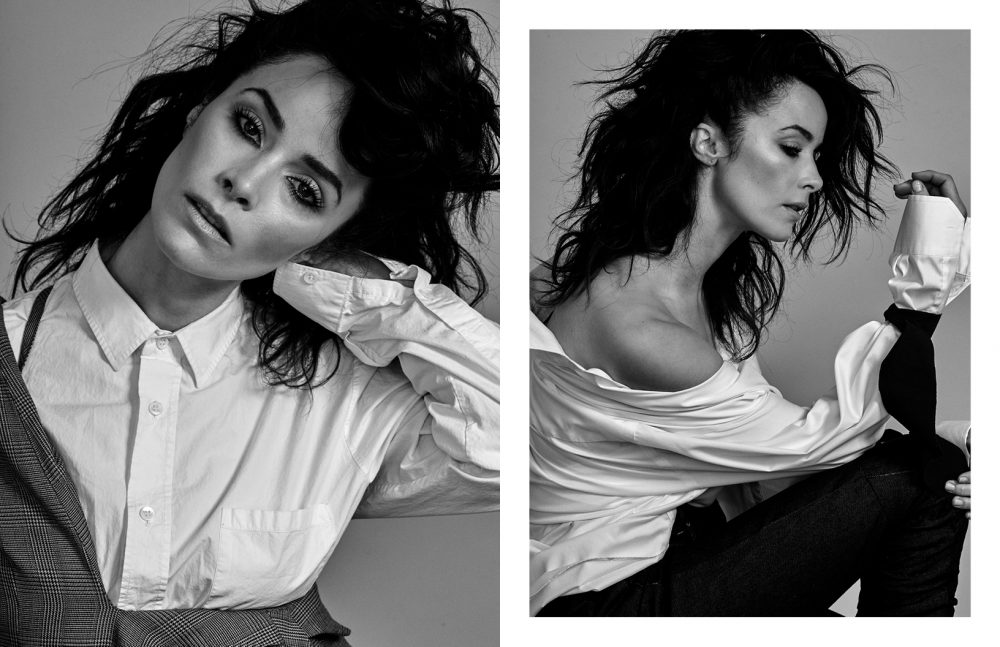 You’ve said that playing her requires “intelligence and a real emotional depth.” As an actor, what are the most challenging aspects of Lucy?

Well, all characters do on every level. Every human is complex. I think it’s just finding that thing in her to key into, something you can ride the wave of the ongoing storytelling. That can anchor but is flexible. I think some of the most challenging aspects are keeping her anchored whilst letting her shift. Also the enormity she’s dealing with is too grand. Too overwhelming. So how to keep the stakes up while keeping her grounded is key, I think. Keeping her human and finding the ways she fails and how she tackles things. Keeping her smart but then thinking she can help Wyatt in a fight with a lamp. It’s the moments in like that and the in-between I like most.

As you mentioned before, you’ve been very earnest about your struggles with failed pilots after having your baby and before landing Mad Men. What made you push through during those times?

Madness. I think I’m just completely mad [about] what I do. It’s an illness of sorts. I have to tell stories. I have to. I started to write and produce and that helped create opportunities so I’m not waiting by the phone and I absolutely love [it]. But it’s a bit of a disease this thing we do and I haven’t found a cure. But I don’t want to be cured so now I’m stuck with it and don’t know how to do anything else so I better take a good crack at it in this life. 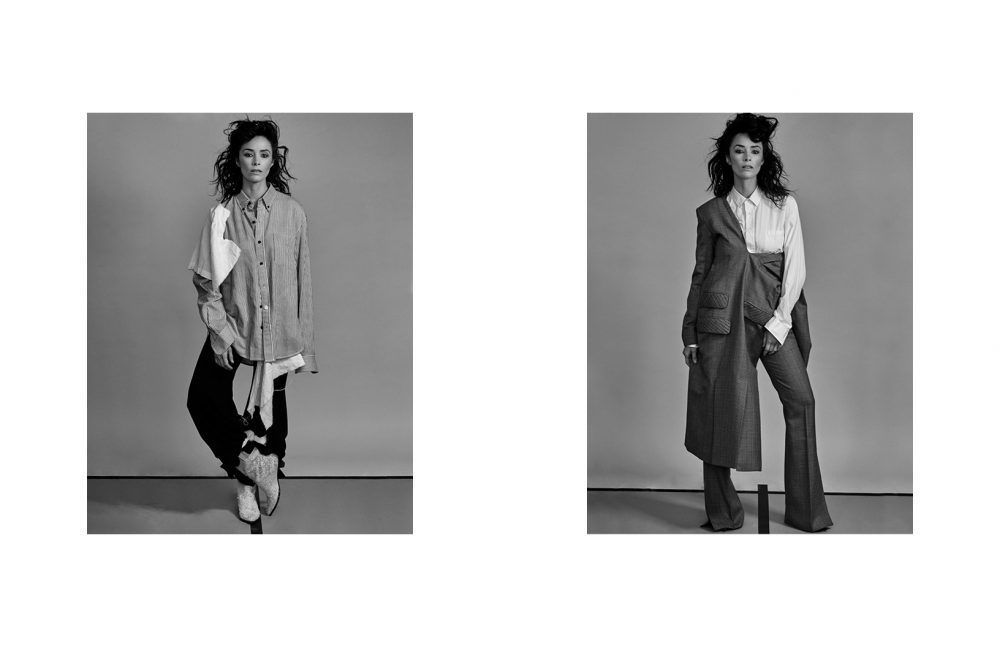 You’ve been part of countless hit show series, but you said your role in Mad Men made you appreciate a more cinematic and literature-focus approach to storytelling. What makes you instantly pick a role? And, in hindsight, what would you say has been your most formative role?

Indeed. I had been acting for almost ten years before Mad Men and it was really the first time anyone saw my work. That was transformative. So by the time that happened I was quite grounded in my work, 10,000 hours and that sort of thing. Suzanne on Mad Men was definitely formative. Like I had dreamed her, and Jon Hamm is an incredible scene partner. But there are other ones too. I played Lennie Rose in an ABC pilot [that] Ken Olin directed and Krista Vernoff created. I think that taught me how to act for the camera and go deeper. They really worked with me. I was 23! I did a one-act play with the Young Playwrights Festival as this really kooky young girl that I loved. But I think Amantha on Rectify really changed my life —personally and professionally. I was in a troupe with some of the most phenomenal actors of our day. It was loving and pure, and Ray McKinnon, the King Cat, saw me. I felt seen. Anytime one feels seen it changes you.

Is it true that you contemplated leaving TV after Rectify? How was the change going from such a small production to NBC’s Timeless?

Not necessarily, I just had been on TV for awhile so you think “ah, I’ll change it up”. Good material is in every medium these days. I think the days of choosing things per medium are over. I’m looking for good material. Good people. To be pushed and stretched. I’ve been writing and producing and after Timeless, I’m going to put my efforts towards that and directing. I feel more needed behind the camera than in front and yes, it was a difficult change. I quite liked my Rectify life, but I’m up for it, and I’ve been acting so long so I’m well versed in production on many levels so I just take it one day at a time and some days are better than others. What I like most about the opportunity is how much I’m learning. I’m learning so much about producing, directing, people, communicating, what they need. I love that. 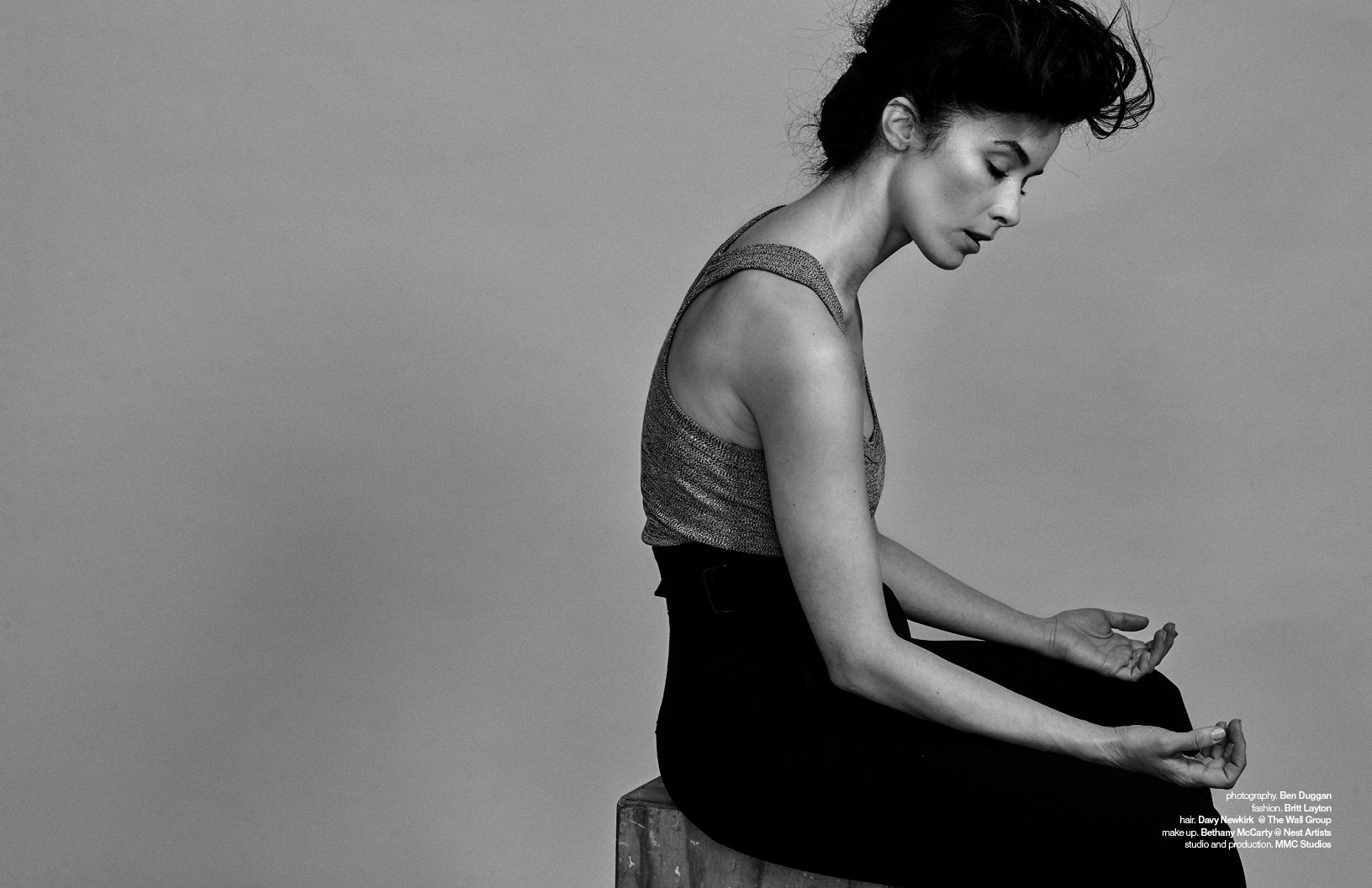 History is being made as we speak with movements such as #TimesUp and #MeToo, which you have wholeheartedly supported on social media. Going forward, how do you think we’d look back at this changing time in Hollywood?

I don’t think we are looking back. We can’t go back. Not yet. It’s only forward. I’ve been so grateful for this movement because I feel I can now continue in the business. I’ve wanted to quit so many times because of the things I saw, felt and avoided. I want to be part of the change. For so long, I’ve felt really lonely or a clanging gong about the absurdities and the inequality in our community. I feel less alone. And I feel tremendous support that true change is on the horizon. The knowledge is here and the light has been shone. We can’t go back to darkness. But I think when we take a moment to review history, we’ll be like: “can you even believe we put up with that shit?”

Lastly, do you have any more projects in the pipeline for 2018?

I do! I’ll be back on Suits this season and I have quite a few projects I’m developing at the moment. Keep your eyes peeled.