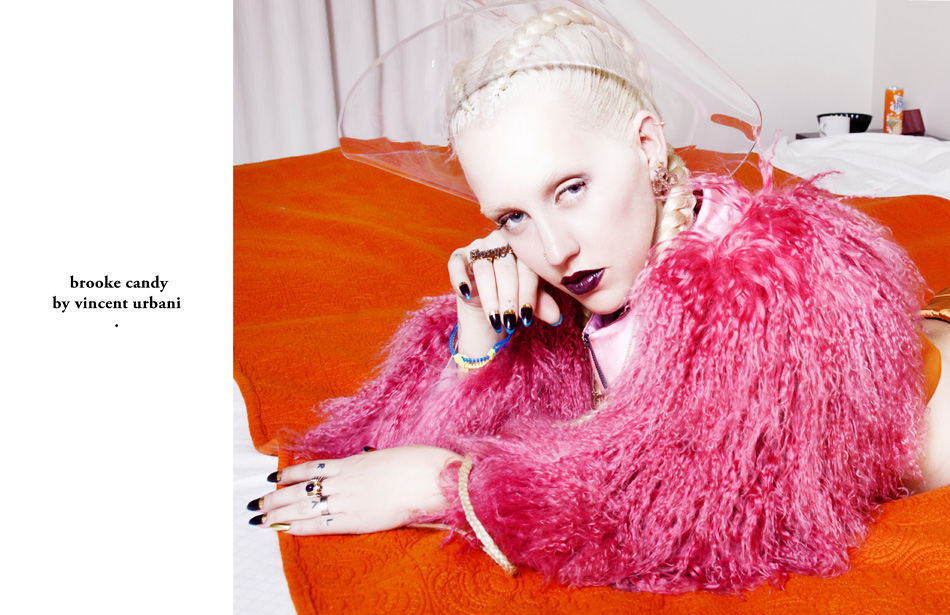 Brooke Candy opens the door of her hotel room and it’s love at first sight. Long blonde braids, pale skin, dark lipstick and an amazing orange and pink outfit. The controversial Californian stripper and rapper is best known for her role in the video for Grimes’ hit single ‘Genesis’ and has also supported Azealia Banks. However, having recently releaesd her third music video, she is being noticed in her own right. These are the photos (and words) of one crazy hour with Candy before her show in Madrid. Get ready because, like she would say, “Everything is so f**king next level in CandyLand”. 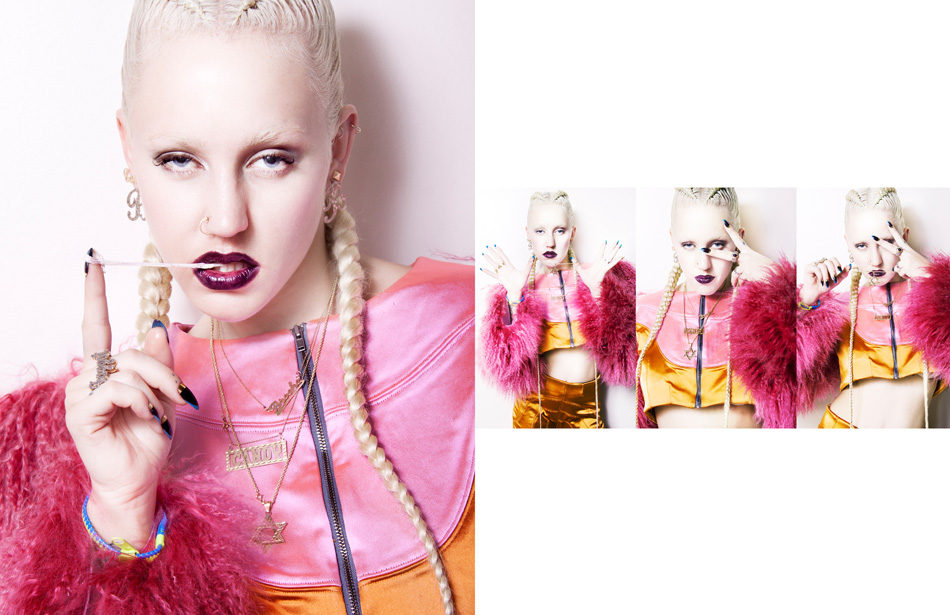 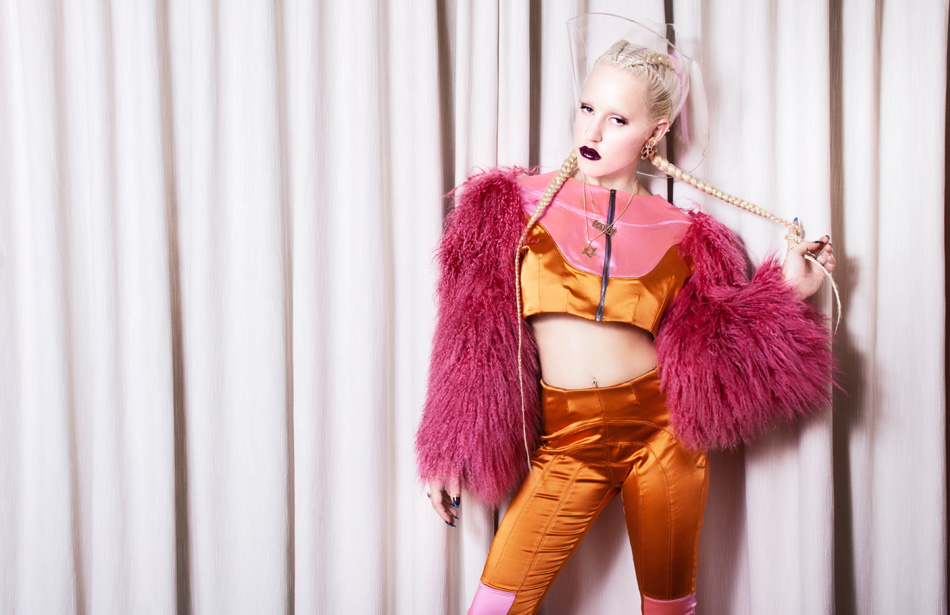 How did you get started in the music industry?

I have always loved rap music. I started rapping as a teenager, not seriously in the beginning, but then, with time I realised that this was what I was good at and that I could help people with my music. I still receive everyday a lot of emails from people telling me, “Thanks for inspiring me. I was bullied and went through very hard times, but now I don’t give a f**k!”

What is Brooke Candy about right now?

Well, right now I’m touring in Europe, and I love to visit my fans out of the United States. I’m travelling a lot, so I can be seen in different countries, perform there and make myself and my music known, spreading the of word of my modern version of feminism. I’m shooting my next video in March, with a very special secret director, very big deal.. but I can’t say anything yet. It’s gonna be amazing!

Lil Kim, for sure – especially in the beginning of her career – because I’m a strong feminist and she has always been that too, kind of without even acknowledging that.
I remember the big scandal of her banned cover of the New York Times where she was wearing nothing but a tiny bikini. She challenged what people thought about feminine and masculine. One of her songs was “suck my d**k”, so…you know. I love her wild style too, her mix of design and trashy.

As a performer I really love Beyonce. She’s just great. She’s modest and polite
and she’s the best on stage and I’d love to be as good as her one day…I have high hopes!

Do you have any fashion icons?

I like old school icons, but I even like Christina Aguilera’s style, in her Dirrty-LaChapelle’s look, with her sweaty body and lots of facial piercings, or Madonna in her Truth or Dare period. Again Lil Kim and Cameron too. I just love rappers’ style.

Did California influence your style and your music?

Well, Los Angeles is very progressive and it’s the entertainment capital but it’s more of a mish-mash than a fashion center. Maybe what affected my style in LA was the weather, since it’s always very hot. That’s why in my first performances I just wore thong bikinis and very sexy outfits. In northern states I couldn’t have done that obviously because of the freezing weather. Maybe if I was born and raised in New York I would have been one of those very serious fashion persons that wear only black everyday. I always think about that.

The videos for ‘Das Me’ and ‘Everybody Does’ are great in direction and very eye-catching in style. Which directors would you like to work with in the future?

I’m actually in talks with Moca, the Museum of Contemporary Art in Los Angeles, and Meredith Danluck, the director of Sebastian Tellier’s ‘Russian Attractions’ video. The clip is a kind of kaleidoscope made with synchronised swimmers and it’s some of the coolest sh*t I’ve ever seen. I would love to work with Peek, who has made a lot of Eminem videos, David La Chapelle and of course Quentin Tarantino too, like one of these very high budget productions, you know? It would be f**king amazing.

What will be your new song?

The title is ‘Feel Yourself’ and it will be a little different from all I’ve done before because it’s a dark pop song and I’m actually singing and not rapping on it. It will be out in March probably and hopefully it will be followed in April by a mixtape I have been preparing that is going to be available online. I don’t wanna wait any longer to release my music. I just want it to be available to everyone to enjoy it. 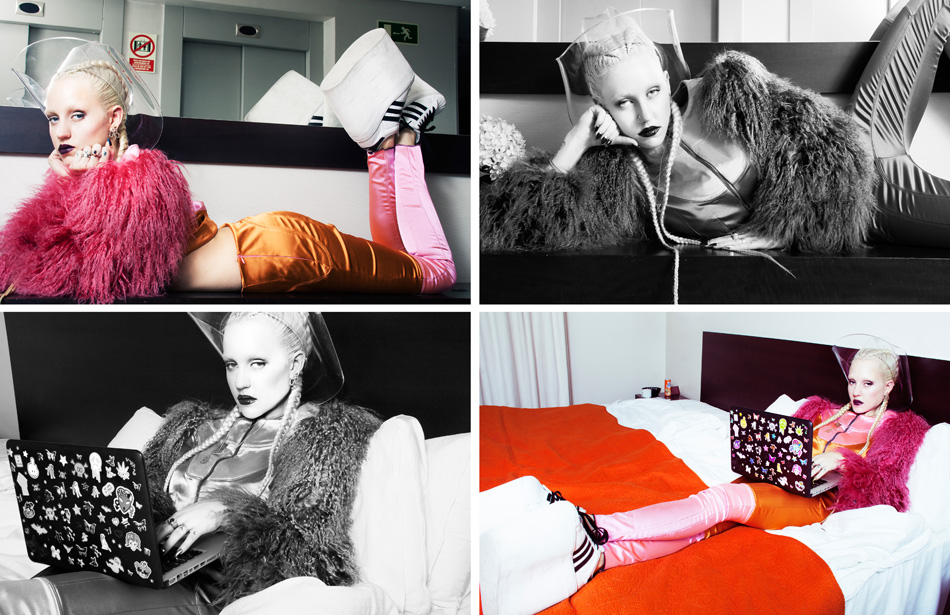 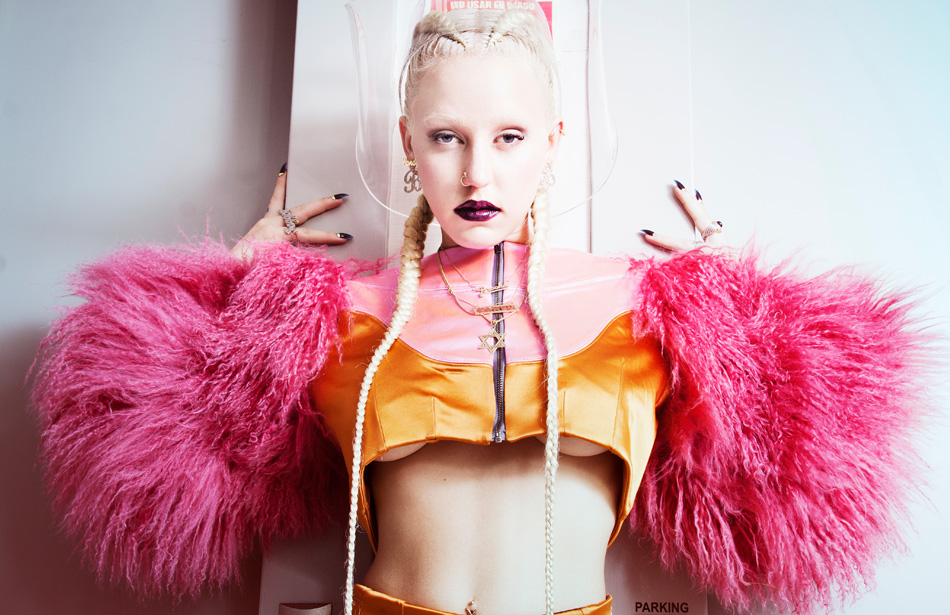