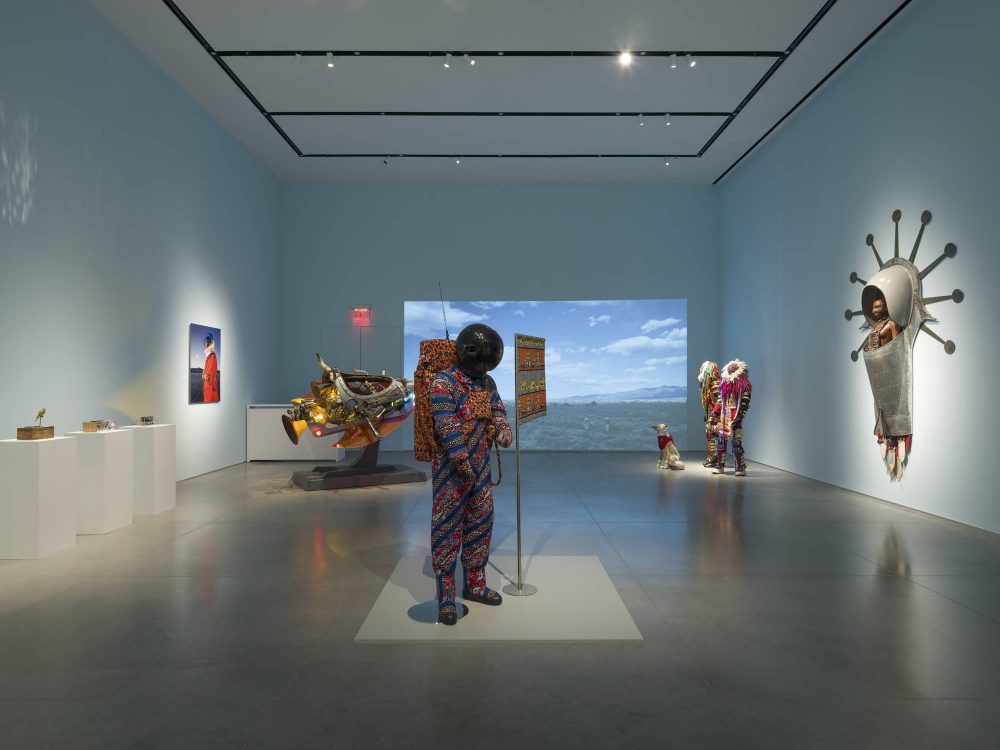 In 1516, Thomas More published Utopia, introducing the term to the broader public. Utopia was More’s idea of a perfect society: world peace, reduced labour hours, a limitation on the riches of the ultra-wealthy and much more. But even in More’s Utopia, all is not equal.

Criminals are made slaves. Class divisions are still pronounced. Relations between genders are decidedly uneven; with women “celebrating” certain holidays by admitting their shortcomings to their husbands. In short, Utopia is a document of its time, blind to issues that would not affect someone like Thomas More, a white Oxford graduate and son of a wealthy barrister.

Today, the idea of a “utopia” must be reconstructed, considering not only the eventual equitability of a society but also the path it took to get there. Utopian Imagination, currently on view at the Ford Foundation Gallery, is a movement toward this goal.

Featuring thirteen artists from around the world curated by Jaishri Abichandani, the artworks are stories of liberation, evoking feelings of freedom, wonder and, naturally, joy. Schön! spoke with Abichandani about building the show and utopias themselves. 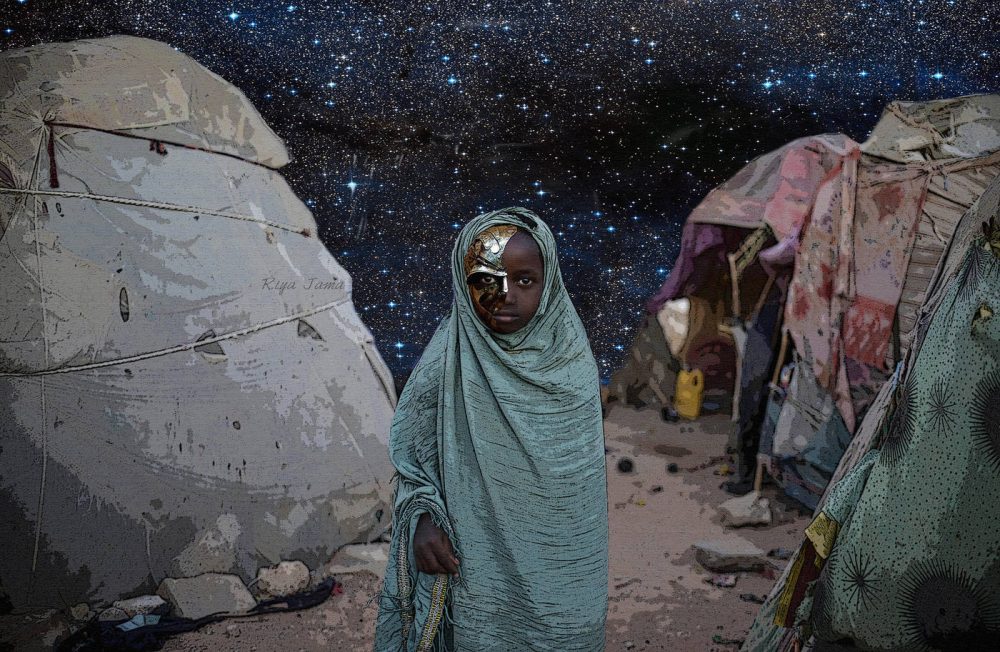 How would you describe the “utopia” envisioned in the works in Utopian Imagination?

The utopia imagined by the artists in the exhibition is full of magic and science. It is led by the knowledge of indigenous elders; it is a future in which queer, brown and black, disabled and feminist bodies find liberation. Whether through the video by Mariko Mori, where she appears as a robot shaman, or the prophecies created by indigenous participants in Beatriz Cortez‘s Fortune Telling Machine, Saks Afridi’s Space Mosque or Future Ancestral Technologies by Cannupa Hanska Luger; we are presenting fictional narratives that include all of us.

A long term fan of Science Fiction, it is the perfect vehicle for this examination of utopias because it belongs to all of us and permeates popular culture, much unlike academic theories on the subject.

I was led by the works of Octavia Butler and Begum Rokeya Sakhawat Hussain in my pursuit of artworks. In a short story penned in 1905, Rokeya Sakhawat Hussain created a feminist utopia in Sultana’s Dream. Within the story, a harmonious matriarchal society is run on the principles of scientists, while men stay home and nurture children. It was this description of an egalitarian world that led me to put together an exhibition that inspires hope, instead of the post-apocalyptic dystopian futures that surround us.

When compiling these works, what were some of the central themes you were looking for to tie the works together?

The metaphor of flight as freedom kept recurring in works. It appears as birds in Beatriz’s Boxes of Wonder. Mariko Mori appears as a futuristic shaman in an airport. A chandelier akin to a spaceship by Lee Bul is echoed in the photos by Saks Afridi and the sculpture Skylark by Zak Ové, while astronauts in those of Lola Flash and Yinka Shonibare, MBE. Celestial beings in space sprinkled in stardust occupy the frame in farxiyo jaamac, Mikael Owunna and Juliana Huxtable’s constructs photographs.

The mining of texts and knowledge of indigenous cultures is present in Firelei Báez, Morehshin Allahyari, Beatriz Cortez, Zak Ové, and Cannupa Hanska Luger’s works foreground how artists are transforming religion and belief systems to prepare for our future. This is particularly evident in Cannupa’s installation. The artist states: “Future Ancestral Technologies does this from an Indigenous lens; it articulates a future narrative in which migration of humans is essential for survival on and with the land and water and people of colour are the primary characters. As the future of our planet is threatened by capitalism’s continued devastation, new strategies of survivance are needed. With global instability, widespread financial crisis and unaffordable housing, our lifestyles must change. Future Ancestral Technologies is an ongoing investigation of our past in order to move forward, advancing new materials and new modes of thinking.”

Do you believe this collection to be escapist, realistic, or somewhere in between?

The more I thought about the metaphor of freedom, the more it started to fall apart. Even though humankind spent millennia in the pursuit of flight, we are now in a situation where the bodies of brown and black people are patrolled around the world, making flying a fraught experience for many.

Even as the prices of flights remain inaccessible for large parts of the world, others fly for leisure without thought to its environmental impact. The awareness of this is growing to the extent that Greta Thunberg sailed across the oceans to fulfil her pledge not to fly. As a species, our addiction to flying — read capitalism — is going to lead us off the metaphoric edge into oblivion.

Given our reality, it seemed that the only way to present a utopia was through the fictions of these artists. The exhibition is meant to be a space of hope, beauty, and inspiration — a respite from the realities of our world. 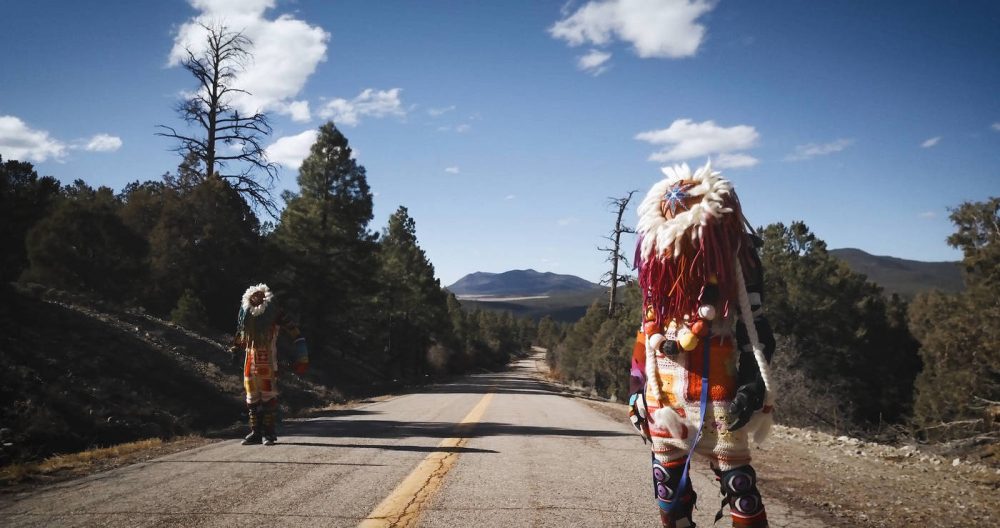 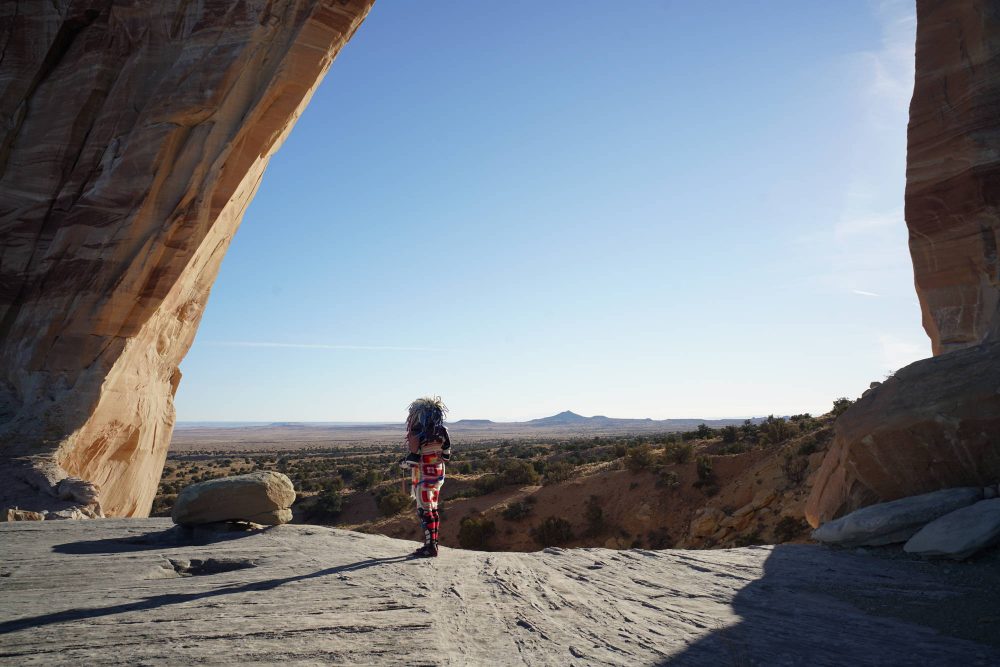 Cannupa Hanska Luger, The One Who Checks & The One Who Balances. Navajo Nation. Photo: Chip Thomas for Return of the Warrior Twins mural, 2018

Why is it important to imagine utopia now?

If not now, then when? We are on the brink of collective extinction. Popular culture, which is completely patriarchal, is offering us little by post-apocalyptic dystopias in the ways of films, television, and books. If we don’t imagine a better future and actively work towards realising it, we will succumb to despair and a faster demise. We can seize the opportunity to transform our societies to a green planet with the same speed that industries spread the internet. It’s possible if we will it into existence.

The press release states that this collection can “inspire hope for our existence.” What about the curation process has inspired a similar hope in you?

Getting to know the minds of such brilliant thinkers has been completely inspirational — we worked with 55 artists in the course of the trilogy spread over this year. Vanessa German, David Antonio Cruz, Thenmozhi Soundararajan, Jasmeen Patheja, Wendy Red Star, Cannupa Hanska Luger, Beatriz Cortez, Saks Afridi, Rashaad Newsome, Firelei Báez, Sue Austin are just some of the folks who are transforming the world with their voices and art. To have been able to work with maestros such as Dread Scott, Faith Ringgold, Thomas Lanigan-Schmidt, Mariko Mori, Lee Bul, Yinka Shonibare, MBE — it’s been a dream come true to for a queer South Asian immigrant woman to be given this platform to unfold my vision.

It’s been completely gratifying to see the response of audiences to the artists and exhibitions. To see that this change is possible in an art world dominated by straight white men has been really amazing. I hope that we have fewer shows that feature solely white artists, or work that entirely relies on esoteric and dry conceptualism.

Is there any specific message you hope audiences take away from Utopian Imagination?

For those in the art world, that it’s possible to create exhibitions that are formally beautiful and rigorous, political, and visceral with no white artists at all. The rest of us have long been engaging in powerful dialogues.

It has been clear that the general public has found the exhibitions very accessible. They have been very receptive as evidenced by the comments that have been left in our sign-in book at the gallery.

The common message for everyone is one of hope and urgency — only by prioritising the voices, art, knowledge and existence of the most disenfranchised amongst us can our children hope to survive. It is in the wisdom of scientists and indigenous people that the solutions will be found, not within the confines of capitalism. It is up to us to restore the planet, right now.

Utopian Imagination is on view at the Ford Foundation Gallery until December 7, 2019. Find out more information here.