Bridging the months of June and July, FASHIONCLASH Festival opened its doors for the 9th edition of its unique event with a theme that tackled the subject Fashion Makes Sense. The 4 day festival showcases the work of over 150 designers and performing artists from more than 25 countries, who all come together to ask us “does fashion make sense to you?”

The festival also goes beyond that to investigate fashion through the lens of our senses and how we make sense of the world around us in a programme consisting of fashion shows, performances, guided tours and fashion talks. The talented trio behind the event explain: “With Fashion Makes Sense we wanted to examine the relationship between fashion and the human body. The playful double meaning of Fashion Makes Sense is also aimed at stimulating designers, the industry and the public to think about the state of the fashion industry.”

Running from 29th June to 2nd July, Schön! was able to join the fashion event on the Saturday with Ebby Port kicking off the shows for the day at the Van Eyck Academy. The presentation also marked the young designers first very own fashion show and the Maastricht-based designer didn’t disappoint. She delighted the audience with interesting silhouettes and eye-catching printed fabrics which first came to fruition in the very place we sat. 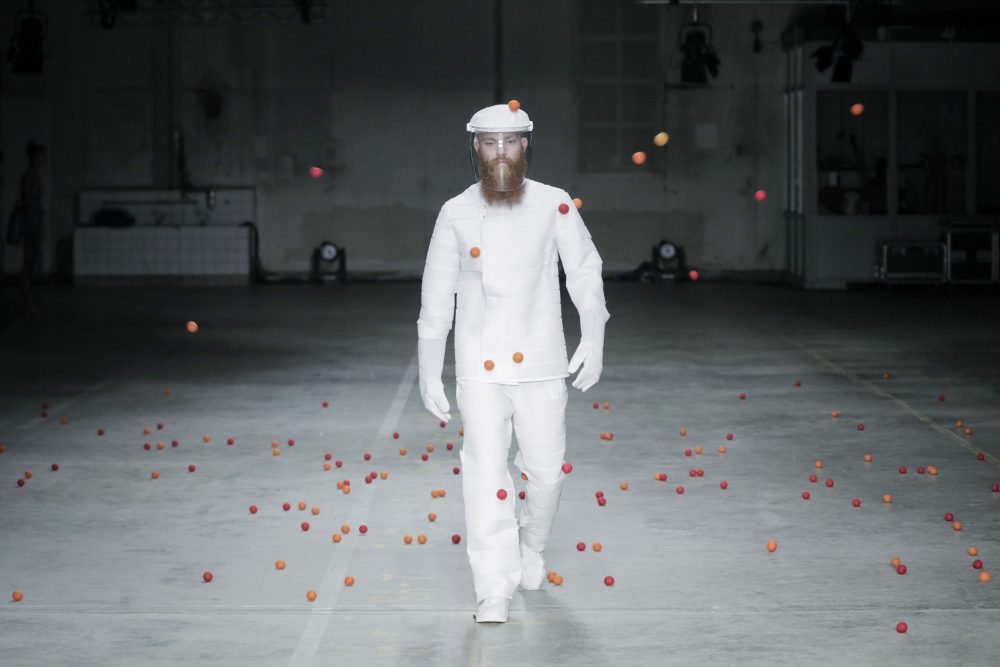 The main venue was the cavernous Sam Decorfabriek, housing both the catwalk shows and the Fashion Makes Sense LAB which consisted of a market and an almost sterile exhibition space mimicking the minimalist space of a science laboratory. A venue fit to probe at our senses with intriguing installations, films and workshops. Sepideh Ahadi had an interesting take on the theme, with an interactive installation (Whisper of fabrics) in which you were blindfolded and made to listen to curated sounds of fabric and construction whilst touching the garment which Ahadi had created with her eyes closed. The experience was as kooky as it sounds but also forced you to interact with fashion in such a unique and charming way. She explains that she wanted to, “create a new collection with completely different value by reconnecting our primitive senses such as touch, smell and hearing but this time without sight.”

The evening saw the catwalk shows start up again with outrageous showings from emerging designers who used the show space in new and interesting ways. Stand out designers included Rita Afonso winner of the Sangue Novo/FASHIONCLASH award which cemented her showing at this year’s festival. The collection, I am a vase, but I scream, stood as homage to “all women in history that had to use their voices and scream for their rights” – Afonso unveiled a delightful collection with a playful nod to the ’90s. As the night drew to a close the Clash Project took centre stage, showcasing 10 young non-fashion designers who were invited to translate their work into a wearable catwalk piece. Due to the not-so-fashion background of the non-fashion designers the finished pieces were refreshing and unconventional, ending with an interactive look that featured a Velcro white suit which the audience were invited to throw felt balls at – a fitting end to a unique set of catwalk shows. The festival ultimately concluded with an award ceremony, including the prestigious FASHIONCLASH Festival 2017 Talent Award. The coveted award went to menswear designer Federico Cina whose show on Friday wowed attendees and judges alike.

The final day of the festival was devoted to a series of Fashion Talks. A day of intriguing discussions centred on fashion and the senses which helped to bring the event to a close by tackling this week’s theme head on. The talks kicked off with an immersive panel moderated by Saskia van Stein entitled Fashion & Senses. It was preceded by a performance piece from panellists Olle Lundin and Floriane Misslin then went on to discuss an array of varied topics, from slow fashion to garments inspired by sensory therapies with fellow panellists Carolyn Mair, the owners of Sensewear and Sepideh Ahadi.

FASHIONCLASH helps to cement Maastricht as a city steadfastly dedicated to nurturing new, exciting talent whilst also connecting fashion and other art disciplines in a thought-provoking way. Next year marks the 10th anniversary of the fashion festival and the FASHIONCLASH team are hoping not only to celebrate the achievements of the festival but to also look “ahead to the world to come.” The 10th edition will see an exploration of the theme Fashion My Religion which will tackle “devotion and spirituality to things that are tactile but also things that are elusive.”

Find out more about FASHIONCLASH here.