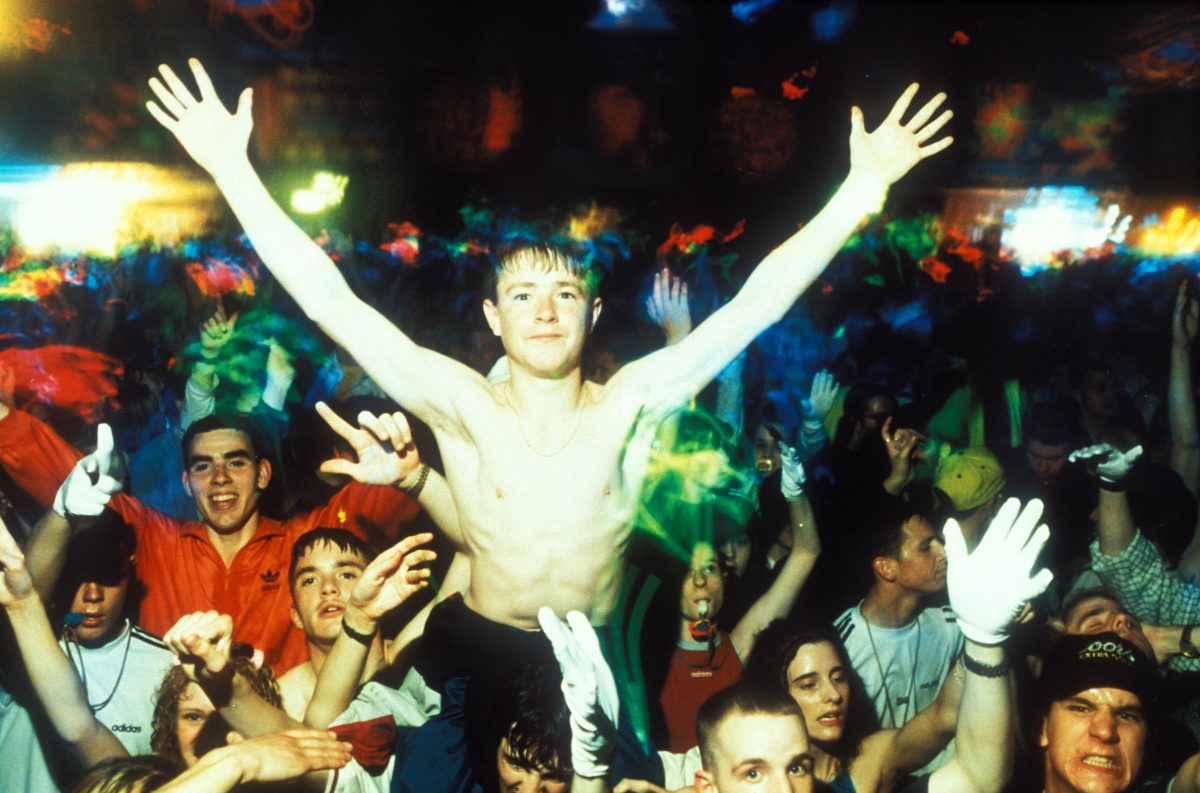 “We want to be free to do what we want to do! And we want to get loaded! And we want to have a good time! That’s what we’re gonna do!” This excerpt from Primal Scream’s 1990 track Loaded introduced Dries Van Noten’s SS22 Men’s collection and heralded a season of baggy slacks, drop-shoulder shirts and neon stripes. What The Guardian coined “dopamine dressing” in 2017 has returned with a vengeance, as cheerful colour-blocking pervades the high street and runways. Junya Watanabe’s scrambled prints and VTMNTS’ bold graphics reprise the euphoric ensembles worn by nocturnal misfits who raged to techno tunes and sweated liquid ecstasy. 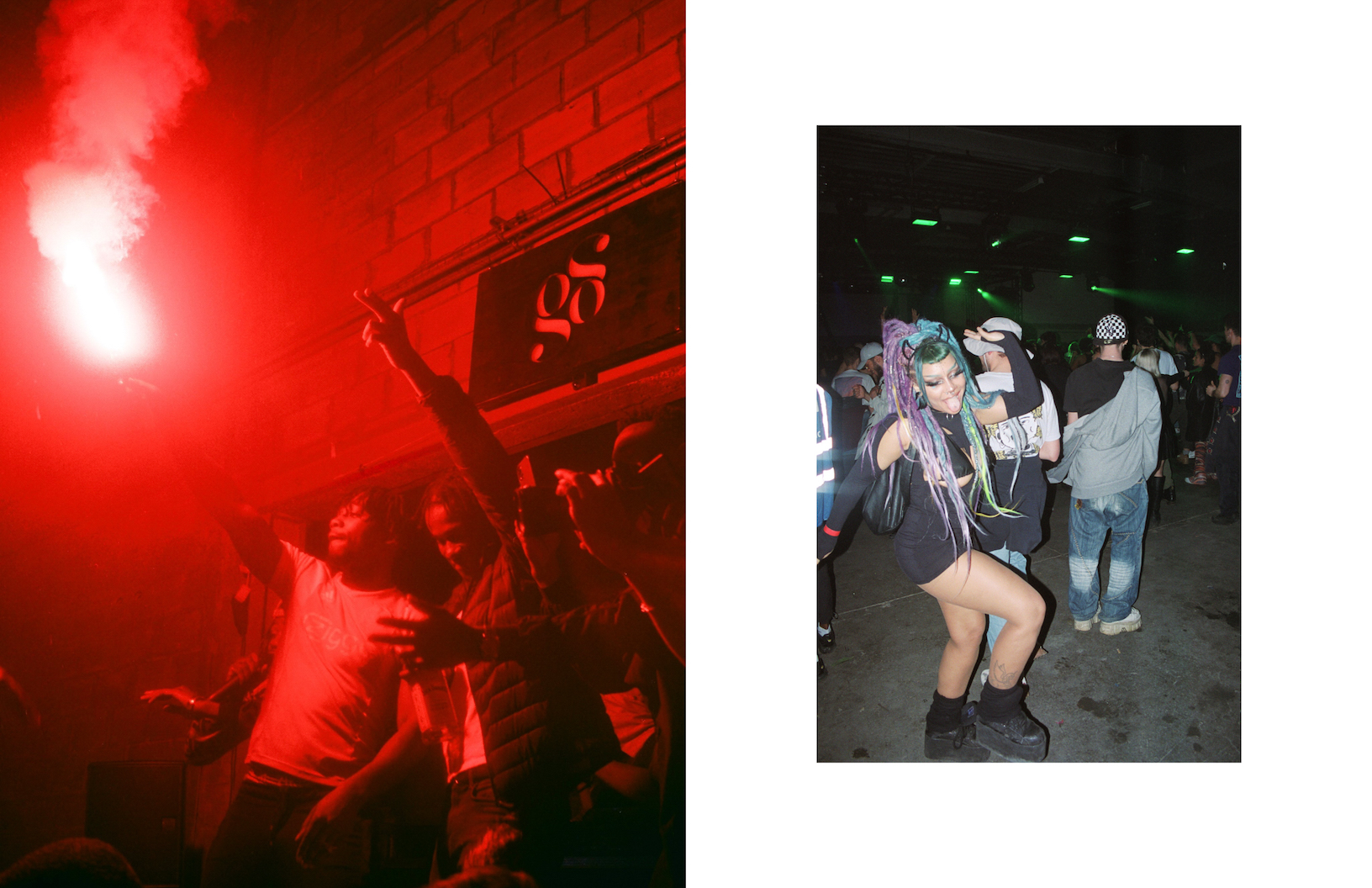 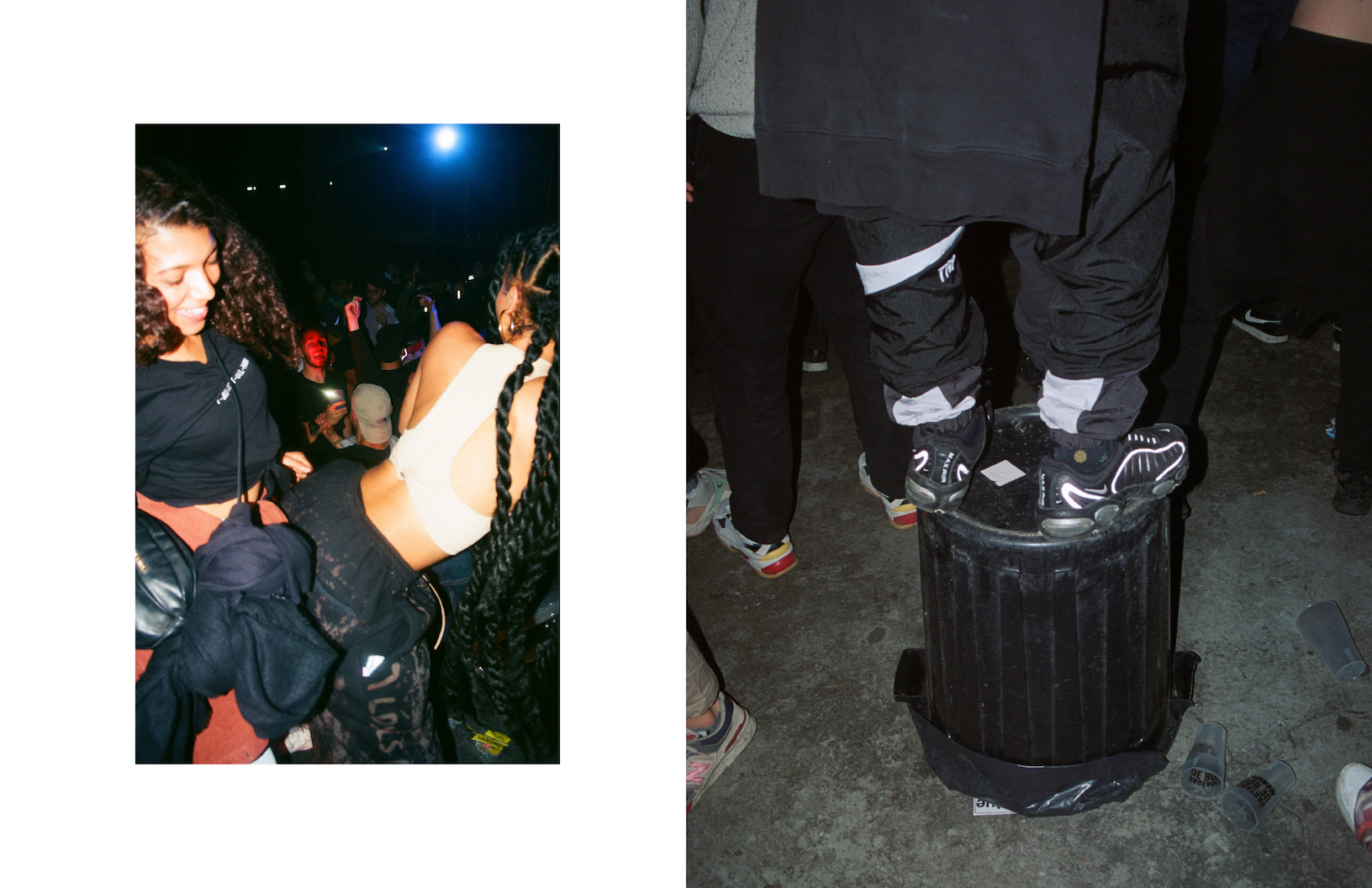 From 1985 to the early 90s, early rave culture was fuelled by drugs and the electric styles of both House and Techno music that were tearing up Chicago’s gay club scene and Detroit’s many underground spaces. Quickly dominating sound systems across the globe, its heady migration from America to Ibiza, London and ‘Madchester’ was chronicled in music reviews by the former editor of The Face and The Observer and author of rave-themed book Adventures in Wonderland, Sheryl Garratt.

“It was about comfort, being able to move, and being practical,” she says, praising the baggy wardrobe that facilitated non-stop dancing from Friday night to Monday morning; Neil Barrett’s recent oversized jackets and shorts for its SS22 season would have made appropriate outfits. 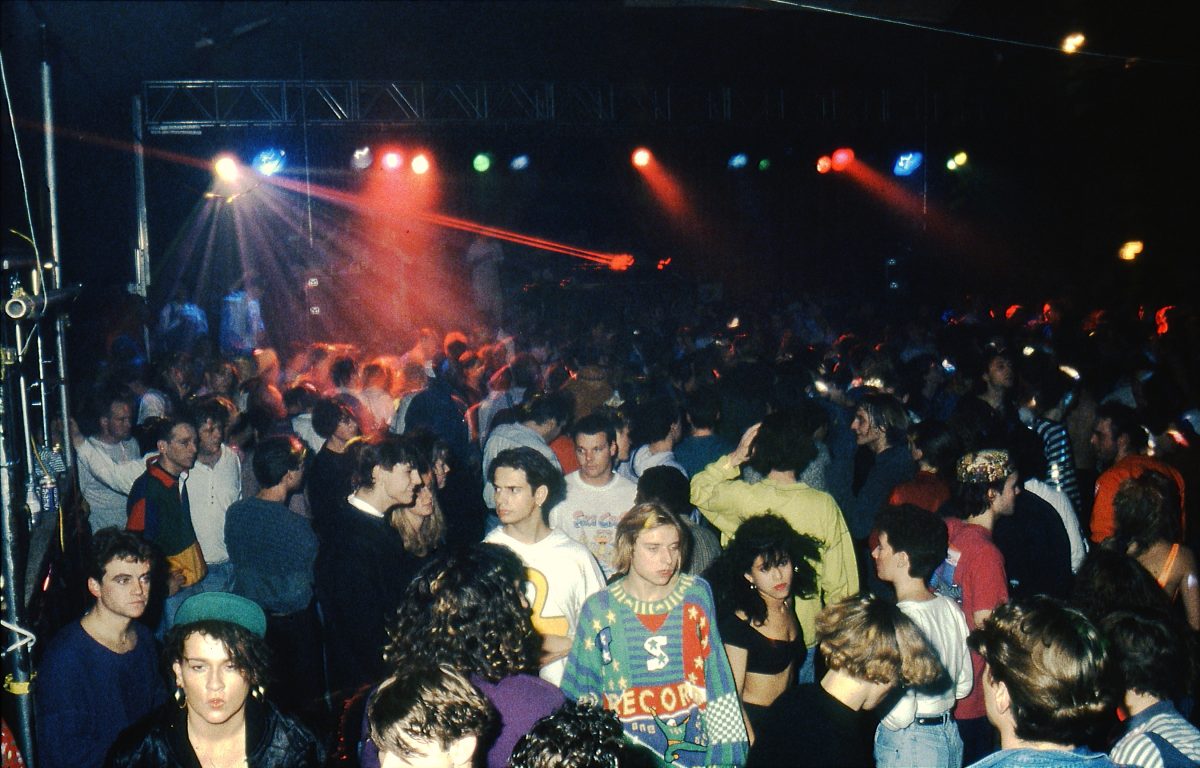 People at a rave, UK, 1980s.
photography. Gavin Watson. Courtesy of the Museum of Youth Culture. 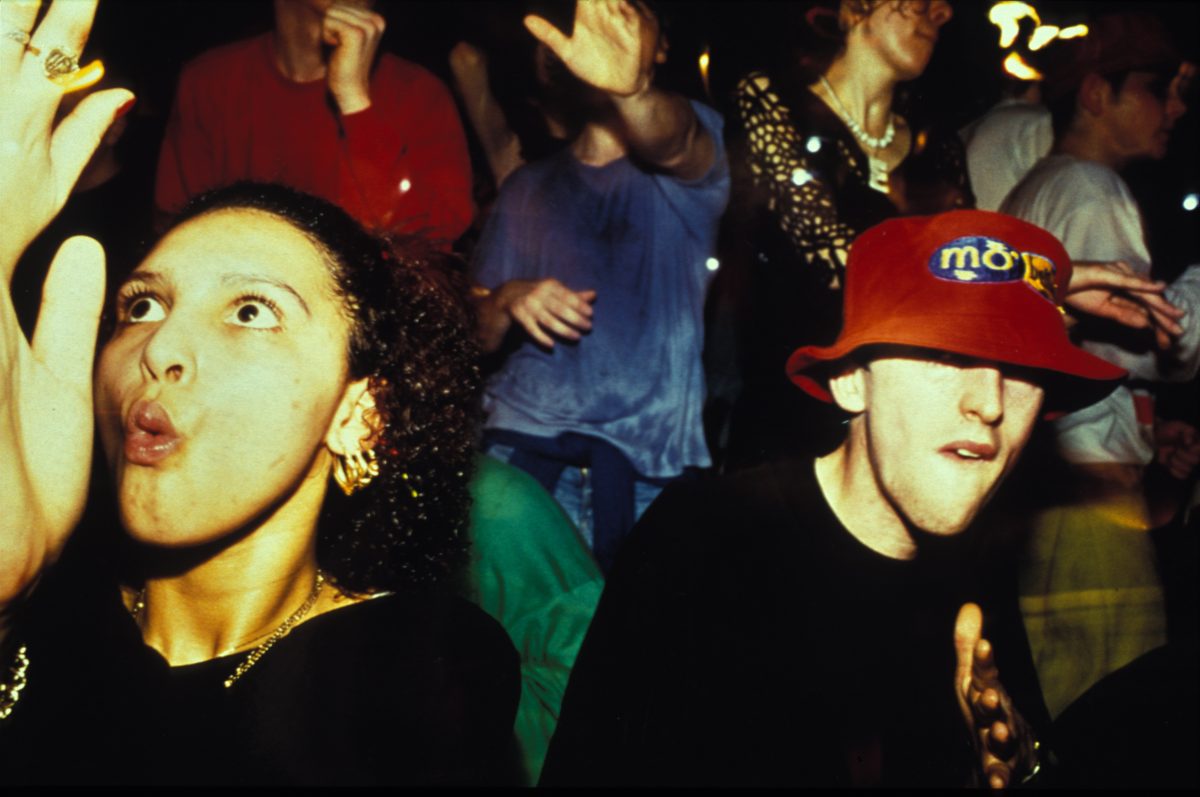 Garratt believes that the relaxed silhouettes and vivid hues were reactions against the era’s monochrome power dressing, and the agonising lull of the Thatcher years. “There’s typically a resurgence in club culture during times of unrest” she declares, before comparing the thirst to party with adolescent’s desire to “gather together and wanting to enjoy themselves” post-COVID.

In the early years, loose clothing reflected a slackening in social formality. Concurrently, the rise of club drugs eliminated boundaries, bringing rave attendees both together physically and unified spiritually. According to Chris Sullivan, the joint-author of 80s club culture bible We Can Be Heroes along with Graham Smith, the vast amounts of Acid ‘dubs’ available “were part of the whole package.” For Sullivan, this potent combination of drugs, perceived unity and fashion exposed “the spirit of youth.”

As the owner of the legendary Wag Club in 1984, Sullivan invited soon-to-be famous DJs Paul Atkinson and Danny Rampling to experience this newfound frontier in-person through Ibiza’s open air nightclubs. Every night, the groups would watch as clubs consistently packed in mobs of sweaty teens and twenty-somethings wearing psychedelic tie-dye garb and jumping sporadically to electronic beats. 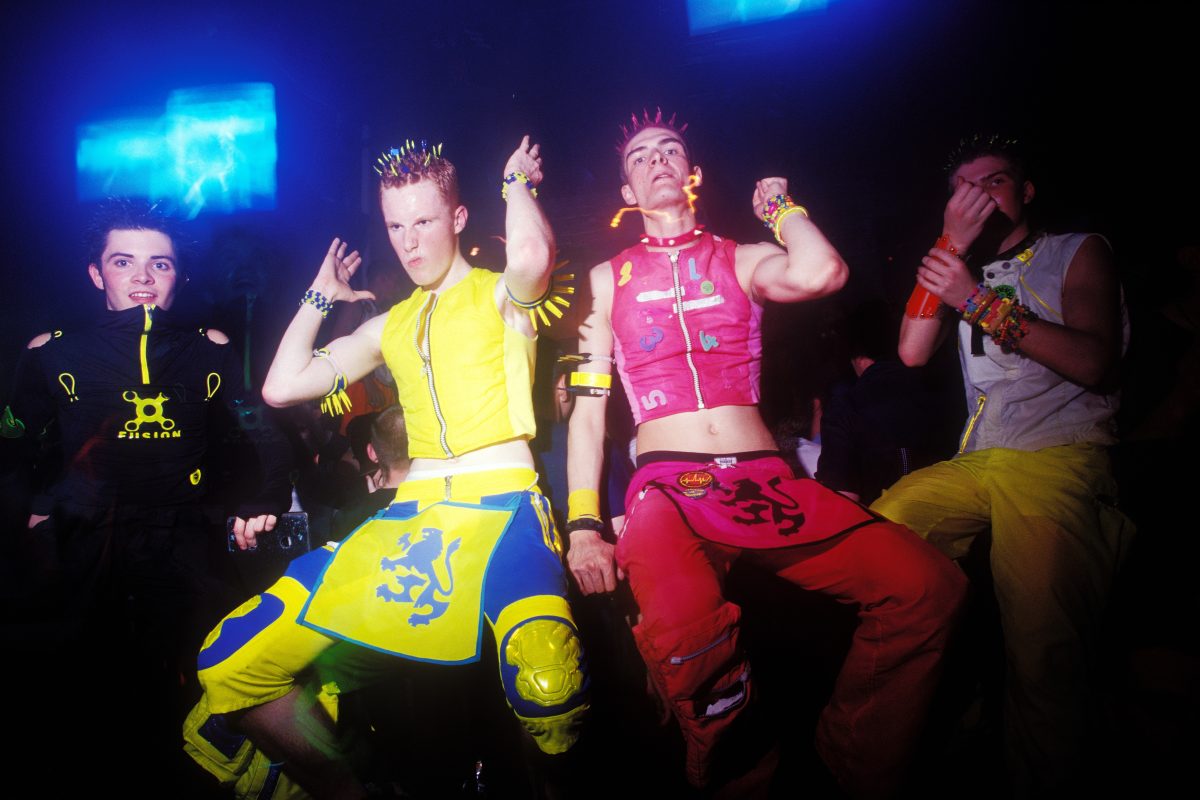 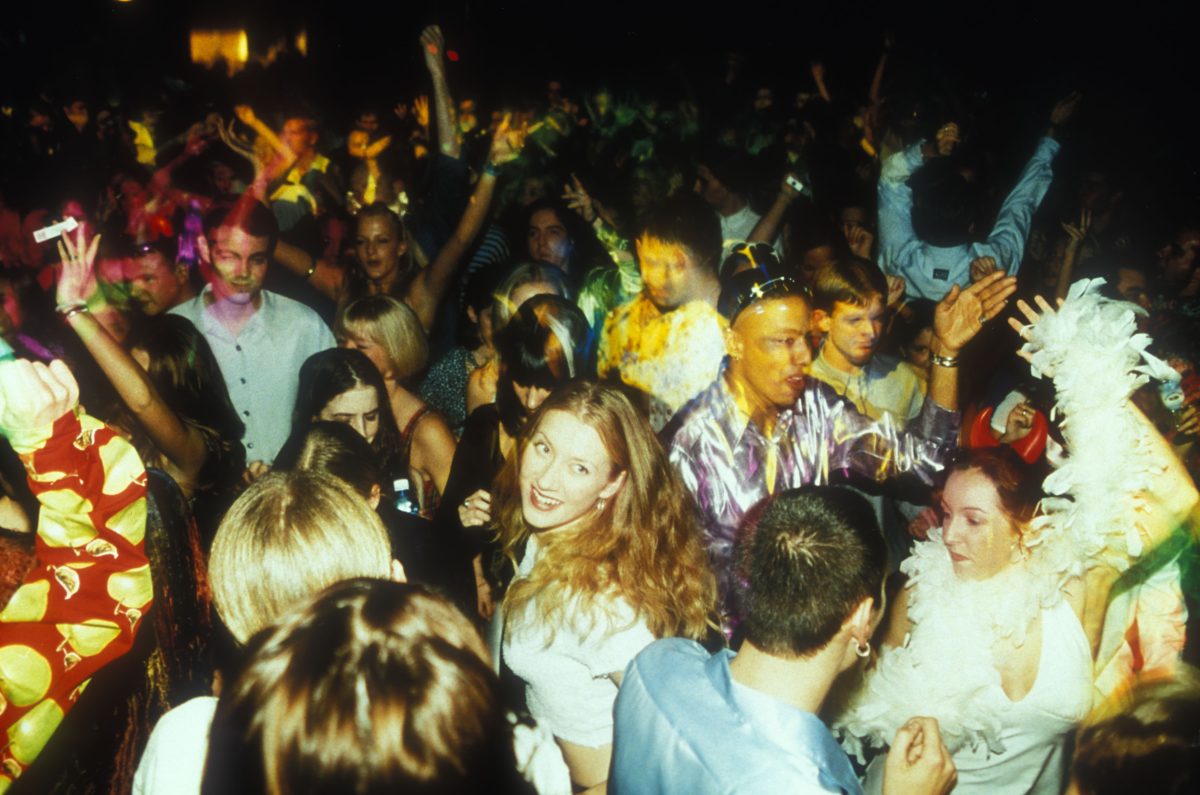 “It was brilliant. It was frightening,” beams Sullivan, who ascribes the clothes’ vibrancy to MDMA and its tendency to intensify colours. “Hippies always dressed in bright colours, didn’t they? It’s the same thing.”

Garratt also likens the excessive drug usage to 60s hippies, mirroring the ‘free love’ movement with the debauchery that roared inside London-based venues Heaven and The Astoria in 1988. For Garratt, these venues became safe spaces where you could experiment; “if you were a boy, you could put a dress on.”

Returning to the present, this fluidity was emulated by ambiguously flared garments in LOEWE’s SS22 Men’s collection, which was accompanied by a book shot by rave veteran David Sims and inspired by creative director JW Anderson’s childhood holidays in Ibiza. An assortment of experimental photographs, the book’s imagery includes exploding water balloons, neon lasers and models grooving in a grotty warehouse or stumbling on the beach — possibly, the morning after a major blow out.

“It’ll be interesting to see if some of this gets sold,” laughs Dave Swindells, a photojournalist who documented Balearic clubbing in his book Ibiza ‘89.

When observing LOEWE’s lineup, he immediately recognised fanny packs, kickers and layering from his experience on the island four decades ago. A pyramid motif referenced the iconic Ibiza club Amnesia, whilst other visuals were shrouded in a misty filter as if “blurred by a complete ecstasy haze,” says Sullivan.

Swindells claims that the trend has been years in the making. Recounting it, he traces its most recent resurgence to when he was approached by the reseller market Depop in 2018 and asked to contribute to a promotional film on rave-wear. Apparently, it was the site’s most popular clothing genre at the time. 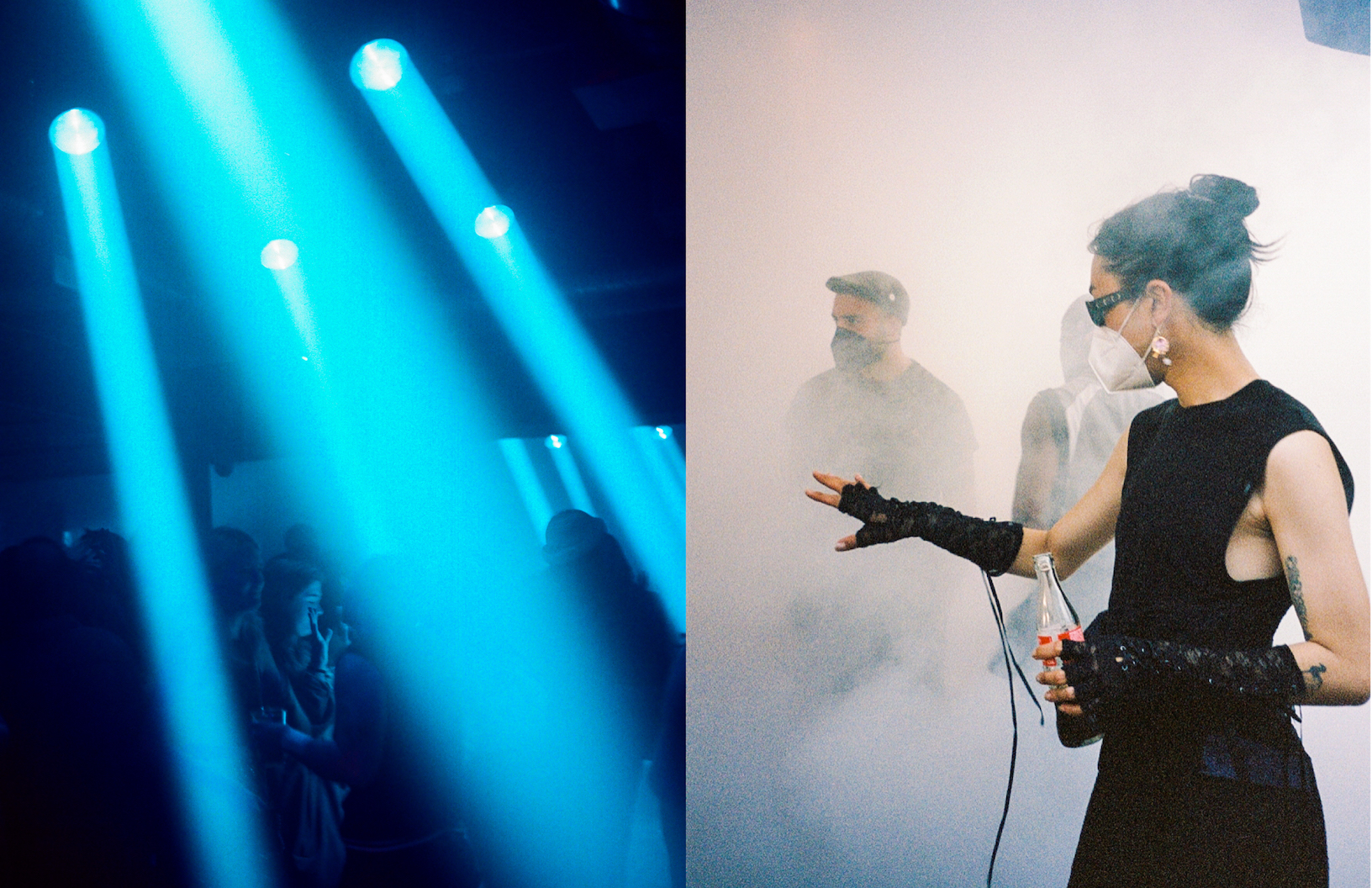 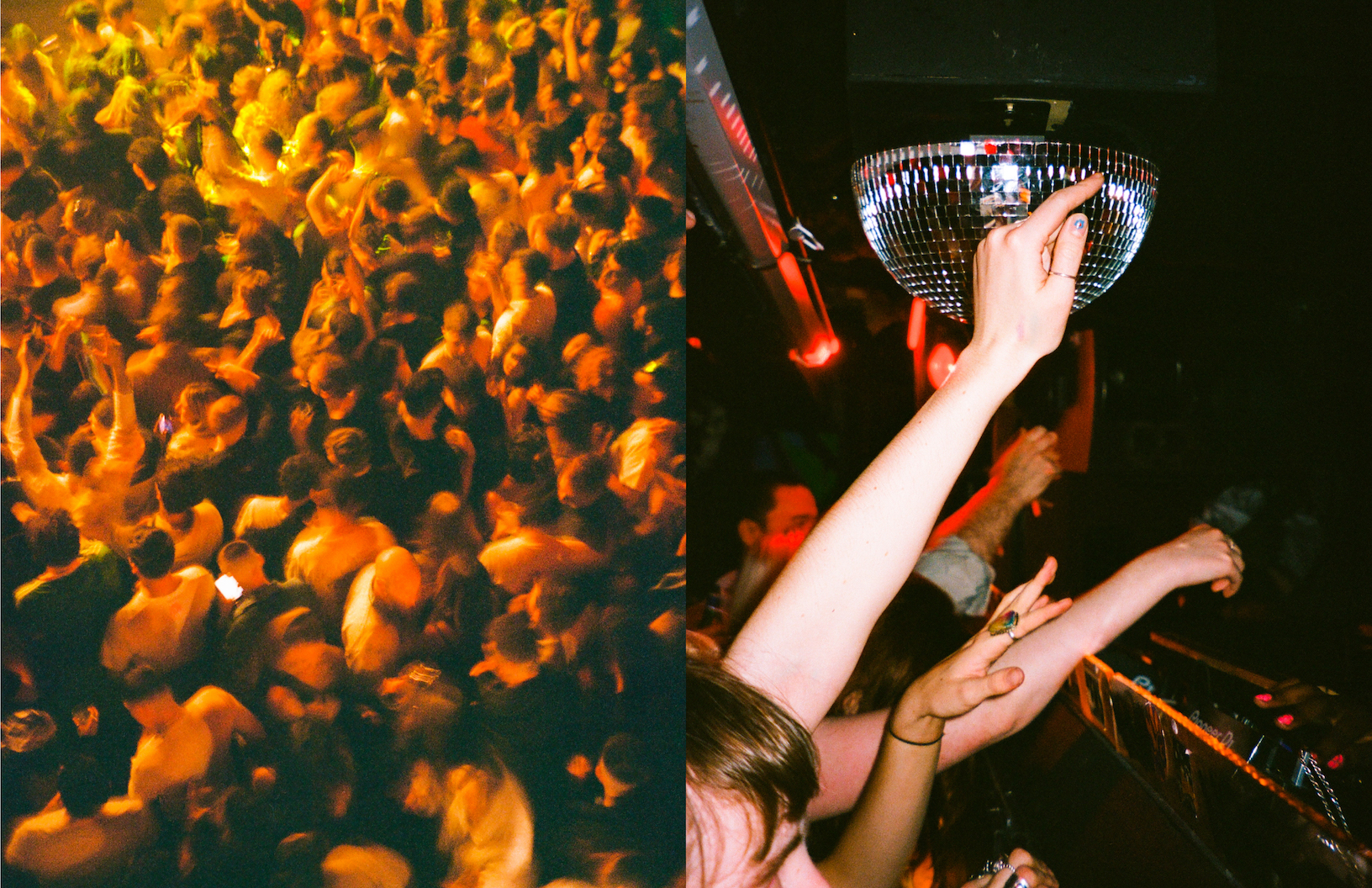 However, this is not the first time ravewear has resurfaced. New Rave again reared its comically fluorescent head between 2005 and 2008. For her part, Garratt remarked that she’s never “been through a year of shows and not seen it being referenced.”

As well as fascinating designers, images from the iconic era have inspired up-and-coming photographers like Karl Magee to capture modern clubbing, finding ways to show its similarities to previous generations while also highlighting contemporary club culture’s many differences. Much of this photography can be found at The Museum of Youth Culture, which currently relies on crowdfunding to continue its work and secure a permanent space. The museum’s digital archive is enchanting, showcasing the styles, sounds and social movements innovated by young people over the last century, and how those innovations continue to influence culture today.

Over time, rave subculture has become an exuberant form of escapism both on and off the dancefloor — and it’s no wonder designers of all generations still find themselves stretching, highlighting and scribbling on garments to evoke elements of its strobe-lit wilderness. Through fashion, these designers chasing a feeling that, as Swindells says, “literally changed people’s lives.” Considering the last couple of years, it’s a feeling to which many can relate. 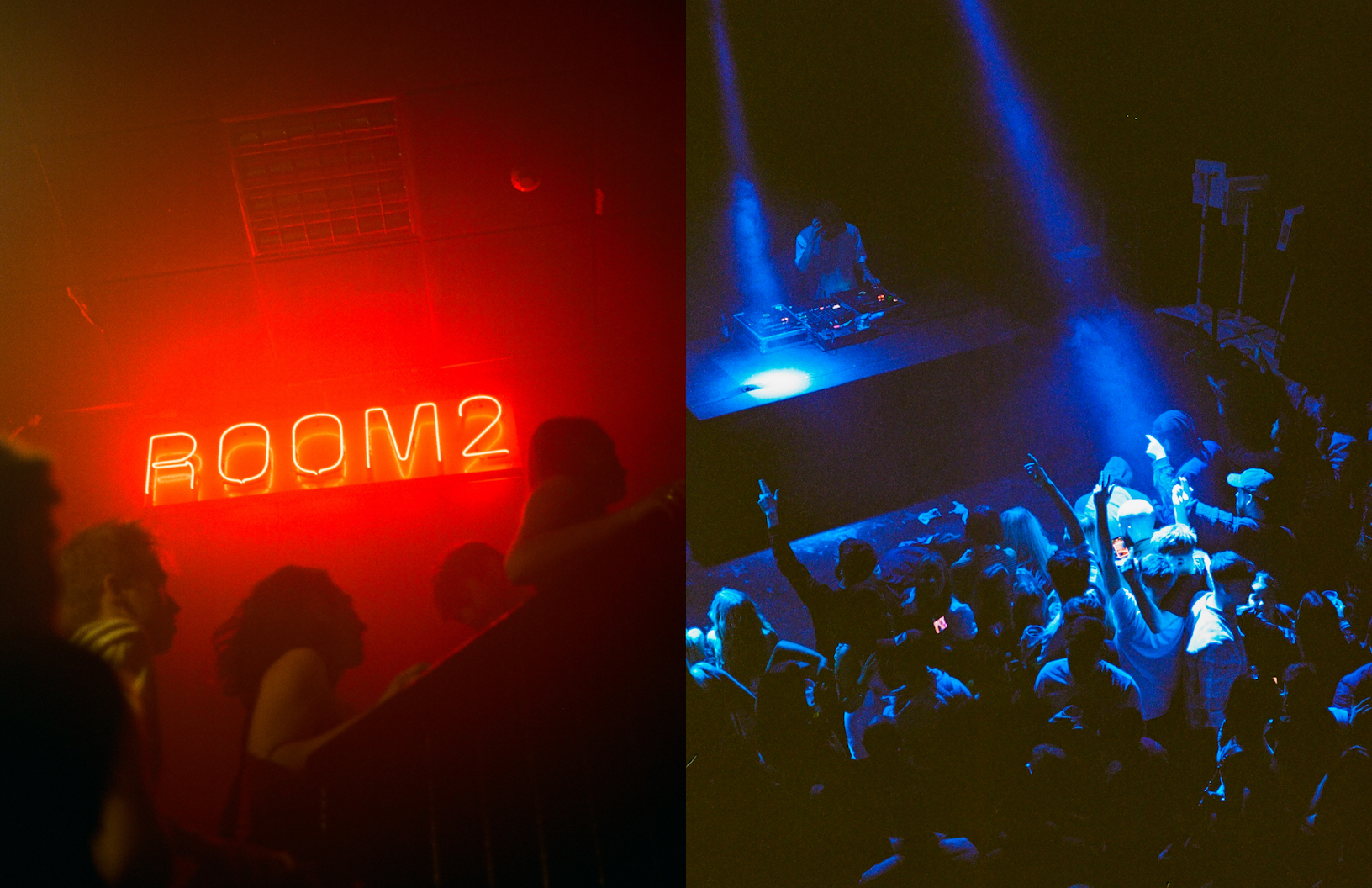