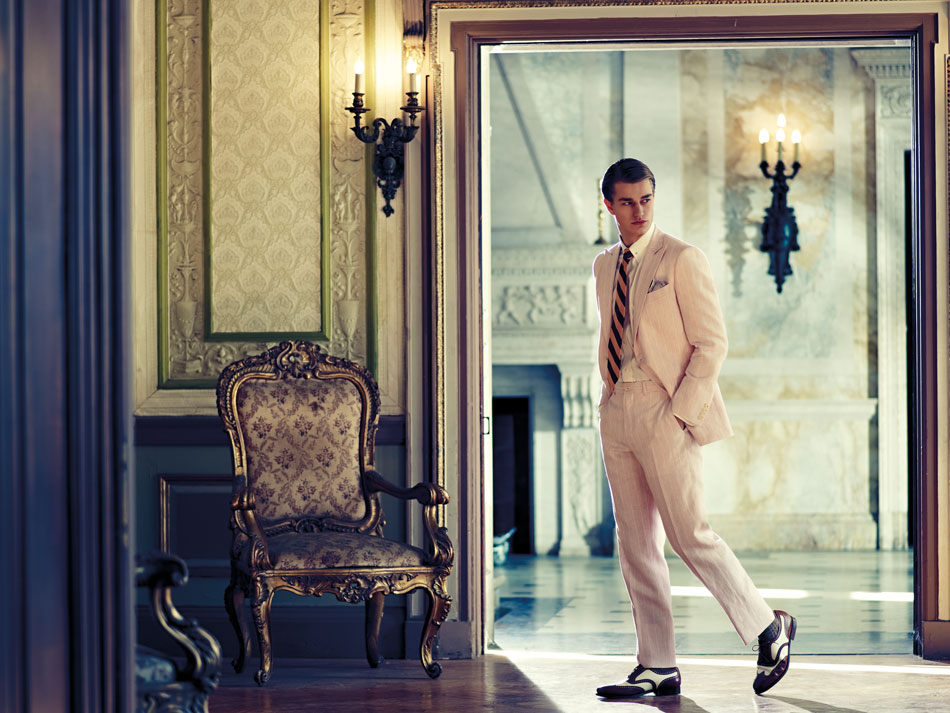 From the Brooks Brothers limited collection inspired by The Great Gatsby

ON THE DAY OF ITS CINEMA RELEASE, SCHÖN! EXPLORES THE COSTUMES OF THIS YEAR’S MOST HIGHLY AWAITED FILM, ‘THE GREAT GATSBY’.

A film adaptation of one of the greatest American novels of the 20th Century is always going to come under close scrutiny and, with delays to its release date, Baz Luhrmann’s long awaited interpretation of F. Scott Fitzgerald’s ‘The Great Gatsby’ is certainly no exception. Added pressure comes courtesy of a cinema classic: the 1974 version written by Francis Ford Coppola and starring screen icons Robert Redford, Mia Farrow and Bruce Dern. This time around, the leading roles are reprised by Leonardo DiCaprio, Carey Mulligan and Tobey Maguire, whose costumes are as highly anticipated as their performances.

‘The Great Gatsby’ is arguably THE seminal representation of the roaring twenties and the jazz age; its characters drawn from the young, beautiful and rich of Long Island. The 1974 version, with costumes by Ralph Lauren, has inspired countless catwalk collections and with flapper dresses and deco details sashaying down the runways of Gucci, Etro etc. these past few months, Luhrmann’s offering looks set to achieve similar sartorial success. This success can largely be credited to his wife and long-term collaborator, the multi Academy Award and BAFTA winning costume and production designer Catherine Martin. 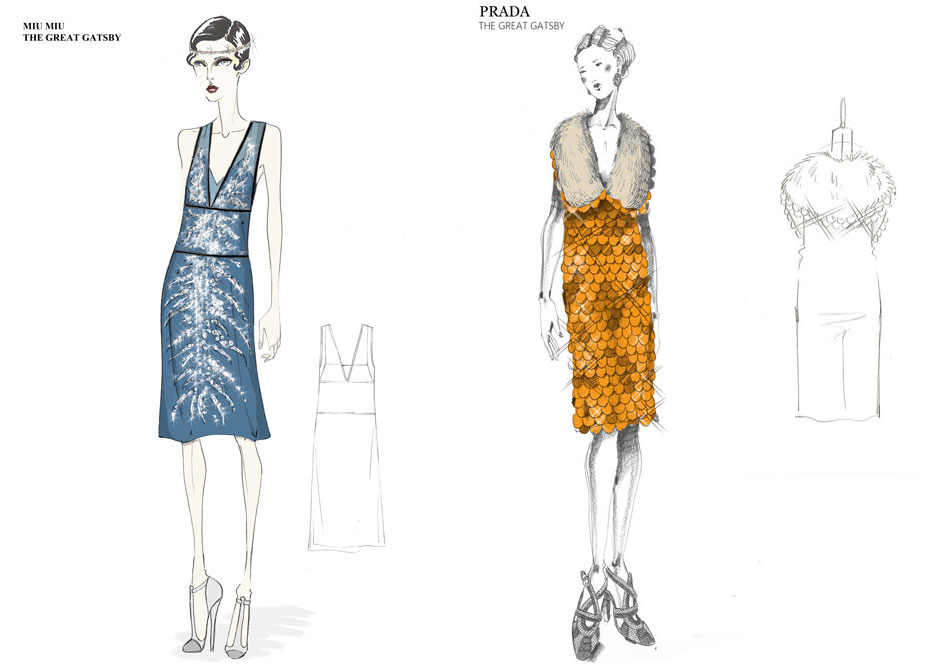 Once again, fashion brands have played a major role in the creation of the costumes for Fitzgerald’s characters and Martin has chosen them carefully. She decided to collaborate with Miuccia Prada on the sumptuous clothing of the female characters, and together they created a bespoke collection of over 40 unique Miu Miu and Prada cocktail and evening dresses, inspired by runway looks from the last 20 years. “Baz and Miuccia have always connected on their shared fascination with finding modern ways of releasing classic and historical references from the shackles of the past,” explains Martin. “This connection is central to our relationship with Miuccia Prada on ‘The Great Gatsby’, and has connected our vision with hers…We have tried to create an environment that the audience will be subconsciously familiar with, yet separated from.” 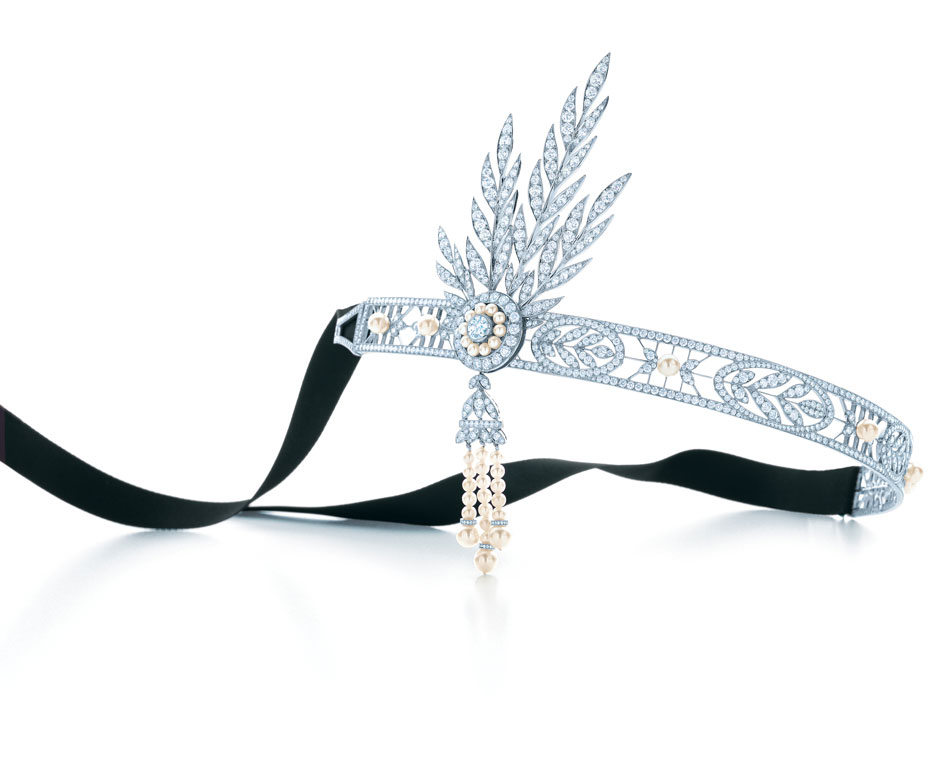 From The Great Gatsby Collection by Tiffany & Co.

A specially designed collection of platinum-set diamond and pearl jewellery from Tiffany & Co perfectly complements the period clothes. As America’s first great jeweller, Tiffany & Co symbolised the glitz and glamour of this golden age and, according to Martin, “seemed the perfect fit for ‘The Great Gatsby’ not only because F. Scott Fitzgerald himself was a customer but also because Louis Comfort Tiffany, the brand’s first Design Director, mixed in the actual Long Island circles described in the novel.” Tiffany & Co even supplied the china, silver and other accessories that adorn the interior of Jay Gatsby’s mansion in the film.

To accompany the cinema release and to celebrate its 175th anniversary, Tiffany & Co will release the Ziegfeld collection in June. Based on the brand’s art deco designs from the 1920s and the daisy motif that is integral to the movie, it includes pieces in sterling silver, black onyx and, of course, ropes of luxurious pearls – a signature of 1920s fashion. The gentlemen have not been forgotten, with black enamel cufflinks and a black onyx signet ring to complete the collection.

Meanwhile, Brooks Brothers has produced more than 500 ensembles for the male characters in the film based on Martin’s designs, many of which were inspired by 1920s items from the brand’s archives. Established in New York in 1818, Brooks Brothers is America’s oldest ready-to-wear retailer and, as Martin points out, is “mentioned numerous times in Fitzgerald’s writings as a representation of the ultimate gentleman’s purveyor of fine clothing to the American man of distinction. It is this most basic and fundamental connection that has made our collaboration so authentic.”

Brooks Brothers has just released a limited edition collection for Spring/Summer based on Martin’s costume designs, including a version of the pink linen suit worn by DiCaprio – a symbol in Fitzgerald’s novel of all that remains naïve and fresh about Gatsby despite his wealth and opulent lifestyle – with the addition of subtle pinstripes. The collection also features bow ties produced using archival fabrics, bowler hats, regatta blazers and even a beech wood walking stick based on the one Gatsby carries in the film.

So ladies and gentlemen, don’t forget that Gatsby style is not reserved for the big screen. Whether it’s pearls or pinstripes, Prada or preppy, this is your chance to grab a piece of costume history for yourselves.

The Great Gatsby is released by Warner Brothers on 16th May 2013. For more information, visit thegreatgatsbymovie.com