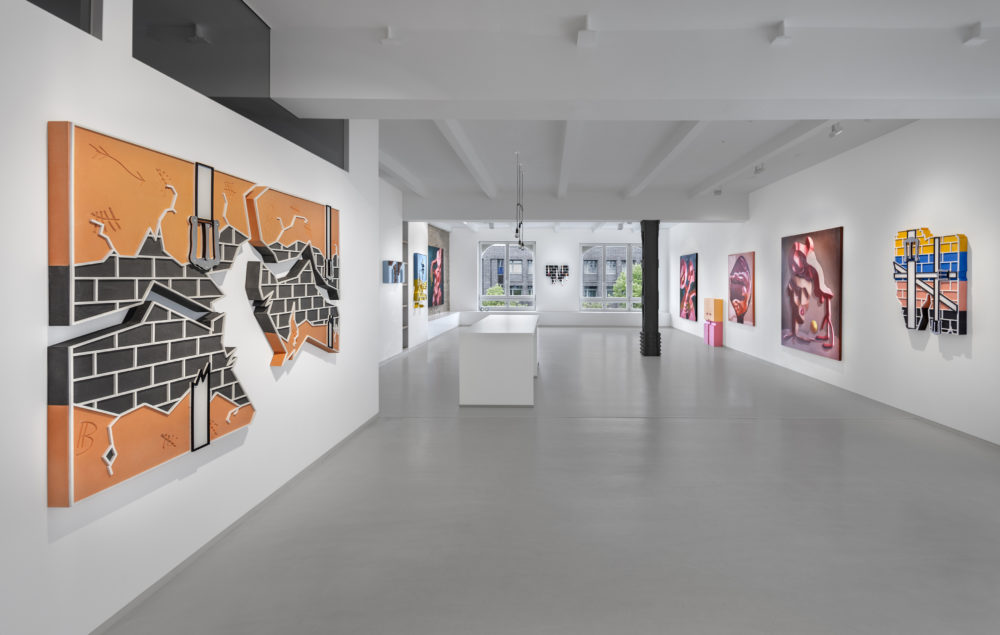 Cathrin Hoffmann and Liam Fallon create abstract work for increasingly abstract times, a notion borne out in their current exhibition at DUVE Berlin, Somewhere In-Between. The show, currently on view in-person at DUVE Berlin and virtually thanks to Artland, is somewhat of a duet between the two artists. Both artists are endlessly capable storytellers, and as one ventures through the exhibition, strong narratives form detailing a series of dualities — society and isolation, openness and privacy, holding on and letting go.

While the artists naturally explore these themes differently, the ease with which their pieces blend works to blur the distinction, resulting in a deeply personal show that does not fear getting too alternately playful or cerebral. Schön! spoke with the artists to hear more about the show and the works within.

What themes do you see carrying through your various pieces featured in this show?

LF: The idea of two is something that is carried throughout the works, and this is explored in multiple ways. When I was making the work, I was often thinking about the terms ‘head to head’, ‘push and pull’, ‘give and take’, and from that, it started to physically manifest in the work; for example, a physical action which then causes something to break — and I suppose really questioning how I can physically and metaphorically bring about this idea of ‘2’. Even in the sense of the naming of the work, I think that it can often be the key to opening up that conversation. I think the work ‘Blowback’ does that quite well, as it alludes to a back and forth between two people.

CH: When Liam and I started thinking about this show as a duo, we wondered how we could really play with this idea of “duo”. That was our starting point, and after some research, we came up with the term “dyad”, which can roughly be defined as a pair of individuals existing together. With this term in mind, new thoughts arose while I was working on the paintings. Like the meaning of otherness, for example. So that it is only possible to develop further in interaction with a counterpart. Identity is nothing if everything is the same, which would consequently lead to a standstill. Or to think completely differently, that individuality is only fiction because everyone wants to be different, for the reason that everyone is the same anyway. The “dyad” can also be seen as a construct of resonance. That means, how do we react to others or to objects or to ideas/thoughts/nature etc., and what does the echo in our behaviour look like that comes back? And how do we then react with it again? And so on and so forth. 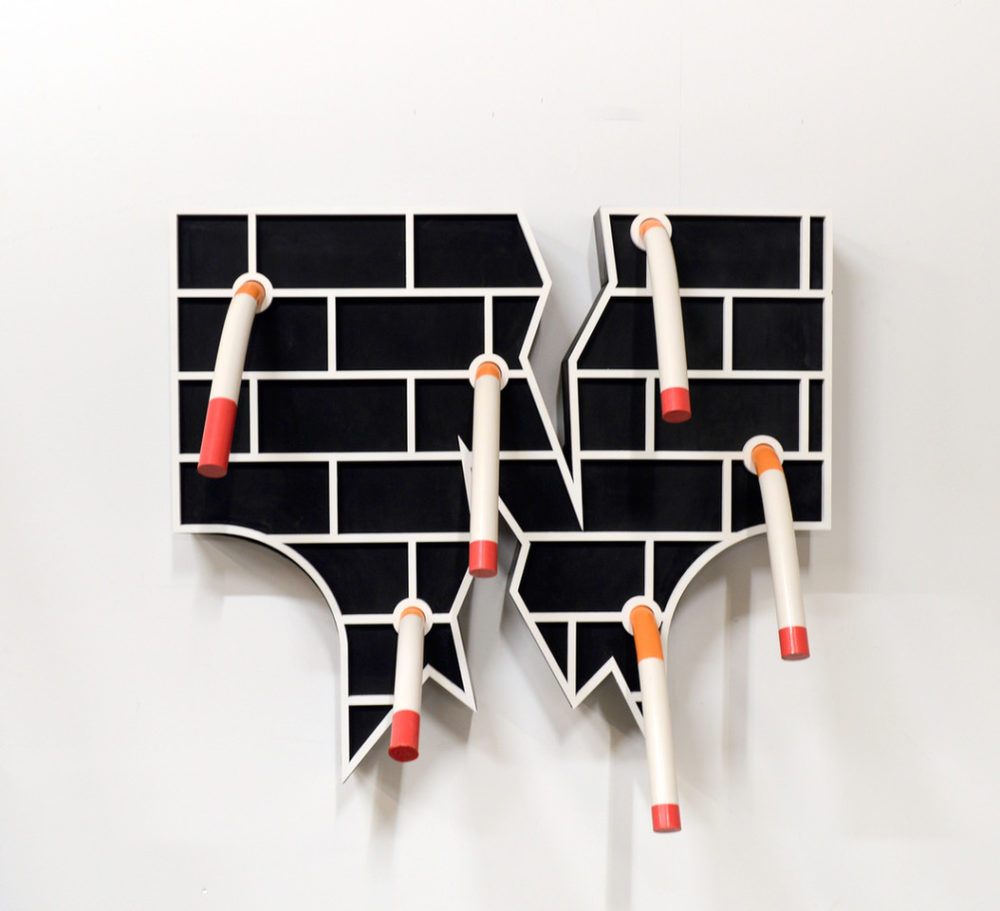 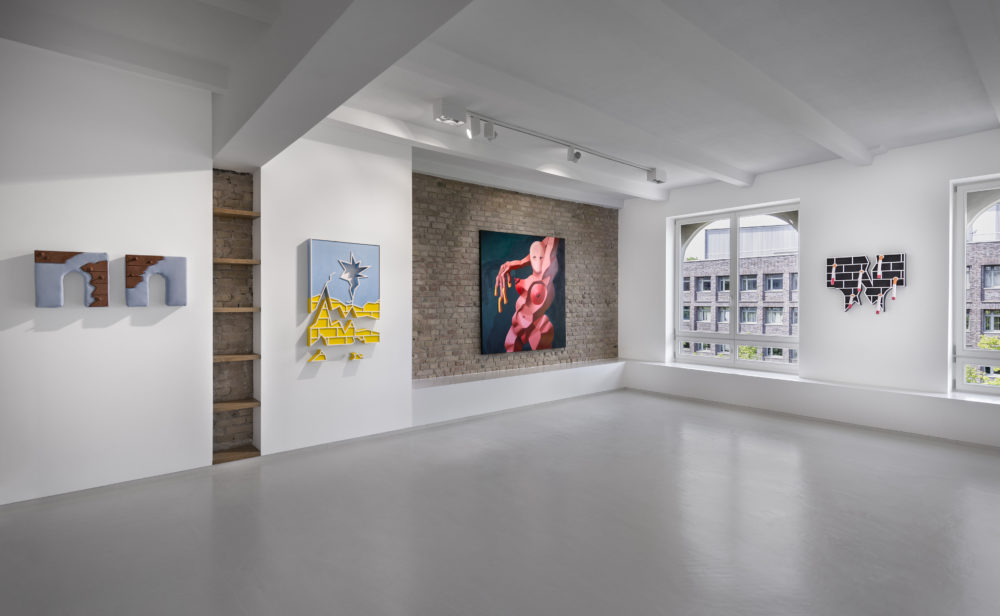 Liam, you incorporate many everyday objects into your work. Do you find there’s one object you keep returning to? Why do you think your mind has settled on it?

LF: I often return to the brickwork pieces as for me there is a constant line of inquiry with them. Over the years, they have become an ongoing series, and with that, I can come and go with them; adapting them when it’s necessary and working on different things in the meantime. Due to my work being an investigation into private and public, I think that for me, the brick wall is an emblem for this; a physical marker between two sides and the presence of them alludes to the encounters happening either side of them. Based on this and as they define the different elements in my practice, I think it’ll be a motif that I use for quite some time!

Catherin, there’s a strong sense of humour through much of your work. What do you think has been most influential to your sense of humour and your push to explore that on canvas?

CH: First of all, great question! Not many people see humour in my pictures. But it is definitely contained in them. In general, my pictures often deal with human existence. The consciousness about it and at the same time the knowledge about the inevitable death. This creates a predicament that either leads to rigidity and denial or depression. And I think the only way to fight against this discouraging maelstrom of thoughts is humour. Humour is typically human, and perhaps that is exactly what evolution has been about since our consciousness has fully developed. Well, I’m no biologist, but at least for me, it’s crucial. 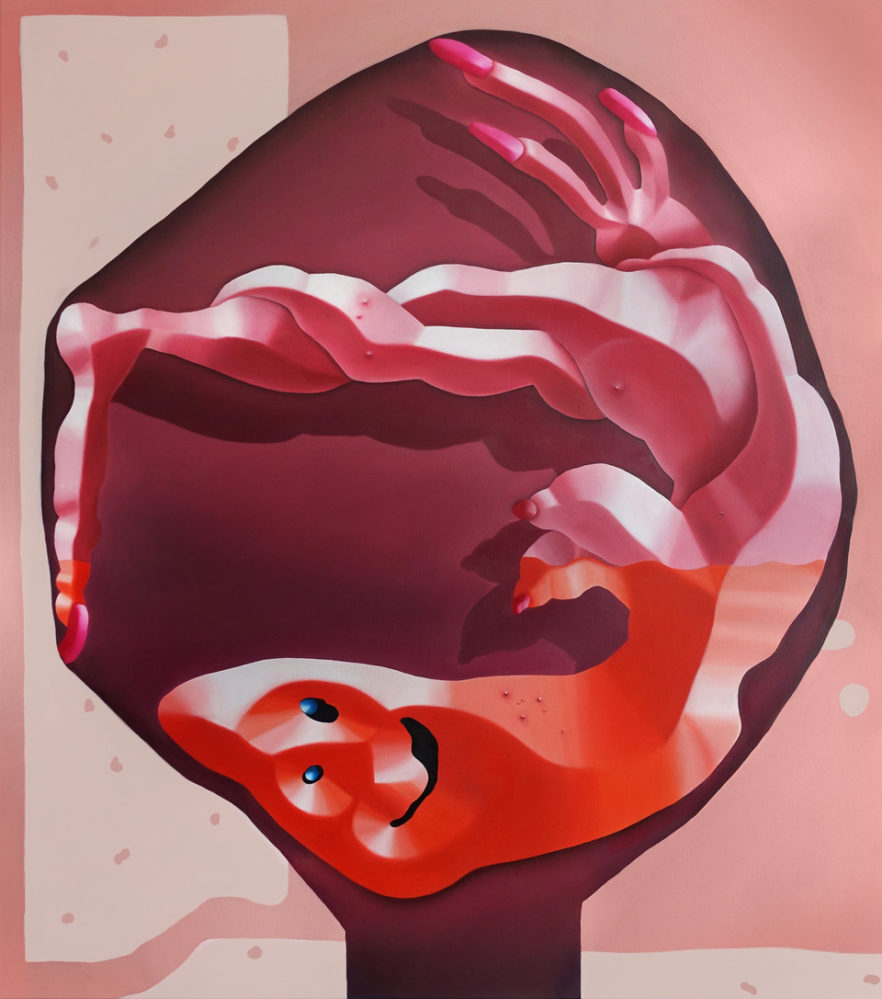 His Buttonhole Is So Empty And Empty by Cathrin Hoffman. Photo provided by DUVE Berlin

Speaking of biology, your work also features a lot of body-like forms. What first attracted you to the human body as a subject? What parts do you most enjoy playing with artistically?

CH: I want to portray the human being and the sentimental value in our present time. This includes the physicality. I understand the body as a place of action, like a crime scene, and this is how I want to stage it. I create a human figure that has many similarities but is still clearly unreal against timeless empty backgrounds that are like intermediate worlds. A new virtual body with its weaknesses and peculiarities. I like to twist and strain the body so that it already hurts the eye. But only this can create a new level, which separates from the pure body and concentrates completely on the emotion. That’s my intention.

For both of you, how did the period of quarantine that preceded this show impact how you view the pieces in this show today?

CH: I noticed that our title for the show was strangely prophetic. “Somewhere In Between”, I think, describes the quarantine situation quite aptly. I have a similar feeling about my work on the show. COVID-19 is like a burning glass hovering over us. It focuses and amplifies both the good and the worst in our society, especially in social interaction. I think that my pictures, which have anyway focused on people and interpersonal relationships, suddenly caricature exactly this new weird world.

LF: In terms of context, it’s not necessarily changed my view of the works. However, I always attend the exhibition install to help and to sort out any last-minute things, but obviously, for this show, I’ve not been able to and I’ve found that quite difficult. But it’s been a necessary time for reflection with my work. But saying that, I think there are many artists all over the world in the same position, and I think there is a little bit of comfort in that. Being stuck in this weird position has, if anything, forced me to reflect on the works and the making of the pieces; figuring out the next steps and acknowledging where changes need to be made. 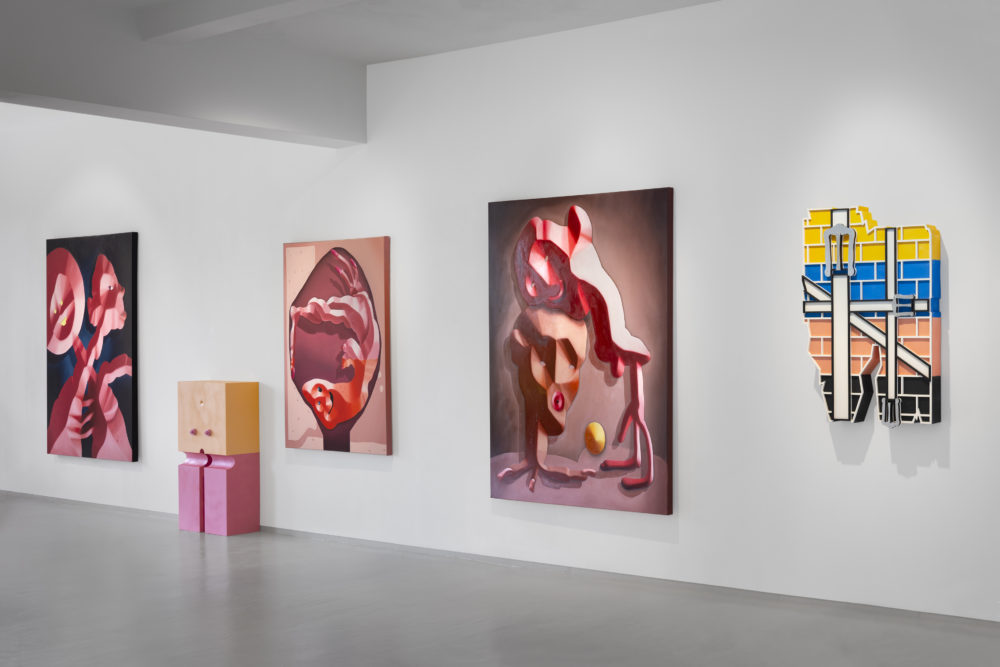 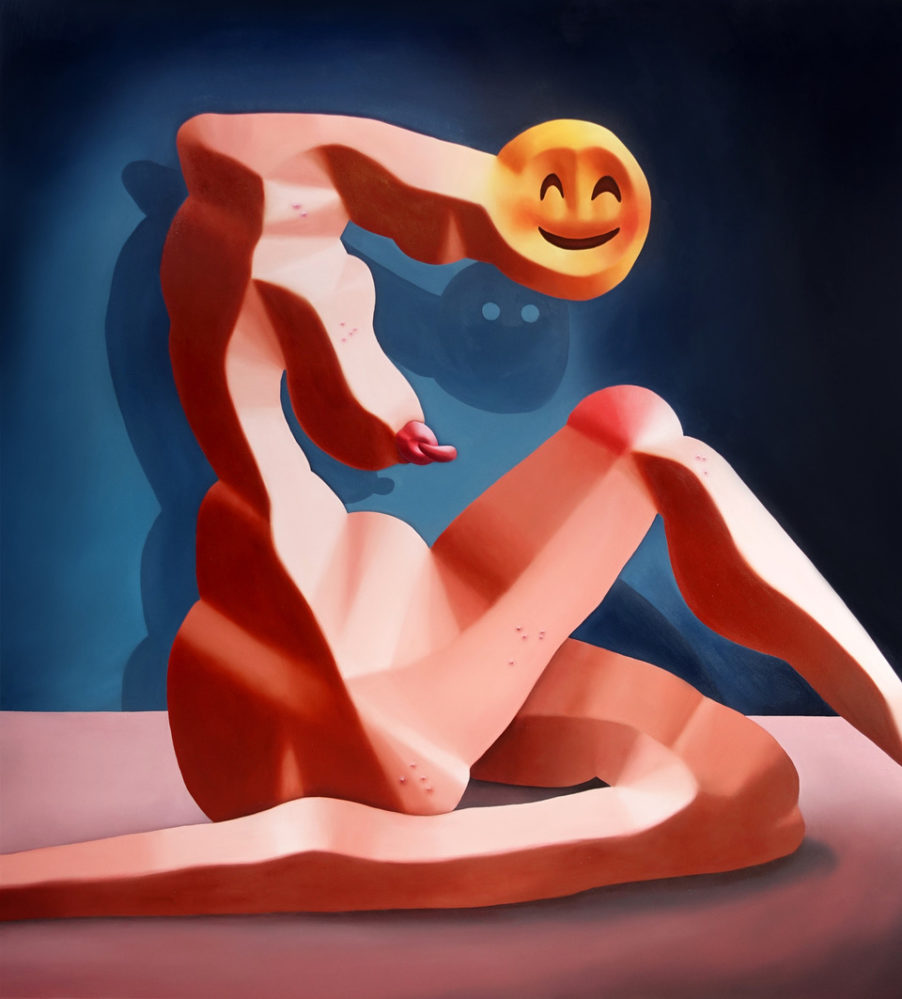 Is This A Lot Of Feelings by Cathrin Hoffman. Photo provided by DUVE Berlin

Why do you feel your works complement each other so well?

LF: Well, I think a shared area of interest in both of our work is that of abstraction — Cathrin’s work is figurative, but at the same time, not figurative at all! The forms that she paints are completely alien-like, and they’re often paired with objects which then helps with the unwrapping of the themes in the painting. For me, this is where the parallels can begin being drawn and is one of the main reasons as to why I feel Cathrin’s work complements mine. In my work, despite the forms appearing as brick walls, the objects that they’re paired with anthropomorphise them and then they suddenly take on the form of abstracted bodies. I think there is a real echoing of backwards and forwards between our work…I also can’t deny the fact that her paintings are incredibly sculptural, too!

CH: What I find special about Liam’s work is that he manages to create emotions through surfaces and everyday objects. Blasted walls combined with open belts or soft fabrics covered with hardwood suddenly create narratives in the mind without the representation of a single figure. I think that my painted figures, which also appear very sculptural, complement this part, and that together we tell a whole new story. Have the creatures I created perhaps escaped through the broken walls? Were they locked up at all, or did they perhaps even destroy them? Or is it simply a feeling of social or inner fragmentation that we carry within us? I find it exciting that there is no clear answer, but that the pieces of the emotional puzzle can be put together with both of our works.

Somewhere In-Between is on view at DUVE Berlin until July 1, 2020.