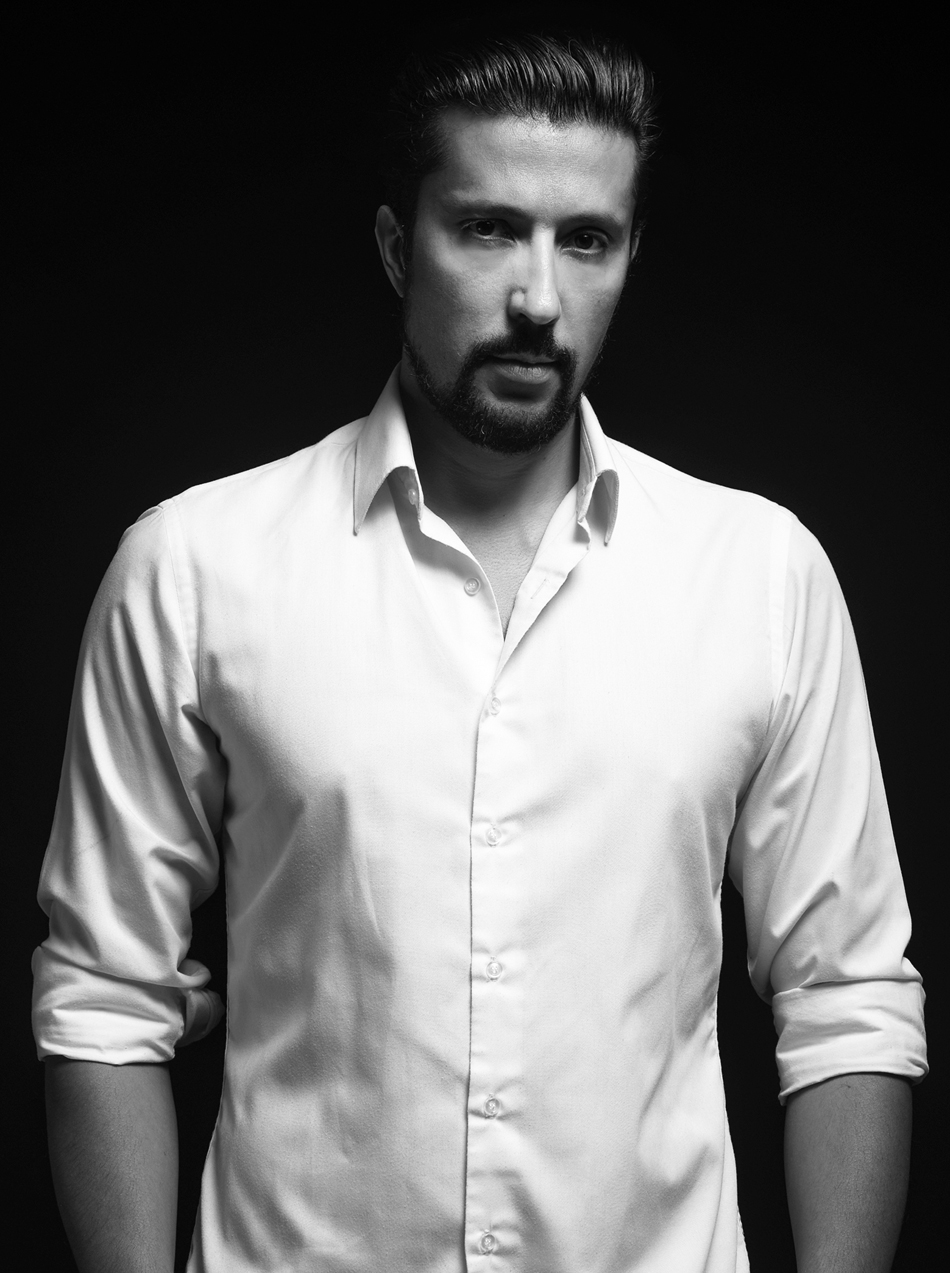 When it comes to defining Stéphane Malka’s work, unclassifiable is undoubtedly the first word that comes to mind. Born in Marseilles in southern France, Malka went on to become a prominent figure in the art of graffiti. It was his early passion for creating huge frescoes throughout industrial wastelands and in Paris’ suburbia, he states, that turned him into an architect, with a particular fascination for neglected urban interstices.

After graduating, he briefly joined the famous Ateliers Jean Nouvel, before setting out on his own, with Malka Architecture.Whether it’s working on a shop over Galeries Lafayette’s roof, or on a project involving a troglodyte cave made of polystyrene chips for Santorini Art Biennale, or on the Blackblock store at Le Palais de Tokyo, Stéphane Malka skillfully balances architecture and contemporary art. A few days before the release of his first book Le Petit Paris, Schön! met Stéphane Malka at his Parisian agency.

Could you say that your work lies somewhere between architecture and contemporary art?

Yes, indeed. I admire contemporary art’s enormous capacity to criticise, a quality seriously endangered in architecture today. Contemporary art pushes criticism to a climax, sometimes ridiculously and with self-mockery. But you either love it or you hate it, there is no doubt that it’s a transversal exploration of today’s society.

On the other hand, conservatism is deeply rooted in architecture. It definitely fails to move ahead with our times. What does architecture offer today? A kind of modern take on Zaha Hadid’s vision, in other words, a hypothetical view of the future fantasised from the ‘80s. We would love to live in floating, curved, buildings, where we could enjoy aseptic existences. But such a vision does not reflect the society we’re living in today. The economic crisis has made all these stereotypes obsolete. 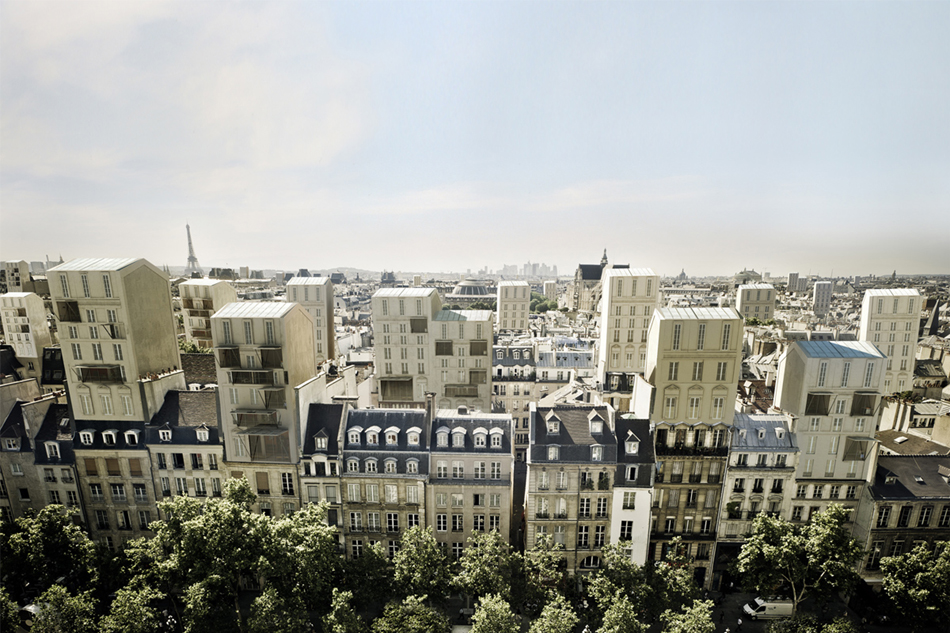 How was your first book, Le Petit Paris, born?

I imagined Le Petit Paris as a manifesto for a different architecture, in other words, a faster,  more intuitive and less elitist way to consider architecture. The message I would like to convey? The absolute necessity to adapt to current social constraints and to advocate for emergency architecture. The present economic environment is extremely challenging, there is a necessity to design a cheaper city, one that is more flexible.

At the same time, it is crucial to keep up with existing surroundings, to magnify them. The book suggests new ways of occupying empty spaces: rooftops, on bridges or underneath them, in any interstice or surface provided by the city, obviously without entering into a crazy rush towards more verticality.

What are the projects that you care about the most ?

Out of all of my projects, I would say Loopcamp, an installation or a wind instrument that I made for the Burning Man Festival in 2012, is one of my favourites. My project called Stealth Shelters in Marseilles too: an architectural installation of temporary housing based on improved vertical tents.

In relation to the Petit Paris projects, I would mention Self-Defense, some kind of architectural urban guerilla which would allow the public at large to re-appropriate the Grande Arche of La Défense, a symbol of financial capitalism located deep in the heart of the Parisian business district. There is also my project called Neossman, a constructive device of vertical development aimed at Haussmannian residential buildings which build up a large part of the Parisian urban fabric. 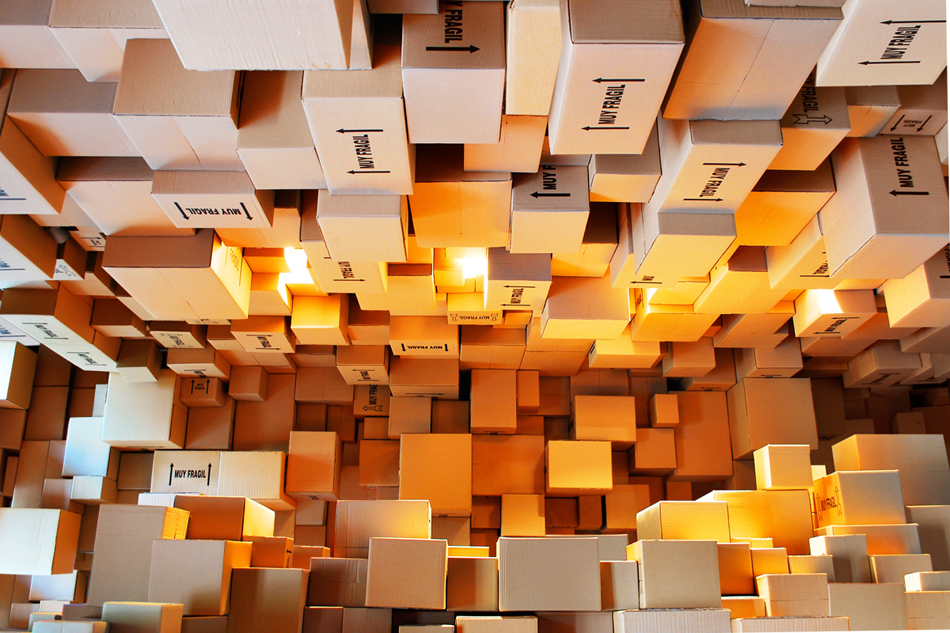 Your projects are kind of revolutionary in their own right. Do you face hostility from conservatism?

I am constantly confronted with hostility. In France, we have a very conservative vision of patrimony. Paris is now a ville-musée. Cultural Patrimony is alive, it is meant to evolve. Adding extra spaces on the sides or on top of a building is like putting a hat on it. It’s intellectually rewarding to provide new extensions without radically changing it, of course.

In the late 90s, you collaborated with Thierry Mugler. What did this encounter with fashion bring to you?

In 1999, I started to develop the staging of Mugler’s photo shoots, then I designed podiums and catwalks for his Haute Couture fashion shows in the Espace Wagram. It was at the end of Mugler’s Grande Époque, when it was all about the show, and oneiric worlds were still very present. It taught me how to work in a rush, and the importance of light over materials.

Graffiti is omnipresent in Le Petit Paris, and you’re from the “street art” scene. How do you consider street art today?

I feel that, being exposed in art galleries, for most the street artists, killed their capacity for renewal. Although I still notice some interesting things in the street, in art galleries, graffiti artists – or writers as they were originally called – quit vandalism too easily, in my opinion. The most exciting thing about graffiti is the contextual aspect. Moving it into the context of a white cozy gallery, with a Curator greeting guests with petits fours and champagne, simply destroys the essence of graffiti. It is now necessary for the activists to reinvent themselves. What would be great, and this is something that has not yet been done, to my knowledge, would be an exhibition of painted trains. It would be a real urban shock.

What are your upcoming projects?

I’m working on a project for the next Cannes Film Festival and a device for a Museum in São Paulo, the MIS. I’m conducting a study for the Venice Biennale as well, as a Pavilion for the World Expo Milan 2015.I would also like to develop problem-solving solutions, similar to those in Le Petit Paris, but in other urban areas. I would also like to expand my thinking, and, why not, design Le Petit Londres, Le Petit Rio, and explore urban tissues like New York or Cairo.