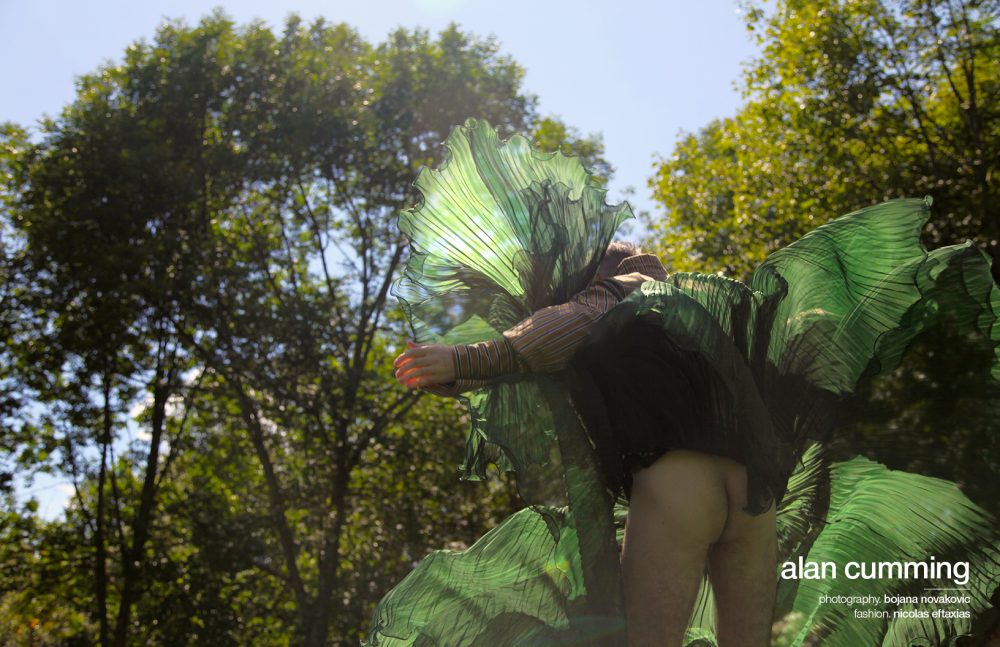 Alan’s energy is infectious. He makes coming to work enjoyable. He’s gregarious, an incredible storyteller (and self-proclaimed name-dropper) with an anecdote for everything. He’s fiercely smart, talented, hard-working and always prepared. And all of this before he’s had his Americano in the morning. I learn from and am inspired by him every day. Don’t worry, he also annoys me, but definitely not as much as I annoy him. We argue and disagree (very rarely, but I feel it’s necessary to mention so that this article doesn’t become too soppy) and while he rolls his eyes at me when I do stupid things (like talk back to directors or scream in his ear), he’s as good at taking jibes aimed at him as he is at dishing them out at me. We give each other shit all the time — mostly about his age and my sex life. One of the best things about him is his openness and belief in the necessity of sharing personal experiences for the greater good, so I loved having this conversation with him after we travelled upstate to take photos on his property in the Catskills of New York. 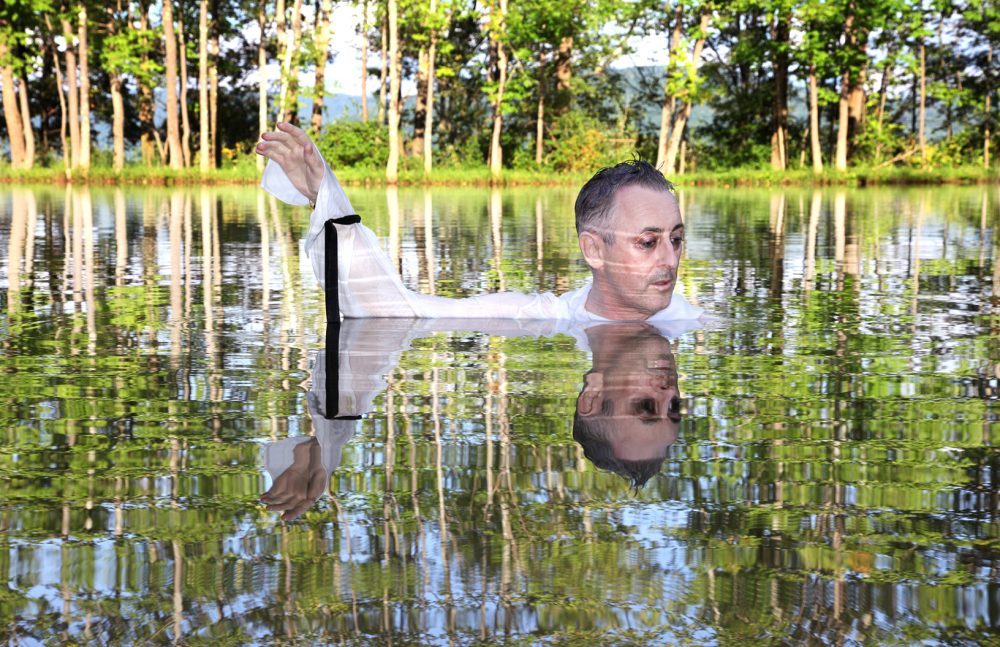 Bojana: When was the first time you put on a dress?

Alan: Oooh, I was about six or seven. There was an older couple who babysat me and they had a dress up box. I have a picture of me with their granddaughter and I’ve got a little dress on.

Did it feel like you were doing something odd?

I looked perfectly happy in the picture, so I didn’t think anything was wrong. It wasn’t until later that I came to realize it was sort of sissy and boys didn’t do that. But the first experience of it was about exploring things that were different to me. And then later I learned that it was weird. I think I’ve always had a good, calm relationship with embracing femininity.

It’s interesting that we even equate dresses with femininity. That’s a modern, westernized perception of that piece of cloth. So many cultures embrace it – Indian, Albanian, Sri Lankan, the ancient Romans, Greeks, Henry VIII wore that thing that looks like an ’80s bubble skirt…

Well with Scottish, a kilt!

It’s actually a very masculine feeling when you’re wearing it. 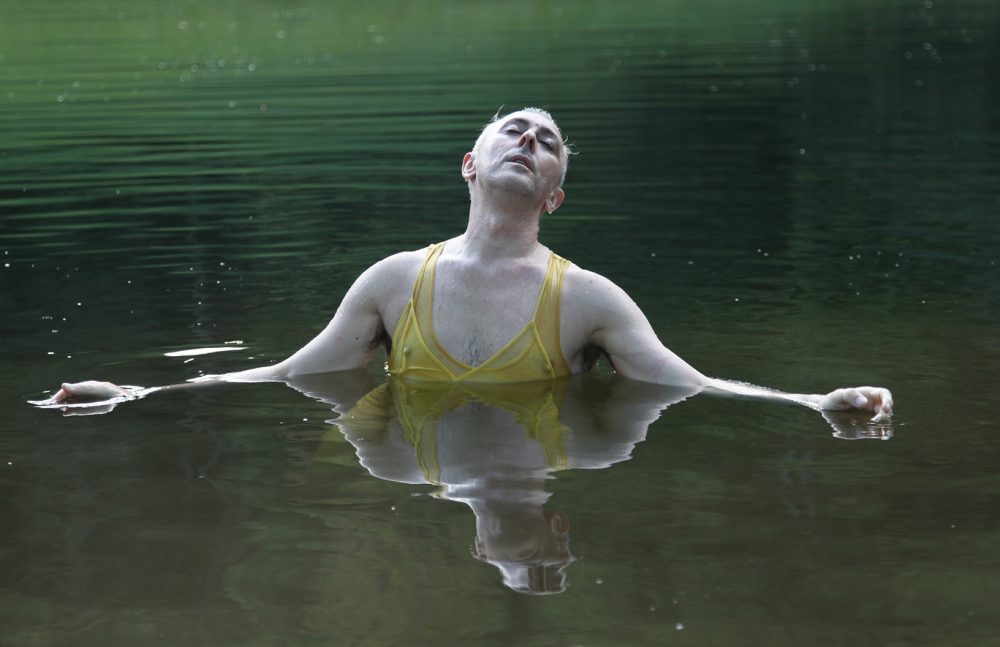 Well, your balls are out there hanging free… I hope that we see more men in dresses. These dresses you wore are big and beautiful. They require a large physical presence to pull them off. Not to say there aren’t women who can do that, but I think it’s really important for men to start wearing dresses so we can see more of it.

Me too. When I did The Runaway, where I played a transvestite, I took away how vulnerable you are in the armour you have to wear as a woman. You can’t run, everything’s encased, you’re in bondage for men. I never forgot it. Of course, that’s why big, flowy dresses are very empowering.

I was expecting a different answer from you about this. I thought it would have been taboo for you the first time, given your upbringing and your father’s abuse. I was going to ask whether you were ever ashamed, but that feels like a redundant question.

I understand shame very, very well. To be a good abuser, you rely on the person you’re abusing being ashamed of themselves being abused. That’s how it works. That’s how it can continue. So, I made a decision in my life from very early on to not live with it. My father told me that I was useless and worthless, and my mum told me I was precious and loved. I couldn’t believe both of them so I had to make up my own mind and I think very early on I found a sense of self. [Are] you gonna cry? 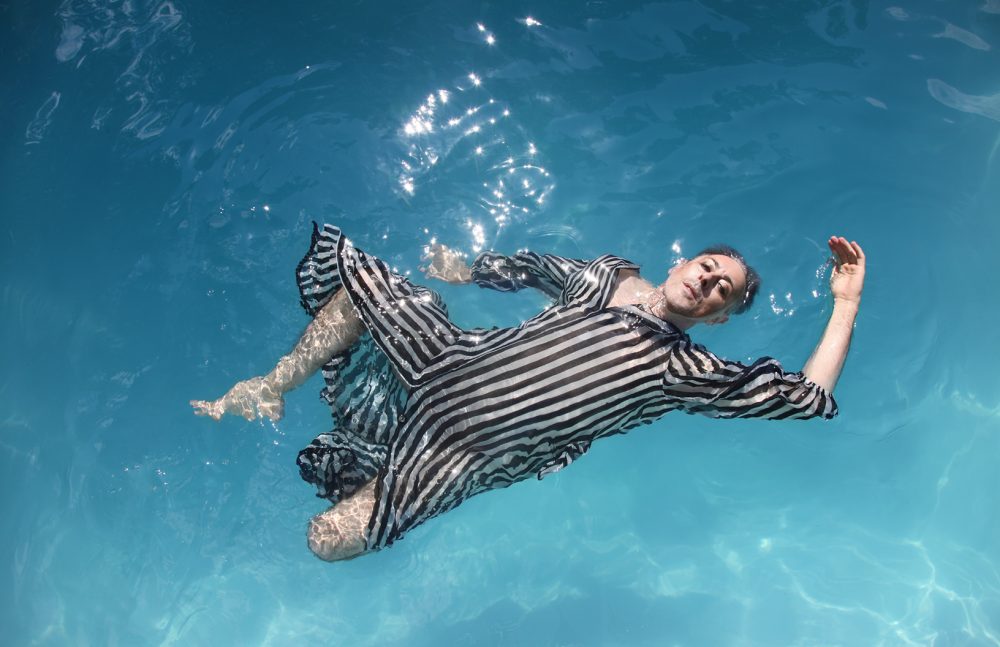 I am crying. It’s overwhelming.

And so a lot of what I to do is to try and make people not have shame about enjoying themselves and being who they are. I’ve also had to deal with shame on a worldwide level about my beliefs, my sexuality, my clothes, and I want to show that I have broken the cycle of shame because so many people are trapped in it. So that’s a really incredible, positive thing to come out of something so terrible.

Alan, where do you get all your energy?

What do you mean?

We work 12 to 14 hour days and you always have something on afterwards, like this interview, or a gig or therapy or a weekend trip to Scotland to accept a Scottish BAFTA and then you come to work on Monday more awake than anyone.

But what does stopping mean?

How many hours a night?

Last night I slept [for] five or six hours. But then I napped several times today. 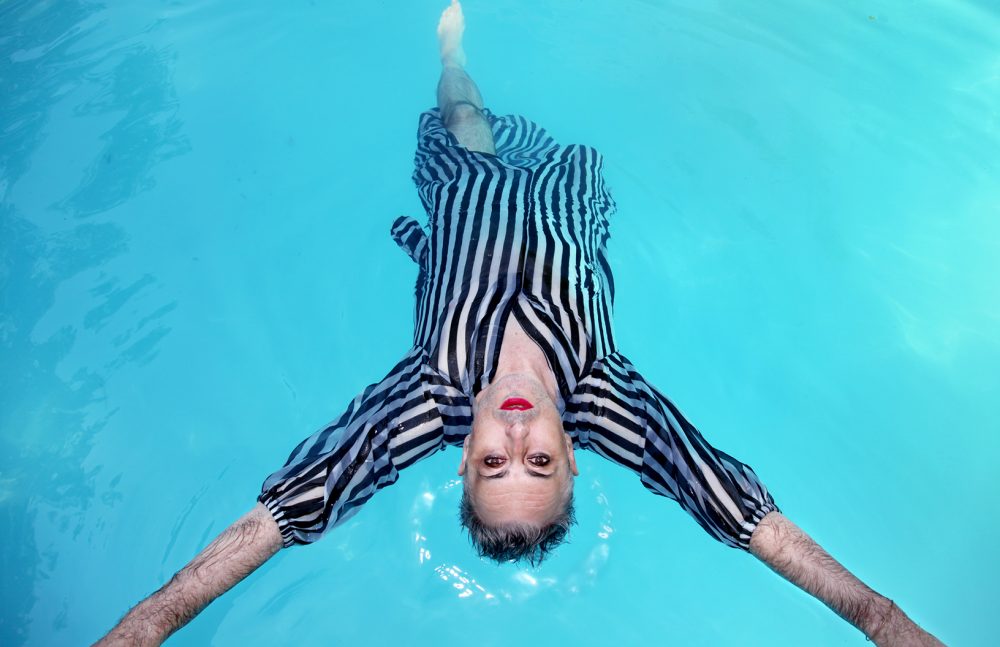 Do you get time for self-reflection?

I think I’m quite good about taking time to think, check in with myself, how I’m doing, how I’m feeling. You know, I have deep depression in my life. There’s mental illness in both sides of my family. I think the worst thing that could happen to me in my life has happened. But the legacy of that will never go away. So I’m constantly checking in with myself and using the time I have to be alive. And also I feel I could go off. I could have a nervous breakdown again sometime. It’s never not a possibility. And it’s not a choice either.

That’s interesting, to understand it as a side effect of living a busy, creative life.

Have one? Absolutely. Well, not now, because I’ve been a bit too safe in the last few years of my life. I got frightened that I was going to have one so I slowed down. But I find what you just said very inspirational. It reminds me of that Bukowski quote. “If you’re going to try, go all the way. Otherwise, don’t even start. This could mean losing girlfriends, wives, relatives and maybe even your mind.” It makes me want to go out and make a bunch of mistakes and live on the edge of my mental capacities. You are uncompromisingly living your life with the full knowledge that a breakdown might happen, because how else are you supposed to live it?

I’m not perfect. I’m not fixed. I’m not above getting depressed. 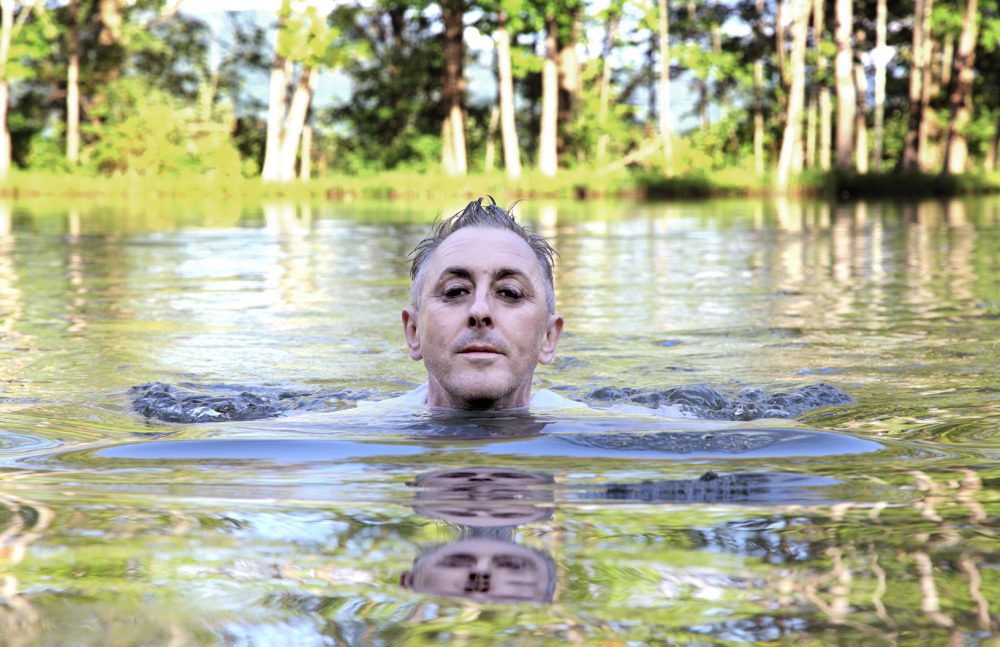 The way you talk about it, I realize that nervous breakdowns can actually be…

And this idea that you’re not supposed to feel that way, or that there’s a better way of dealing…

Who’d have thought that a conversation about dresses would lead us down this path? Let’s bring this full circle. What do you think of the clothes in our show?

One of the big things that I love about our show is the fashion. There was an episode where I had five different coats and there was this freak out about it and I thought: “This is great. I’m a dandy on TV with all these ridiculous outfits.” 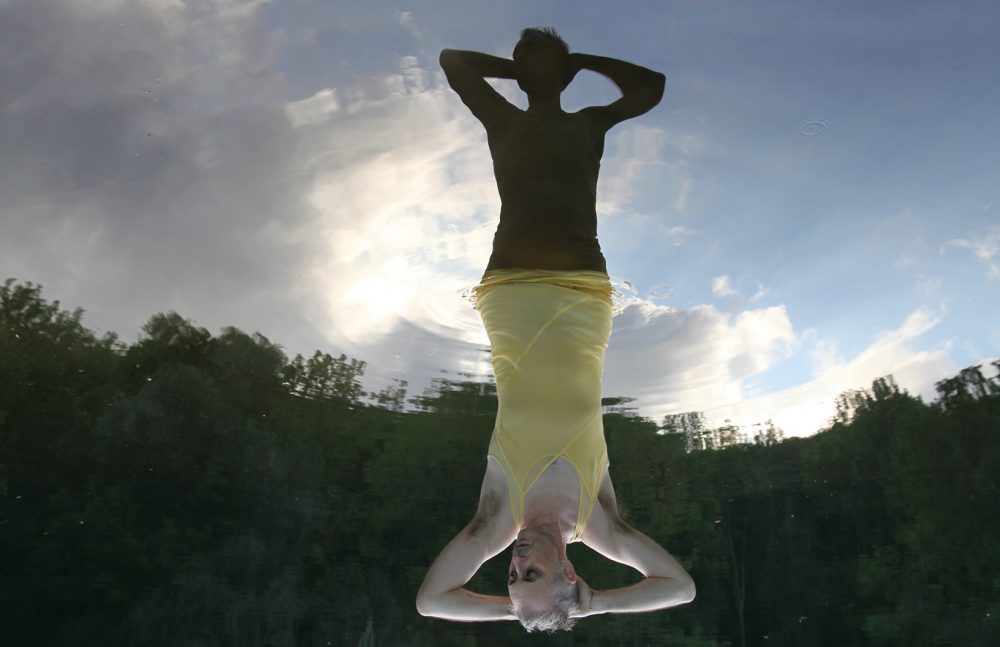 A dandy is someone who expresses themselves through their clothes. Makes an effort to look smart. Has a style that is attention drawing. Dylan dresses up every day, celebrating creativity.

Our show has a leading man who has a husband, rides a Ducati and takes great pride in how he looks. It’s an awesome thing for network TV audiences to engage with.

More people will have seen a same-sex relationship from seeing this show than all the indie films I’ve done about LGBTQ+ issues. And the people we need to be reaching are those people who have not been exposed to stuff like that. They watch this show now. We are in their living rooms.

You know what I love? You are playing a completely unconventional male lead. They could have paired you up with the straightest co-star, yet they choose an unconventional feisty, bossy, talented, emotionally inept woman who hides in work and has no friends other than her work buddies. It’s fun for me being able to do that besides you. She doesn’t exactly make people comfortable.

People are afraid of what they don’t know. It’s why anywhere near water is more likely to be left wing – by dint of their geographical location they are forced to encounter other people, other cultures, and when they are familiar with them they are no longer afraid and so understand and empathize with these people who they perceive as different. I truly believe the way to make the world a fairer, more compassionate place is to ensure that people have access to and experience of what they fear or don’t know. In our own little way, that’s what we are doing with Instinct. The fact that there was no right-wing backlash against a gay leading character in a network drama shows that it works. Just don’t make it a big deal, just be yourself, and people won’t make it a big deal either. It’s kinda simple but it really is true!

‘Instinct‘ second season will return May 27 to CBS.